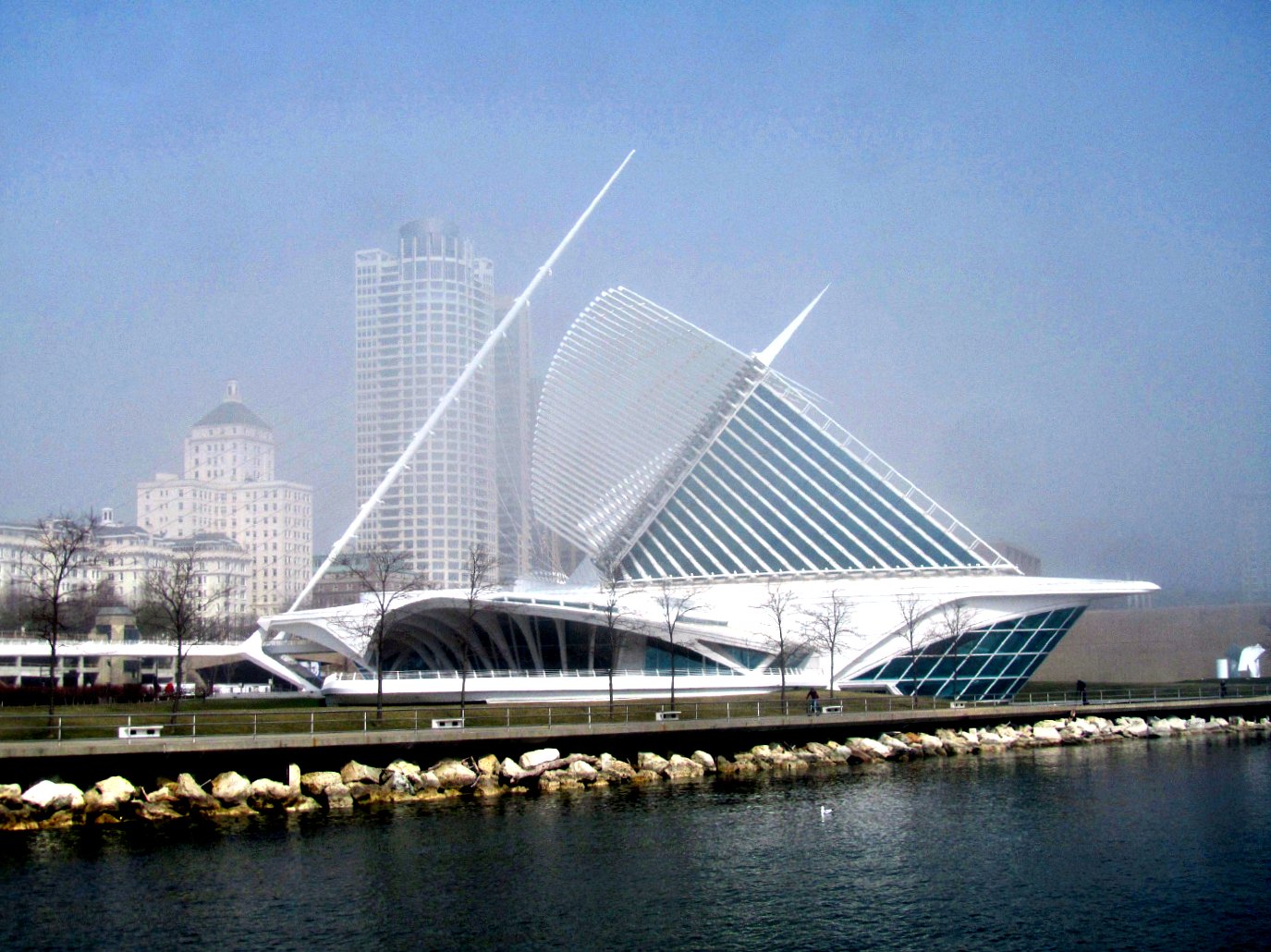 I thought that you browsing visitors might find this list of interest. This post contains the titles of each blog post that I’ve written here, ranked by WordPress according to the number of hits each has received.

So it’s a list of the most popular blogs in descending order. The most hits by far to date was at the home page/archives, representing people checking out my latest posting or searching through the archives, which are listed by months only on the home page sidebar.

So this new list allows a reader a little easier access to the archives. Simply click on any title and you’ll be directed straight to it.

The most popular single post to date is my Moby Dick-like interpretation of Santiago Calatrava’s celebrated addition to the Milwaukee Art Museum (pictured above). I was also happy to see that many culturally attuned people apparently find it significant that Milwaukee has lost its last black talk radio station.

I realize “The Day the United States Hanged a Woman” is a provocative title, but the movie review amounts also to a fascinating true historical story that resonates today, regarding capital punishment.

And the Duane Allman posting is a testament to that great guitarist’s ongoing legacy, evident most notably in the work of Derek Trucks, co-leader of the marvelous Tedeschi-Trucks Band which, in my book, has no peer today among groups attempting to combine and expand on a wide range of roots music styles.
I hope this information helps you to enjoy Culture Currents (Vernaculars Speak) a bit more.
As always, thank you very much for visiting, reading and commenting.
Best,

All Culture Currents postings in order of number of hits (listed after each title):

5. The Day the United States Hanged a Woman

463If These Quilts Could Talk: Signals along the Underground Railroad

436Will the Wolf Survive — or Attack? Examining “The Grey” Controversy

328Rembrandt: Last Chances To See a Life-Changing Work of Art

306A remarkable Mother’s Day story of an unforgettable “Lady” and her gifted son, Arshile Gorky

221The Deadly Attack of the Smart Phone Zombies

173The Magician Behind Miles: Reviving the American Individualism of Gil Evans

116If Dylan wanted to back him up, he must’ve been a hell of a leader. On mountains, he was.

115A graphic version of T. Monk (but not Bud Powell) getting unfairly busted by racist cops…

112Jeffrey Foucault: Songwriter on a Train to You

99An Elegy to a Symphonic Musician — Bill Bennett

81Undecided Voters (in Swing States?): Who Are Those Guys?

77The “Magic Book” of Weather Report and Zawinul interview

71More images from Edward Curtis and The Vanishing Race

69Eagle Wings and Byrd Calls, and a Gust of Defiantly Mystical Romanticism

64A grand dame of jazz presents a celebration of “Dexter Gordon @ 90.”

60The Aura of the African-American in Visual Art and Culture

56They’ve got the back of the Man in Black: Johnny Cash

56Political Call and Response and The Falling Man Who Still Haunts

55The paranoid and racist John Birch Society is alive in new guises.

51Tedeschi Trucks Band – Part 2: A Comparison and a Closer Look

50Following the inextiguishable flight of The Grateful Dead’s “Dark Star”

50Riding with another African American as “guilty” as Trayvon Martin, and Pip

50My Best Jazz Experiences of 2012 (in memory of James Hazard)

49Collage: Piecing Together Snips and Heaps of a Common Cultural Act — in Colorado

46Weather Report: From the First Lightning Bolt to the Rise of a Jazz Tsunami

44Photos That Made History and Make You Remember

43The Adventures of Madame Maggie, or the Return of the Hound of the Baskervilles.

42Levon Helm and The Band: A Speculative Fictional Fragment and a Tribute

38Guy Clark and Darrell Scott: Country Troubadours for Our Times

37Stepping Inside the Outside the Box New Music Festival

37My best albums of 2012 in roots vernacular music

32A Musical Meditation on Honor and Barack Obama

30Rediscovering a Cezanne Chateau in my Basement

30Three Decisive Days of the Civil War, 150 years ago this week

30Paul Ryan: The Story of the Peanut Butter-munching Automaton and his Granny

25Rodney Crowell’s long and winding road back to Emmylou

24Antler reaches for sky-born ideas and touches people down here

23Is She Safe Because Buddha is on the Smart Phone?

22P.S. On Trayvon Martin post. Is Zimmerman a provoker or a victim? (Give us The Watchman!)

22Riding with another African American as “guilty” as Trayvon Martin, and Pip

20Inside a real wild animal sanctuary

19Did I see yo mammy steal somebody’s Grammy? Kudos and Komplaints

19Toni Morrison on Melville and the Language of Denial

18On 9/11 Anniversary: How Another City Survived its own Fallen Men (Women and Children)

18Five Visionary Musicians Travel to the Apocalypse and Beyond

17Another list of ideas for action from Walter Mosley

17The Tedeschi Trucks Band: As Timeless as the Red Rocks of Colorado

17P.S. On Trayvon Martin post. Is Zimmerman a provoker or a victim? (Give us The Watchman!)

17A Coen Brothers movie reaches for a rootsy wrinkle in time

16A Walmart Cinderella Sweeps Up on Desolation Row

15“Trains That Passed in the Night” — How photographer O. Winston Link told a classic American story

14Wall Street on the Edge: A Deadly Margin for Error

14The Flatlanders head for the hills, or was it for a sure-bet payday?

14A very brief photo essay on driving into Appalachia

14How can the government be everywhere stealing our guns, Senator Lee?

12Does Marion Cotillard forge an anti-Ahab heroine for our time in “Rust and Bone”?

12While Republicans filibuster (and fiddle), the grieving wall of Newtown may come to life

12You Doubt Ryan Thinks of Humans as Mathematical Digits?

12Thoughts of a saddened and bemused Bee Gees fan from 1967

12Another trip, with abundant comic relief from politics and other ugly human doings

11WORDS, SOUNDS AND IMAGES OF COMMON (AND UNCOMMON) CULTURE

9Digging (up) the Year’s Vernaculars, Roots and All

9Two Guys and Their Guitars

8Another dose of too-slippery-to-peg Americana

8A few thoughts on “Take Five.”

7Getting down off your horse and savin’ a little face is as American as apple pie in the face.

7Fair is Foul and Foul is Fair. Hover through the Fog and Filthy Air!

7A Gust of Cooling Emily Dickinson

7Amiri Baraka: A Native Son of Racial Reality and Necessity

4As Mittor Romsa awoke one morning from uneasy dreams…

4Something to do, to be responsible for.

3Happy About a Hanging?

3Does Walker walk the walk, too? Nah, he just pushes a pile he treats like garbage (cartoon by Kevin Lynch).

2What’s Scott Walker up to now?