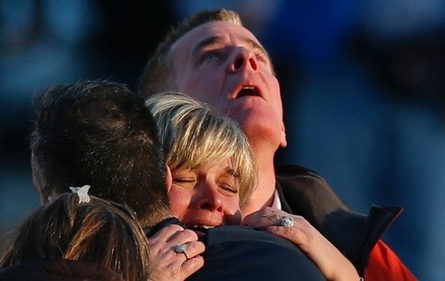 Like so many, I’d love to change the Second Amendment’s “right to bear arms,” but saving more innocent people from random gun violence will take more than that. Laws would not stop outlaws or disturbed people, although stricter gun registration would logically help restrict the odds of tragedies continuing.

But the problem is deep-rooted and our peculiar American culture must change because this is a self-perpetuating view of “reality,” in the sense that a certain percentage of people in America are still cultivated to our self-destructive Wild West mentality of protecting oneself and one’s property with a gun. The powerful NRA gun lobby has saturated much of our mainstream politics with its influence, and contorted, stuck-in-the-mud-with-my-gun rationalizations for “let ’em be” firearms laws. And gun sales have flourished, partly from reactive fear of whatever the future might bring.

That’s why Garry Wills’ essay is so insightful and I think important for everyone — and especially for conservatives of conscience — to read and consider, because much of their moral grounding is Bible based. Wills’ argument derives from the Bible as well, so it’s an argument that might speak to them and break the stasis of dialogue that we suffer from today, between secular liberal and evangelical conservative mindsets.

He speaks of the evil Old Testament god named Moloch and it’s important to understand our culture through such mythology which reveals truth and archetypes of the American sense of self, for better and worse.

Wills understands the American Christian mentality as well is anyone, as he demonstrated in his wonderful book Head and Heart: American Christianities. Among other things, it probed the oppressive darkness of America’s Puritan psyche, which retains a strong grip on our collective psychosis as a culture.

In that book, he notes America’s elevation of the value of “individualism” – a word our ancestors did not even possess, a term “which we have created for our own use.”

Wills quotes the first great observer of America, Alexis de Tocqueville: “Egoism dries up the very seed of every virtue; individualism initially crushes only the impulses to public virtue, for over time it turns on and obliterates every other virtue and at last it disappears into egoism.”

Wills continues, this antisocial urge could be blunted by “the individual’s partial re-entry into society by way of voluntary associations, which served as buffers between the individual and the state” (Wills, Head and Heart, 79)

The problem is that we have turned the urge into a sunny virtue, erased the negative meaning and made “rugged individualism” more of an ideal principle of the American way of life.

The way we allow leeway for vigilante gunner rationalizations — like George Zimmerman’s about killing Trayvon Martin – is also symptomatic.

Another problem I see is the pervasiveness of broken families in America. It’s unclear whether the socially misfit Newtown mass murderer Adam Lanza had paternal guidance from his divorced father, or from his parents as a coherent and supportive familial unit. And his murdered mother’s Wild West zeal for guns surely facilitated the tragedy. She would have seemed to suffer from the Moloch mentality that Wills writes about in his New York Review of Books blog.

Wills’ other books include What Paul Meant and What Jesus Meant, which show his knowledge of biblical literature and its significance to us today. Then there’s his Pulitzer Prize-winning Lincoln at Gettysburg, which reveals his insights into the wisdom, challenges and leadership of our greatest American president at the peak moment of our most violent historical crisis, which, of course, resonates to the present, as Stephen Spielberg’s new Lincoln film underscores.

Due to Wills’ deep historical erudition, the blog essay is somewhat high-toned and didactic, but as often it’s powerfully pointed. I think many of the people who have already commented on it do get it and have very good down-to-earth responses and ideas which show that Americans can address this profound and festering problem.