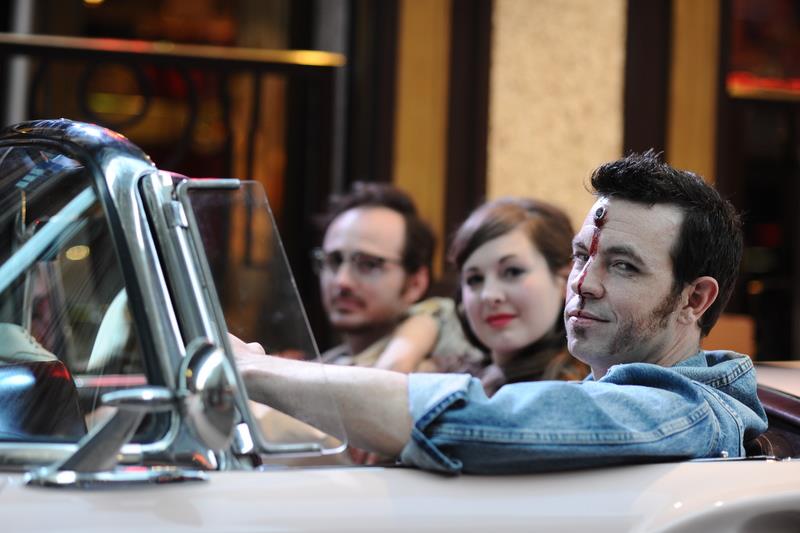 “Rain on the scarecrow, blood on the plow.” The image from 1985 shows John Mellencamp’s knack for literary horror, 15 years before he began writing a musical with iconic horror writer Stephen King. The song about a dying Heartland farm was one of the singer-songwriter’s first indelible artistic statements. Some years ago, Mellencamp bought a lake cabin which turned out to be allegedly haunted — by accidental deaths and restless spirits — the inspiration for Ghost Brothers of Darkland County, the ambitious stage production that will come to Fort Wayne (Embassy Theatre) Oct. 24, Madison (Overture Center)  Oct. 25. Rockford Oct. 26 (Coronado Theatre), Milwaukee (Riverside Theatre) on October 29 and Minneapolis (State Theatre)  Oct, 31, then on to Iowa.

Not surprisingly Mellencamp is a Stephen King fan and he approached King with the idea of doing a libretto for what became a “live radio musical,” says Ghost Brothers director Susan Booth. The story’s key dynamic is two mirroring male relationships — dead brothers who haunt their living nephews in a Southern Gothic atmosphere of poisoned character entanglement.

The story of jealousy, murder and suicide is set in a Mississippi cabin “haunted by the ghosts of people that had a terrible thing happen,” King said. “Because it is so awful, their spirits stayed there, and then the whole chain of events starts to repeat itself.”

This all grew from a working relationship of two symbolic blood brothers. King’s prolific literary sensibility rises relentlessly like a specter from the darkest shadows of the American experience. King’s also an amateur musician, and a roots music aficionado.

“The greatest thing about Ghost Brothers is my friendship with Steve King,” Mellencamp said in an interview with The Tennessean in Nashville. “He and I are like brothers. In 15 years, I don’t think we’ve had a cross word. We laugh at each other and teased each other quite a lot, but never has there been any kind of, I’m really mad about this.”

The project also marked the reunion of two estranged brothers, Dave and Phil Alvin who perform on the recording. However, the biography John Mellencamp: Born in a Small Town details his problematic issues with collaboration.

“I don’t play well with the other kids, and neither did Steve,” Mellencamp admits. “Steve lives in Maine by himself. I live in Indiana by myself so the idea of him and I working together doesn’t sound like it would work very well, both of us are very respectful of each other, and it’s worked fantastically.”

That almost ominous isolation belies the charisma and strong connections of their individual talents, which attracted an all-star cast recording. That includes Mellencamp’s current girlfriend, Meg Ryan, as Monique, the mother of the living brothers.

The third member of the dead uncle’s love triangle is Anna sung by the silver-throated Neko Case. One of the first really gripping songs is “Wrong Wrong Wrong About Me” by “The Shape” a ghostly figure sung by Elvis Costello with Marc Ribot’s far-eastern psychedelic guitar backwash.

Frank and Drake argue in roles by actors Matthew McConaughey and Hamish Linklater. The ironic “Brotherly Love” moves with the shambling funkiness characteristic of Mellencamp’s recent work, with  singer-songwriter Ryan Bingham (Oscar-winner for Crazy Heart) and Will Daily, as the brothers.

A spectral aura deepens when Kris Kristofferson, as the father Joe, sings “How Many Days.” Joe’s the younger brother of the two dead uncles and the father of Frank and Drake,. “Home Again” quivers with a winsome lyrical soulfulness in a four-part harmony among Sheryl Crow, Taj Mahal and the Alvin brothers.

On “You are Blind” gravel-throated Ryan Bingham as Drake reflects on his love for the woman he shares with his brother.

Kristofferson’s father Frank begins to tell his story and Taj Mahal invokes chaos in “Tear This Cabin Down,” to convey the horror of the murder site.

Joe continues story about brothers “who couldn’t get along.” in 1967 when it happened. 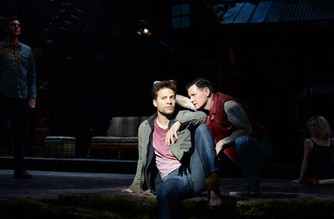 A brotherly heart to heart may not deter tragic fate. Courtesy mediagalleryusatoday.com

Sung by young Clyde Mulroney, “My Name is Joe,” is a touchingly plainitive flashback ode about the father as a boy and “the runt to the family,” whose big brothers “will take care of me.” Later Roseanne Cash sing Monique’s song “You Don’t Know Me” which reveals how love is ravaged by tragedy and misunderstand, yet a forgiveness persists.

And yet  the dead brothers’ mother Jenna can only ponder, “It all goes so fast and it’s all so rich, life I mean, and love. It slips away from this world, like silk.” She calls out for Andy and Jack, “where did you go?” a sentiment superbly expressed by Sheryl Crow in “Away From This World.”

Finally the song “Truth” is a stirring, swelling ensemble song with Mellencamp having the final musical word.

Taken as a whole, the recording sprawls but it hangs together like a dark, engulfing cloud of inevitability, with committed performances and excellent music.

The touring cast has some of its own star-power but promises proven acting and musical chops. Ghost Brothers should be more compelling as a dramatic story line on stage. The show stars actor Bruce Greenwood as the father Joe McCandless. Greenwood is perhaps best known for his roles as JFK in the film Thirteen Days, in Flight as Denzel Washington’s friend and union rep, and as Captain Christopher Pike in the 2009 Star Trek film and its sequel, Star Trek Into Darkness. Broadway actress Emily Skinner, who plays Monique, received a Tony Award nomination for Side Show, and has had leading roles in Jekyll & Hyde, James Joyce’s The Dead, The Full Monty and Billy Elliot.

Both the ghostly uncles and the nephews vie for the hearts of a woman: One is Anna, played by Kylie Brown, who has recently appeared in Atlanta productions of Hello Dolly and Hair. The other, Jenna, is played by Kate Ferber, whose recent credits include the one-woman show One Child Born: The Music of Laura Nyro.
The Shape, a devil-like character, is played by Jake LaBotz, who is a blues singer-songwriter and has acted in films by Sylvester Stallone and Steve Buscemi. LaBotz has released six of his own albums. 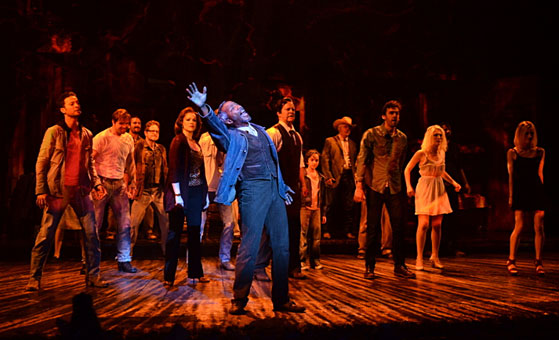 The Shape casts a bluesy spell over the people of Darkland County. 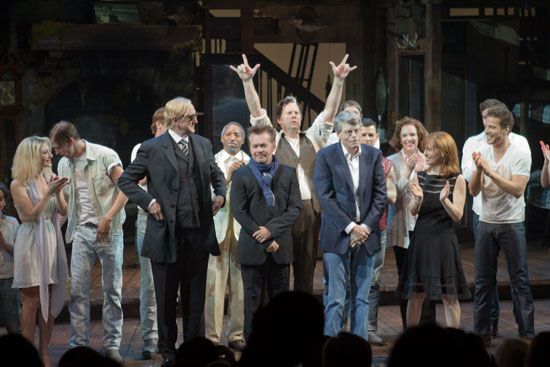 The libretto’s shades of Tennessee Williams, William Faulkner and perhaps Carson McCullers underscore that King is a more subtle psychological writer than often given credit for. Typically penetrating lyrics and memorable refrains by Mellencamp reflect a theme of suffering, resilience and self-acceptance in the face of fate.

Booth says the gritty, low production values “allows us to sit and listen to Stephen’s words and plug our imagination in, rather than having the work done for us by a fully stage production.”

The photos in this blog are from a previous production of “Ghost Brothers.”

A version of this story was published in The Shepherd Express.