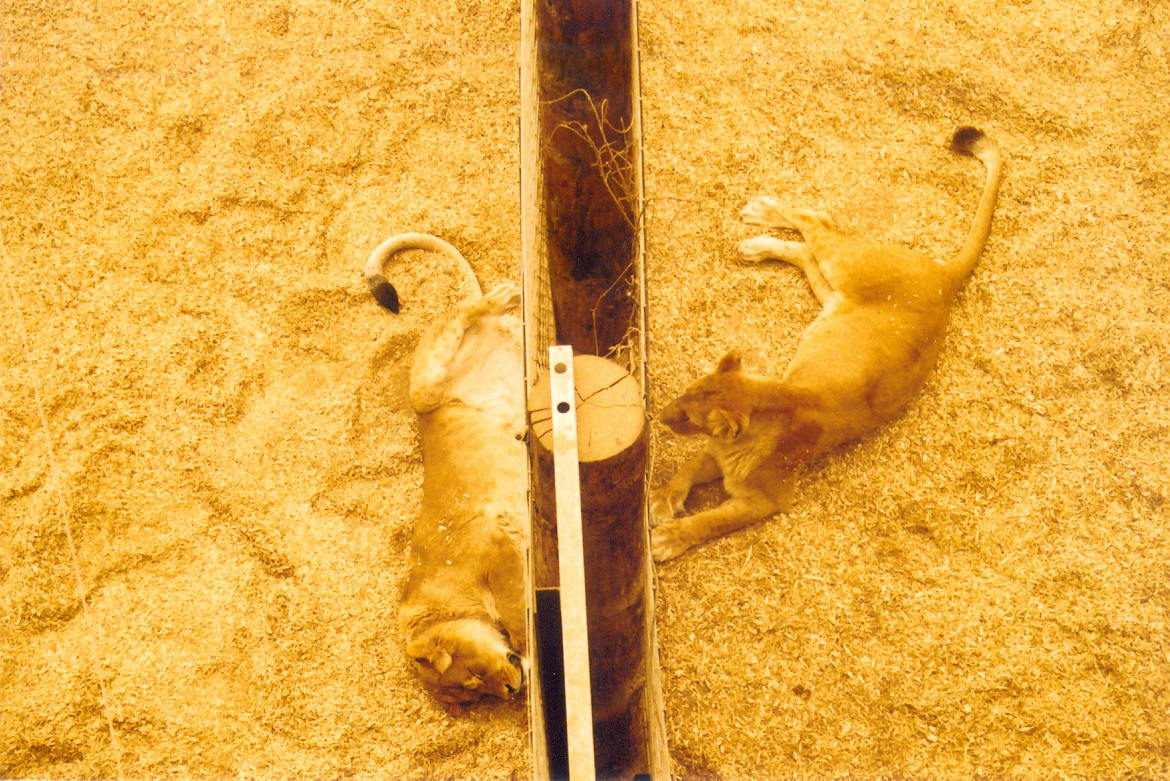 When the stars threw down their spears,

and water’d heaven with their tears,

Did he smile his work to see?

Did he who made the Lamb make thee?

in the forests of the night,

what immortal hand or eye,

– from “The  Tyger” by William Blake, Songs of Experience 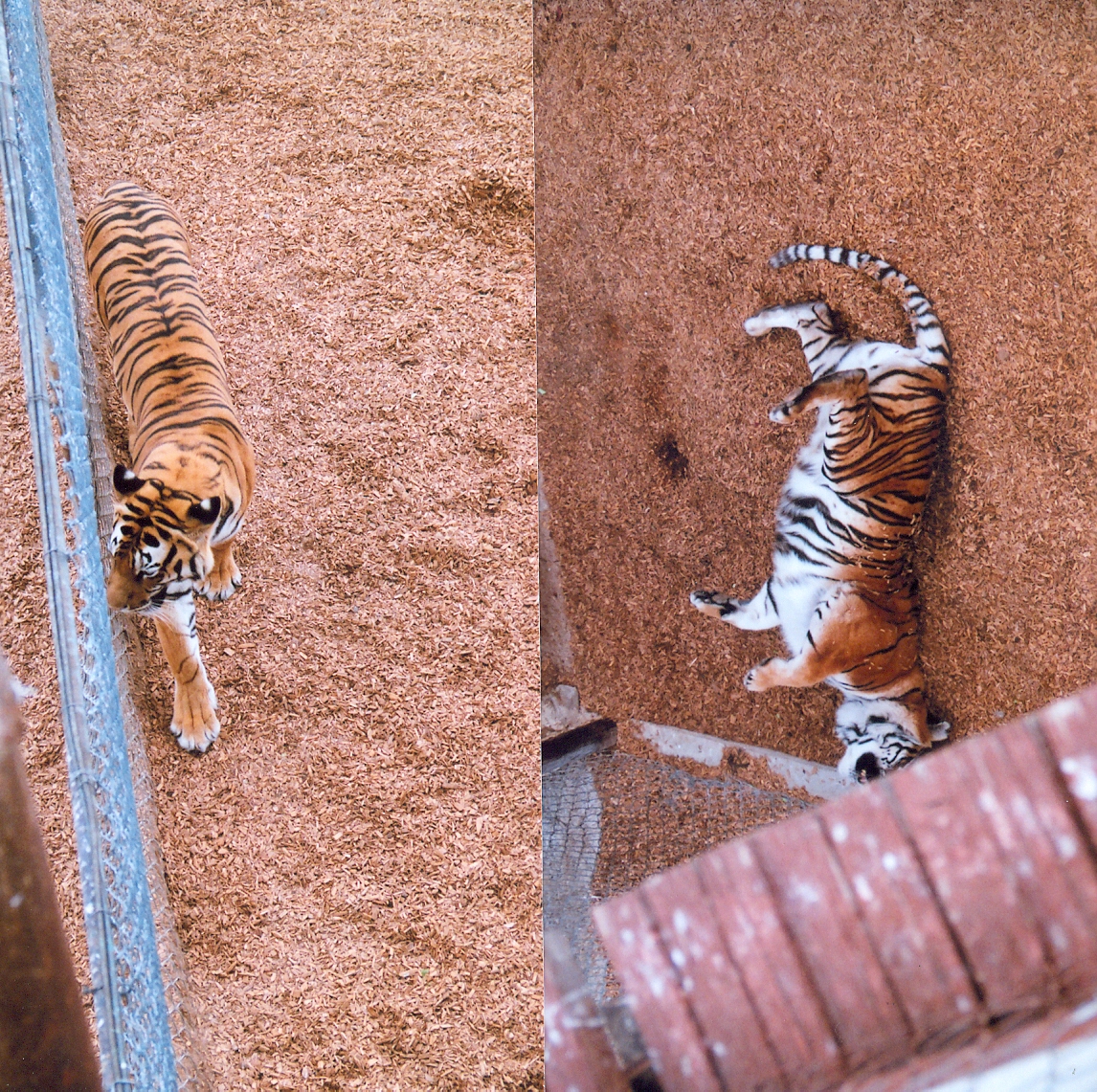 Keenburg, CO —  The tiger’s nine-foot-long body pulses and twitches with power, sinew and ferocity. It turns and strides stealthily back, and then turns to pace, again and again. I see many large carnivorous creatures on this day. But the tiger alone makes me shudder. Almost any of the nearly 300 animals viewable at The Wild Animal Sanctuary could kill me, if they were hungry enough and I vulnerable enough.

The huge, relentless tigers are unmistakably the most lethal athletes among the wild creatures. On this 90-ish degree day most of the other animals lie under shade spots. But the new tigers pace and pace. My witness to this extraordinary facility is not to evoke fear — rather respect for these astonishing creatures. And the tiger in its lithe grandiosity and gold-orange and black stripes coat is as beautiful as it intimidating. And here is where Blake’s sense of wonder is so apt.

These mighty cats had recently been rescued and were still in relatively enclosed quarters, until they grow accustomed to the sanctuary environment. Then they will be released into the tiger potion of the facility’s 720-acre refuge, located about 40 miles west of Boulder.

Understand how special this place is. You can view virtually all of those acres thanks to the sanctuary’s design. A mile-long walkway — perhaps 35 feet above the wildlife terrain — traverses the vast facility. 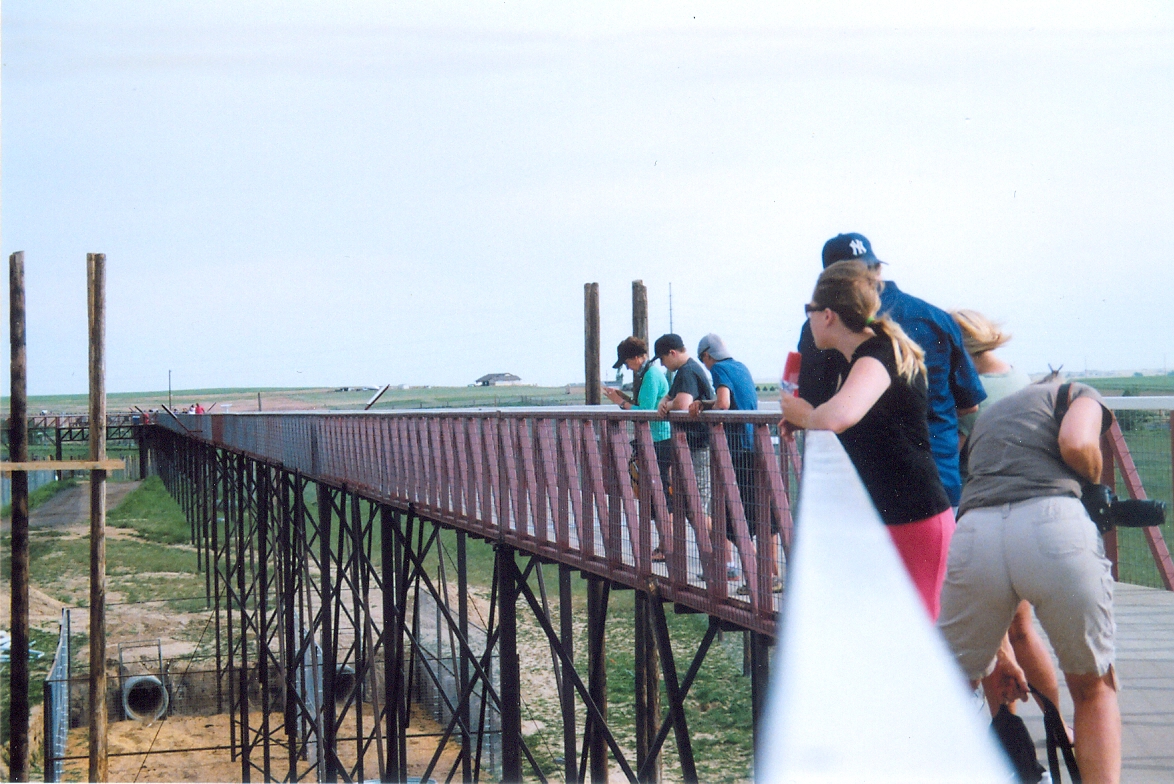 Here’s a portion of the 1 mile-long walk way over the wild animal sanctuary.

Perhaps you’ll get somewhat closer to such species in a conventional zoo. But here they are given a free, natural reign, perhaps as well as humans have devised to date. In a sense, you have the safe, voyeuristic ability of a bird hovering over the African Serengeti, or the great North Woods inhabited by wolves or Grizzlies. Or in the wilds of Alaska, where suddenly you look down and spy a massive Klondike bear lolling contentedly or roaming through easily crushed forest thickets for a meal.

This organization does not capture wild animals. All the creatures are rescued or legally confiscated from situations and entrapments where misguided or abusive humans had the animals. Or from circuses that have poorly-cared-for animals including from Bolivia, whose circuses were outlawed from using live animals.

And after seeing the unnerving new tigers, the sight of the lions was stunning — they appeared still as if carved granite. They rested in their prairie, one completely alone, its magisterial shape and mane declaring his rule of the domain. But as I peer more closely I notice an unmistakably rich tawniness in their massive necklaces of fur. 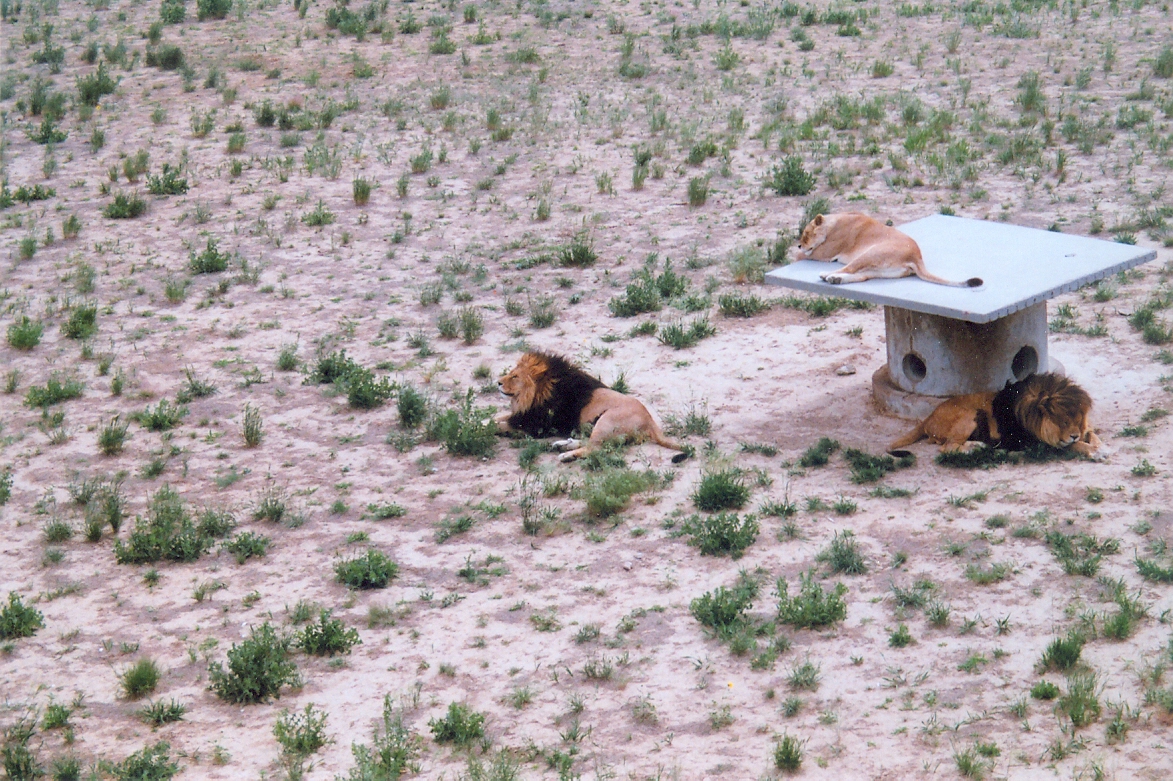 Like the tiger, the lion has a severe degree of beauty that rivals its fearsomeness.

I begin to realize some of the psychological effect of seeing large wild animals that could tear me to Kevin tenders. Here’s one startling difference between a wild animal sanctuary and a conventional zoo.

The zoo allows the viewer to scrutinize the animal in a dispassionate and objective manner, as a scientist might. That can be valuable within the limits of that viewpoint, for the human at least. It’s because you presume a posture of existential imperviousness and do not experience it as a truly wild animal. It is in captivity and relatively safe.

But the safeness here is merely you from it — physically. The human design providing safety does not entrap the acclimated inhabitants which, I then realized, was surely part of the encaged new tiger’s restlessness.

But those new tigers are promised a provisional freedom to roam and behave as they would in their natural home except without other large living animals to prey upon, thanks to the fencing layout.

You gaze in a sort of literal suspended animation. It’s as if you are in a different time and space from the animal, and you are. They can’t touch you despite your relative proximity. And though you experientially share the animal’s time in its presence, which is rendered irrelevant for avoiding the “nasty, brutish and short” time it would take the carnivore to track you down and pounce on your neck. One supposes philosopher Thomas Hobbes might have come up with his famous adjectives regarding the survival of the fittest, in precisely a place like this.

On the other hand, if it seems peculiar contemplating philosophy of life and death amid wild meat-eaters rather than with Homo sapiens, it may be because philosophy tends to be — like so many other of our activities – human-centric, unless you’re a bioethicist or a staff member of a place like this. 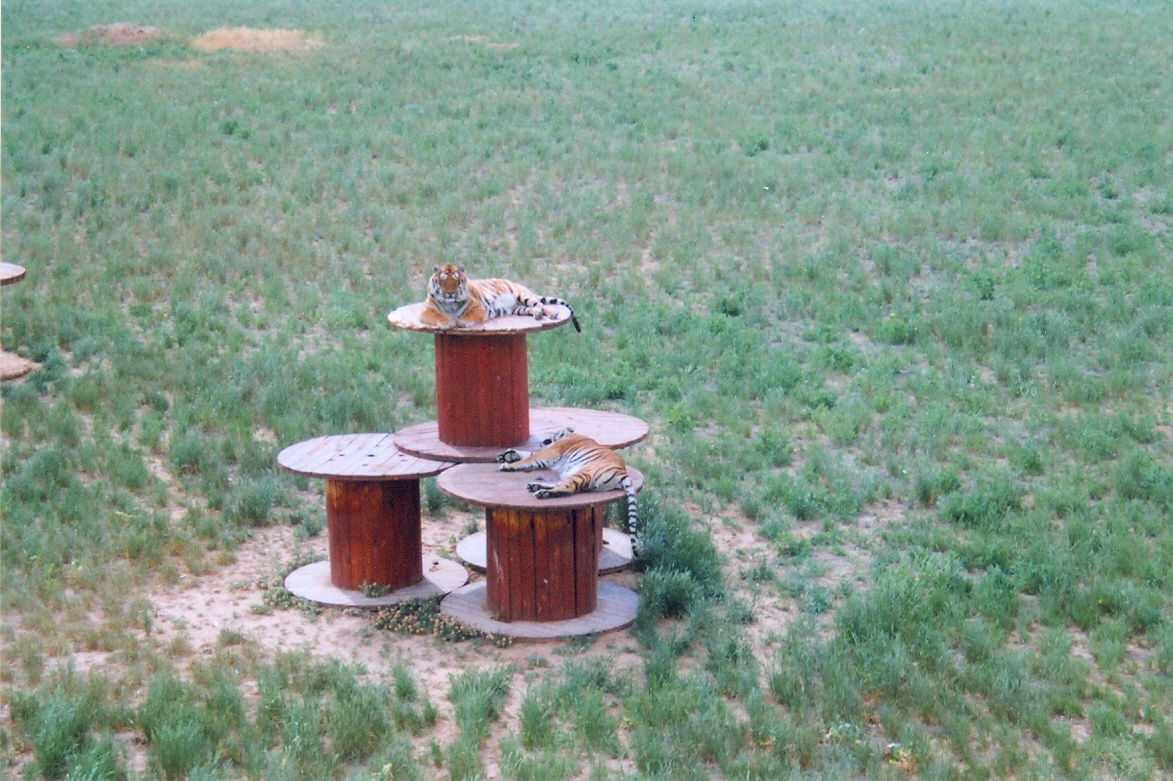 The regal resident tigers love to loll and Lord over the sanctuary.

So I stand there with a fresh appreciation of the experience as I watch the acclimated tigers lounging on wooden stands that provide shade and high points from which to lord over — not unlike your adorable house cat perched atop your dining room armoire. These tigers look utterly relaxed, so it follows that they’re mentally and psychologically healthier than the nearby new tigers.

One lies on its back, its limbs sprawling in space like a furry astronaut in free fall. Then his head swivels and he sees me (left, above). I wonder what’s going through his brain because his eyes fix on mine, or perhaps on me. I gulp like a cartoon character. In the same moment, I feel certain affection for him. As with the others, I see the unfettered beauty of this creature — in the depth of his glimmering eyes and wondrous shades of grey in his fur.  A short walk further brings me above two timber wolves. I focus my binoculars and my eyes plunge into the wonder of their deeply textured presence. The wind rustles the charcoal and sienna fur, changing its colors as a painter waving an invisible brush over them.

They are alive and at peace, and so am I.

Another creature is not so comfortable; or rather he’s getting there, slowly.

An attendant tells me this is a new Kodiak bear, named Max. He weighs 1,700 pounds. The sun is merciless. But he’s partially submerged in a tub of water with a stream flying over his landscape of a torso. 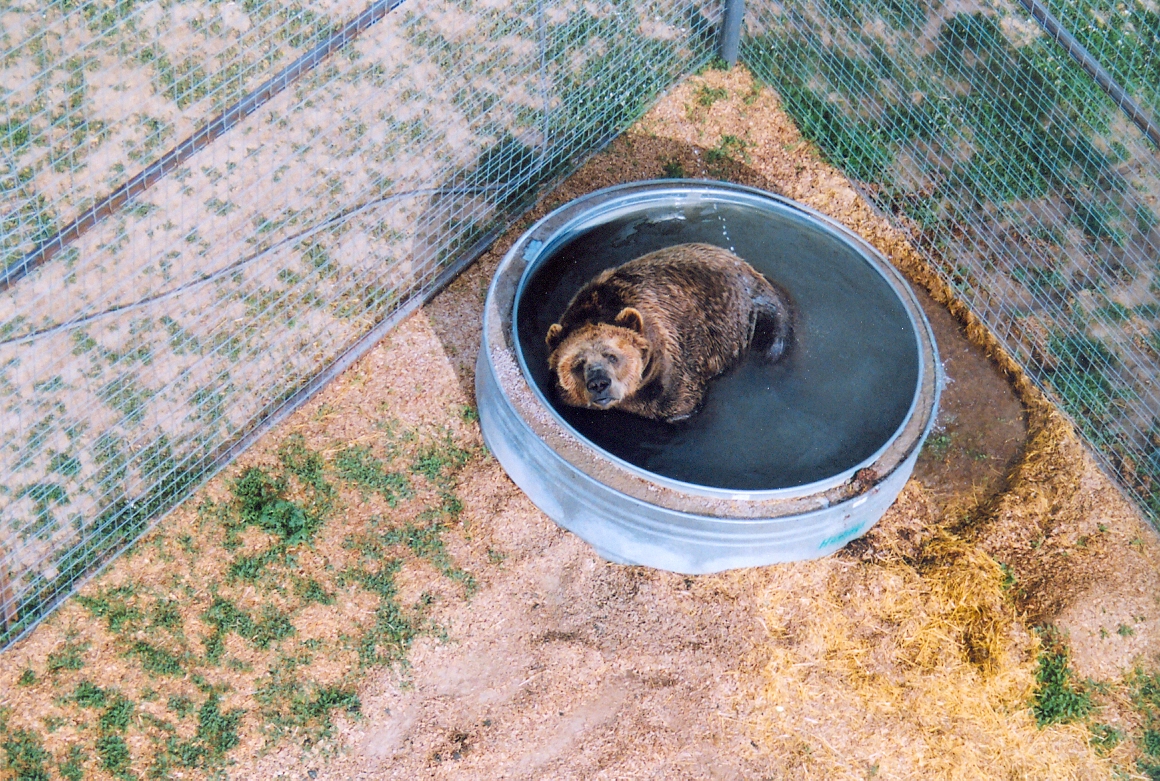 Max, the new Klondike bear at the sanctuary, cooling his jets.

You have to wonder what doofus captor allowed Max to gorge on what mountains of junk to reach this grotesque weight. He probably thought it was cute. The world’s largest teddy bear.

The poor guy heaves ponderously with each breath and admittedly has an almost doll-like circular face despite his ungainly girth. Max looks up at me and now I feel more pity than fear. I sense that if he’s released to the wild he probably becomes easy prey, because of his obesity. So he seems to inhabit the best of all possible worlds, right now.

A red tree fox here was born blind, and was unable to survive in the wild, but he now uses his senses of smell, touch and hearing, and can run and play with other animals, the attendant says. 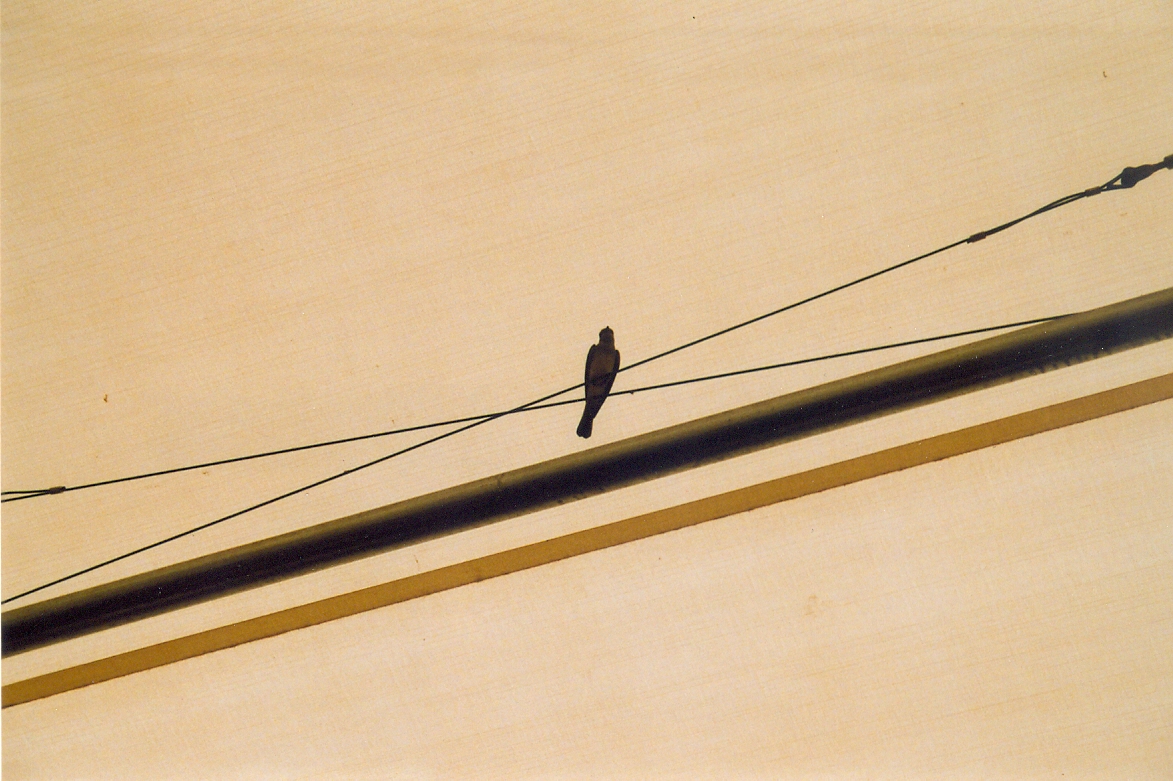 Some of the wild animals at the sanctuary in Colorado a very acclimated to the sanctuaries environment. Of course she (above) can go virtually anywhere she wants to, like under the cool concession-area canopy.

— All photos by Kevin Lynch

Signs along the way explain circumstances of rescue. One woman bought a wolf and tried to breed it with a dog to tame it, then gave it to someone as a gift. The experiment failed. In another instance, African lions were kept in tiny circus cages for years. They kept having stillborn offspring due to no contraceptives and a lack of proper nutrition. Another woman kept two large wild cats in the small basement of her New York apartment building.

It is always a question of honoring the animals’ well-being as we always presume to prioritize our own, often at the expense of other living beings.

One rule here is: No dogs allowed. One can imagine what chaos a bark-happy dog might create in this fully open air environment.

As I walk back to the entrance, a water truck pumps hydration into the new tiger cages. Two new black leopards lie suspended above them – only a few feet below me – but secure in a small cage. Hues of red in their exquisite coats glisten in the sun. I hope to return when they too feel at home here.

2 thoughts on “Inside a real wild animal sanctuary”