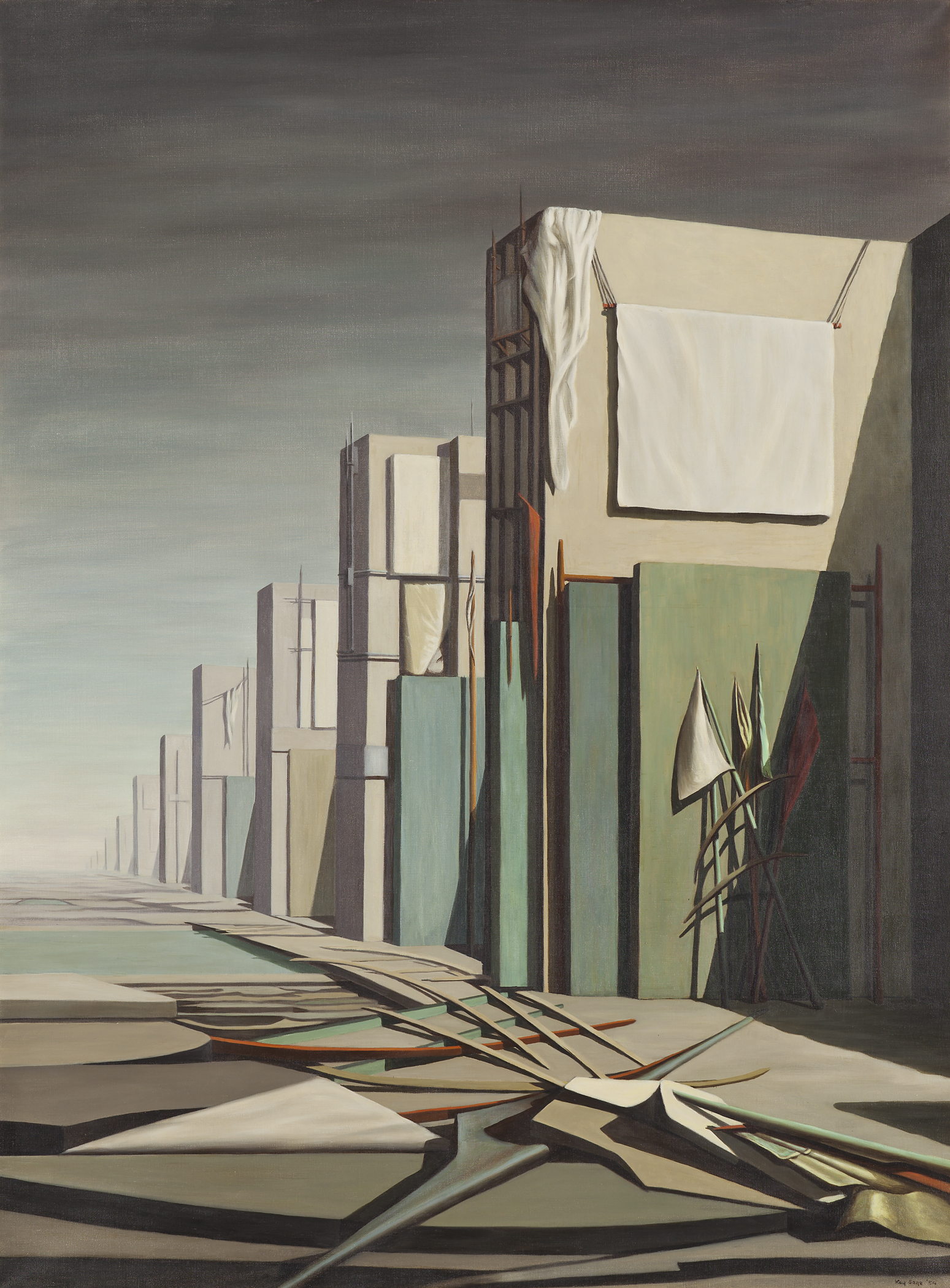 American painter Kaye Sage blends symbolic abstraction with a Surrealist dreamscape in “No Passing” from 1954, on display in “Real Surreal.”

But is real American art also surreal? That underlying question of Real/Surreal is a good reason to see this show, aside from its fun-house array of conceptual, psychological and artistic pleasures. Many of these artists’ interests parallel psychiatry and psychology –asking one to inwardly question, probe one’s past or self-assurance or – one’s subconscious fears, and dreams.

Surrealism dominated European modernist art of the ‘30s and ‘40s, and many Surrealists moved to America and would deeply influence American abstract expressionism’s intuitive spontaneity. But this show represents primarily how Surrealism weirdly adulterated the intent and act of realistic representation, well past WWII.

Federico Castellon’s 1938 painting “The Dark Figure” depicts his own dazed and disembodied head amid a configuration of limbs, and an enigmatic woman engulfed in black, their flesh rendered with a chilling bloodlessness. 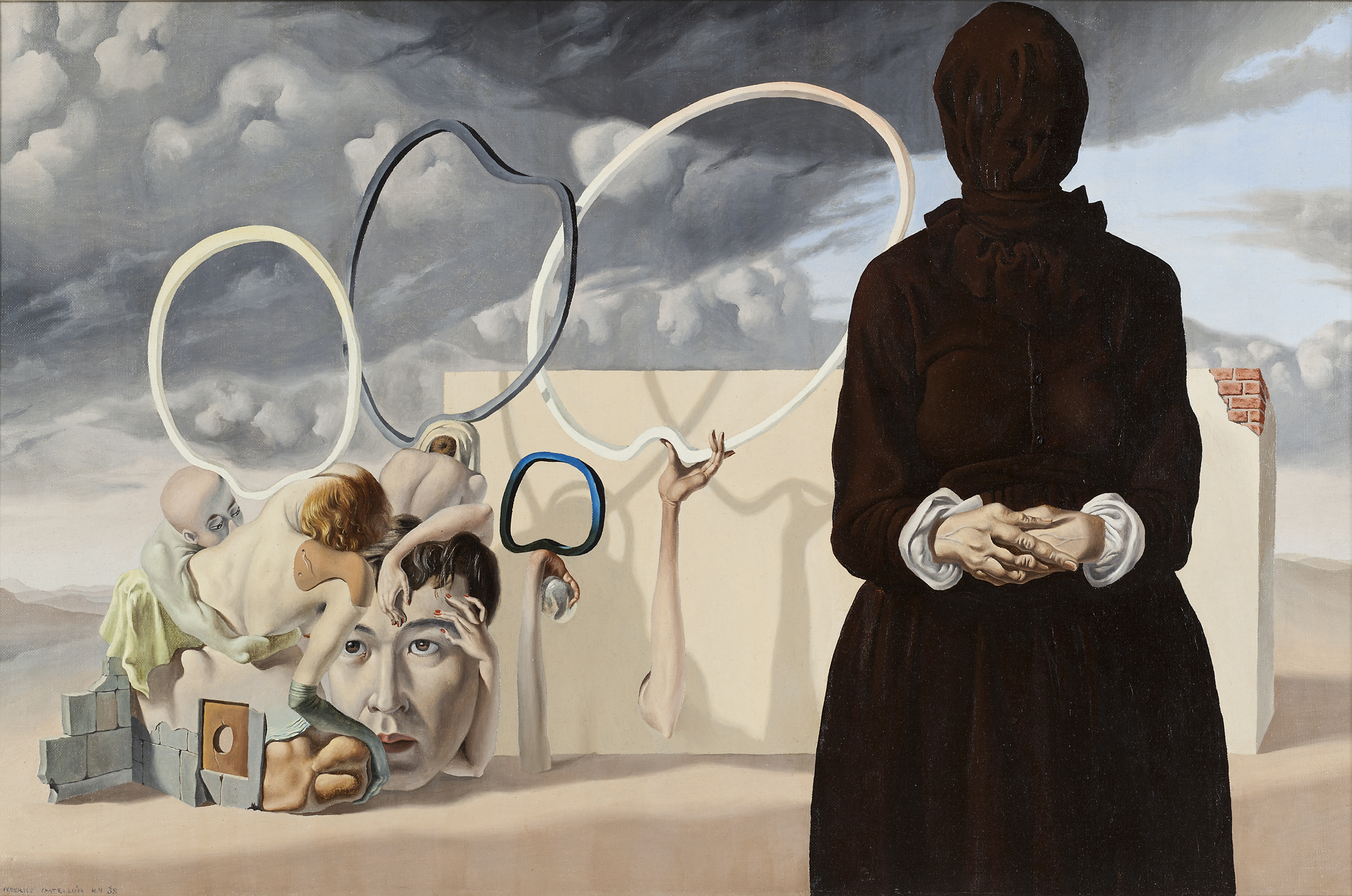 More intriguing are artists who walk a finer line between realism and the psychological edge. Joe Jones’ Depression-era “American Farm” shows a meager homestead atop a cloud-shrouded hill, which resembles a voracious tidal wave about to devour the farm.

George Tooker superbly calibrates his 1950 tempera “The Subway.” A worried woman stands surrounded by various men — some with undead-like, lidded eyes, others peering anxiously from alcoves, and one man weeps against a wall. Both moving and unsettling, the painting blends fragments of multiple stories, feeling like a metaphor for American societal angst and isolation, even amid many people, a not-uncommon subway experience. 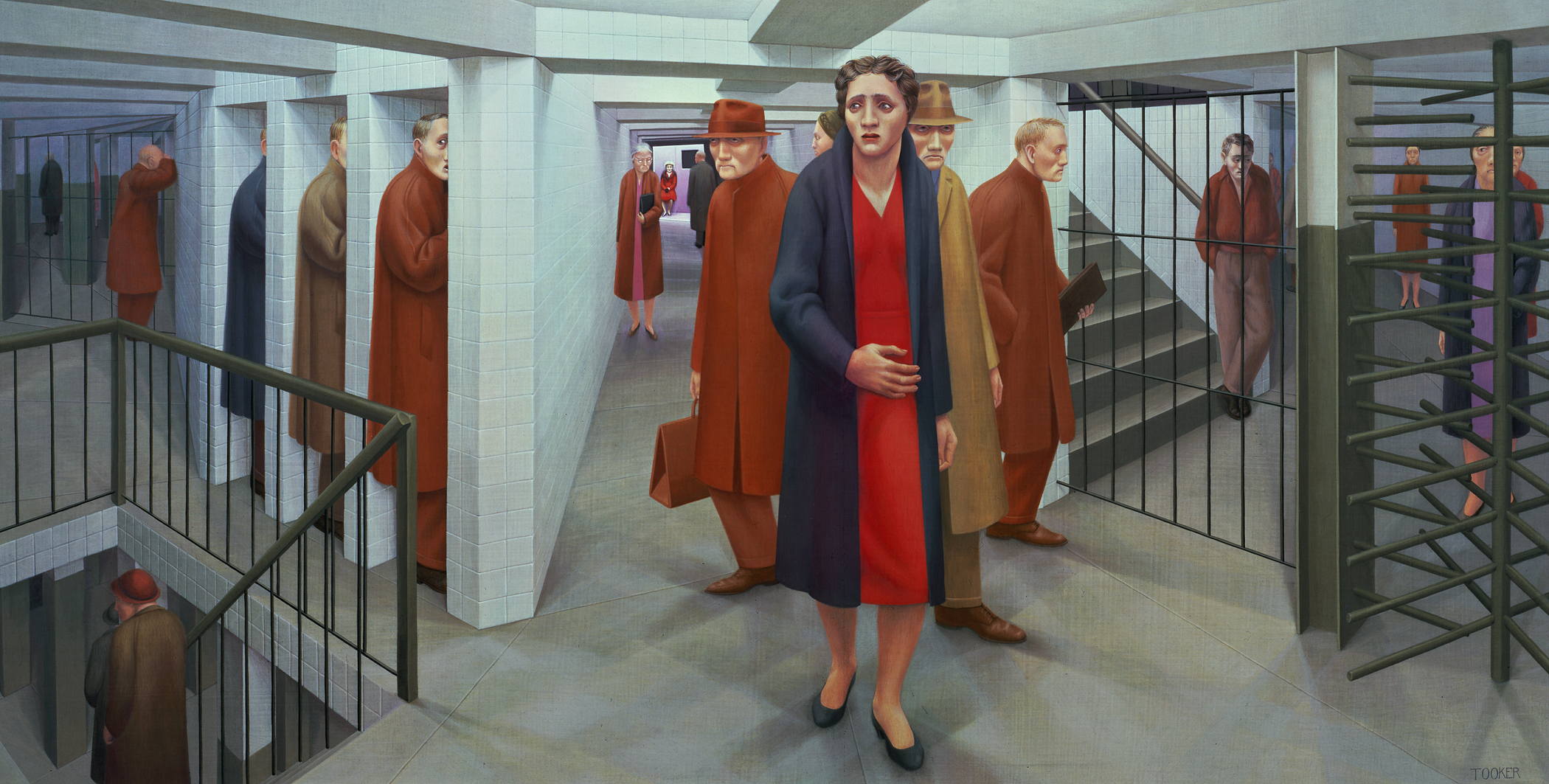 Among the most ambitious and thought-provoking works is Henry Koerner’s 1946 “Mirror of Life,” which reflects a post-war scrutiny of reality and its troubled underpinnings. In the foreground, a man peers out of a hotel window revealing his mistress lying nude on a bed, along with a card game beside the bed. Yet he’s compelled to look out over an extraordinary panorama of life that reaches back into time to the Biblical scene of betrayal in the background. Cain kills Abel, both as naked as the philandering observer — wearing only his watch — and his mistress. Koerner’s virtuosic and ambiguous handling of a sprawling scenario defies accusations of heavy-handed moralism, and befits the surrealist tradition of bringing disturbing dreams to life on canvas. 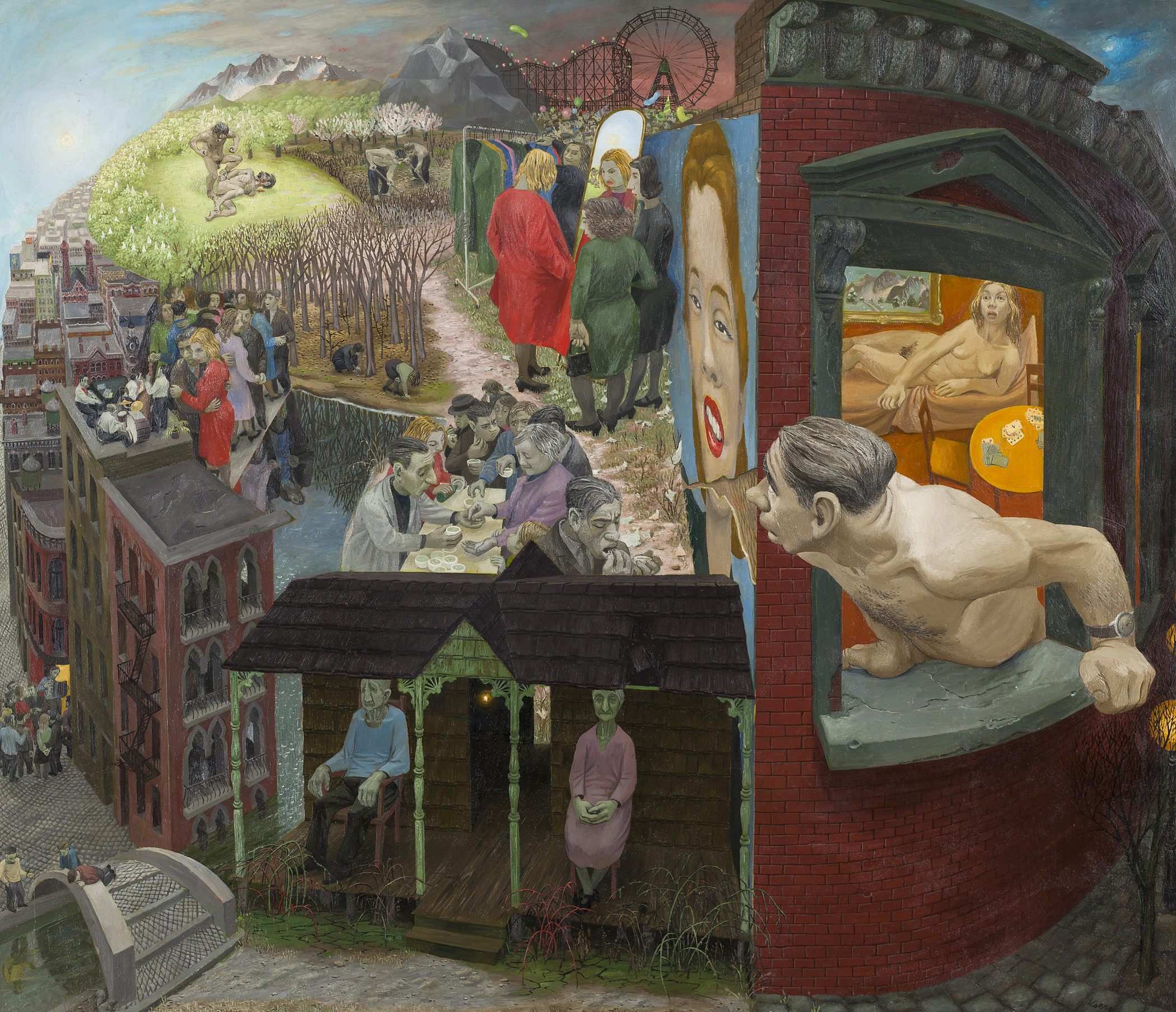 I left the exhibit with the feeling that this intersection of realist and surrealist insight suggests that we Americans don’t spend enough time in reflective self-examination.

Remember, film noir — deeply laced with mind-twisting psychological scenarios – also took off in the 1950s. You begin to see how attuned to the times American surrealism was, and may remain. 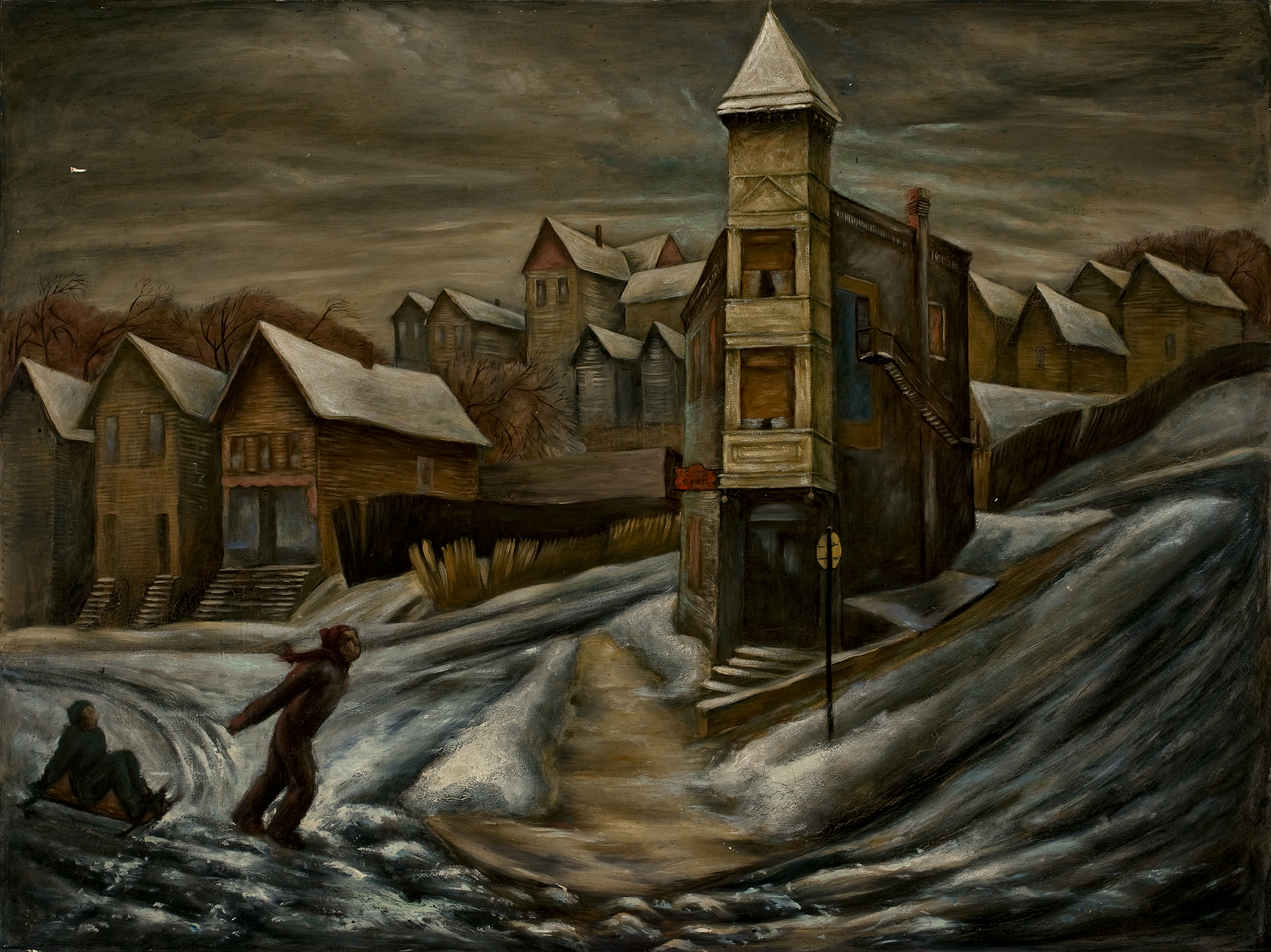