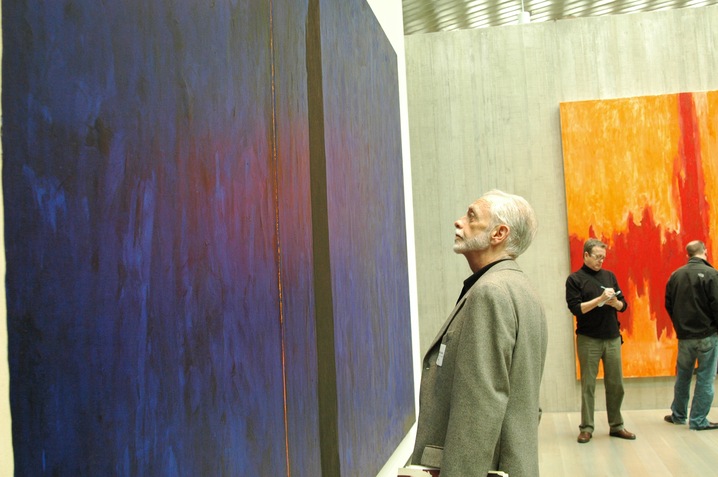 A visitor contemplates a painting in the Clyfford Still Museum. Photo by Rebecca Jacobson/PBS newshour

Boulder, CO — Any art lover visiting the Denver-Boulder area should not do what I did circumstantially — miss the Clyfford Still Museum in Denver.  So I offer brief but ardent encouragement to visit rather than an exhibition review.

There’s something symbolical in the name Clyfford Still, because he still holds up today well where many of his contemporary abstract expressionists seem dated. It helps that he’s among a small handful American artists who have a museum dedicated to their work.

His mysteriously original art — spacious, meditative, yet severely incisive — has found a home within that institutional reality. You must give cultural credit to Colorado.

As for me, I was hoping see, in the oil, a sort of secret inlet into truth or possibility or beauty, which his work has always promised, a painterly utterance always delivered in a comparative whisper, or insinuations, unlike the loud, splashy proclamations of many of his Ab-Ex contemporaries.

Still’s canvases are typically vertical rectangles and at least the size of a door so the notion of a hidden truth doesn’t feel outre.

Though Abstract  Expressionism is identified as a New York movement a Western locale for this museum is fitting in that Still, a North Dakota native, spent much of his formative years and teaching years in various West Coast locations. And his paintings’ vast scale and craggy majesty can also evoke the Rocky Mountains.

Irving Sandler once wrote that Still’s images drew from a “wide-open prairie landscape, reminiscent of the environment of his youth.”

But the color-field aspect — combined with his utterly personal and almost unsettling way of handling the jagged edges and interior fragmentations of paint — mark his style. 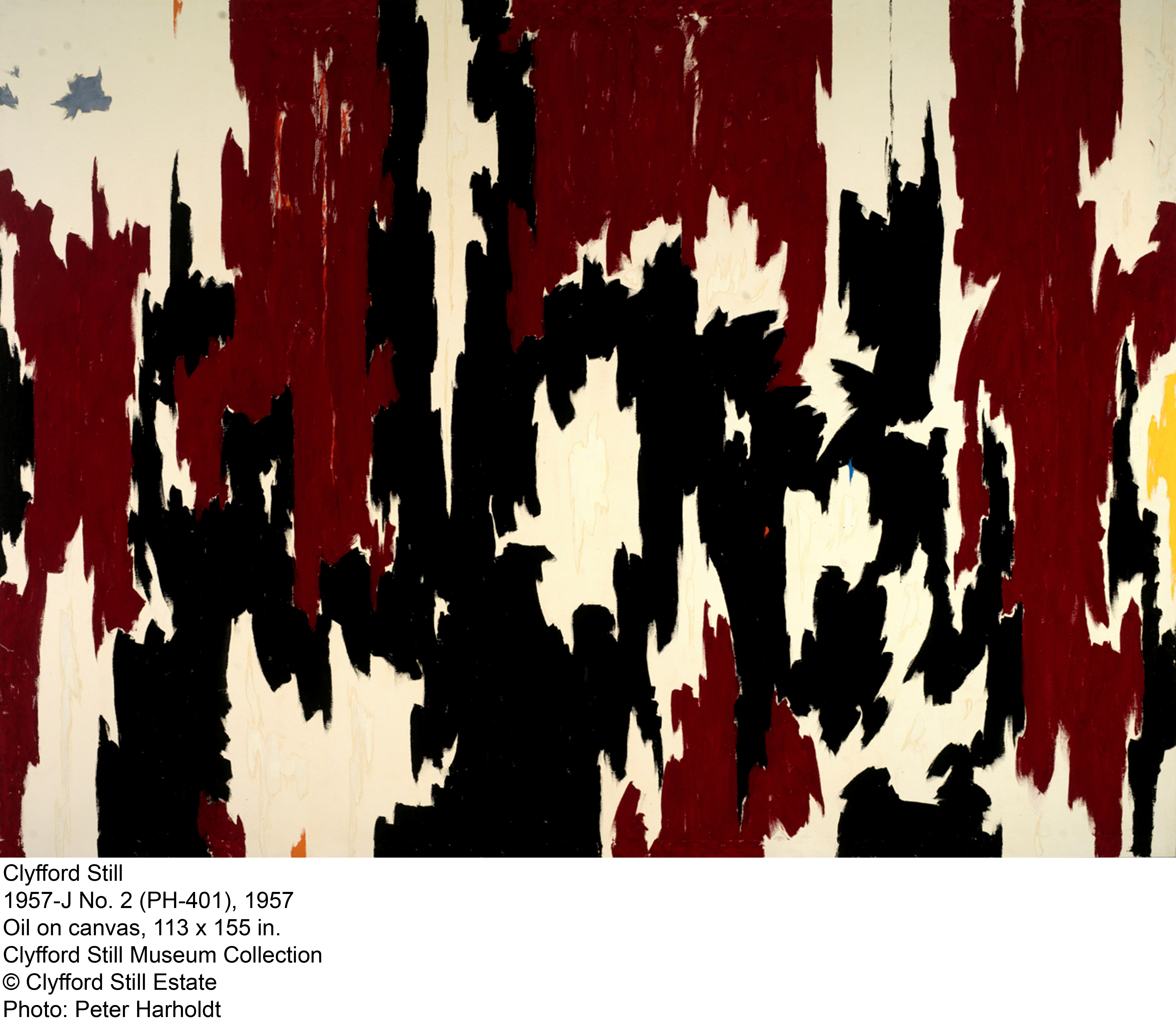 One also will find a tersely zig-zag vertical gash down much of the length of a number of significant canvases, as in the one he posed with for renowned Ab-Ex photographer Hans Namuth in 1951. That slash recalls for me the long white scar that ran vertically the full length of Captain Ahab’s body, supposedly the work of a lightning bolt. 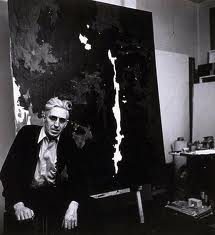 In fact, fellow painter Robert Motherwell’s reaction to first seeing Still’s work was to call it, “A bolt out of the blue.” 1

There was a kind of imperious solitude to Still’s career not that removed from Ahab who, despite his vengeful monomania, famously had “his humanities.” In the decade of the 1950s that he spent in New York, Still grew to despise and disdain the art world. He moved to Maryland and rarely returned to New York. His reclusiveness in later life and the unyielding stringency of his will have not served him well in posterity, despite his importance. Only three big exhibitions surveying his work were mounted in the last 30 years.

But his will stipulated that his massive estate of art – more than 2,300 works, comparably only to Picasso’s estate in sheer size — be released only if a museum were built exclusively for his work. In 2007, Denver and its mayor John Hickenlooper took up the cue.

The museum’s web statement on the show explains:

“Clyfford Still’s art and thought are pervaded with powerful, albeit subtle, allusions to memory (both cultural and personal), the ancient past and to long-established aesthetic traditions that are sometimes summoned only to be shattered afresh in his hands. This exhibition—covering a span of approximately forty years (c.1929-70) and including over fifty paintings, photographs by the artist himself, works on paper and sculptures—explores these currents of imagery and ideas that surge through Still’s figurative and abstract compositions.” 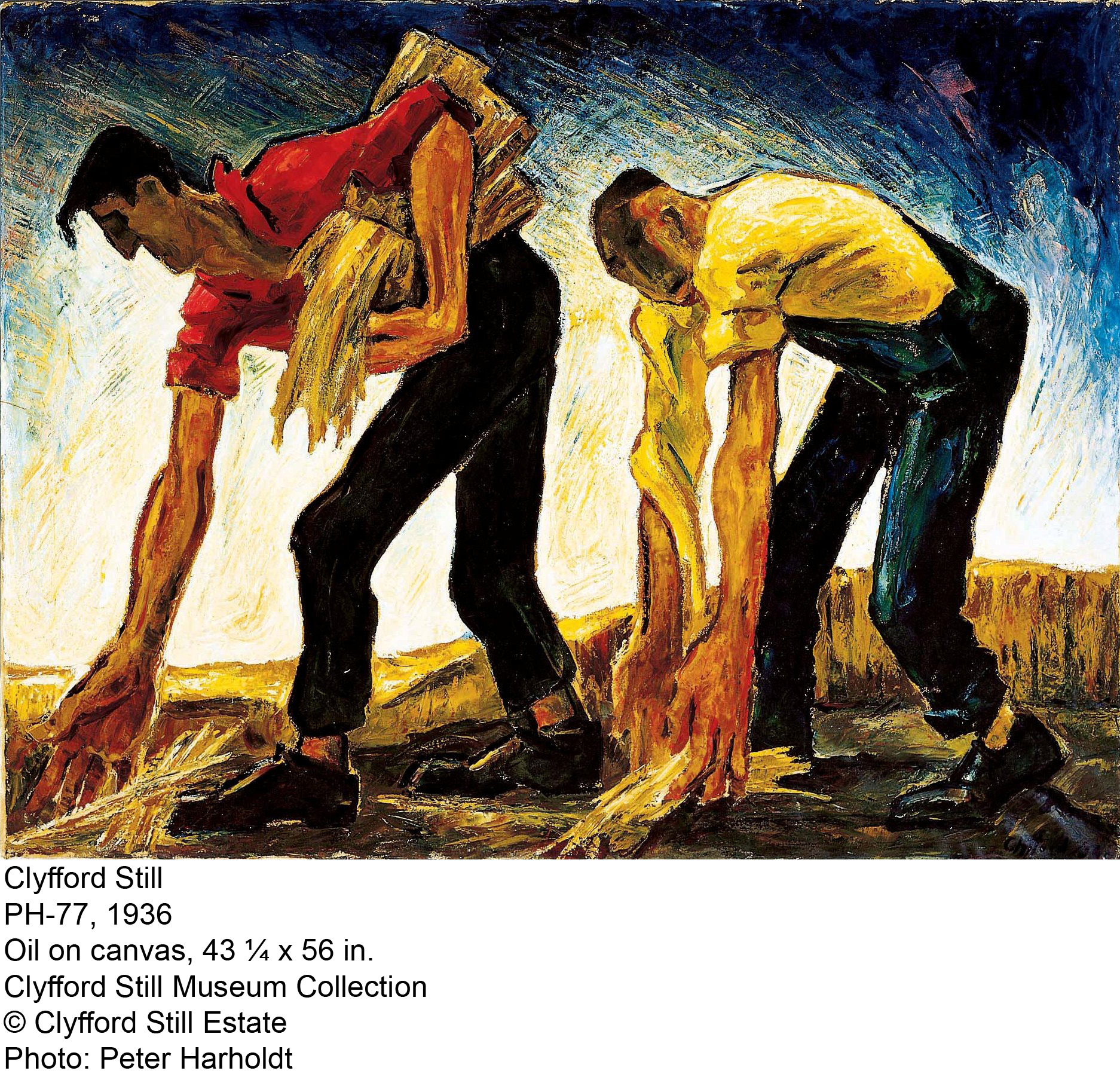 There’s plenty to explore is such a metaphoric duality, and this show should provide that opportunity. But I leave that for you to discover, and much more.

The museum website statement adds this comment from Clay Spohn, an artist and colleague of Still’s: “After seeing many of Clyfford Still’s works I have come to the conclusion that he is a sorcerer with powerful magic…Nay! An Earth Shaker.”

2 Irving Sandler. The Triumph of American Painting: A History of Abstract Expressionism, Praeger, 1970, 162

2 thoughts on “Clyfford Still? Yes, the great American painter still holds up, in a whole museum”