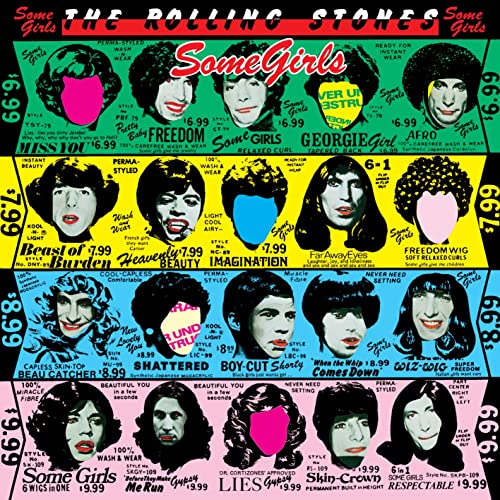 Album cover for “Some Girls.” Amazon.com

The Rolling Stones song “Far Away Eyes,” has been described as a country satire, which it certainly seems like, given the comic exaggeration in the lyrics and Mick Jagger’s swaggering delivery. But I think it also reflects the Stones longtime love of the country music vernacular.

So, if a satire, it’s a deeply affectionate one, as I hear it. Watching them, you can see they’re having a good old time. And listening to the band, it sounds as authentic traditional country (Bakersfield style) as many of the acts you might see these days at the Grand Ol’ Opry. The gently sashaying tempo embraces the song like a romancer sweeping a girl (with faraway eyes) off her feet in semi-slow motion.

And here. the Stones nailed the country style to the wall, in 1978 — with a song they wrote — though you might guess they were covering country songwriting legend Harlan Howard. For a bunch of Brits, you gotta hand it to them — oh, maybe a ten-gallon hat and a bolo tie. The song helps underscore their long-professed love of country music.

I did get some appreciative comments and responses from some of my rock ‘n’ roll friends, with whom I directly shared the post.

The lack of response otherwise might suggest I don’t have many country music friends, which is probably true. When I got deeply into American vernacular roots music somewhat belatedly in the late 2000’s, I did not really cultivate many friends who were into these American genres. I always had an appreciation for roots music styles, but after my divorce I almost involuntarily made an emotional investment in Texas outlaw style country, primarily courtesy of Townes Van Zandt.

I started writing for nodepression.com, and was even putting together material for a prospective dissertation on American roots music as a literary form, while I was pursuing a doctorate degree in English at Marquette University. However, I only got halfway through the course work, so my roots music material has either languished or been cherry-picked for publication in some form.

But I enjoyed this video so much I wanted to share it more. So I’m giving it another shot as a blog post.

This shore is tasty, showin’ how well The Stones handle full-blown country in 1978, from the “Some Girls” album. I admit I never knew Mick could handle the piano like a honky-tonker, while delivering a typically stylish vernacular vocal. And Ron Wood plays a mournfully bittersweet pedal steel solo. The harmony refrain goes down like a shot of 90-proof Jim Beam.

The relative indifference to the posting may have to do with the song’s relative obscurity, despite its quality. It did make it onto a single but only as the B Side to “Some Girls.” It’s also on the 1978 album titled Some Girls. Finally here’s a Facebook exchange about “Far Away Eyes” between myself and Cal Roach, my next door neighbor, who also happens to be a music critic (no kidding).