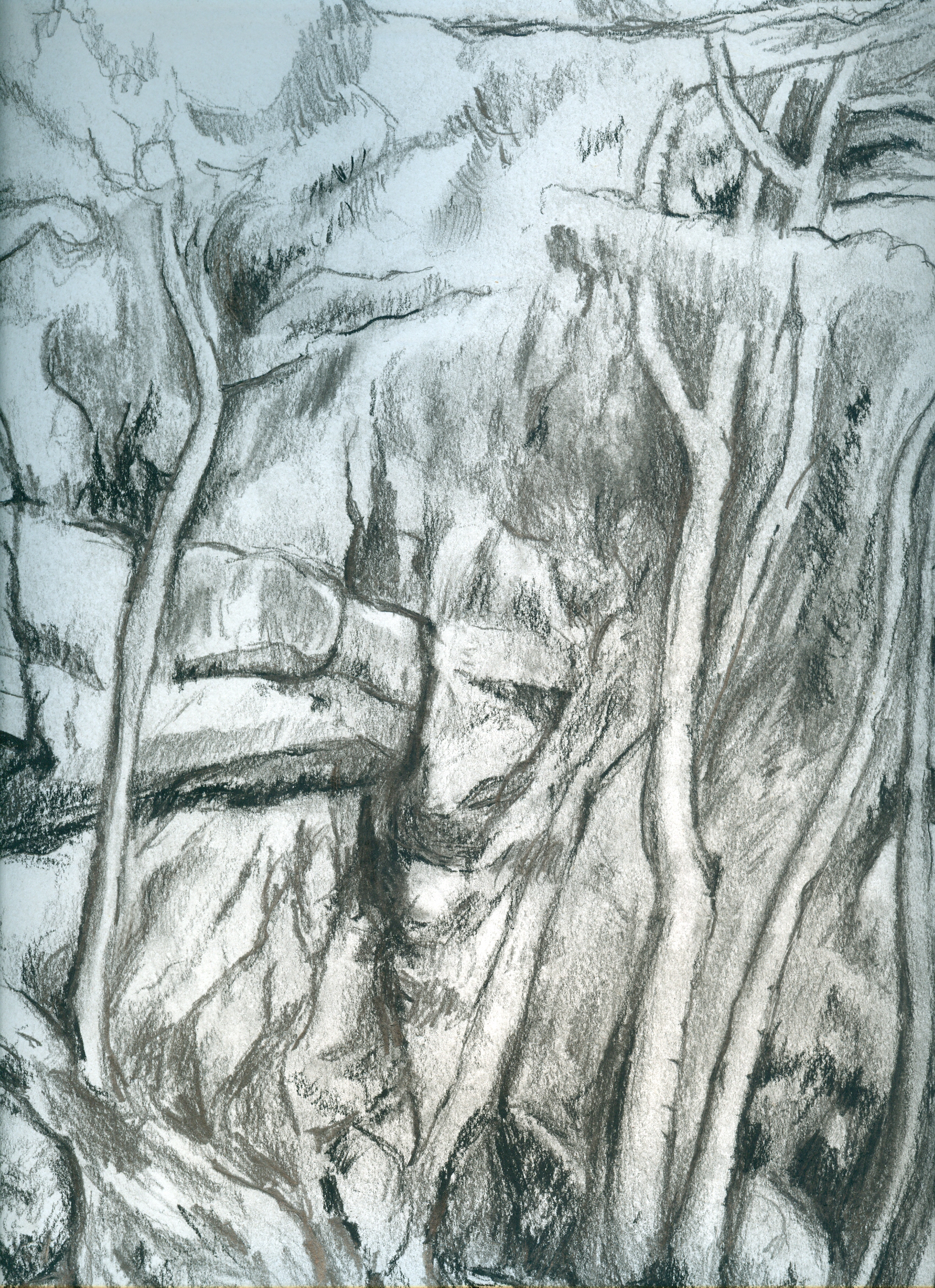 In celebration of the new home and PBS documentary of the extraordinary Barnes art collection (see below) I offer my humble rendering of a Cézanne painting, which he did in oil on canvas c. 1898, and I drew in pencil (and charcoal) originally in 2003. This is actually a detail — the actual drawing is several inches taller and wider than my scanner screen.

I rediscovered this drawing a few days ago, tucked away in an old sketchbook in my basement and dragged it upstairs. After enduring several of my residence moves and incalculable jostlings of the sketchbook (which spent quite a while in the trunk of my car), the drawing had become somewhat smudged, and I realized it needed stronger dynamic contrasts. I had originally done the whole thing in pencil. So now I pulled out and sharpened a charcoal pencil and began to dig into the drawing with it. I also added significant pencil detail to what I had done in 2003 and provided contrast highlights through erasures.

The original painting is titled In the Park at Château Noir and it is in the Louvre in Paris. You can see a reproduction of it on page 253, plate 49 in the catalog Cézanne: The Late Work published by the Museum of Modern Art.

So I had suddenly rekindled my interest and passion for Cézanne. I had gone to New York to see the exhibit Cézanne: The Late Work in 1977. There I also saw the jazz guitarist John Abercrombie wandering wide-eyed through the crowd with a female companion, which seemed entirely apropos, given his highly textural and oddly lyrical impressionist playing style, extensively documented on ECM Records.

I began reworking my drawing ”after Cezanne,” one day before discovering the news about the Barnes collection, which is to be housed in a brand-new museum in Philadelphia and will be subject of a PBS documentary telecast for the first time tonight August 3, 2012.

Among its other distinctions, the Barnes collection claims to have more works by Cézanne than does the Louvre. But it’s a wide ranging collection of both impressionist and post-impressionist painters and artists.

Like many others, I consider Cézanne the father of modern art in that he opened the door to abstraction while delving as deeply into physical reality in a “deconstructive” mode as one could possibly imagine. One can easily see how this work led to Cubism but what truly impressed and moved me was the struggle contained within his art, which many people have commented on. It was an internal dialectic of visual tension what Hans Hoffman called the “push pull.” It was like Cézanne was trying to break the physical world down into its atomic parts and reassemble it again.

But his technology was merely the timeless oils and canvas done en plein air in the rough-hewn hills and valleys and peaks of France, especially his obsession, Mount St. Victoire.

His work always captured that rough-and-tumble quality of the rural French landscape; and because of that some people questioned his technical abilities, as they often did another modern art genius, jazzman Thelonious Monk. Actually a Cézanne painting would fit perfectly as the cover art for a Monk album, with the painter’s highly charged, asymmetric brushstrokes, echoing Monk’s inimitable attack of the keyboard and wonderfully woozy and ragged-jagged melodies. Both Cézanne and Monk were absolute originals and visionaries who transformed their art forms and thus will be remembered long after countless artistic and musical technicians are forgotten.