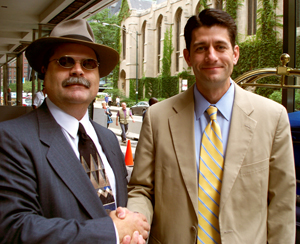 Below is a little exchange for those who think my first post about Paul Ryan was simplistically reductive by characterizing him as a right-wing ideologue budget geek who sees humanity in terms of mathematical digits https://kevernacular.com/?p=676

Take a look at this You tube chat with Bill Clinton. The ex-president somewhat disingenuously says he hopes the Democratic win in New York won’t be “an excuse to do nothing ” about Medicare. He’s surely well aware of the The Simpson-Bowles deficit reduction plan.

Ryan paints himself as the hero rising to save America from the morass of political paralysis, then adds: “We know the math, but we had to put ourselves out there,” pumping Clinton’s hand. “It’s all about the math. The ex-prez may have met his match as a political schmoozer, with this blue-eyed, iron-pumping bizarrely friendly, Ayn Rand-reading Catholic family man.

The Simpson-Bowles plan has as accurate and effective mathematics as anything proposed, but it doesn’t drain the blood of the middle and lower class and the sick and disabled, so that the superrich 1% can gorge themselves into utter grotesqueness. The Ryan Republicans have cravenly fought the proposal into paralysis, at every turn. Even reflexively moderate met Mitt Romney told Sean Hannity recently “My plan is very similar to the Simpson-Bowles plan.” It won’t be when his VP-candidate gets his mitts on it.

As Joe Klein of Time rhetorically asks, should Pres. Obama make a make a strong case for the Simpson-Bowles plan, perhaps in his convention speech?

Otherwise we may be doomed to the horrors of “Mittamorphosis” (see previous posting), a president transformed into right-wing, bloodsucking creepy crawly that Kafka never quite dreamed of.