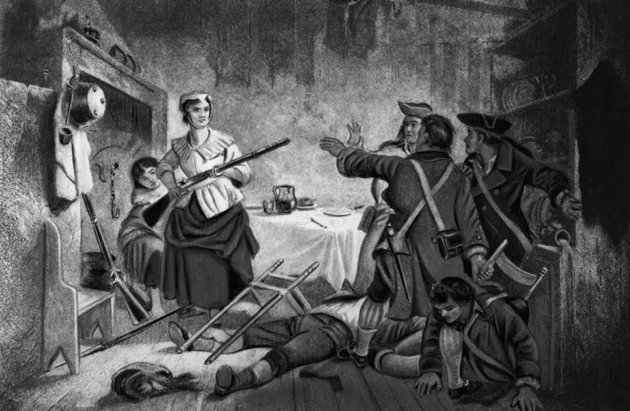 Some paranoid Republicans imagine housewives protecting themselves against “jack-booted government thugs” as the NRA’s Wayne LaPierre said, but all they had were muskets back in the day the Second Amendment was written. Courtesy yahoo.com

While Senate majority leader Harry Reid is beginning to exhibit a sliver of backbone on the issue of legislation to control gun violence, the gang of opponents to any organized safety against further tragedy is bending over backwards with agonizingly contorted rhetorical arguments.

“We have a responsibility to safeguard these little kids,” said Reid, D-Nev. “And unless we do something more than what’s the law today, we have failed.”

Reid hardly matches President Obama’s leadership and eloquence on the subject. But he gets to the procedural crux.

In response, one of the conservatives threatening to block even debate on the issue, Sen. Mike Lee, R-Utah, said the Democratic effort would violate the Second Amendment right to bear arms, citing “history’s lesson that “government cannot be in all places at all times, and history’s warning about the oppression of a government that tries.”

Does Lee realize that he contradicts himself and his position with this broad, abstract fantasy argument, which completely ignores the cruel, heart-breaking reality of little kids getting massacred with military-style assault weapons that have no use in society except to kill people? Plus the Democrats have given up on banning such weapons already, and are only going for a universal background check on gun purchases.

But to Lee’s tautological argument: if a government cannot be “in all places at all times,” how could it physically oppress its citizenry throughout 50 states, to where the people need to take up arms to fight for their freedom?

And how likely is it that legislators elected by the people would ever condone a dictatorial, genocide-threatening oppression of their constituents? I suppose the paranoia fantasy would imagine a government coup of itself, but such anti-democratic contortions are unimaginable in any Democratic, or even Republican, administration. Both parties are just too bound by cozily self-serving convention and the status quo to do anything so radical.

Even if we humor Lee’s improbable horror scenario, how long would it take before a group of miscellaneously armed homeowners are subdued by a battalion of highly trained Marines?

Back in the real world, how many deadly rapid-fire killing guns does Lee want in the hands of criminals and mentally unstable people, which background checks would safeguard us against, and which virtually all law enforcement officials support?

Rarely have elected officials, such as the filibuster-threatening senators, ever exhibited more pathetic and cowardly antidemocratic behavior. They’re afraid of even a debate on this urgent issue, perhaps because they know they will lose it. Because it is what the people (or 91% at last count) want, the same people he pretends to protect with the Second Amendment, which seems increasingly as antiquated as the muskets used by the colonists who wrote it. 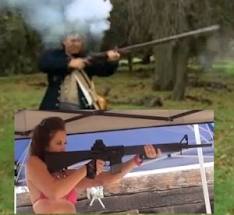 The single fire-and-reload musket (above) is all that colonists had when the “right to bear arms” amendment against theoretical government oppression and genocide was written. The insert photo shows a modern assault weapon today used in mass murders like Newtown. Courtesy ensuremekevin.com

As my friend Anna Hahm recently commented, if we restricted ourselves to ancient, rusty muskets, allowing the NRA its slobbering gun-lust might not be too scary.

2 thoughts on “How can the government be everywhere stealing our guns, Senator Lee?”