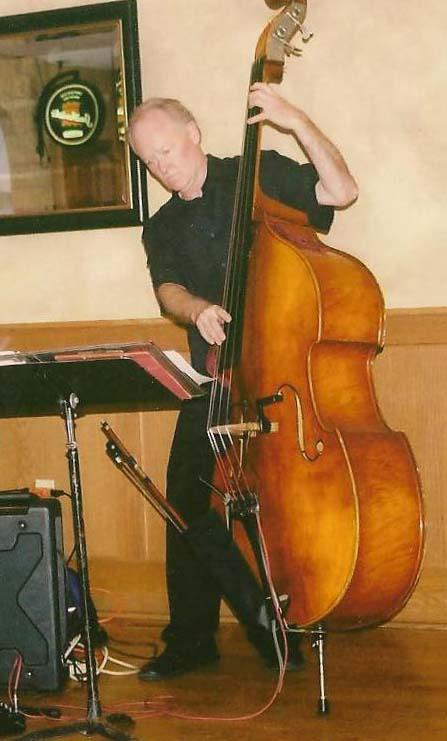 The pain arose like an assassin at 2 a.m. December 14, slashing into Gary Christensen’s gut. Worse, he felt desperately alone — in a friend’s cottage in a dark, desolate area outside of tiny Hillsboro, nearly a whole state away from home.

He called Susan Pack, a close friend in Milwaukee. She left at 8 a.m., driving across the state. Pack met Christensen at Hillsboro Hospital where doctors performed emergency surgery, for a “bowel perforated in a terrible location that caused complications,” he says.  Pack persuaded the doctors to relocate him closer to home, University Hospital in Madison. Two weeks in ICU and a 27-day hospital stay ensued. Then Pack nursed and fed him healthy food at her home for three weeks.

A $250,000 hospital bill now threatens the dedicated jazz bassist-orchestra leader. Like many musicians, he carried insurance until it became prohibitively expensive. The affliction’s cause remains a medical mystery.

Except for financially, he’s out of the woods and back leading the orchestra Thursday’s at O’Donoghue’s in Oak Creek. He’s still frail and sits, plunking electric bass rather than his usual bass fiddle.

The 16 musicians play as powerfully and precisely as ever, a testament to their talent and classically trained Christensen’s scholarly leadership. The Superband has played virtually every Thursday of the 21st century, and it shows. Arguably Wisconsin’s finest big band (Lawrence University’s Jazz Ensemble has claims); this pro-level repertory rehearsal band handles devilishly difficult arranger confabulations with aplomb and sure-footed swing. We’re talking one brilliant composer-arranger each a week: Ellington or Toshiko Akiyoshi, Thad Jones, Oliver Nelson, Bill Holman or Don Ellis…

It helps to have many of the area’s finest players and soloists, including saxophonists Wiegratz and Tim Bell, trombonist Mike Franceschi, pianist Ken Kosut and the trumpeters Kammerer and Kaye Berigan, who fully modernizes his legendary uncle Bunny Berigan’s legacy. Though they also play rock, this is a kind of musical purism and altruism. The weekly $5 cover charge goes to local charities, donations that yearly amount to thousands of dollars.

This is an unpaid musician’s “kicks gig,” Christensen explained between sets. As a parlor pianist, I merely imagine a musician’s kick in partaking of an acoustic jazz orchestra’s organic muscularity and coordinated beauty, at this stratospheric level. Playing one of the WAMI award-winning band’s signature tunes — the transporting “Brazil” (familiar as the recurring theme of the movie Brazil) — might feel like soaring amid a flock of great birds migrating joyously south. Similarly, toward the end of “Knee Deep in Rio,” each of the saxes, trumpets and trombones break formation as distinct creatures in a descending passage of textured filigrees and luminous grace notes, like dropping in on Rio’s mountains, sunlight and surf.

Christensen owns a treasure trove of brilliant big-band arrangements, a costly collection bolstered by fans, who often pay for new charts for each player. Band manager Barbara Wagner says, now’s the time for the community to step up for the man himself, who’s given so much to the community.

Nothing but death — or maybe hospital collectors — will stop Christensen. Clearly our health care system is very sick, but America’s indigenous art form needn’t also suffer, or die off.  Unless it does.

This was originally published as an article in The Shepherd Express.