I couldn’t get enough of the 2010 film The Trip, primarily because of the almost compulsive profusion of comic impressions by the two central characters, British actors Steve Coogan and Rob Brydon, who play versions of themselves in the lovably eccentric (and often lovely) film by Michael Winterbottom. I’m delighted to learn that it’s a distillation of a six-part British TV series and Winterbottom fans will remember these two performers from that director’s Tristam Shandy.

I’ll admit to a somewhat sophomoric glee in watching these two accomplished, mid-40s men competing with each other as if nothing had changed since junior year at the old academy. Those who have long suffered the foolishness of would-be impressionists bear with me; there is much more to the film than mimicking.

Nevertheless, the most overt and constant pleasure is these skilled and bickering hams going at it with repertoires you sense they have been building and honing since they first discovered their common interest and talent decades ago — to the delight, befuddlement and occasional irritation of anyone within earshot.

Brydon — here the unflappable tag-along buddy of Coogan, as a food critic on assignment — appears to be the more versatile impressionist of the two, and utterly compulsive. Between the two of them, they spend probably 70 per cent of the film’s dialogue in impressionist mode, and I’m not talking about Monet (but I will shortly!). For Brydon that probably rises to 85 per cent. I wonder if these percentages are not all-time highs for a feature film that is not simply a concert document of a comic impressionist. 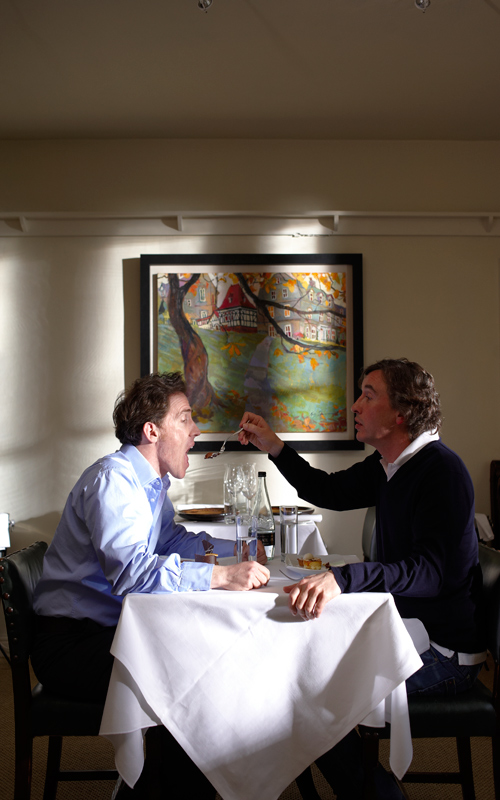 Here’s a partial list of the notables these two cut-ups mimic: Michael Caine, Hugh Grant, Woody Allen, Sean Connery, Anthony Hopkins, Liam Neeson, and Robert De Niro and Al Pacino in their similar star-turn-in-a-restaurant in Michael Mann’s Heat, one of my favorite films. Then there’s Coogan’s minimalist mastery of the sound of a  submarine sonor.

Among all these, the supreme impression for both comics is Michael Caine. Their first scene of fencing Caines is just the two of them at a restaurant, and funny enough.

But they reprise their Caine impressions with a vengeance to impress two women. The women of course don’t have a clue whom they are doing, even though both impersonations are brilliantly spot-on, in their own ways. Brydon’s Caine is more manic, and bursting with choice and evocative lines from the impersonated actor’s films. But Coogan’s version, as he asserts, is more accurate and nuanced, especially as he ventures into Caine’s aging persona and the deeper realms of the actor’s emotional recesses (“She was only sixteen years old. She was awn-lee sixteen years old…”). This Caine can sometimes feel like the only volcano in the British Isles, long dormant and forgotten. Now his large, bleary eyes glimmer and shine, his ruddy face blushes deeper, and the voice sounds like both ancient, cracking rock and lava, rising from a subterranean anguish. I almost hurt myself watching this scene.

Brydon’s Hugh Grant is also devastating, and rises uncontrollably every time he talks to his wife back home, requesting a bit of phone sex, with Grant’s mushy blend of  aristocratic charm and abject awkwardness. It gets Brydon into moderate trouble with his loving but erotically temperate spouse. One begins to sense why he also carries a Woody Allen barb close to the surface: “A man was recently charged with sexually molesting my wife. Knowing her, I’m sure it wasn’t a moving violation.”

Now all this somewhat adolescent indulging in what Coogan calls “silly voices” clearly won’t be some viewers’ cup of tea. But much of the rest of the film’s appeal is actually rather highbrow and aesthetic. In this sense, the combination of broad humor and discerning cultural acumen recalls Alexander Payne’s Sideways. However, that film’s comedy was mainly situational, where here it seems to center on what appears to be largely improvised character muggings by the two main actors. In this sense,  The Trip feels like a somewhat restrained Robert Altman film.

Yet Winterbottom is much more of a traditional aesthete than Altman. And here is where the film slides surprisingly into the art-house category. Coogan carries the more sophisticated sensibility. He’s been hired by the Observer to review six upscale restaurants throughout England. His girlfriend is on the verge of dumping him, so he asks his old chum to accompany him.

The emotional and psychological weight of the film channels mainly through Coogan’s character, and perhaps reflects much of the actor’s own professional longings and frustrations —  still striving for major leading man roles, and striking out romantically as a seemingly compulsive Don Juan, or what he’d prefer to think of as a British Don Quixote.

So Brydon is clearly his Sancho Panza in this slyly literary film. They also recite British poets and the otherwise cynical Coogan falls into a near-religious spell when the pair visits an old inn where Samuel Taylor Coleridge and his brilliant contemporaries spent exalted time together.

And then there’s the English countryside, filmed with Kubrickian care by Winterbottom, and yet this director’s attunement to British mists and moors also suggests an appreciation of Monet, and JMW Turner, as Coogan notes.

And oh, the food!  The two men are indulged at every table by the most exquisite concoctions and presentations that perspiring master chefs can muster.

So the film has an undercurrent of deep sadness, again akin to Sideways, which resonates as a brooding backdrop to all the famous characters who rise like uncredited ghosts, with a psychic power and persistence that almost feels Shakespearean.

That makes this also one of my all-time favorite haunted-house stories, and surely the most improbable. Because the house is in the mind of Coogan — the suffering, sensitive narcissist, whom you feel for somewhat, as you acknowledge the justice of his frequent comeuppances.

4 thoughts on “Another trip, with abundant comic relief from politics and other ugly human doings”