I had fully planned to spare Culture Currents and you any references to Melville in my latest posting but the social network match.com forced my hand. That author aside, anyone interested in censorship in the context of the First Amendment may find this posting of interest. The following is a letter I wrote — KL

A breathtaking degree of intellectual and spiritual pettiness, small-mindedness and hypocritically obsessive prudery has been exposed in the popular online social media site Match.com. I will go to great lengths as a professional journalist, author and blogger to expose this fault if the offense is not corrected ASAP.

My profile has been rejected because Moby-Dick is listed among books recently read. This is the case regardless of the fact that the match.com person I spoke with on the phone is aware that Moby-Dick is one of the great works of world literature. It is also probably the most written about and studied work of fiction in the 20th century, from high school to college to full scholarly careers.

But don’t take my word for it. Please note the quote from Wikipedia below as the beginning of your education and growth out of adolescence.* (The relevant chapters on Moby Dick in F. O. Matthiessen critical masterwork American Renaissance are highly recommended).

The supposedly “obscene” title you object to has been published in 200 editions, in many languages, including abridged, illustrated versions for children and adolescents (e.g. The superb Candlewick Press Edition adapted by Carnegie Medal winner Jan Needle and illustrated by Patrick Benson, who won a Mother Goose Award winner for best book in British children’s lit. 1 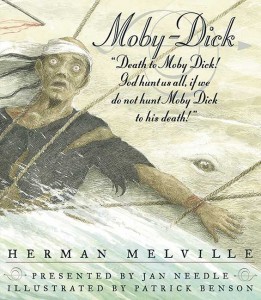 None of these editions has ever changed the title. (Evidently “Mother Goose” is a true subversive of youthful morals. Isn’t there also something obscene about the words “mother” and “goose”? And “apple pie” and “America”? Time to expand your censoring mechanism.)2

Moby-Dick has also been made into at least six different film versions and a major opera in 2010 by celebrated composer Jake Heggie (“Dead Man Walking”). If you are so concerned about such a proliferation of “obscenity” perhaps you should do something other than to censor your list of literate customers.

The reason for my rejection is that the word “-Dick” is used in my profile. This says far more about the mentality of match.com than any of the people who might incidentally use that word, in total innocence. First, the word is taken out of context – being the partial name of a whale, based on a real-life whale, Mocha-Dick, which sank a number of whaling ships in the early 1800s. The full title Moby-Dick or, The Whale makes clear what the name refers to before one even opens the book.

We are adults, not snickering adolescents. At least I am, as are the women I communicate with on the site. I now wonder about the people running your site. Would you also reject any Richard who uses his life-long nickname of Dick in his profile name or anywhere in his profile text?

That would be only a personal affront, bad as it is. But this rejection is far worse, an insult to every literate person on your website and, by extension, worldwide.

Besides writing the book commonly considered the Great American Novel, Melville wrote an important book of poetry about the Civil War, Battle Pieces and Aspects Of The War, other masterpieces including Bartleby the Scrivener and Billy Budd, pioneering short stories of feminist viewpoint: The Chola Widow and The Bachelors Of Paradise And The Maids Of Tartarus, and the epic poem Clarel, A Poem and Pilgrimage in the Holy Land. His novel White-Jacket is often credited for helping to outlaw torture in the U.S. Military. Moby-Dick itself is often understood as a meditation on the nature of good and evil, man versus man,  man in relation to nature, Man in relation to God, the pitfalls of America’s emerging empire politics, a celebration of democracy and an unprecedented appreciation of cultural diversity and human brotherhood, and a critique of the evils of demagoguery, among other things.

I will begin exposing your injustice with the column in my culture blog, which I envision with the working title The Perpetual Adolescence of Match.com.

The inevitable adolescence of the date site match.com was apparently born long before its actual birth, in 1851 when Herman Melville’s great novel was published. In 2012 the website remains in its sniggering whispering, judgmental adolescence. That makes match.com, in a sense, a 160-year old adolescent. Yet I do not criticize adolescence, which you give a bad name. Do you remember the joys, perplexities and wonders of puberty and early, oft-unrequited romance, or do you just presume its irredeemable evils?

Because a novel I am writing about Melville is speculative and set in the present, it will allow a reincarnated Melville to observe his legacy as well as the insults to it. I have now discovered the most egregious insult I know of and match.com will find a dubious place in the novel, unless this is corrected.

It is high time for your web site to drag its brain out of the gutter and join the rest of the civilized world.

As for civilization, I leave the penultimate word to Melville, on the moral hypocrisy of those who suppose to “civilized bodies,” as if civilization resides in some miniature notion of a purified body that recoils at any indirect allusion to the parts of itself that generate its existence (i.e. a self-hating Puritan prudery).

“We may have civilized bodies and yet barbarous souls. We are blind to the real sights of this world; deaf to its voice; and dead to its death. And not till we know, that one grief outweighs ten thousand joys will we become what Christianity is striving to make us.” – Melville

I know what I grieve today, a death blow to freedom of thought, expression and education. 3

2. This isn’t the first time Moby-Dick has been censored. But the Longman Critical Edition of MD restores and delineates the full range of vast and picayune cuts made to the first British edition of the novel. Those sage British editors even omitted Ishmael’s Epilogue, which makes the story inconceivable, with no survivor to tell it. It’s an historic measure of the waterlogged censoring intellect.

3. However anyone who thinks Melville has been consigned to the dustbins of censorship or academic relevance should look into the summer-long 2012 Melville festival in the Berkshires, home of Melville’s farm Arrowhead, where he wrote Moby-Dick See: http://berkshirehistory.org/news-events/news/

With the burgeoning of Modernist aesthetics (see Modernism and American modernism) and the war that tore everything apart still so fresh in memory, Moby-Dick began to seem increasingly relevant. Many of Melville’s techniques echo those of Modernism: kaleidoscopic, hybrid in genre and tone, monumentally ambitious in trying to unite so many disparate elements and loose ends. His new readers also found in him an almost too-profound exploration of violence, hunger for power, and quixotic goals. Although many critics of this time still considered Moby-Dick extremely difficult to come to grips with, they largely saw this lack of easy understanding as an asset rather than a liability.[citation needed]

In 1917, American author Carl Van Doren became the first of this period to proselytize about Melville’s value.[39]

In the 1920s, British literary critics began to take notice. In his idiosyncratic but landmark Studies in Classic American Literature, novelist, poet, and short story writer D. H. Lawrence directed Americans’ attention to the great originality and value of many American authors, among them Melville. Perhaps most surprising is that Lawrence saw Moby-Dick as a work of the first order despite his using the original English edition.[39]

In his 1921 study, The American Novel, Carl Van Doren returned to Melville with much more depth. He called Moby-Dick a pinnacle of American Romanticism.[39]

The next great wave of Moby-Dick appraisal came with the publication of F. O. Matthiessen‘s American Renaissance: Art and Expression in the Age of Emerson and Whitman.[40] Published in 1941, the book proposed that Emerson, Whitman, Thoreau, Hawthorne, and Melville were the most prominent figures of a flowering of conflicted (and mostly pre-Civil War) literature important for its promulgation of democracy and the exploration of its possibilities, successes, and failures. Since Matthiessen’s book came out shortly before the entry of the U.S. into World War II, critic Nick Selby argues that

… Moby-Dick was now read as a text that reflected the power struggles of a world concerned to uphold democracy, and of a country seeking an identity for itself within that world.[41]