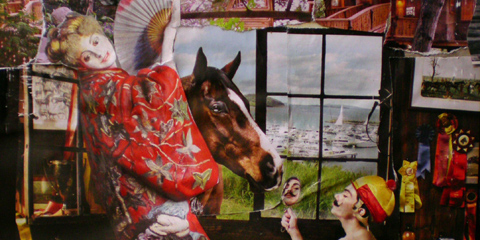 Detail of “Geisha Bath,” a collage by Jeff Raphael from “Cut & Paste” at the Boulder Museum of Contemporary Art. Courtesy bmoca.com

“Experimenting with your own life is the most fundamental medium we have” — environmentalist artist Natalie Jeremijenko, The New York Times Magazine, Sunday, June 30, 2013

“Kevin, why don’t you pick up some of your snips and heaps.” — Kathleen Naab Lynch

Boulder, CO. — An image in print catches your eye and imagination. Out come the scissors. Cut and save — or paste. The idea has ancient wellsprings as a cultural act. Making a collage can be the stuff of child’s play or a sophisticated artistic strategy. If only I still had my big old collage constructed around Archibald MacLeish’ s Cold War-era poem “The End of the World,” which is itself a small verbal collage *

The early 20th century, the Cubists, Surrealists and especially the Dadaists brought collage into modern art. Such movements captured the chaos, absurdity and dislocation of modern existence — of industrialization, immigration, genocide and war. Collage could manipulate and recast heavy subjects with ingenuity, illumination and surprising wit.

Even Picasso’s vast 1937 masterwork of war protest, Guernica, though an oil painting, is influenced by the peculiar tension of imaginative fragment-building that the collage contains.

How different are things today regarding the collage? Cut & Paste, a delightful and fascinating show, begins to answer that question. These collage artists may not have some of the radical agendas and pretenses of, say, the Dadaists. Contemporary art today is a sprawling postmodern collage of directions and trends, of genius and triteness and many eccentric bursts of unpredictable assertions — and associations. That’s partly why collage seems very apt and up-to-date, even timeless.  The medium’s seemingly endless mutability suggests why these artists can entertain, sometimes enlighten and even challenge the viewer.

Most computer users know “cut and paste” as the virtual-reality power to relocate texts and images as we see fit, for creative, editing or even expedient purposes. Increasingly artists exploit the potential of digitally manipulated imagery, which promises to keep the collage mentality alive in the appreciable future, for tech-savvy millennial artists and beyond.

However, one of the most accessible and technically accomplished works in the show is as old-school as a yellowing pulp Superman comic book. Adam Parker Smith’s large six- panel collage “Super Flight”   contains scads of images of Superman lovingly and precisely hand cut by the artist from comic books and assembled brilliantly and ambitiously into a massive composite image. It looks like The Big Bang of Superman, which “mild-mannered reporter” Clark Kent experiences in a sweaty dream he wakes from, forever changed and empowered. 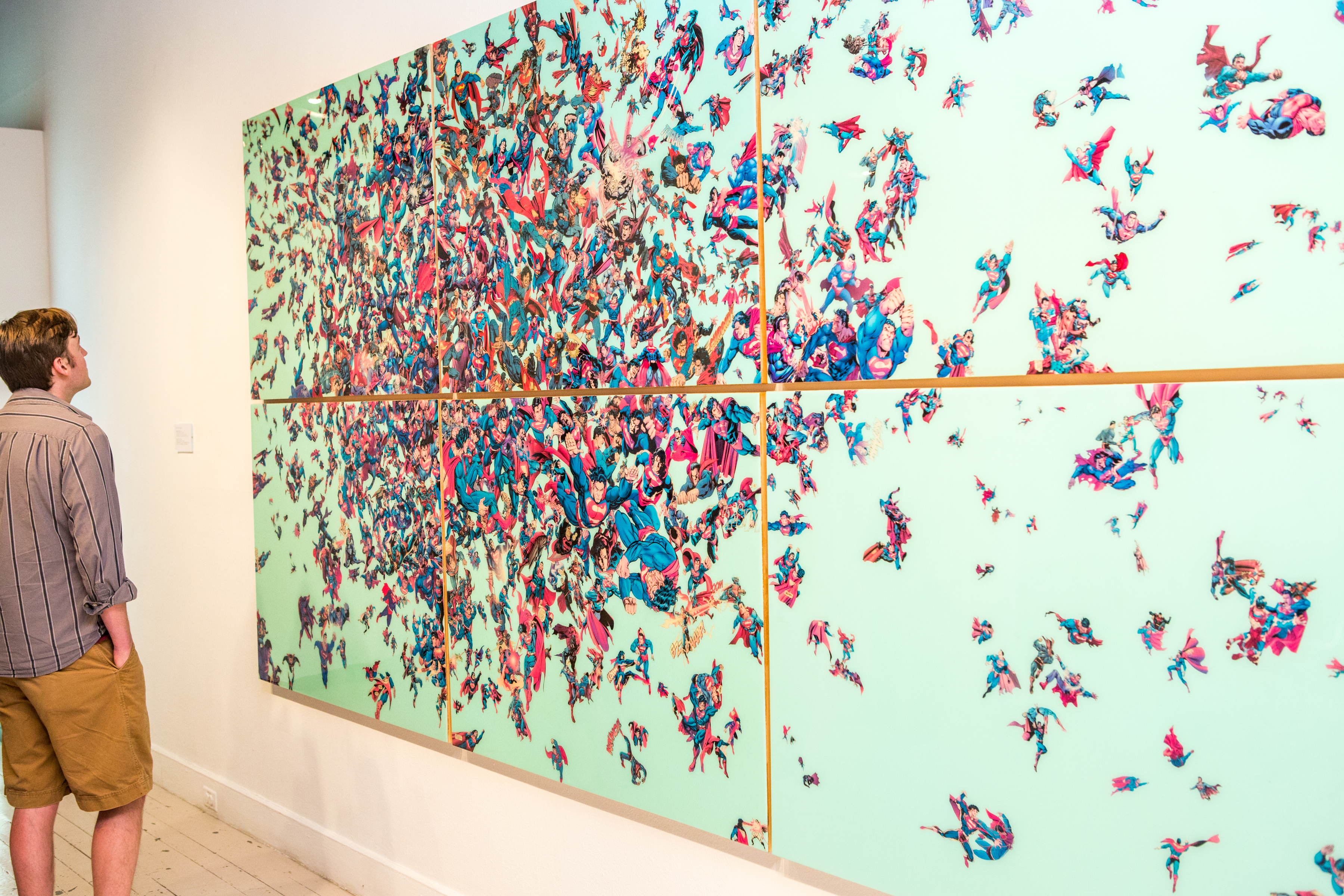 Adam Parker Smith’s “Super Flight” blows away a lot of Supermen, but is it really just a sweaty Clark Kent dream? The super dudes go out with a POW!

“Super Flight” is an astonishing welter of flying muscles, windswept capes, S-emblazoned chests and sound effects: ZAAAAAP! YEAAAGH!, and our hero’s mighty punch – CHROKK! You sense myriad dramatic and dynamic moments in the history of perhaps the greatest comic book superhero. It’s also a testament to Smith’s snip-snip-snip obsessiveness, captured perfectly beneath clear resin. The director of the latest Superman flick Man of Steel should’ve somehow included this powerhouse image in his movie.

Brooklyn-based Smith is one of today’s more provocative contemporary artists. A second untitled work from 2013 is a kitschy, mock-decorative installation on two adjacent corner walls, which includes a miscellany of items arranged on the walls, including cookies, penny candy (Bit o’ Honey!), tiny toy high heels, fake flowers and enough jellybeans to stir Ronald Reagan from the grave to croak, “Mister Smith, tear down that wall. I want to eat it.” I’m not implying questionable provenance of any of these items but The New York Times recently wrote about Smith’s ongoing projects of “collected” art works and various objects that he admits he’s stolen from others, often artists.

“The project has this gimmick, that I’m stealing from everybody, but it’s really about community,” Smith told The Times. “ ‘Appropriation and theft are part of that.’ Scoff if you like. “I feel like so many of my ideas start out as jokes,’ he said, ‘for better or worse.’” For sure, he’s experimenting with his life, and others’ though his “ideals” stray somewhat closer to Robin Hood’s than Superman’s, or Natalie Jeremijenko’s  1 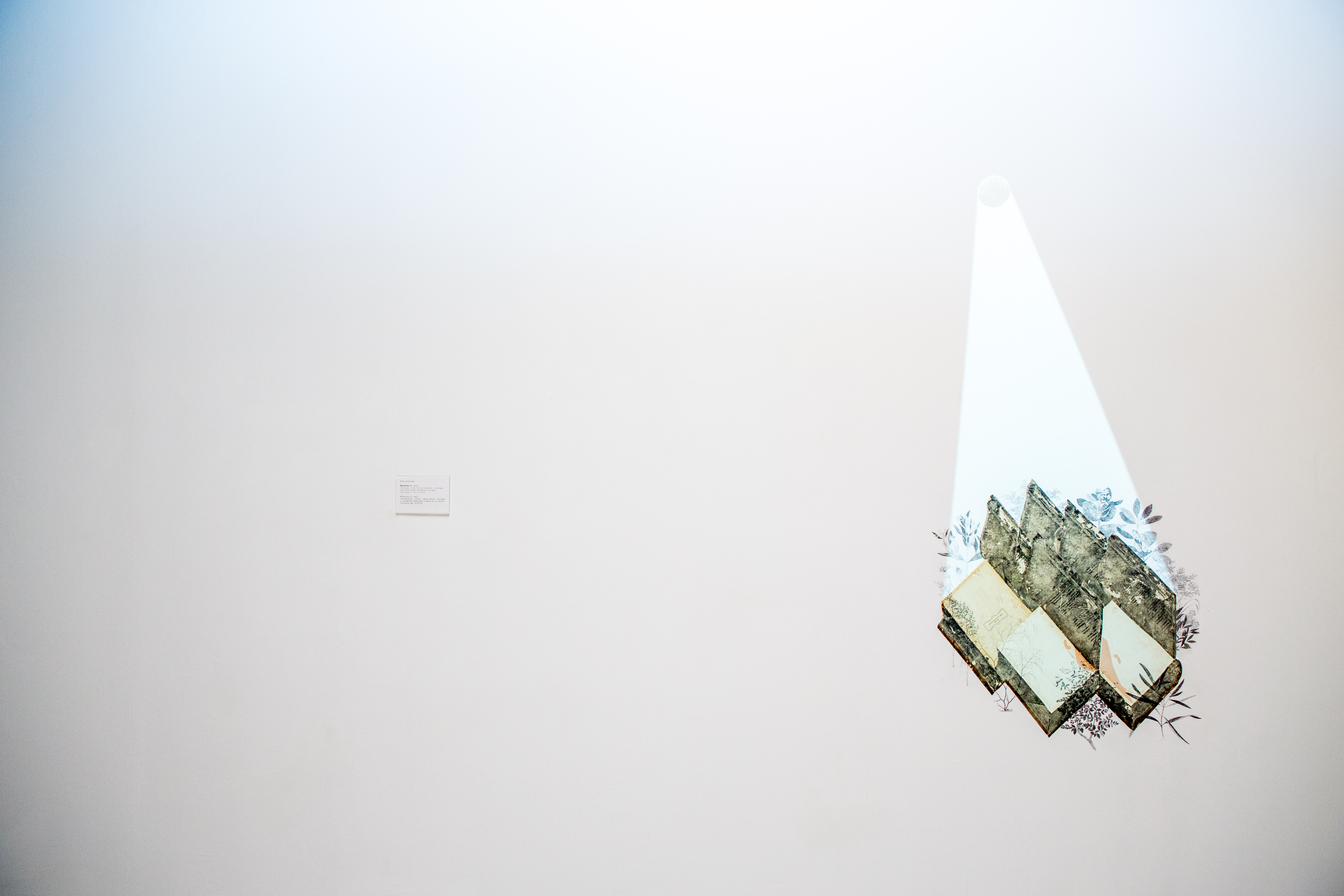 Stab Orlovsky’ s multi-media collages, such as “Nocturne 2,” beguile the viewer as they change over the course of several Zen-like minutes.

These are also like dreams, that you experience while standing there. Both works slyly cajole you to spend at least five minutes because they literally mutate over that time, thanks to projected animation combined with drawing and collage. “Nocturne 1” presents a lyrical, Rousseau-like landscape with back-lit creatures and personages appearing and disappearing. A central image is a mysterious, archetypal woman who seems to oversee the scene like a motherly goddess. Up above, a bird suddenly flutters across the sky. Finally another bird appears, lands, and perpetrates a natural function that, um, shows that even the most mystical of expression emits from creatures trapped in their physical organisms.

Mario Zoots — who bears the best artist’s name I’ve encountered in a long time – has a knack for reaching playing with images of womanhood as black and white evocations of another era. Each of his extended series focuses on a beautiful or alluring woman, some 1950s erotica but many movie star promo shots, like Jane Russell’s Southward-straining dress from her iconic role in The Outlaw or Theda Bara the silent film vamp.

Bara’s famous image shows her hexing the viewer with a transfixing stare, arms akimbo provocatively and flaunting a bra that is a pair of serpents — spiraling around each breast. It’s slightly disturbing, slightly entrancing and slightly camp.  My adverbial modifier is part of Zoots’ doing, because he reworks the original b&w image and often strategically obscures bodily parts. He calls the works “depersonalized” and “desymbolized.” I’m not sure if they work to that peculiar degree of abstraction. But they are clever plays upon erotic fantasy seemingly frozen in an increasingly distant pop culture era that nevertheless opened the door to modern liberated sexual expression.

In terms of sheer aesthetic accomplishment Judy Pfaff takes top honors. She’s been an innovative, prolific, brilliant and acclaimed print maker for many years. The show’s most beautiful work is Pfaff’s “Year of the Dog #7” which combines woodblock print, collage and hand painting. I gather the title references the Chinese Zodiac system, and I’ll tread lightly with such semiology but the year of the dog, like other such zodiac years, signifies both human strengths and weakness. Yet the dog seems to signify good luck, they say.

So Pfaff presents a complex image with Eastern influences in its refined articulation and layered deftness. What might seem ornamental in a lesser artist’s hands is here a stunning matter of artful accomplishment.  Pfaff conjures an almost living and breathing skein of lyrical abstraction, a flying web of unpredictable entwining and airy arabesques. The piece also intimates visual depth that recalls one of Jackson Pollock’s most ingenious and spatially evocative paintings, “The Deep.”

Jeff Raphael’s 30-plus framed collages crammed on one wall boggles a bit, given the concentrated fragmentation of each image. Yet, you discover he’s an old-fashioned visual storyteller. Like one of his maximalist influences, Hieronymus Bosch, this former punk-rock drummer fearlessly rips away the curtain to expose humanity’s strange, silly and craven behavior. 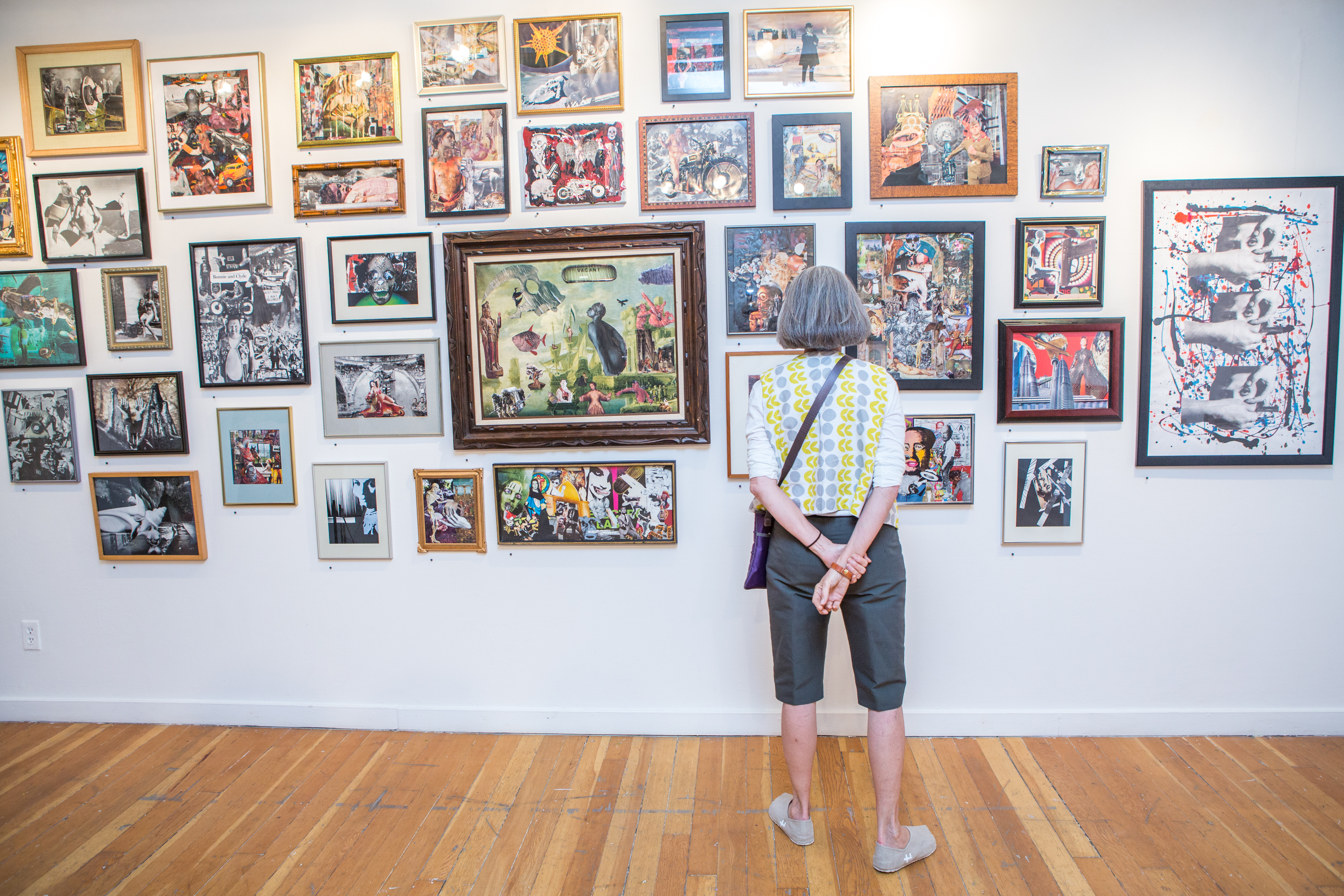 I hope you sense how this relatively small but memorable exhibit takes us near and far in perceptual and conceptual play. Creative collage allows us to follow some artists  in the proverbial leap of imagination that lands on the shifting ice floes of life in an uncertain, ever-changing, terrifying and beautiful world.

The technique might help us piece our own lives together. We have iconic role models for dealing with uncertainty, like thousands of Supermen — in our dreams. More realistically we face life’s fragmented certainties by summoning courage like the slave Eliza’s famous flight, with infant, to freedom across that deadly collage of ice floes, in Uncle Tom’s Cabin.

Other artists in Cut & Paste include Jesse Ash, Tyler Beard and Alicia Ordal.

* MacLeish’s “The End of the World” begins: “Quite unexpectedly, as Vasserot
the armless ambidextrian was lighting
A match between his great and second toe…”