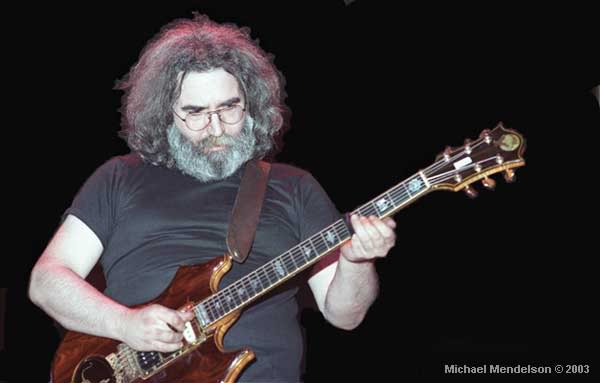 Dicks Pick’s Volumes One and Two — The Grateful Dead, released in vinyl limited editions of 2000 in late November 2012.

Many Deadheads will nod knowingly at my comments, but I’ve never been a true head, who ritualistically followed the Grateful Dead on their pied piper tours. Yet I can imagine doing it, especially after hearing them perform in Columbus, Ohio on the recording from October 31, 1971 from the bootleg series Dick’s Picks Volume 2.

I’ve listened to this before, but not with all my ears and this is a jazz head talking. I don’t think I’ve ever heard any musician sustain improvisations as beautifully as Jerry Garcia does on this evening.

Perhaps such an inspired performance had to open with Dark Star, the band’s quintessential astral jam journey. I’ve always loved the original Warner Bros.recorded version from Live/Dead (a still essential document since the Dick’s Pick’s series is less available, with the new limited edition of vol. 2 reportedly sold out from its original source. However, check with your area independent stores. The CD versions of the Dick’s Picks series show up often in used bins 1). But Garcia takes this to another stellar plane with playing that bursts with crystalline fragmenting of his brilliantly evolved bluegrass banjo-and-blues picking, a song in woeful shards of wonder.

Mastering such technique seems to help sustain improvisation but Garcia takes it where he wants to go, never simply following the finger-memory intervals of his technique, at least not on this night.

Most Dead fans know that Garcia lost his middle finger up to his knuckle in a childhood accident. I wonder, in the end, if he didn’t learn thus to liberate his pick technique, from a wrist-orientation to a digital one, with that middle forefinger not impeding the pick’s motion (see photo above).

Towards the end of his Dark Star solo he comes up with a jazzy rhythmic chording groove which likely arose from rhythm guitarist Bob Weir’s cue, which Garcia said often triggered his rhythmic and harmonic movement. 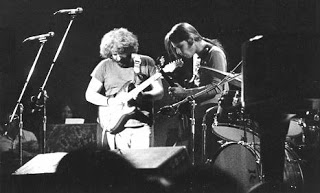 Garcia and Weir jamming in 1973 in Baltimore. Courtesy of www.deadlistening.com  2

As I recall from a 1984 concert at Alpine Valley, Garcia, his chin to his chest, would raise his craggy eyebrows and feel Weir’s fresh musical tugging. Here in ’71, the chording launched him into a soaring flight of lyrical arabesques that brought tears to my eyes as I chopped supper vegetables. I hadn’t gotten to the onion yet. That’s not unthinkable given that I’m something of an Irish sap. But it rarely happens when I’m listening to largely instrumental music.

Lady in velvet recedes in the nights of goodbye…

Here one also hears again how supple and conversational a contrapuntal bassist Phil Lesh is, another spur to the lead guitarist. Then the band reminded me how musical is one of their overlooked early songs, Sugar Magnolia.

However, St. Stephen lost some intensity because apparently lead singer Bob Weir could not hit the higher key they performed in on Live-Dead, and in Columbus the pre-Workingman’s Dead vocal harmonies shamble along. But the playing hovers, luminous and mysterious.

One of the reasons I’d avoided listening to this side again was because the Dead’s second drummer Mickey Hart was missing from the gig and I figured I’d miss the wonderful poly-rhythmic waves the drummers sustain so well. Yet Bill Kreutzmann does a magnificent job pushing the propulsively loosely-goosey Bo Diddley beat of Not Fade Away, a groove so infectious that they come back to the song at the end of the set. Between those two versions is one of the band’s best play-it-in-their-sleep tunes, Goin’ Down the Road (Feelin’ Bad), which the legendary Big Bill Broonzy recorded with the Dead’s enhancements to the traditional song.

Here, as elsewhere this night, Garcia’s pudgy fingers positively crackle, like demons dancing on hot coals. Of course, one of the secrets of this band’s greatness was that it stayed together for so many years and learned how to improvise telepathically, as do the greatest jazz bands. That synergy took them and their ‘heads a long ways down the road, feeling bad, feeling good and a myriad of emotions between. Their many followers proceeded, and grew through generations. And so grew that guitar’s nocturnal eagle cry, echoing forward through The Grateful Dead’s long, strange trip.

Shall we go, you and I while we can…through the transitive nightfall of diamonds…*

2. www.deadlistening.com is a valuable guide to hearing the Dead on and offline.