I ended my last posting with a heartfelt paean to the newest generation of American citizens in their 20s. Even if this may seem like a critique of that same generation, I write with the greatest respect for their potential and intelligence. But I’m compelled by a deep concern about a technological force that seems to have this generation in its grip.

I call it The Deadly Attack of the Smart Phone Zombies. 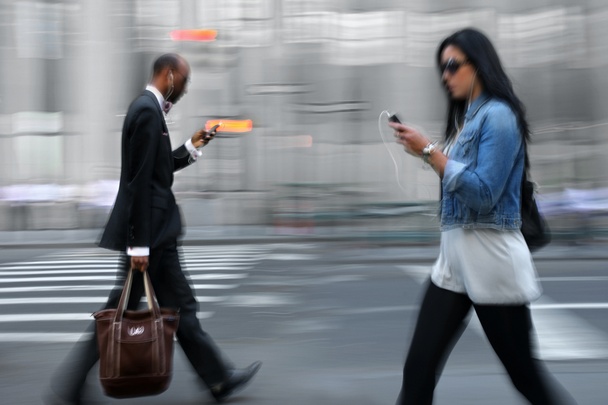 Trying hard to be cool urban hipsters? Or are they devolving into smart-phone zombies? You decide. Courtesy: Shutterstock.

You may recall the classic zombie B movie Night of the Living Dead, where all the decomposed humans who’ve come back to life wander around looking for human flesh. But they are pathetic monsters, in fact — easily eluded or out-run, and whatever intelligence they may have once possessed is shrunk down to their one fixation. But because of that fixation they are relentless — their only power — to kill and feast on human flesh.

In this case, the obvious intoxicating fixation is a darkly gleaming toy in the left hand.  The statistics are horrifying and seemingly improbable regarding its physical dangers(see below), not to mention the social problems. These seemingly innocuous zombies do kill. The notion that someone would be typing a message to someone while driving a car in traffic is so absurd as to be instantly thrown out of a screenwriting brainstorm for The Twilight Zone.

It’s because the people in The Twilight Zone are usually hyper-aware and all too sensitive to the strange goings-on and impossible situations that are closing in on them.

Not these people. And most of them are in their 20s and that’s what troubles and saddens me because it’s clearly a matter of cultural conformity and peer pressure. If you’re not texting or tweeting or adding Facebook friends, you’re just not with it.

Well, the reason you’re not might because you’re dead, if not a real zombie well on its way back to the grave.

1. I went out biking and as I turned onto the pathway that leads to the main East side Milwaukee bike trail to the lakefront I approached a young mother with a toddler. She noticed me and instinctively shooed her youngster over to the right side. I always admire good maternal instinct. Imagine my shock when as soon as her son was safe she began meandering diagonally right into my bike’s pathway, her head down and re-engrossed in the zombie box. I had to break and she finally came to, and almost looked up.

2. I arrived at the aesthetic destination of each of my three times a week bikerides — the splendor of the Milwaukee harbor skyline highlighted by Santiago Calatrava’s addition to the Milwaukee art museum, a wondrously expansive work of sculptural-architectural engineering (more on that next time). A lovely 19th century style schooner drifted across the the bay and of course the birds delight — singing, swooping and skimming, and fanny-flashing ducks diving comically for fish, the surf lapping against the rocks, the elegant expanse of the Hoan Bridge and the humble yet amiably striking Milwaukee skyline. It all beckons the senses.

And yet, at the very moment where this whole scene unfolds before a pausing biker’s eyes, a young woman biker had stopped and instead of beholding the beauty, she had her head down in her zombie box pose. Apparently this was her reward for her exercise. Hel-lo??

3. On my way back, I’m on the very same pathway where I encountered the zombie mother, I now approached a young couple strolling ahead. I slowed down and coasted toward them until the man turns and sees me and steps aside. The zombie smart phone woman is oblivious. I’m forced to come to a complete stop.

I think the guy said excuse me. The woman was walking with the man totally engrossed in her zombie box. This was obviously not a romantic couple. Still, if I were him I would be insulted. I would say, “Roommate, if you walk out into the traffic on Locust and kill yourself, don’t blame me.”

These three instances all happened on one bike ride today, July 24, 2012. Don’t get me wrong. I’m not truly a Luddite. I have my own cell phone and I like to check my e-mail and add friends to my Facebook page — at home. I don’t have a problem with people walking down the street talking on the basic cell phone – much. I’ve even mixed my bike rides a few times with listening to Playaway’s utra-portable books on digital, but I’m not visually distraced. And Skype is mighty cool – at home or at Starbuck’s.

Part of the problem is that many in our society may be becoming addicted to virtual reality. We think we’re really connected but there’s a metaphysical disjunct between true reality and really always being virtually connected. And it seems clear it is a psychological addiction. I’m no doctor, but the best practical definition of addiction still comes from good old AA, and I learned about this because I was a member of Al-Anon, the offshoot support group for affected family members of alcoholics and drug addicts. I was once the husband of a bi-polar alcoholic — who is now dead. An addiction is a compulsive behavior which forces a person to lose control of their life — to where “our lives become unmanageable.”

If your awareness of your moment in the present shrinks to where you are risking lives and safety, your life is becoming unmanageable. You’re moving into zombieland. You are missing out on life, the proverbial flowers in front of your nose.

According to a June 2012 Mobile Mindset Study that extrapolates its results to the entire country, about 60% of us (particularly those 18-34) can’t go for more than one hour without checking our phones for messages, getting online, or whatnot. Addicts are classically in denial so they don’t realize how insidious the force is, especially because the addiction initially seems a great empowerment, and here’s where the devil lies in the weeds or more precisely, in the details.

This is an addiction to minute detail, to all the tiny bells and whistles crammed into that little electronic palm Oz — the games, gizmos, the blue horses, old Friends episodes, ads up the wazoo, and endless fleeting conversations and gossiping going on between fellow zombies hither and yon.

They think they’re smart, cool and connected. Perhaps they are connected and importantly so at times. And there’s no denying the value of cell phones in emergencies. But they do look and behave like social zombies. Or perhaps like lemmings who lost their herd wriggling heedlessly to death in the sea. Or they resemble a ponderous beast of burden, who walk around with their heads down, trying to blot out the dullness, misery and pain of their existence. Those are inherently sad creatures but for very different reasons than the behavior I’m discussing.

And yet, could it be that we humans are trying to compensate for the dullness, misery and pain of our existence? That life might indeed feel as constricted as a beast of burden — if I am addicted to my tiny little talking toy in my fist. We all grow bored with the same toy, no matter how engrossing, after a while and yet if we are addicted, it may lead us into a kind of living hell that we cannot admit because after all we’re cool.

We might keep on doing it until we might eventually crash into each other in our cars while texting each other. The police officer pulls the phone from my death grip and reads on the tiny screen: “Hey dude, want to go see ‘Waiting for God–.’ ”

So this is not just my rant. “For the smart-phone users, they’re totally, constantly engaged with the private sphere, and it’s reducing the basic roles of public space,” Tali Hatuka, who heads the Laboratory for Contemporary Urban Design at Tel Aviv University, lamented to The Atlantic magazine. She sees technology’s darker side, as did Norman Mailer, who once pronounced unequivocably that technology is the devil’s playground.

“This is not a good thing,” Hatuka continues. “The public sphere plays an important role in our communities: it’s where we observe and learn to interact with people who are different from us, or, as academics put it, it’s where we come to know ‘the other.’”

In their surveys, Hatuka and colleague Eran Toch also asked questions about what people remembered of the public spaces they’d visited just 10 minutes earlier: what did those places and the people there look like? Smart-phone users couldn’t remember much at all; in effect, they weren’t paying attention in the first place. This suggests, Hatuka says, that the ubiquitous smart phone may even degrade the way we recognize, memorize and move through cities. We will lose many of these benefits when we’re one day all walking around thumbing our Twitter feeds, The Atlantic reporter wrote.

Okay I’m a baby boomer and I know people still mock us for being potheads. But if we diminish our brains in any manner by smoking pot we also expand other parts of our minds with the stuff and potentially, for millions of others needlessly suffering, herb helps with chronic pain. And most cannabis smokers do it privately in our home threatening no one, except perhaps themselves, only if they abuse the drug.

I mean, we boomers came up with Cheech and Chong movies, man! We know we’re goofs when we’re high and giddy out in public. But the pot joke is ours — on us — man, and by now as old as dirt.

How old is it?

Yep, that’s the historical sense “smart phone” manufacturers are providing in their sales pitches: “That’s so 20 seconds ago!” — the ultimate in smart phone-chic inanity.

Don’t get me wrong, please. I’m not trying to play a generation gap card here because again — I have the highest regard for the 20s generation, probably because they remind me of my generation, of our idealism and our seemingly limitless change-the-world potential, much of which we squandered, or fell prey to cultural backlash. We are still trying to right our wrongs and all the rest of those perpetrated by corrupted Western civilization, in our small — or ambitious — and hopefully wiser ways.

But that’s why I don’t want to see the young citizens I teach make mistakes like we made, because I love these young people, I really do. If they make mistakes that means I may very well be mistaken in my own teaching — especially if I don’t speak up like this. But they’re aware of the problem, to some degree.

Last year, one of my Marquette University freshman English composition and rhetoric students did an eloquent presentation on this very subject, telling of a popular, charismatic high school friend who was gruesomely killed because someone was texting while driving, an extremely powerful testament. The student, a tall, striking blonde, finished on the edge of tears. The classroom was deathly still and then broke into a warm applause. Full of pride, I really wanted to hug her, but I probably would’ve gotten arrested.