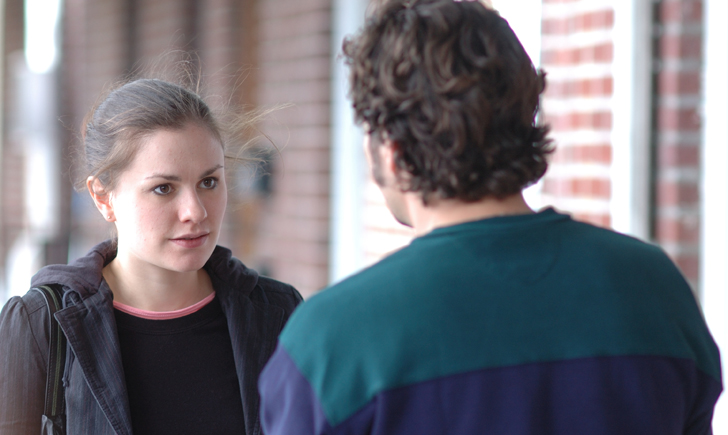 Anna Paquin as Lisa Cohen confronts a bus driver (Mark Ruffalo) about his role in a woman’s death.

Anna Paquin blisters the screen in Margaret in one of the most amazing roles by an actress in a recent memory. She’s a 17-year-old named Lisa Cohen, of deeply questioning intelligence trapped in a vice between forsaken justice and don’t-make-waves conventions. Is it any wonder she’s driven to a virtual primal-scream state? What fuels her internal cauldron is a philosophical question: Can the pure but troubled heart of a teenage girl provide a cue for humanity to reconstruct its legal system so that justice rather than money are served?

That question lurks close to the core of screenwriter-director Kenneth Lonergan’s stunningly ambitious character drama. It has such a compressed emotional and intellectual fervor that I ended up with a slight headache, and yet I wanted to wrap my head around it for so many reasons.

My entryway came surprisingly the next day when I happened to watch film maverick Sam Fuller’s daring 1963 film of social commentary Shock Corridor on TCM.

I doubt Lonergan had this connection in mind but bear with me as we travel into the anguished interiors of Lisa’s mind. She’s a heroine and rightfully and righteously so. Both Paquin’s Lisa and Constance Towers, as Cathy, the female lead in Shock Corridor, appear to be each filmmaker’s voice for social justice, crying in in the wilderness of cynical greed and compromised justice that society has engulfed itself in.

And in both characters, the voice is embodied in a peculiarly sexualized persona which lends deeply Freudian or at least psychological tension to their messages to themselves as well.

In Fuller’s film, Cathy is the stripper girlfriend of Johnny Barrett, the scheming reporter trying to fake his way into a mental ward so that he can write an exposé story and win a Pulitzer Prize. Cathy’s a literate wit who despises Johnny effort to “earn a journalistic halo on the cover of LIFE magazine.” She continues: “Dickens didn’t put Oliver Twist on the couch because he was hungry…Hamlet was made for Freud, not you!”’ She’s personally afraid the “whole Jeckyll-and-Hyde business will backfire and make a psycho out of me.”

In Lonergan’s film, smart Lisa has a little bit of an on-the-edge Hamlet in her, which makes her such a fascinating and loaded character.

She witnesses a horrible death when a pedestrian, played by Allison Janney, grotesquely loses a leg under a bus and bleeds to death in her arms. Lisa feels partly responsible because she distracted the bus driver by selfishly trying to ask him — through the closed bus door — where he got his cowboy hat, as the bus accelerates from a stop.

She first tells police the pedestrian tried to cross against the red light, thus exonerating the bus driver from any guilt. But she can’t live with herself and goes to the police later to change her testimony. Lying hidden in the bloody gutter is a larger case against him and the New York public transit system.

But Lisa’s pressurized, lonely struggle for justice and to safeguard the public spurs her to extreme behavior. She lashes out excessively in a classroom discussion over what was worse — the 9/11 attackers or America’s warring response to it. And her sexuality seems in the grip of her crisis. She rashly calls an unsuspecting friend and asks him to come over and deflower her virginity. Later, with her desperation over the case intensifying, she seduces her exceedingly understanding math teacher (she’s a lousy math student) played by Matt Damon, a confused mixture of fraternal rectitude and mealy-mouthed obsequiousness. 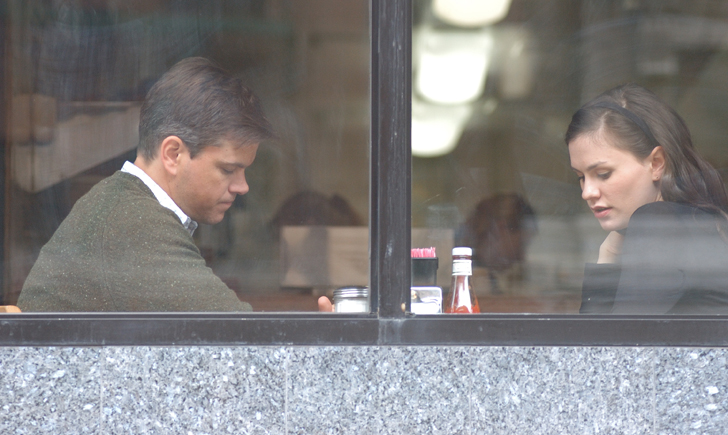 He’s fascinated by this intelligent and torn young woman, whose sexuality throughout is encased in a quivering need for love and understanding — and for a sense of her place in an adult world that goes by rules and conventions that chill her soul. She senses that the math teacher is sensitive enough to understand her.

Lonergan — whose superb but comparatively modest You Can Count on Me revealed his gift for character portrayal, convincingly quirky dialog and a staunch faith in family — shows how deep he can delve in Margaret. Two stars from the earlier film return: Mark Ruffalo cowers and cringes soulfully as the bus driver and Matthew Broderick, Lisa’s  English teacher, reads her class a Gerard Manley Hopkins poem (below) that mirror’s Lisa’s experience. Lonergan read the poem on a recent Fresh Air radio show and named his film after the poem’s character Margaret (but didn’t name his lead character after Margaret, a confusing decision.)

And the director relieves the psychological intensity with cinematic interludes of New York cityscape, including an astonishing shot of a car-choked Manhattan street seen from high above at night. The endless caravan of lights seems to penetrate to the unfathomable depths of Lisa’s darkened soul. The light down there can’t be fully extinguished.

After considerable anguish and doubt she does the right thing — reporting the facts of the incident correctly, but unlike Hamlet she does not have the lethal power for an avenging justice.

I’m not suggesting Lisa is a candidate for a mental institution like the one graphically depicted in Fuller’s film. But the film suggests how close she, and perhaps any one of us may come to a kind of madness — especially if we face harsh systemic realities honestly in a world feeding on delusion and denial.

Her behavior continues unpredictably right to the end of film, but her persistence burns eloquently. And her need for love stretches desperately across the gulf between her and her mother, an off-Broadway stage actress absorbed in her career.

This much exposition seems necessary for this complex film, yet if we pull back and reflect, Lisa’s footsteps lead her into an inner version of the shock corridor of the Fuller film. Here’s where the two films’ fearless exploration of sexuality, complicity and various types of guilt intersect.

After the reporter in Corridor gains admission to the asylum his seductive girlfriend haunts his dreams and conscience. I won’t do justice to Fuller’s tersely incisive and frightening film about how tricky mental delusion can be in anyone. My real subject is Lisa’s tight-rope walk over insanity or deliverance — over the pit where the light of love and justice seems never to reach.

Margaret also gets you thinking about the anonymous, secret millions of dollars that are now turning our democratic election process into a stealth game of attack ads and other byproducts of a corrupted system. Or about Penn State football coach Joe Paterno milking the university for millions in a secret exit deal — exploiting the intense pressure of the Jerry Sandusky sex abuse scandal. Say it ain’t so, Joe, even from your grave.

This remarkable young character also made me think of my recent freshman English composition students at Marquette University. They consistently stunned me with the zeal and passion of their involvement in selected social issues, virtually to a person. These were sensitive, smart and engaged young citizens hardly any older than Margaret. Is it too much to say they may be our damaged democracy’s only hope? I think we must heed and treasure them when they burn brightly as precious jewels of moral brilliance, lighting our way through the darkness of the present.

p.s. after viewing Margaret again in November 2017, I could add a number of comments about this rich work of art.  But I’ll only note how brilliantly real Lonergan’s dialog is. It never sounds written, rather the deep, impulsive utterances of uncertain souls often stumbling against each other verbally, exposing their insecurities and pain. Finally, the borderline verbal chaos melts into a deep, primal hug between Lisa (Margaret) and her heretofore-disconnected actor-mother. This whole tale is pretty operatic. So Lonergan declares art as the spiritual bridge — a simpatico scene mother and daughter are watching from Offenbach’s opera The Tales of Hoffmann.

After reading the Hopkins poem below, see this blog link for an interactive survey of connections between the poem and the Lonergan film: Interactive blog for Hopkins poem from “Margaret.”