I feel like going out on a limb from which I might fall into a sea of rolling eyeballs among the perpetually hip.

But it’s interesting how Hope Springs has bubbled below the radar of most people’s year-end assessments of best movies. And with such superb but ponderously Oscar-seeking “masterpieces” like Lincoln and Argo, it’s no wonder that so many presume slightness to such an autumnal romance drama, even with the heavyweight star power of Meryl Streep and Tommy Lee Jones.

The discriminating yet populist-measuring Rotten Tomatoes critical review site complied a a comparatively grudging 73 per centile ranking among critics for the flick, and only 61 per cent among its viewers. I sense RT readers may not want to be caught in a less-than-serious posture in a social-media arena where everyone’s a critic.

I think the movie suffers from typical critical biases against comedy-dramas geared toward domestic and relationship issues. And despite the trend to a “new sincerity,” the ironic viewpoints that have dominated cultural discourse since the post-WWII existentialists may prompt many to reflexively dismiss a video title like Hope Springs. I did too, until I need a pick-me-up movie after a stressful full week.

I watched the movie last night and felt plenty in my gut and my brain as I laughed through superbly nuanced moments of situation comedy and brilliant acting. And today it feels like something of substance, filled with delectable and uneasy moments that ring as true as an iron gavel pounded in the court of public consciousness, if not opinion.

Rolling Stone’s Peter Travers — the most nominally “hip” among high-profile critics and, yes, a Rex Reed-ish blurb machine — notes that the movie “has all the earmarks of a mawkish Lifetime movie.” And yet Travers concludes, “Hope Springs knows happy endings are provisional.’’ That’s a succinct measure of the story’s spectrum of expectation and realization.

Strung between these two storyline poles is a surprisingly tough-minded movie about hetero relationships and marriages. And yet, in a comic twist, the couple gets sex tips from a gay author’s book.

Both main characters wear spectacles throughout, signifying the self-imposed perceptual and psychic walls they’ve built up over 30-plus years. Yet Kay (Streep) yearns to rekindle the love and sexuality they once enjoyed. So she virtually blackmails hubby Arnold into a plane trip to see a renowned marriage counseling specialist.

As much as Streep sparkles and plucks heartstrings like a wounded angel, we can thank Jones for that the movie’s sinewy strength, because his repressed, stick-in-the-mud Arnold has a sharp mind and with pointed, if flawed, repostes to marriage counselor Steve Carrell’s probings. It’s true that Arnold and Kay’s characters don’t develop much but beyond typically wronged wife and insensitive husband. Within those limits these two give us as much laughs and gut twistings as one might hope for. Playing it completely straight, Carrell convinces as the therapist partly because of his usual persona’s tension of between goofy romanticism and mocking cynicism.

So his foil to Streep and Jones’ comic turns works with surprisingly consistent emotional plausibility and at times tense gravity. After all, Jones is essentially a dramatic actor and there a few craggy faces and manners that undercut creeping sentiment as well the man who tracked down the fiendish mass murderer in No Country for Old Men, among his many other gritty dramatic roles.

Full disclosure: Part of my response to the film derives from my personal experience with marriage counseling. Sadly my spouse and I were “fired” by the counselor who felt we weren’t on-task enough.

But that guy, a therapist with a somewhat successful book, was a little too self-servingly careerist to bother with our unsure missteps to the core of our issues (I never mustered Jones’ screw tightenings on the therapist’s presumptions, but I was in overwhelming  pain at the time.)

Yet Carrell’s counselor remains nonplussed with his eye calmly on the ball, and he cheerleads after the couple fails in their first full sexual re-encounter: “You guys fumbled the ball on the one-yard line and a few days ago you weren’t even in the stadium!” 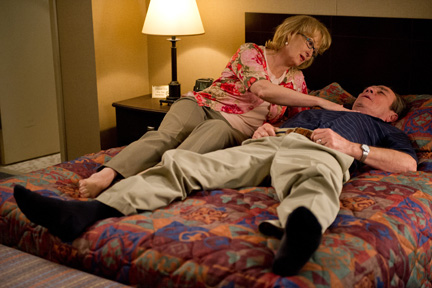 Hope Springs reaches way down in the flinty depths of Arnold’s long-dry well. A series of such determined probings by Kay and the therapist are painful and sometimes hilarious.

The couple experiences mortifying and heart-wringing setbacks in the series of “intimacy exercises” the counselor assigns them. AndArnold proves the most vulnerable, with unsurprising performance issues for a man who can’t remember the last time he had sex with his wife.

Their two actors’ largely physical comedy in an “exercise” in a movie theater at a French movie is as visually effective and touching as anything Chaplin could’ve mustered.

They finally open up directly to each other in one therapy session: “Watching the boring golf shows with you is like being married to ESPN,” Kay says, which leads to a classic male-female dichotomy:

One of the film’s most powerful and poignant scenes occurs when the counselor cajoles from Arnold his best sex memory – – getting Kay on the kitchen floor when she was deeply pregnant, with surprising tenderness. “She had a little bitty apron that was getting too small because her round belly…”

So his sexual attraction seems also for the fecundity of motherhood and the incalculably powerful promise of a new family.

Yet this plays as strictly an empty empty-nesters story with their children, Brad and Molly, virtually invisible in the background, a large issue the movie probably should’ve addressed.

Nevertheless, this is a PG-13 yet “uncool” movie that parents might encourage their teens to see, to gain insight into relationship challenges that undo many marriages and send offspring into a wrenching tailspins. (Imagine inserting into this story a vividly depicted teen on such a precipice, like the gifted Morgan Saylor as brooding Dana Brody in the brilliant Showtime series Homeland.)

Baby boomers with empty-nest struggles are accumulating like cast offs in a massive junkyard of the lovelorn, so this movie does feel like a kind of Zeitgeist touchstone.

And within its genre limits, the steady counterpoint among the film’s three central characters sustains an emotional suspense that heightens the tension-releasing comedy.

Such storytelling quality in the hands of such masterful actors is something worth acknowledging and considering for the substantial relationship content this movie trafficks in.

There ought to be an Academy Award for Best Comic Dramas, or even for Best Romantic Comedy, instead of movies like this butting up against the granite long-shadow Lincolns of the world.

(Spoiler alert:)  The innate chemistry between these two tough-hearted spouses makes the final inevitable “feel good” payoff plausible and gratifying. Kay vows to watch more golf programs with him and Arnold vows to watch fewer. Between them, you sense they can aim at a par, with the steadying confidence of shared hope.