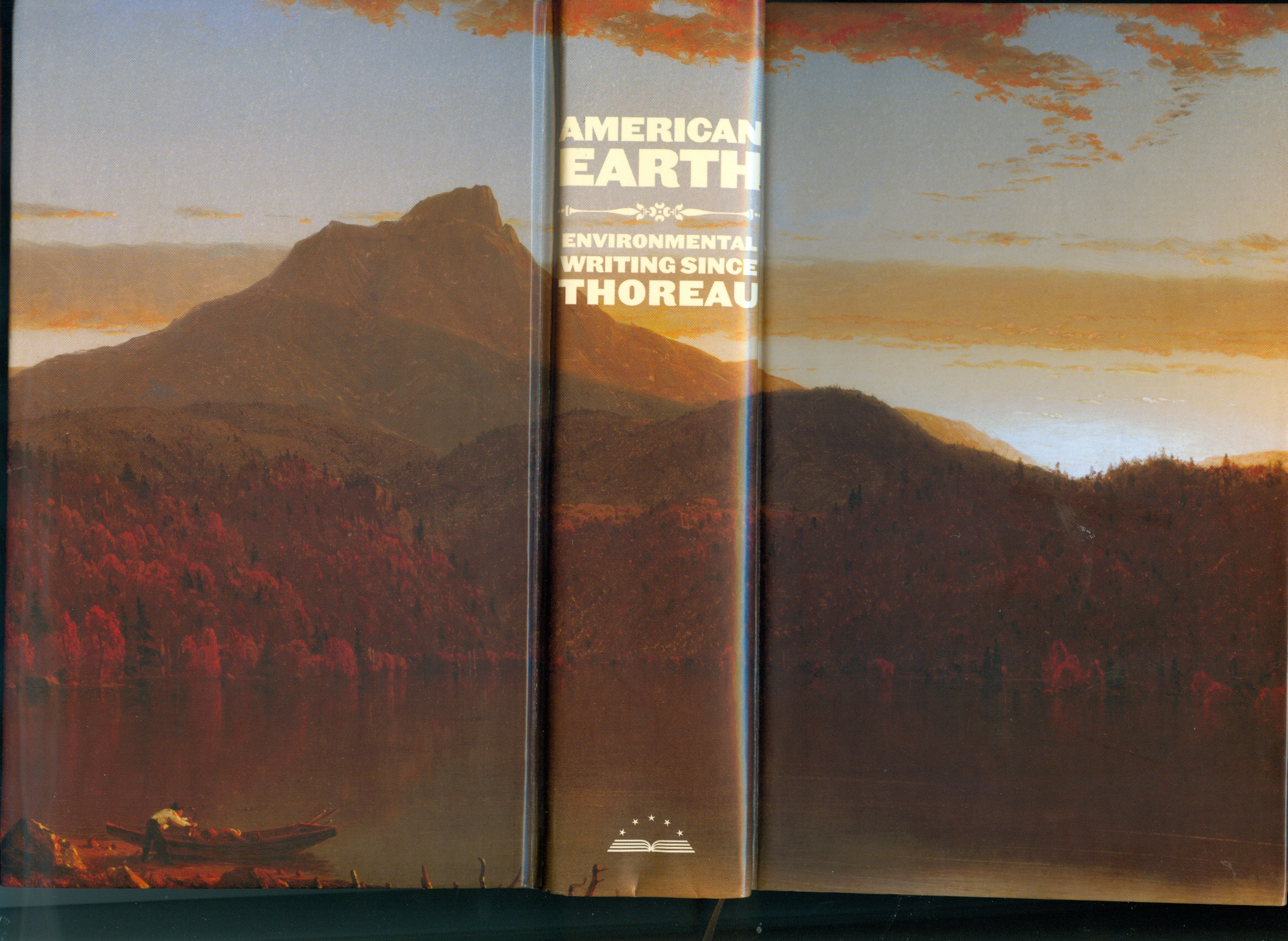 “If we read of one man robbed, or murdered, or killed by accident…or one cow run over  on the Western Railroad — we never need read of another. One is enough…. If we respected only what is inevitable and has a right to be, music and poetry would resound along the streets. When we are unhurried and wise, we perceive that only great and worthy things have any permanent and absolute existence…” — Henry David Thoreau, from Walden; or, Life in the Woods (1854)

Having already commented on a killing or two, I hope to abide by Thoreau’s dictum, but I won’t do so slavishly — if murder or mayhem sadly serve to illuminate a cultural point. But I sense that neither serves very often. — KL

By the way, I revisited Thoreau via an excellent anthology I recently purchased at Woodland Pattern Book Center in Milwaukee.

The volume is titled American Earth: Environmental Writing since Thoreau, edited by the indefatigable environmental writer and activist Bill McKibben. It’s a splendid and gorgeous 1,047 page volume published by the redoubtable Library of America, replete with a ribbon bookmark and a stunning wraparound hard-cover reproduction of Sanford Robinson’s superb landscape painting “A Lake Twilight.” In a bookstore, look for the dust cover, with a handsome graphic image of a bald eagle formed by a montage of living flora and fauna (below, jacket design by Roberto de Vicq de Cumptich).

This admittedly long lists of authors and artists gives you an idea of the samplings of essential environmental advocates, and some unpredictable but compelling names.

For example, Philip K. Dick is best known as a dystopian science fiction writer and anthology offers a brief section from Do Androids Dream of Electric Sheep? his 1968 novel upon which the famous futuristic film Blade Runner was based.

McKibben aptly comments that Dick’s dystopian bent comes from ” the prediction that human scale and human values may not survive their inevitable collision with new technologies — technologies whose demands and dimensions may come to overwhelm our own.”

And here’s a choice passage from “Androids”: “For a long time he stood gazing at the owl, who dozed on its perch. A thousand thoughts came into his mind,  thoughts about the days when owls had fallen from the sky; he remembered how in his childhood it had been discovered that species plant species and become extinct and how all the ‘papes head reported it each day — boxes one morning, badges the next , until people had stopped reading the perpetual animal obits.

He thought, too, about his need for a real animal; within him an actual hatred was more manifested itself toward his electric sheep, which he had to tend, had to care about as if it lived.”

It’s interesting to speculate through time, whether Thoreau would have continued to read news of the extinction of each species, given his statement quoted above.

I suspect he would’ve read on, in profound dismay, because I think Thoreau judged each species “great and worthy things” of “permanent and absolute existence,” despite their existential vulnerability. He understood each species’ role in the ecological whole far better than most of his contemporary Americans, who were ravenous to pillage and exploit America’s natural bounty as much and as fast as possible.

Another photo, Robert Glenn Ketchum’s color “The Chainsaws of Summer” depicts, with graphic elegance, the ravages of clear cutting of the Tongass Rainforest in Alaska in the early 1990s.

Among noted artists contributing images are Ansel Adams and Robert Rauschenberg, and you’ll find iconic photographs of John Muir, Rachel Carson, Aldo Leopold, Gary Snyder and Julia Butterfly Hill, among other major environmental figures; several images of Walden Pond including Thoreau’s own manuscript survey; a startling photo of thousands of buffalo skulls piled up at the Michigan Carbon Works, a Detroit charcoal fertilizer factory (c. 1880); and “The Blue Marble,” taken by an Apollo 17 crew member, which was the first clear photograph of an illuminated whole Earth.

American Earth encompasses — and emenates a clear sense of — the deep-rooted, still-growing trunk of environmental writing and art, which have risen higher and more powerful in ensuing years.

It’s a hefty-yet-portable volume that you might be tempted to tuck into your backpak the next time you hike into back country, or enter urban nature refuges. At some points on your hike you must pause, as Thoreau consuls. Then he, and all the rest of these excellent kindred spirits, will be waiting for you. 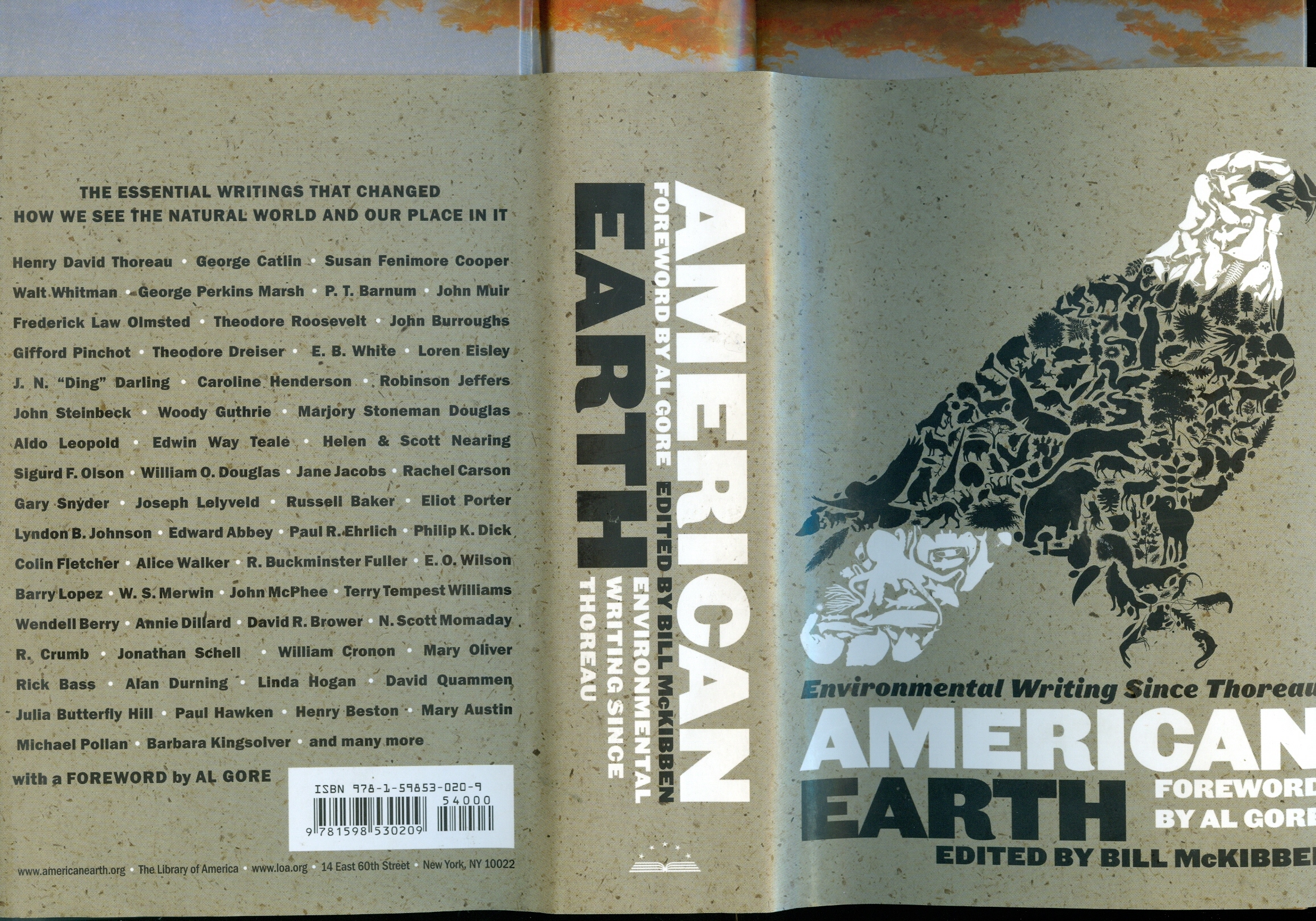