singer-songwriter, and what makes him or her so special. I referred to Jeffrey Foucault’s 2006 album, Ghost Repeater, which just returned to my CD spinner, like a ghost repeater killer on a mission.

“Ghost Repeaters” are the deserted radio stations used to fill the nation’s airwaves with formula music programs, playing to everyone and speaking to no one. That title song exemplifies a message song embedded in poetry, a gospel-folk protest of sorts. It describes what’s left when you tune out the buzz of formulaic pop radio. You hear the voices that live with you and in you – your life and community.

This album is full of art songs lying in the folk mode dust, like an old rattlesnake a lot of folks won’t notice. But you risk getting bit hard and never forgetting, as you might bleed from that small heart wound for the rest of your life. At one point, Foucault tosses out the line “Nothing is forever, nothing is in vain.” If that’s not a vintage dualism of the haunted American heart, I don’t know what is. Producer and lead guitarist Bo Ramsey  makes the music dusty, simmering and slithery. Foucault’s voice seems to emanate from a boot heel mark that contains the imprint of truth, along a dirt highway. So the voice aches and moans as if it needs to hoist its heart from the ground to slake a desperate thirst. This funky but eloquent vocal instrument gives these lyrics rare grit, life and resonance.

“One for Sorrow” is an unassumingly gorgeous creation that toasts sorrow by kissing it goodbye, knowing full well it will return, in time. It’s remarkable that this song emerges as an ode to joy by repeating a descending scale, with a slight upward inflection at the end. It’s partly the underlying chug-a-lug rhythm and also Kris Delmhorst’s delicious, warm-wind harmonies. You see, there is perhaps a trace of autobiography in this song,* and she’s a marvelous singer-writer in her own right.One for Sorrow

But here’s where we dig into a lyric and the next song, “Train to Jackson,” shows that this album won’t let you go with the tender ecstasy of new marriage and having “a hundred babies,” as gratifying as the moment feels. Jeffrey Foucault Photo credit, right, Roman Cho 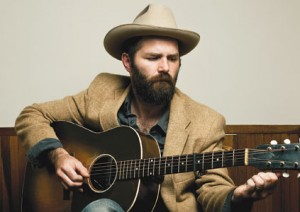 Foucault doesn’t proceed to deny that blessing but, given a larger picture, he crafts a mythic American persona in the way that Bob Dylan has done time and again: “Born full grown and raised up wild/ All mortal bones and passions piled/ upon my head the blessed child/ the father of  the man.”

In “Train to Jackson,” this pile of mortal bones is on the run, for an unknown crime or perhaps unjustly accused transgression. And yet we learn: “A cold black rain was falling down/ l lay my head on the red clay ground/and slept for a thousand years/I woke into a fever dream/where silence talked and money screamed/and nothing was but only seemed/and no one seemed to care.”

Then he shines the flashlight into his own guts: “I cut my teeth on the bread of pure temptation/I tried it all and learned to fall/Like I would never hit the ground/I met a ghost who looked like me/I asked him, ‘Is it plain to see, or is it hidden?’ But he never made a sound.”

It’s best to simply follow along as Foucault rides this one home, or wherever he’s destined:

I was a lion in the circus ring

so I set all my clothes on fire

sold my soul to any buyer

and wrapped my heart and concertina wire

and showed it for a song.

I cut and run ran until I stumbled

I struck out alone a rolling stone

Forty days came up and down

I chased the river to the source

I met a girl on a pale horse

She pressed her fingers up against my lips

and I fell down dead and gone.

So, does he die from a gunshot to the back? Or was he a ghost all along? Or is this a dream?

If it is a dream, is it a slice of the proverbial American Dream, something we can hope to carve into reality like a lonely scout wandering the Wild West, “chasing the river to its source,” scratching out his own definition of self, survival and humanity and, just maybe, love?Train to Jackson You Tube

That’s all for the listener to decide. What you might admit is that here Foucault approaches Dylan, at its best, in Faustian American myth-making. (Compare this to, say, “Ballad of Hollis Brown” or “All Along the Watchtower.”) Or perhaps you might think of Cormac McCarthy or even, if a tsunami crashes over the dusty trail, a wisp of Melville, still perhaps the greatest American myth master, and an influence of Foucault’s. Maybe Professor Fuddydud will object, this isn’t poetry as he teaches in 101, but who the hell cares?

Poetry, or prose — or lyric — worthy of savoring and pondering, can arise anywhere, when the talent, will and circumstances allow it.

Remember, we’re talking here about a myth song, myth not as falsifying but as truth-evoking, as shaping and defining a sense of reality or identity that might resonate through cultural history and perhaps into the future –even if the man falls down dead and gone, at the very moment she pressed her fingers up against his lips.

In death, perhaps the myth truly rises to life.

Foucault’s most recent album Horse Latitudes is also recommended. Though it has a slightly darker overall cast to it, the man’s poetic and storytelling powers continue to grow, as his soul ages well.

*when I e-mailed Foucault about the biographical aspect of “One for Sorrow,” he replied: “I don’t tend to correlate the linear facts of life with songwriting. Songs have their own lives and  narratives, more semantic than episodic. Fair enough to say the song is mainly about Kris and  leave it there – married or not is of no moment. It could be about other people, and hopefully it is every now and again.”