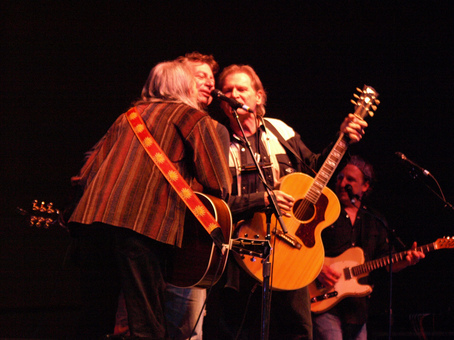 The Flatlanders seem to embody the restless and intricate cultural development called roots music. When they performed last night at Potowatomie Casino in Milwaukee, you could immediately sense the communal and, in this case fraternal, motivation at work. They’re surely brothers in Lone Star spirit, if not blood, having all been born in dusty West Texas as they retell it.

Retelling is the essence of their art. Joe Ely, Jimmie Dale Gilmore and Butch Hancock are first and foremost gifted storytellers who pour memories and consciousness into their musical ingots with all the fire and color of Now Again, arguably their best album, with its cover photo of lightning in a blazing curve of synchronization with a rainbow, over a deathly flat-line Texas plain littered with an abandoned hay thresher and tractor tires.

We’ve seen plenty of “super groups” in pop music come and go. Among American vernaculars, the most notable was The Highwaymen, but two of them, Johnny Cash and Waylon Jennings, are no longer with us. Another trio of great Texas songwriters — Townes Van Zandt, Guy Clark and Steve Earle — was documented together on one recording Live at the Bluebird Café, but that was never a formal group.

As their name suggests, the lower-lying Flatlanders dwell a notch below The Highwaymen in the pantheon of roots music glory, but maybe that’s why they’ve survived, unlike hard-livers like Cash and Jennings (or Van Zandt). And Friday they carried no great pretenses about their legacy-in-progress, yet they know it’s rich with meaning. For that matter, they weren’t even the headliners — that honor went to fellow Texas bluesman Jimmie Vaughan and his Tilt-a-Whirl Band. That may be because Vaughn’s buzzing brand of electrified blues fit the mood of a casino better.

Early in the concert, Joe Ely commented that in “The Flatlander tradition” they’d just released a new album that was recorded, um, in 1972 – and which they’d plumb forgotten about. The Odessa Tapes were recently discovered by an archivist. There’s the somewhat myth-busting nature of the band’s history, in which a fine idea of an actual working band was hardly ever realized in the early years.

As many roots music fans know, they led their own groups or solo projects, as suggested in the self-deprecating title of their extremely belated debut album More a Legend than Band, also recorded in ’72.

And yet there’s a sense of history in that title, of course. So the trio of Texas troubadours tells personal, cowboy-colored tales but also trace details of the atmosphere and the landscape of those expansive yet stiflingly arid vistas. A prime example is Jimmie Dale Gilmore’s “Dallas,” one of their actual hit singles from the debut album. It’s just as telling how radically the group has retooled a song that originally emerged as a ballad. After Gilmore offer the opening verse in a reflective vein, Ely raised his arm and commanded the band to kick it off. Suddenly “Dallas” morphed into a bucking stallion, as the supersonic rush of a DC-9 refocuses upon the power and high of flying in a big airplane. That doesn’t distract the narrator from his wry observations, which turn “Dallas” into (danger: mixed metaphors dead ahead) the rich man with a death wish in his eye, and the woman who’ll walk on you when you’re down.

Of course, the perpetually romantic troubadour will never travel far without forgetting the people and especially the woman he left behind. So Butch Hancock’s ode to “Julia” sounded as fresh as the first spring he ever encountered her; after all what’s “a few miles between the beauty and the beast”? So he recalls when sun dogs bark and bark and ‘round my dream/ in a three-ring circus rockin’ around the sun /the taste of fire in Julia’s name /right there in the tip for my tongue. The song’s mantra-like one-word refrain “Julia” was born for three soulful voices in harmony like these. Soon The Flatlanders had the crowd in the palm of their collective hand and Ely commented, “I feel like I’m right where I belong,” a nice segue into the song title bearing that very phrase. Even if this was an ultra-modern high-tech casino rather than a stinky barn, this felt like more of a shit-kicking gig than a coffeehouse setting, so the band’s underlying irreverence prevailed, especially with the law-mocking “Pay the Alligator.”

Nevertheless, I would’ve loved to have heard “South Wind of Summer,” which closes Now Again, perhaps the group’s most beautiful shared impression of nature and humanity and our relation to it: “When the south wind of summer sings through the trees/and the high mountain thunder hangs low in the breeze.

The song’s finely wrought internal rhyming echoes the strength of its shapely architecture like a range of majestic mountains, which I suspect every flatlander yearns to saddle up a horse and head off for.

It’s a bit like Townes Van Zandt’s songs about the Colorado Rockies, which were actually his second home.

But roots music is about understanding the value and meaning of the place you come from. And for the mountain of talent these three men represent, they still know their fraternal roots and actually ended their encore with a Van Zandt song, which is almost becoming a fashionable thing to do.

“White Freightliner Blues” was surely written as a love-hate ode to that songwriter’s troubled relationship with cocaine. These friends of the late Van Zandt, who died at age 51, understand that well — even if they’ve never been hooked on the stuff. Because there is something about listening to those big wheels whine, out on the highway.

That keeps them on the road. I’m glad the road’s never been too steep for The Flatlanders to periodically gas up and go when the spirit, and perhaps a payday, moves them. So it was off to the big Northern Lights casino, a sure-bet payday if they’ve ever seen one.

It was also a brotherly gesture for these road warriors to bring Milwaukee’s own vernacular music master Paul Cebar up to the stage, to sing and play on the closing song of their set, the traditional blues “Sittin’ On Top Of The World,” (do you still doubt my mountain-hankering thesis?) 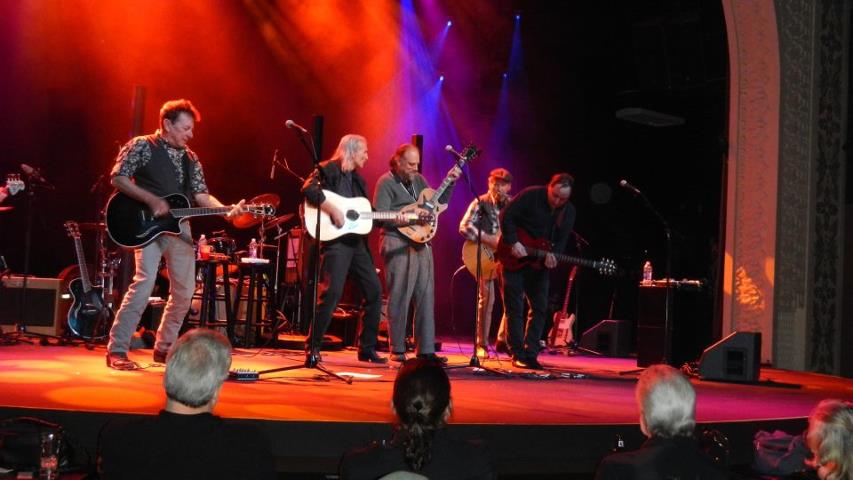 Blues guitar slinger Jimmie Vaughan, not incidentally is very worth checking out. This is sort of another fraternal story, another tragic one, of actual blood brothers. Jimmie’s brother Stevie Ray Vaughn is long gone, his story has been told many times. That may be one reason why Jimmie has had enough and didn’t even refer his bro, though he did offer up a cover of Stevie Ray’s signature “Texas Flood” without mentioning its source, a gesture eloquent in its reticence.

He probably processes his grief and whatever feelings that surely linger for his brother through his own powerful style, a greasy lowdown and horn-rippling roadhouse of blues. His veteran singing compadre Sue Anne Barton came out to belt a few and “kiss hips” with the main man. Vaughn, whose throaty singing style somewhat recalls the late Paul Butterfield, deals his loaded deck mainly from his white Fender Telecaster, which he even pulled back behind his head for a show-stopping solo.

Man, what do they put in the water down there in Texas? I gotta get me some of that.