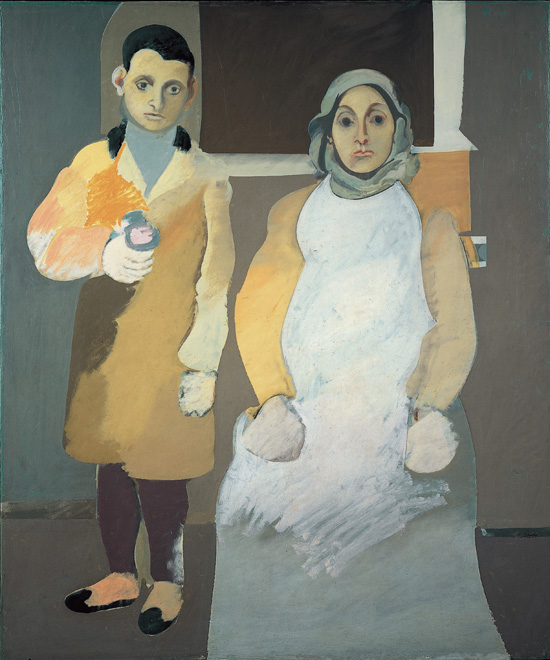 The Artist and his Mother Arshile Gorky, oil, 1926–36 Courtesy calitrev.com

Motherhood is as universal a human experience as it is distinctively personal and intimate, and a measure of a woman’s intelligence, soul and character.

That’s why I have great respect and admiration for all you — my sisters, relatives and friends — who’ve had to answer to “mother” or “mom” or even to “hey, ma” or “gimme the ketchup” or “Can I have the car keys?”

Or to even greater challenges to your will and wisdom like “Did I really come from a baby seed catalog?” or “I’m almost six and all the other kids have smart phones.”

Try to remember you can only do so much, and know when to let them go, so they flourish in ways that will surprise and even astonish, and inspire pride you never imagined.

Because from your womb, love and nurturing they find their own special genius as whole persons. At that point, a son or daughter completes the evolution of universal growth to the unforgettable human, with your beautiful imprint, who belongs to the world.

Courtesy The Art Institute of Chicago

The above message and images were sent earlier today to a group of sisters, relatives and friends whom I felt were richly deserving of my personal sentiment.

I tried to avoid mawkishness for considered sincerity. And when I quickly thought of these two images to accompany it, I realized how much my sensibility has been influenced by the great Armenian-American artist, Arshile Gorky.

That’s when I decided to extend this personal Mother’s Day greeting to everyone online, because, as I say, the experience of motherhood is universal for all children, as well as mothers.

And yet, as I made my e-mail list, I realized I didn’t know as many mothers well as I would’ve thought I did at this point in my life. I won’t go into personal reasons why that might be, aside from being of a childless single person. But for Culture Currents I also wanted to share some thoughts about Gorky’s extraordinary portraits, which lack any trace of conventional sentimentality, and yet are profoundly imbued with love and feeling, and with a sense of history that traces the importance of motherhood as, not inconsiderably, a sort of spiritual talisman.

Notice that Gorky spent a full decade working and reworking the portrait of himself and his mother. I think he was grappling somewhat with how to resolve his visual representation of his relationship to her. Part of that comes from his modernist painterly approach which delved into rough-hewn textures and colors that opened up the inquiry into modern being, in a manner that classical portraiture handling could not.

As Gorky wrote to his sister Vartoosh on November 24, 1940: “Aesthetic or highest art is that which responds sensitively to complexity and thereby enables man to better understand the complexity.” 1

The fact that he left the work unfinished also perhaps reflects his unresolved and complex feelings about his relationship with his mother. There’s also a testament, in those almost wind-blown branch-like strokes at the end of her apron, which might signify children fallen from the maternal tree, and thus witness to the full cycle of maternal experience.

And while Gorky broke away from classical portraiture he also grew out of it and understood its distinctive strength qualities. So he composed a rather formal posture of the two figures, which saves the work from any sentimentality or undue romanticism.

And of course his deeply accomplished charcoal portrait of his mother reveals his underlying mastery of classical technique. Here you see something that’s intensely evident in all three faces in these two works. What I see in that portrait is the indomitable strength, courage and love of a beautiful mother who has endured a racist genocide and exile during the Ottoman occupation of Armenia.

“She was the most aesthetically appreciative, the most politically incisive master I have encountered in all my life… Mother was Queen of the aesthetic domain,” Gorky wrote.

“Lady Shushanik (‘Lovely Lily’ in Armenian), established his artistic formation, engulfing him in art and assuring he not abandon the calling thus forged,” wrote his nephew and biographer Karlen Mooradian. 2

Young Arshile, whose given name was Vosdanik Adoian, and his sister Vartoosh, fled from Armenia to America. 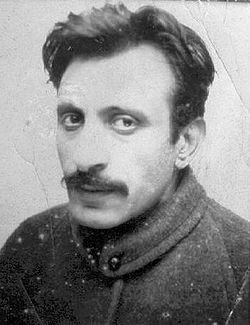 After I visited the great Gorky retrospective at the Guggenheim Museum in New York in 1981, I had the opportunity to visit Vartoosh and Karlen Mooradian, her son and Gorky’s nephew, who wrote a Gorky biography and a “documentary montage” of recollections and Gorky letters.

They both lived in Chicago at the time. They seemed to appreciate the Gorky retrospective review I had written, and that I was an artist as well as a critic. I regret that I was never able to do much with that interview. I do recall them as two people of serious, kind and sincere feeling.

But Vartoosh had previously recalled the hellish time when the Turks massacred 50,000 Armenians: “We walked day and night with little rest. We had no food to speak up. If mother found anything she would give it to Gorky because you take more care of boys than girls and he was the only boy and he was very thin.”

The family’s father had emigrated in 1908 to the United States to avoid conscription into the Turkish army. Conditions worsened for the fatherless Adoians and on March 20, 1919, the mother died of starvation at the age of 39. Gorky, 15, and Vatroosh, 13, became virtual orphans until a family friend helped guide them to Athens and the liner SS Presidente Wilson. The siblings arrived at Ellis Island on February 26, 1920. 3

And yet it’s clear in Gorky’s soul-piercing charcoal portrait of his mother that her flame still burned brightly within him.

Vartoosh was the person closest to Gorky throughout his life. So I offer this photograph of her and her own son, which Karlen gave to me, as a portrait of two of Lady Shushanik’s offspring. 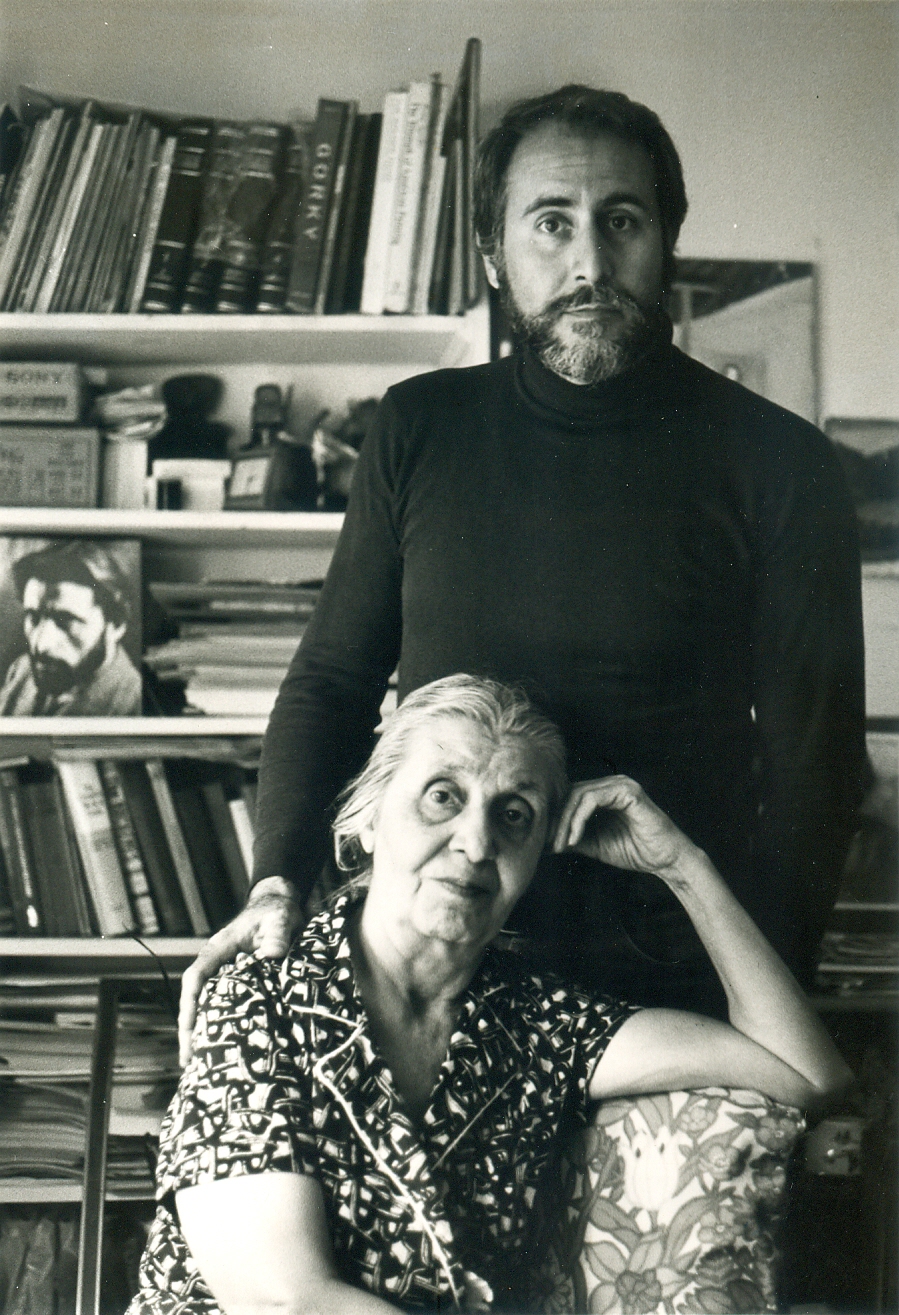 I think it provides symmetry to the Gorky painting. Lady S’s descendants — another mother and son — somewhat echo the Gorky portrait of himself and his mother. Here they sit comfortably and warmly together, without any evidence of direct existential suffering (except perhaps in Vartoosh’s eyes) which surely affected Gorky and his mother, who curiously avoided contact with each other (the painting was based on a similarly composed photograph portrait).

Those two painted figures still haunt me. Because, without Gorky’s courageous and tragic Lady Mother, the world would have been robbed of one of the great artists of the 20th century.

3 thoughts on “A remarkable Mother’s Day story of an unforgettable “Lady” and her gifted son, Arshile Gorky”