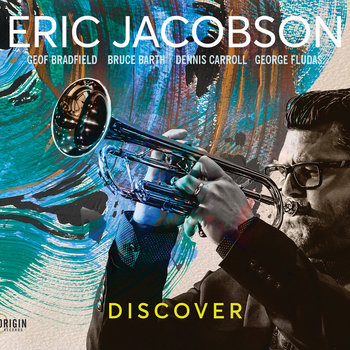 Eric Jacobson blazes. In person, the naturally powerful Milwaukee trumpeter has long conveyed the impression: “I’m gonna cut anybody here, and all comers.” That’s fueled some willfully dynamic solos. With trumpet poised, his muscular angularity recalls an Italian Futurist sculpture. So, Discover comes as a surprise, perhaps as a self-discovery, trading competitiveness for musical and artistic maturity.

The tune “Discover” arose from the experience of his father’s death, prompting a “search for meaning and personal identity,” writes annotator Rick Krause. The album opener “New Combinations,” has a Jazz Messengers ensemble feel, amiable yet muscular. “Discover” follows immediately: with a pensive, nostalgic tone and a forward-looking sense of form, Jacobson’s solo toggles between tender memory and rising resolution, akin to Freddie Hubbard’s gift for colorful storytelling. But not derivatively; he’s expanding post-bop’s wheelhouse of modernity.

One thing we don’t know about “Old Folks”

Did he fight for the blue or the gray?

But he’s so democratic and so diplomatic

We always let him have his way

In the evenings after supper

What stories he tells

How he held his speech at Gettysburg for Lincoln that day

This review was originally published in The Shepherd Express, here: