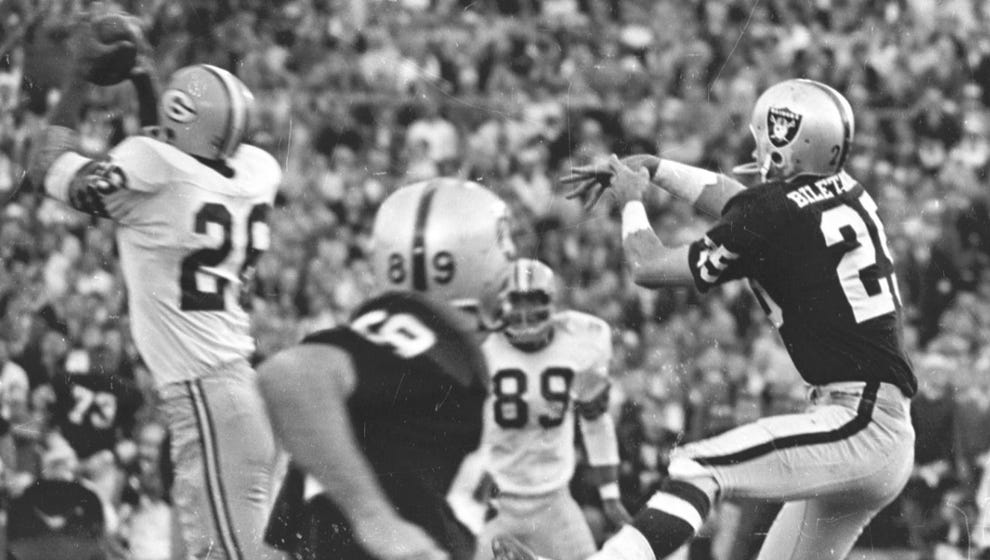 Herb Adderley (26, above and below) intercepts a Raiders pass intended for Fred Biletnikoff (25) during Super Bowl II. He returned the 4th-quarter pick 60 yards for a touchdown, all but assuring the Packers 33-14 Super Bowl win.

I sit here in my Herb Adderley Hall of Fame T-shirt after learning the news yesterday. 2

I will only briefly try to do justice to him or my feelings, right now. I will say my heart now feels like a Roman Gabriel bullet pass hit me in the chest.

Herb, of course, would’ve picked off that pass with his hands away from his body, and ran with it — an amazing, gazelle-like athlete. And yet, at 6 feet and 206 pounds, this Packer was a tough, deadly tackler and a tenacious jump-ball “rebounder.” 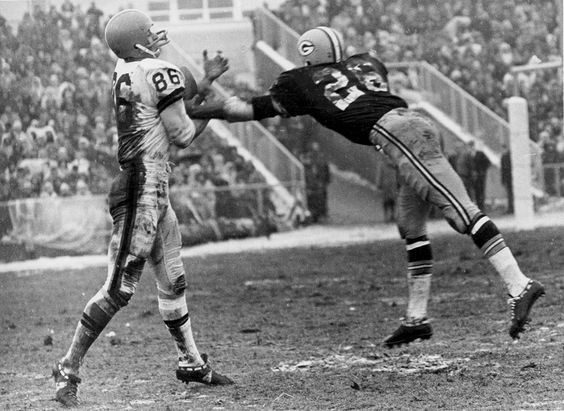 Herb Adderley breaks up a pass intended for Gary Collins of the Cleveland Browns. Courtesy packers.com

Vince Lombardi picked the Michigan State ball-hawk in 1962 as the first-ever African-American first-round pick. Some think Adderley was the best shut-down cornerback of all-time, comparing favorably to Deion Sanders, who was a very weak tackler. Like Sanders, Adderley was a brilliant kick-returner, being a former running back at Michigan State, who ran a 9.6 100-yard dash.

After Lombardi left Green Bay, Adderley was traded to the Dallas Cowboys. He became a vital cog in its “Doomsday Defense,” assisting the Cowboys to a Super Bowl appearance in V and a win in VI. When race-related challenges arose, Adderley rose as well, as a courageous locker-room leader for the Cowboys.

Along with the Patriots’ Tom Brady, and two Packer teammates, offensive linemen Fuzzy Thurston (Colts) and Forrest Gregg (Cowboys), Adderley is one of only four players in pro football history to play on six world championship teams.

In his 12 seasons, Adderley nabbed 48 interceptions, which he returned for 1,046 yards and seven touchdowns, an average of 21.8 yards per return. He also recovered 14 fumbles (returning them for 65 yards) and returned 120 kickoffs for 3,080 yards and two scores.

However, my fuller thoughts and assessment of him as a player and a leader are in my review of his great book Lombardi’s Left Side, co-authored with teammate Dave Robinson.

So I’m sharing Pete Dougherty’s Milwaukee Journal-Sentinel obit on Herb, and my review of his book, which is urgently important in these times of heightened racial justice concerns.

Herb Adderley (left) holds his Pro Football Hall of Fame bust alongside fellow inductee Jim Otto. They played against each other in Super Bowl II (see below) Courtesy Detroit News.

Raiders center Jim Otto hiked the ball when Adderley made the Super Bowl II pick-six (below). Otto is in the foreground (00) as Adderley heads for the end zone. Daryl Lamonica (3) was the quarterback Adderley intercepted. NFL Past Players

Here’s a quote for those who wondered about Adderley’s post-Packer career, as to where his heart lay:

“I’m the only man with a Dallas Cowboys Super Bowl ring who doesn’t wear it. I’m a Green Bay Packer.” – Herb Adderley

Here’s my blog article on Herb Adderley and his superb book Lombardi’s Left Side: https://kevernacular.com/?p=3185

As an added bonus, this obit piece from The Athletic includes a brief video appreciation of Adderley:

The Athletic on Adderley

1 His death was confirmed on Twitter on Friday by cousin Nasir Adderley, a safety for the Los Angeles Chargers. No details were given. He called Herb a “unique soul who has had such an incredible influence on my life.”

2 Technical difficulties prevented me from publishing this post yesterday.