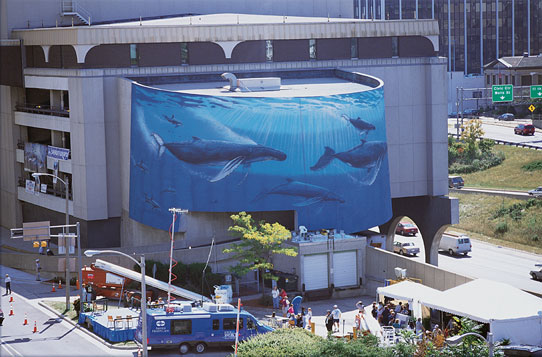 The Milwaukee “Whaling Wall,” destroyed in May, 2006.  Courtesy the wylandfoundation.com

Look up. That swatch of black hair streaking across the sky. Or is it a great raven twirling through the air currents? Now it slows, hovers. It’s all that’s visible. All that’s visible of him.

Because, poet Jeff Poniewaz now floats over the freeway of our city and our life. He’s up there, with the departed whales of Milwaukee’s freeway. Why? Poniewaz means “because” in Polish. 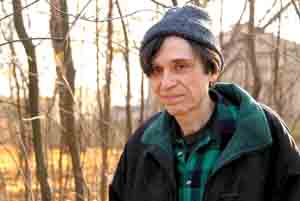 Here’s also why. For what he wrote about those whales. That uncanny feeling of seeing Jeff arose yesterday from the title and meaning of his excellent 2007 chapbook Whales Hover(ed). The title poem is “Whales Hovered Over the Freeway.”  And it arose from the river of warm, rich memory of recent Milwaukee poet laureate Poniewaz that flowed through the overflow crowd at Feerick’s Funeral home Saturday. His 50-year partner Antler, another recent Milwaukee poet laureate, recalled his lost soul mate in glowing words, along with many other friends and admirers.

Since Jeff died on December 13, I had been searching for his slim chapbook which I had put on the book shelf facing my computer keyboard, amid a bunch of thick tomes, on Melville, music, writing and culture. Somehow it had eluded me.

But yesterday after the memorial, I cast my eyes again across the row of books and something led me to the ocean-blue book’s unmarked sliver of a spine, nestled between a stout hardcover of Melville’s novel Redburn and poet Mary Oliver’s American Primitive collection.

It felt like me spotting a black flash of Jeff’s hair, soaring in the sky, from the corner of my eye. So I retrieved one of the strongest statements this eco-poet ever made about the natural word and art, about human over-development and misplaced priorities.

The poems deal with what was Milwaukee’s portion of The Whaling Walls, a vast array of stunning life-size murals of whales by artist Robert Wyland. His whale murals enchant and lend meaning to over 100 other cities worldwide, a remarkably ambitious and laudable cultural project which, unlike much public art, rarely causes controversy, for the beauty and accessibility of the art.

Here, Wyland’s mural had adorned the County Courthouse complex over the I-43 expressway entering the Marquette interchange. The city destroyed the mural, titled “Whale Commuters,” during Courthouse reconstruction on May 23, 2006.  The mural lasted less than a decade. An extenuating circumstance was that once a freeway driver apparently looked at it a moment too long and a fatal multi-car pile-up ensued.

So the city simply destroyed it, instead of relocating the mural to a less distracting location. 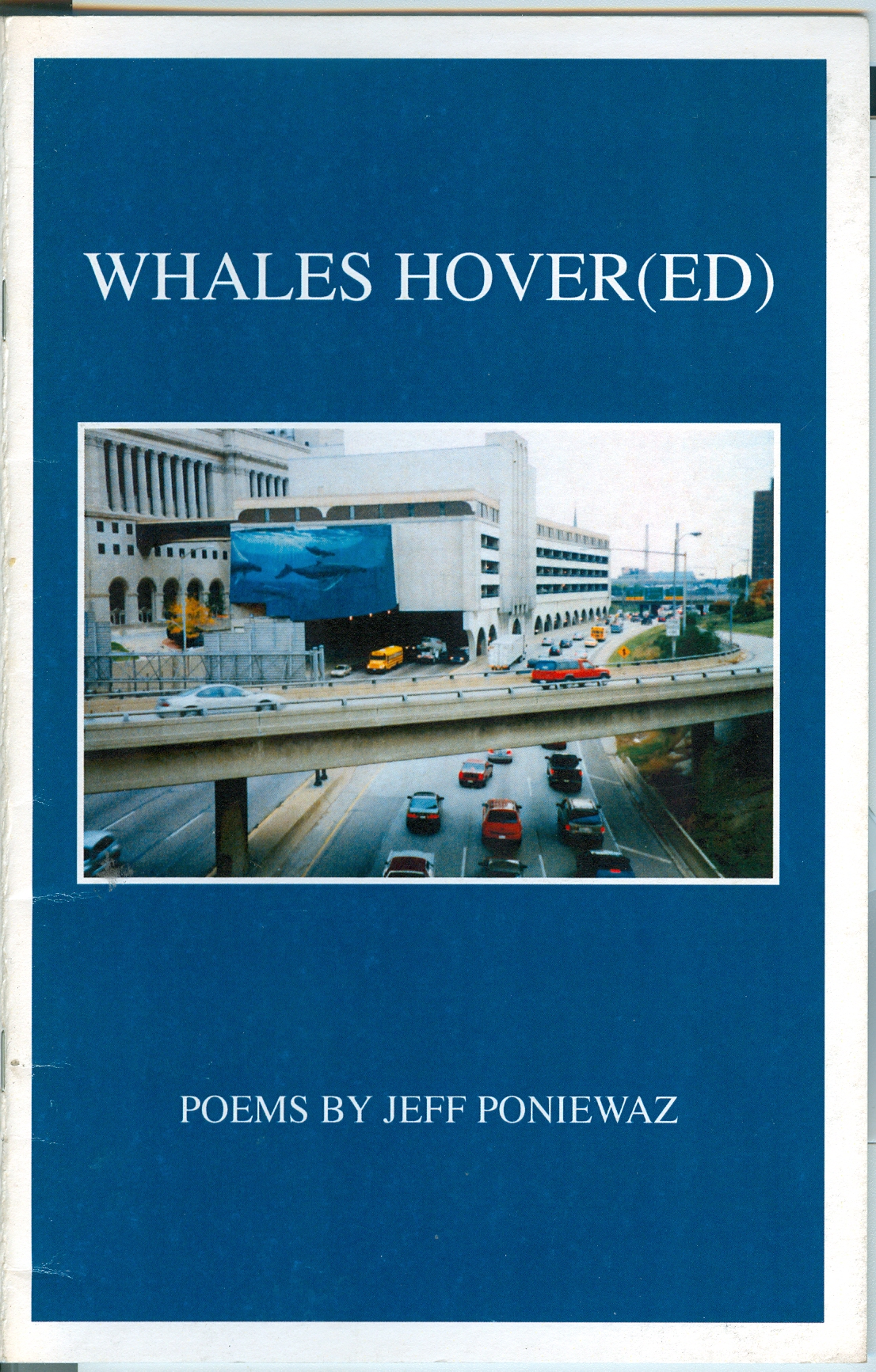 There are 79 cities worldwide which have commissioned Wyland’s Whaling Walls. But Milwaukee couldn’t handle the truth of this wondrous art. The city screwed up royally.

The story gets worse. Wyland later offered to paint a whale wall on the Wells Street side of the Milwaukee Public Museum, the building he had originally wanted to do. However, as was the original problem, the museum has refused the offer due to the lack of any connection between Milwaukee and the ocean and therefore whales as well.

Yet seagulls had live nests with eggs destroyed in the mural site demolition.

Dynamic nature often reaches far beyond strict geographic boundaries in showing a given communty’s connectness to the life forces around the globe. Melville wrote the greatest ocean story of all, Moby-Dick, on a land-locked farm in western Massachusetts. We know how the Great Lakes flow to and fro from — and wouldn’t exist without — the ocean. The name of Jeff’s enlightened publisher was Inland Ocean Books. The museum’s refusal was small-mindedness at its worst for a cultural institution. 3

Yes, such a move would’ve been more effort and cost than simply demolishing the whale mural. But since then, millions of tax dollars and countless hours of labor have poured into ongoing freeway development and expansion — much of it questionable — and destroying natural habitats around Milwaukee County. My friend Ann Peterson not long ago saw a solitary Great Blue Heron searching around above the ugly far west side freeway construction site for the natural habitat he had previously returned to as part of its natural habitat. 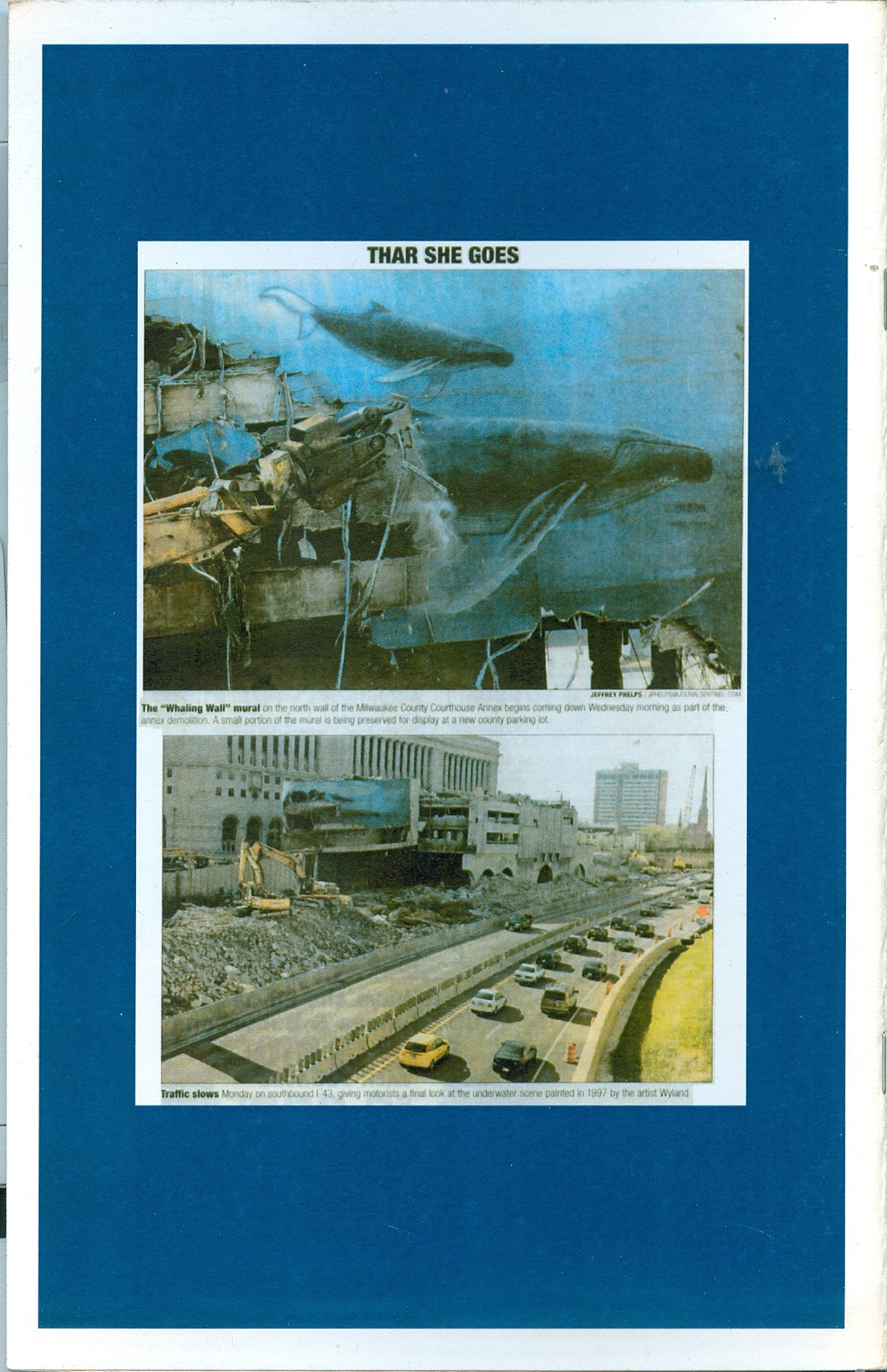 Front and back covers of Jeff Poniewaz’s chapbook. Images and reproduced poem below copyright 2007 by Jeff Poniewaz and Inland Ocean Books.

The mural destruction, and its significance to our city, should not be dismissed as water over the bridge, or expressway. Atonement and wiser choices still await past mistakes and transgressions, especially when nature-ravaging development continues heedlessly.

Jeff’s now-airborne spirit won’t die or stop fighting for a more harmonious relationship between humanity and our environment.
Here is Jeff’s title poem from his collection, along with the chapbook’s cover photographs which illustrate the whale mural’s fate. He chose the Melville quote at the end to conclude the poem.
Spread your wings sweet Jeff and soar, yet always circle back to us. We need you still.

As our mutual friend Richard Gallas declared at yesterday’s memorial, no poet he knew was more fierce than Jeff. Gentle, loving, and righteously fierce. 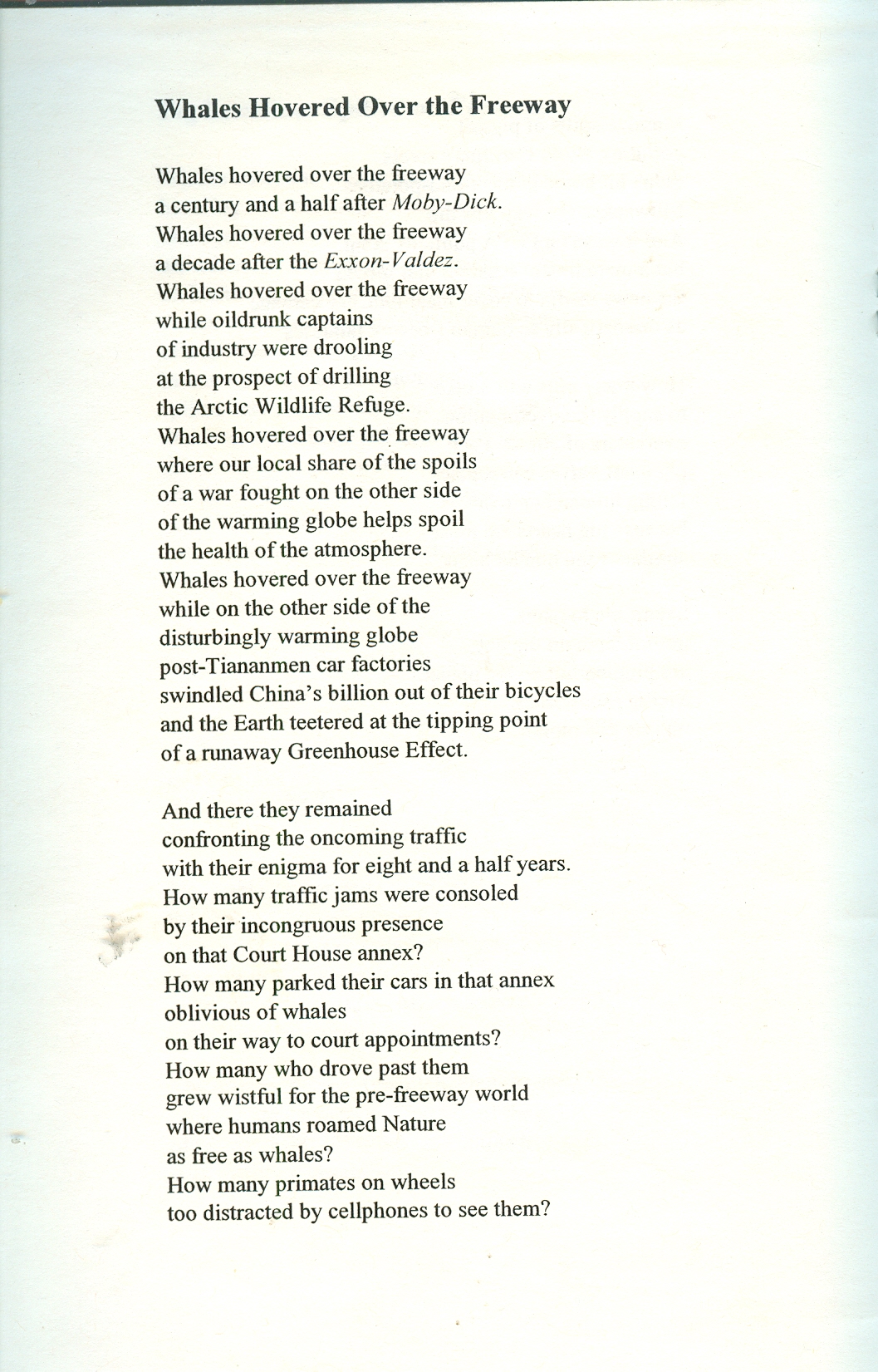 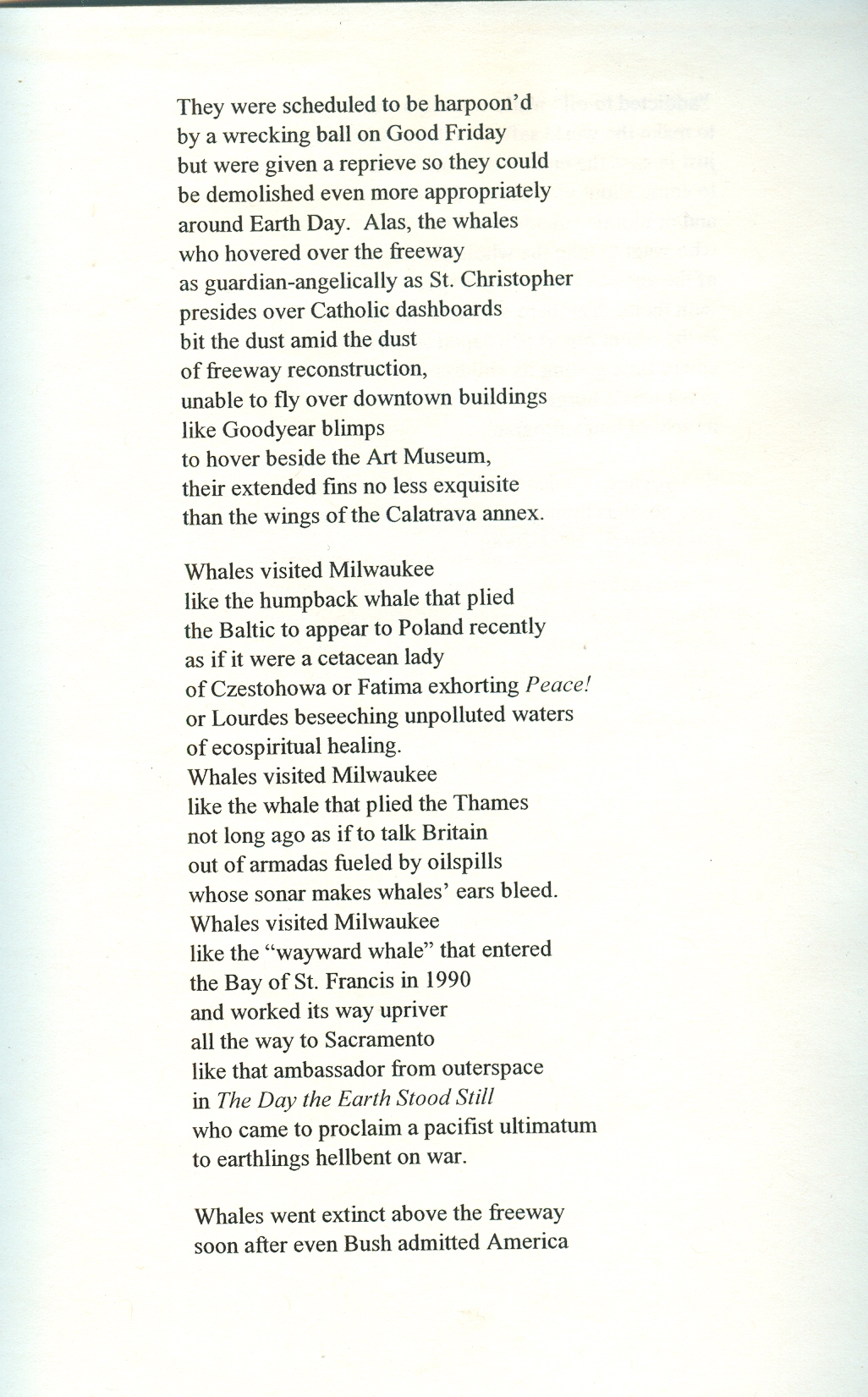 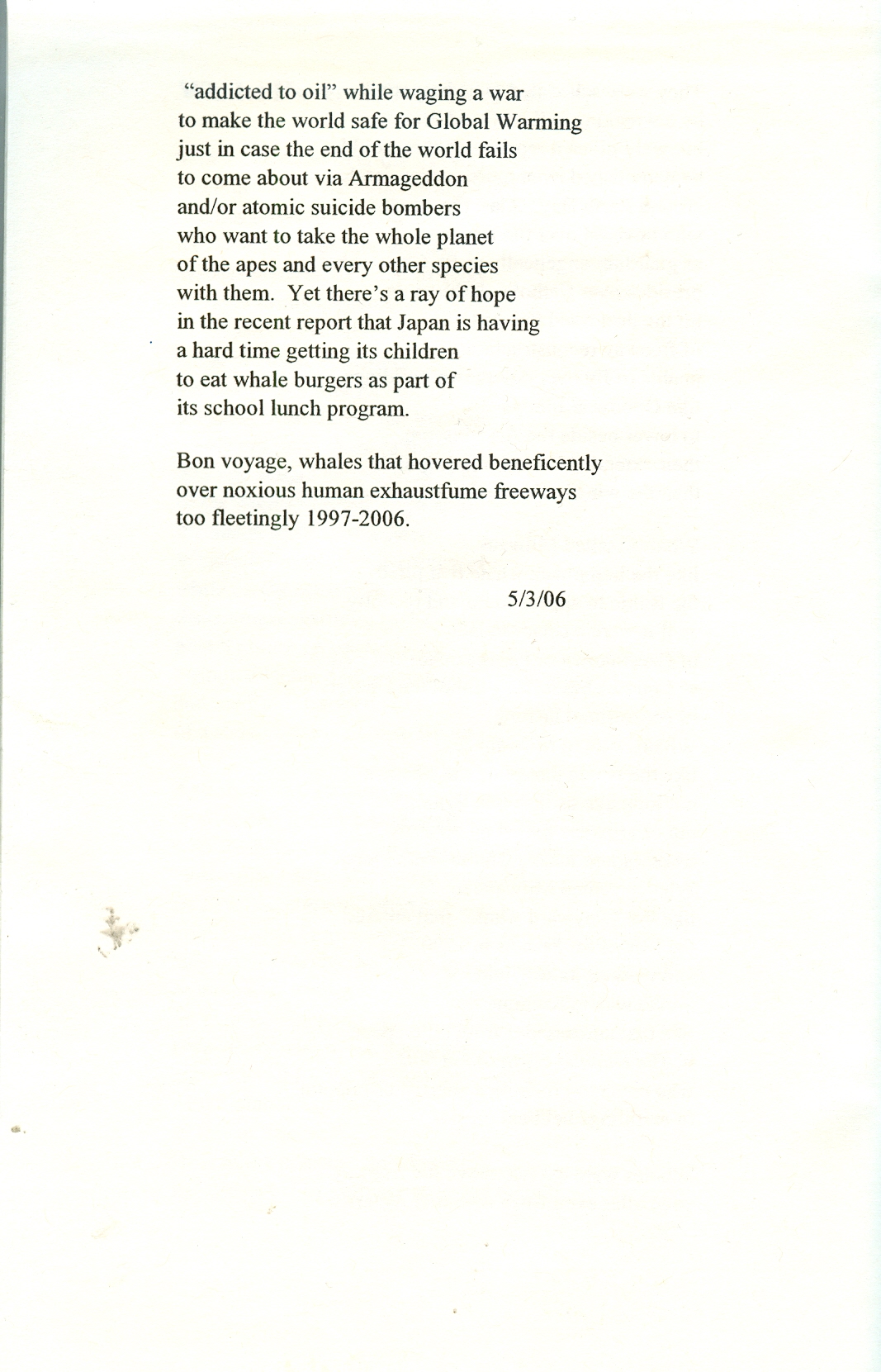 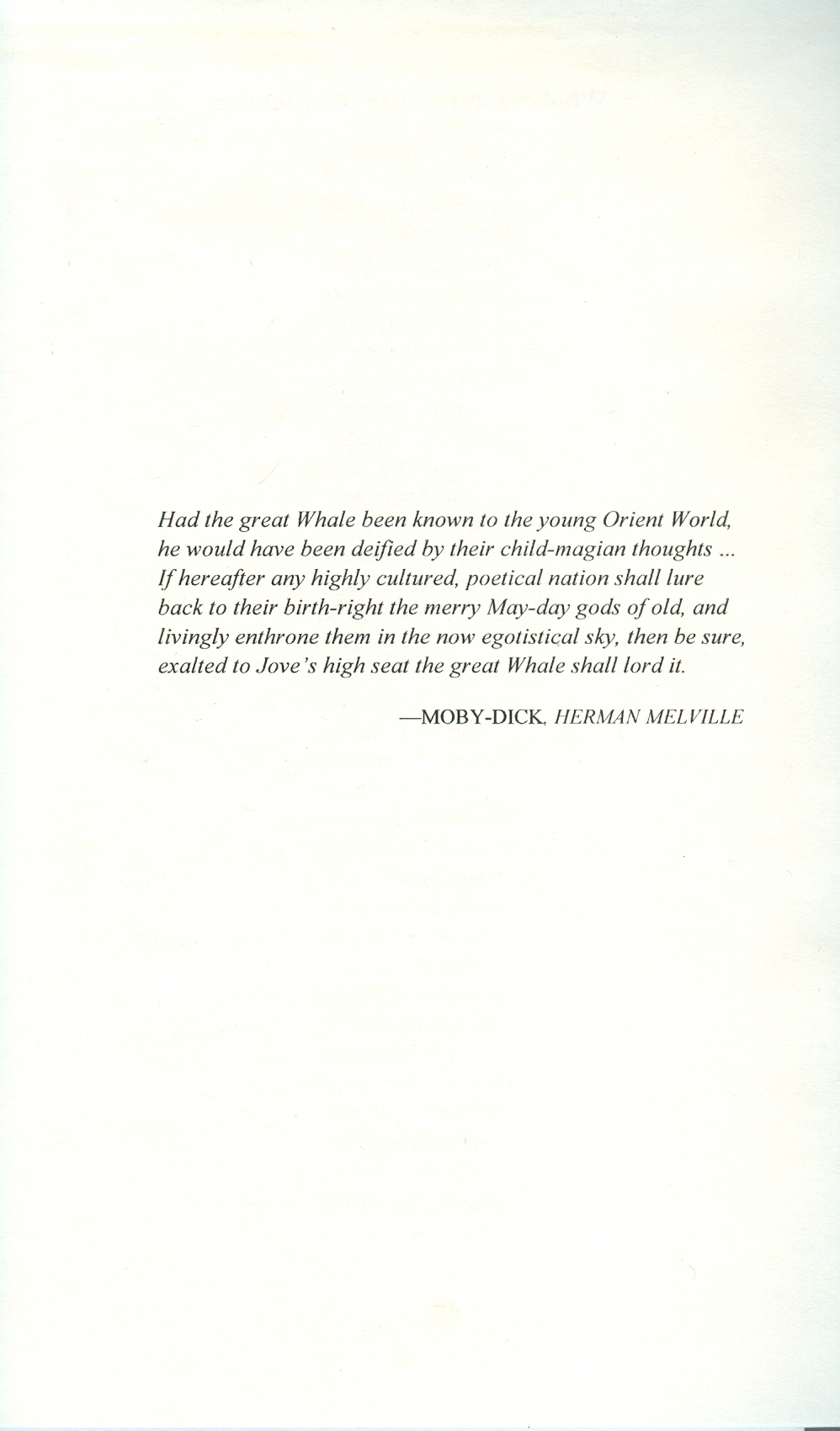 “We know now that water connects all the countries of the world,” Wyland says. “Our goal with these projects over the last three decades has been to convey the urgency of conservation issues to the public. The health of our ocean and waterways are in jeopardy, not to mention the thousands of marine animals and plants that face extinction if we do nothing.”

The completed “Wyland Walls” campaign is one of the largest art-in-public-places projects in history, spanning five continents, 17 countries, and 79 cities around the globe 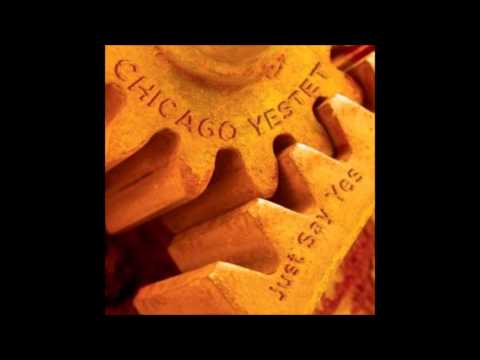 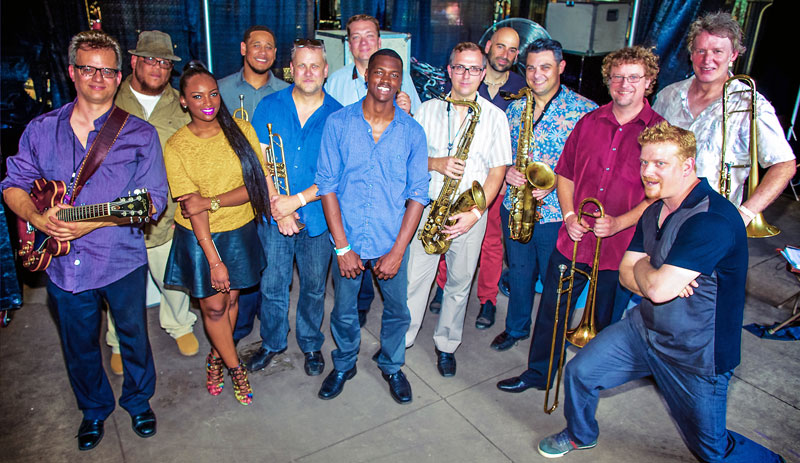