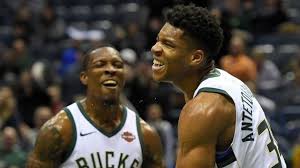 Could the winning chemistry between Bucks Eric Bledsoe and Giannis Antetokounmpo & company have something to do with their kinship with another agile quintet (below), a classic jazz combo? Sure looks like they’re digging the groove, and maybe playing on a parallel plane. Bucks photo by Tom Lynn/AP 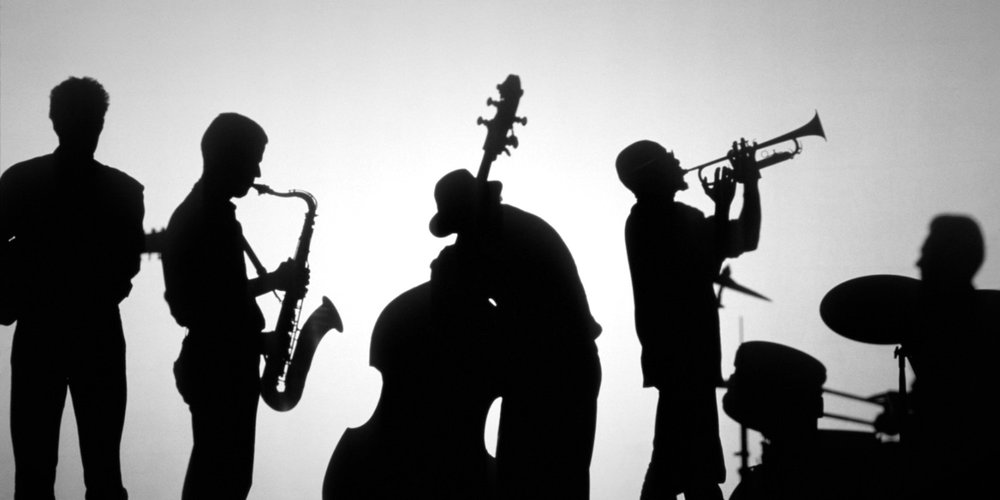 (Editor’s note: Culture Currents is finally back in the flow of things. This comes after several months of sitting on the sideline while enduring exasperating technical difficulties from computer updating and repeated fumbling of the ball on the two-yard-line by GoDaddy, the domain provider for www.kevernacular.com. So, enough, and onward with our exploration of our common and uncommon culture!)

But it seems like every healthy player has played better than they ever have, this year. Coincidence? Well, we might need to consider the old-fashioned yet timeless virtues of strong team coordination and chemistry, but perhaps from a fresh angle.

A smart and insightful Milwaukee music journalist and ardent Bucks fan, Joey Grihalva, has come up with a deeply probing analogy to help explain the quasi-mystical vagaries of basketball team chemistry.
His premise is that a great basketball team like the Bucks is surprisingly akin to a great jazz quintet. That great American vernacular music has, of course, long evolved into an art form of individual and group improvisation, rhythmic buoyancy and dynamic interplay. The jazz tune, or form, follows those functions, like a well-designed basketball play working to a T, or sometimes when gifted players just wing it, like birds truly of a feather.

In this nifty essay – originally published on the 88.9 Radio Milwaukee website – you might say Joey Grihalva’s trying to make hoops X’s and O’s swing. 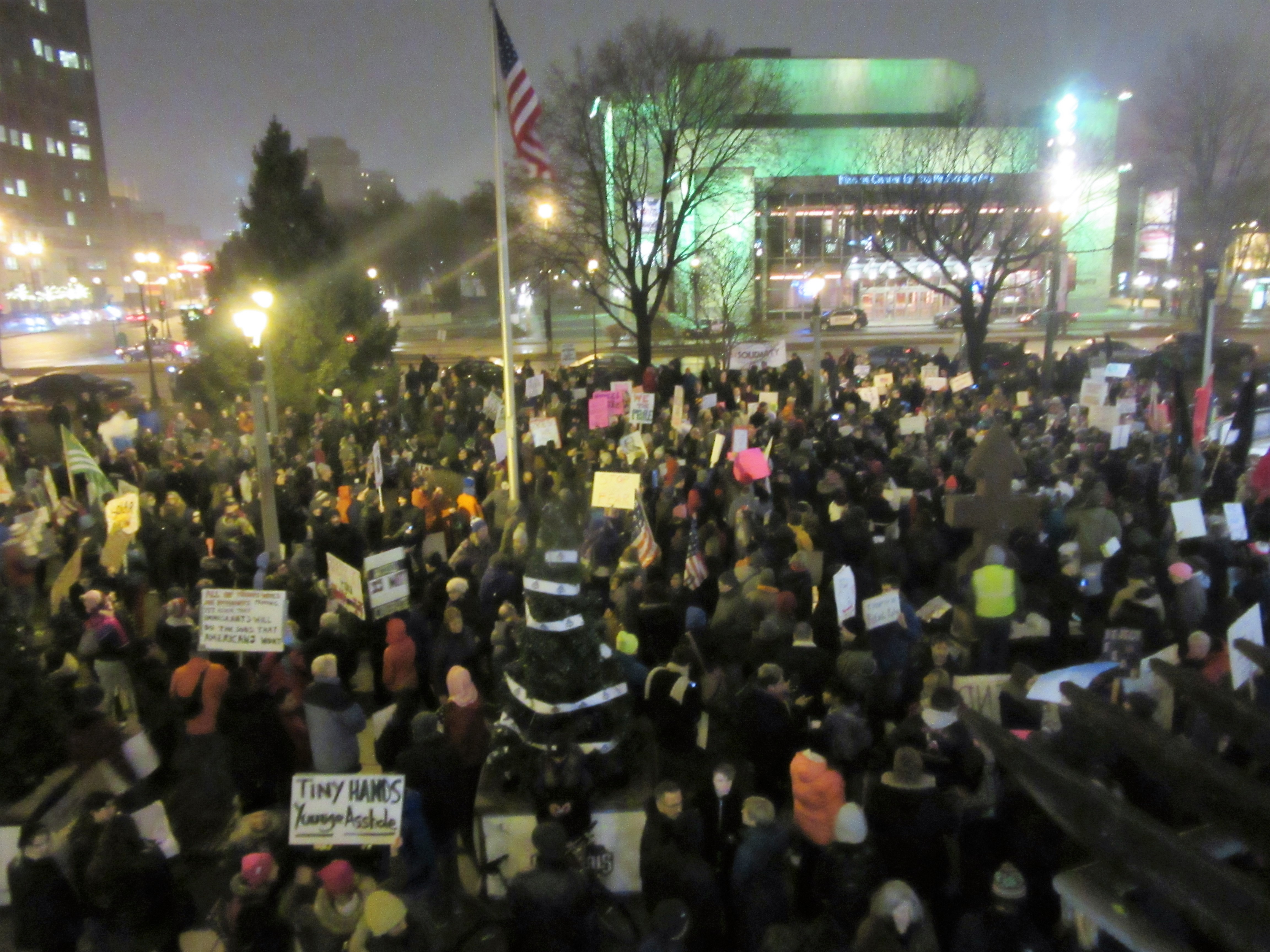 The crowd for the first gathering of the Milwaukee Coalition Against Trump crowded into Red Arrow Park on Friday, before beginning a protest march throughout downtown, on the night of Donald Trump’s inauguration. The Marcus Center for the Performing Arts is in the background. All photos by Kevin Lynch.

The national news today report, and document live, huge rallies and marches – 600 different marches – across the United States in response to the Trump inauguration, including the Washington women’s march, over 500,000 strong. This represents perhaps an unprecedented groundswell of grassroots political response. But my report below is a prelude to all that, a protest rally in Milwaukee last night, only hours after the inauguration.

MILWAUKEE – The looming fog and surly mist may have reflected the dark inner mood that brought thousands of people to Red Arrow Park in downtown Milwaukee Friday evening. They came from all directions, gathering to protest what they felt was the questionable legitimacy and ominous threat of Donald Trump, who had just been inaugurated as America’s 45th president hours before. Now, while Trump gallivanted around to various inauguration balls in Washington, the crowd milled about, some hopping back and forth to stay warm, their own little dance of defiance.

The event didn’t unfold seamlessly; the Milwaukee Coalition Against Trump at this point is perhaps a bit too ad hoc to have provided for electric amplification for leaders to speak to the throng. Instead they use hand-held megaphones and, standing about 15 yards away from their podium, I and others near to me could not hear what the speakers said, except for fleeting words.

So I climbed a staircase behind the podium and crowd and got a better vantage point and suddenly could hear better. One woman then announced that time had come to begin a march through downtown.

The massive coil of humanity began to unfurl and snake its way west onto State Street. As I followed, I passed a woman standing next to a park bench. She held a sign and told marchers: “Don’t forget Dontre Hamilton!”

Yes, of course, I thought to myself. This is Red Arrow Park, and that bench is probably the very one that Hamilton, a young black man slept on a few years back, until he was accosted by Milwaukee police who then shot and killed him –  after other officers had previously reported that Hamilton posed no threat to anyone. It was Milwaukee’s own dire story of police violence against unarmed black men, which has repeated itself time after time, seemingly week after week, across America in recent years. 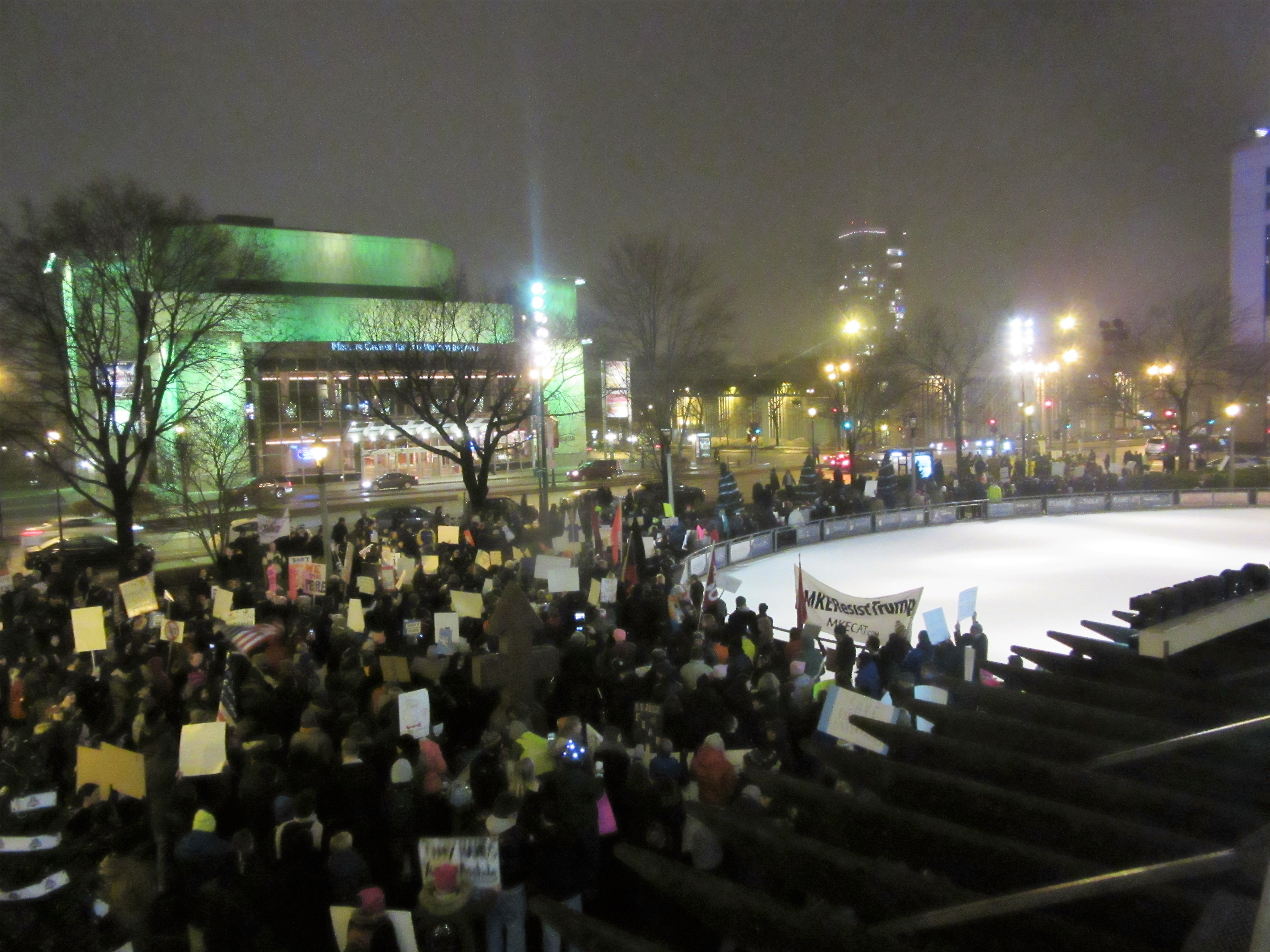 The crowd begins to begin a march by leaving beside the Red Arrow Park skating rink, and past the park bench where Dontre Hamilton was killed by Milwaukee police.

Donald Trump, however, had campaigned on “law and order,” and apparently more of the same, a stance strongly supported by David A. Clarke, the controversial cowboy hat-wearing black Milwaukee County Sheriff, who was the object of several chants this night, especially as the crowd reached the police station and County Sheriff’s office. 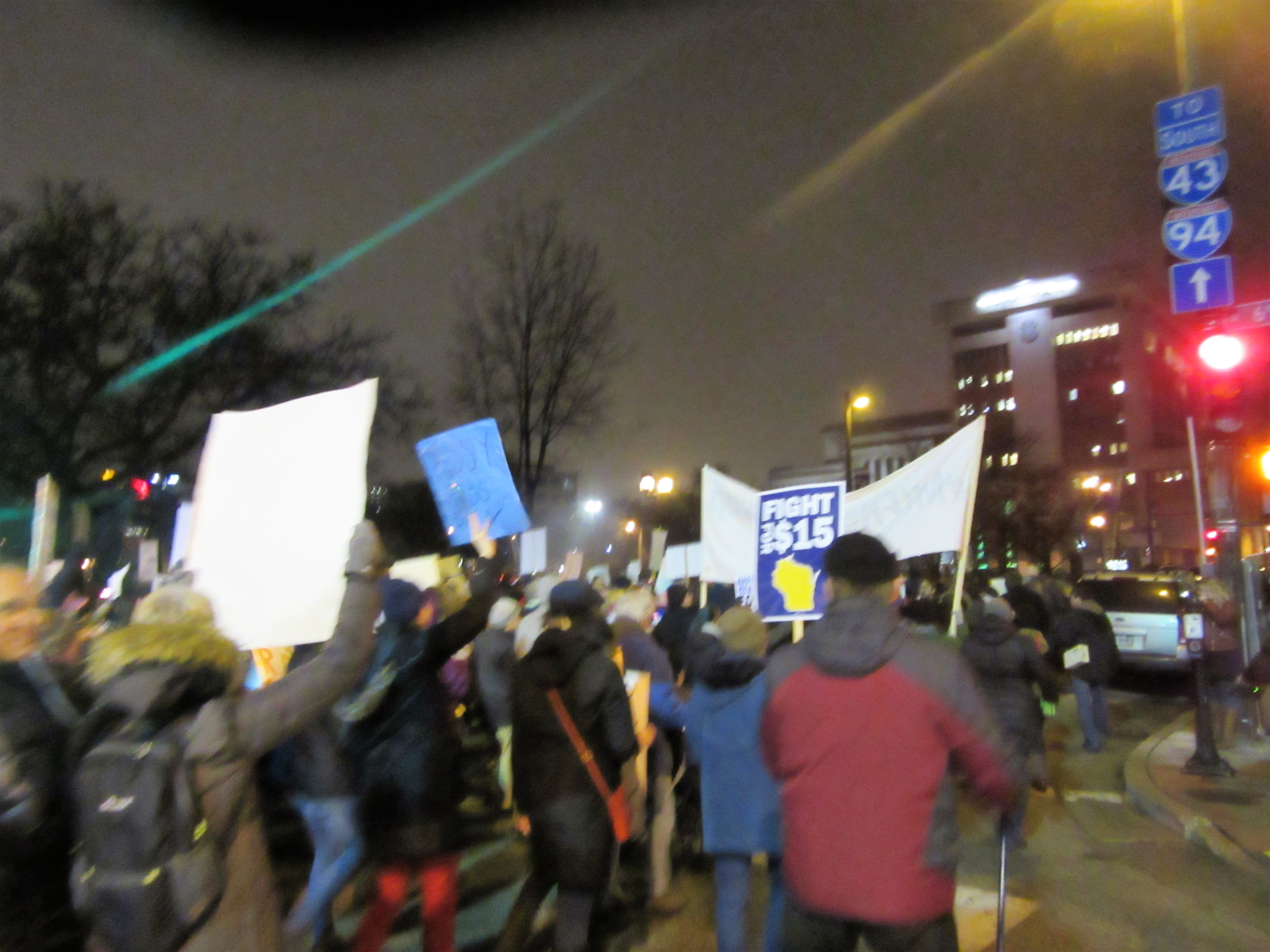 The marchers head west on State Street toward The Bradley Center and, in the background, the Milwaukee Courthouse.

The protest march moved across The Milwaukee River, past The Milwaukee Journal-Sentinel communications building, where I once worked. Spirits now rose as chants began and the walking marshalled energy, including a woman, her hat bedecked with pro-women buttons, pushing a young man in a wheel chair. In the next moment, the march ground to a halt, at the corner of Fourth and State Streets in front of the marquee of the Bradley Center advertising for an upcoming Bucks game.

Suddenly police became conspicuously evident especially gathered on Fourth and State. Television cameramen scrambled around, trying to get good angles to shoot from.

“Why did it stop?” one woman asked. “Is this as far as it’s going to go? They said we would go much further than this.”

“I don’t know, maybe the police stopped it,” I answered.

Some of the countless handmade signs spoke quite bluntly, including one message, held aloft by several young women, which read simply “PUSSY GRABS BACK,” a reference to an obscene comment that Donald Trump had made about his efforts to molest women, in a recording that gained notoriety during the presidential campaign. My own hand-made sign read “Chop Down Trump the Stump” and included a printout of a satirical drawing I did during the campaign, depicting Donald Trump as a tree stump, with a number of small banners stuck into it, bearing various racist, sexist and xenophobic comments he made during his improbable rise to the presidency, despite losing the popular vote to Hillary Clinton by 2.8 million votes.

Still, the march remained stalled. Police stood by in ready, their dark uniforms silhouetted in the night.

“I’m getting scared,” a middle-aged woman said to me. I said nothing but patted her on the back reassuringly.  An electronic sign flickered above with the image of Milwaukee Bucks giant All-Star Giannis Antetokounmpo, a sort of real-life god whom, in this uncertain moment, anyone might claim for their cause.

The minutes passed in increasingly agonizing slowness, as the trailing end of the marchers now began massing more tightly in the intersection.

And then for no apparent reason, the marches began moving forward. I wondered if the coalition’s strategy was to stop to make a statement at this conspicuous spot, where the largest crowds gather in downtown, although for sporting events. 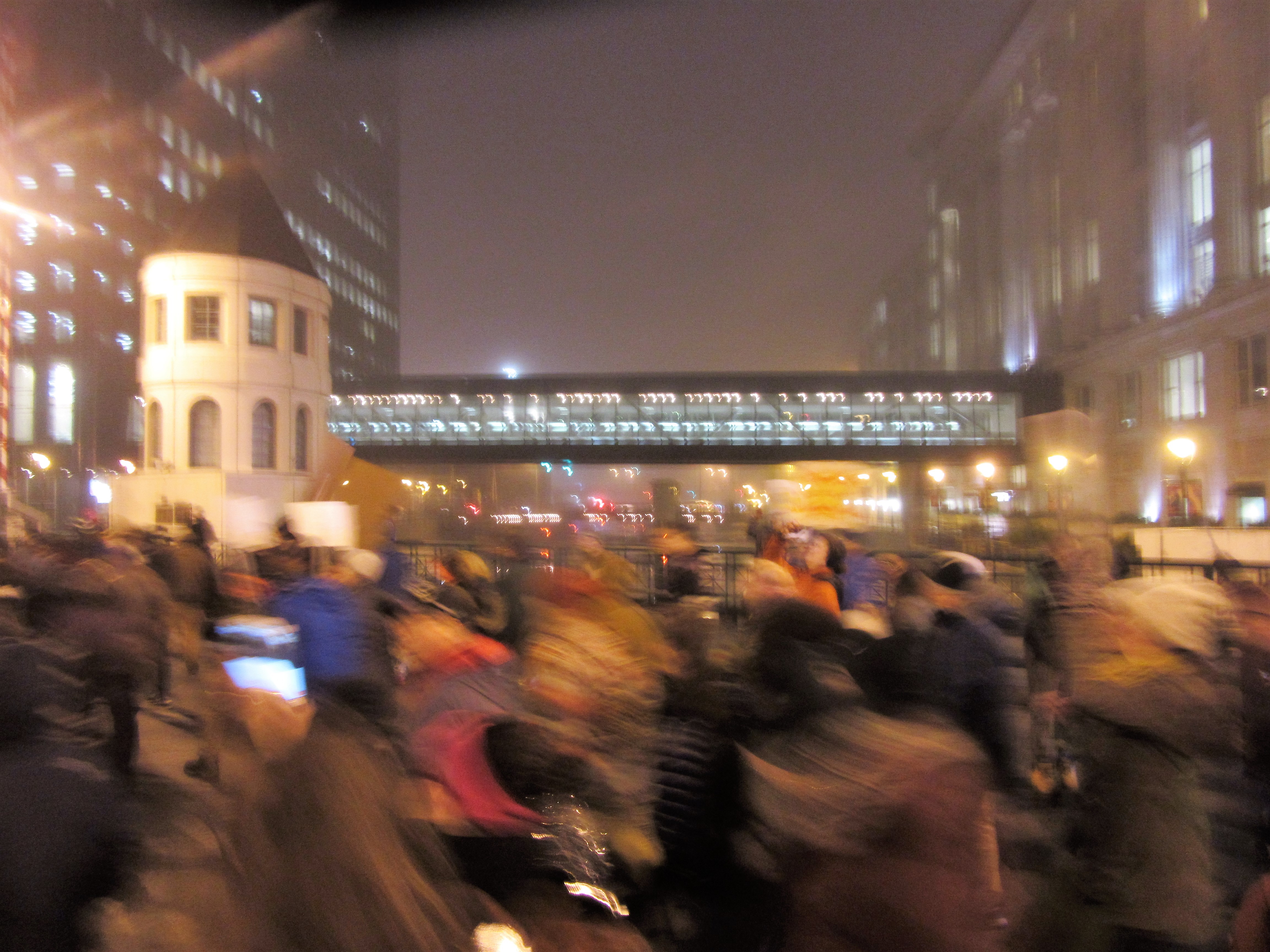 The crowd continued up State Street until we made a left turn and headed toward the brilliantly lit tunnel that penetrates the Milwaukee County Courthouse building. 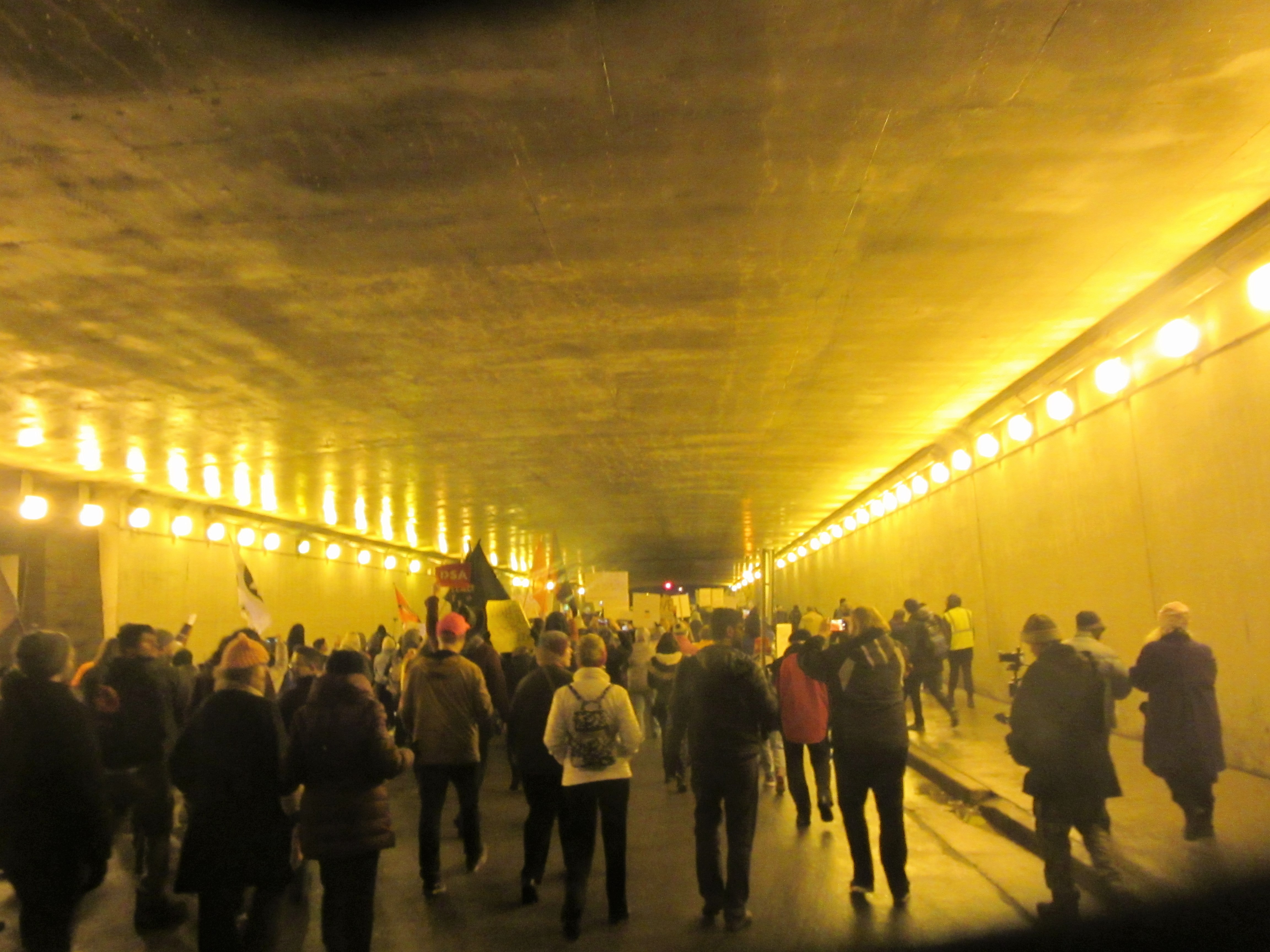 The marchers enter the Courthouse tunnel and raise a thunderous din.

And here something extraordinary happened. The crowd instinctively realized the acoustic resonance of the long tunnel and a huge roar began swelling as they entered and occupied the extended space. The sound magnified into a boisterously massive white noise of human passion, and probably some defiantly anarchic energy. The tunnel normally expedites swift-moving cars, and right there I felt thankful that the protest organizers had apparently received the proper permits to march through most of the major downtown streets that cars normally prowl. 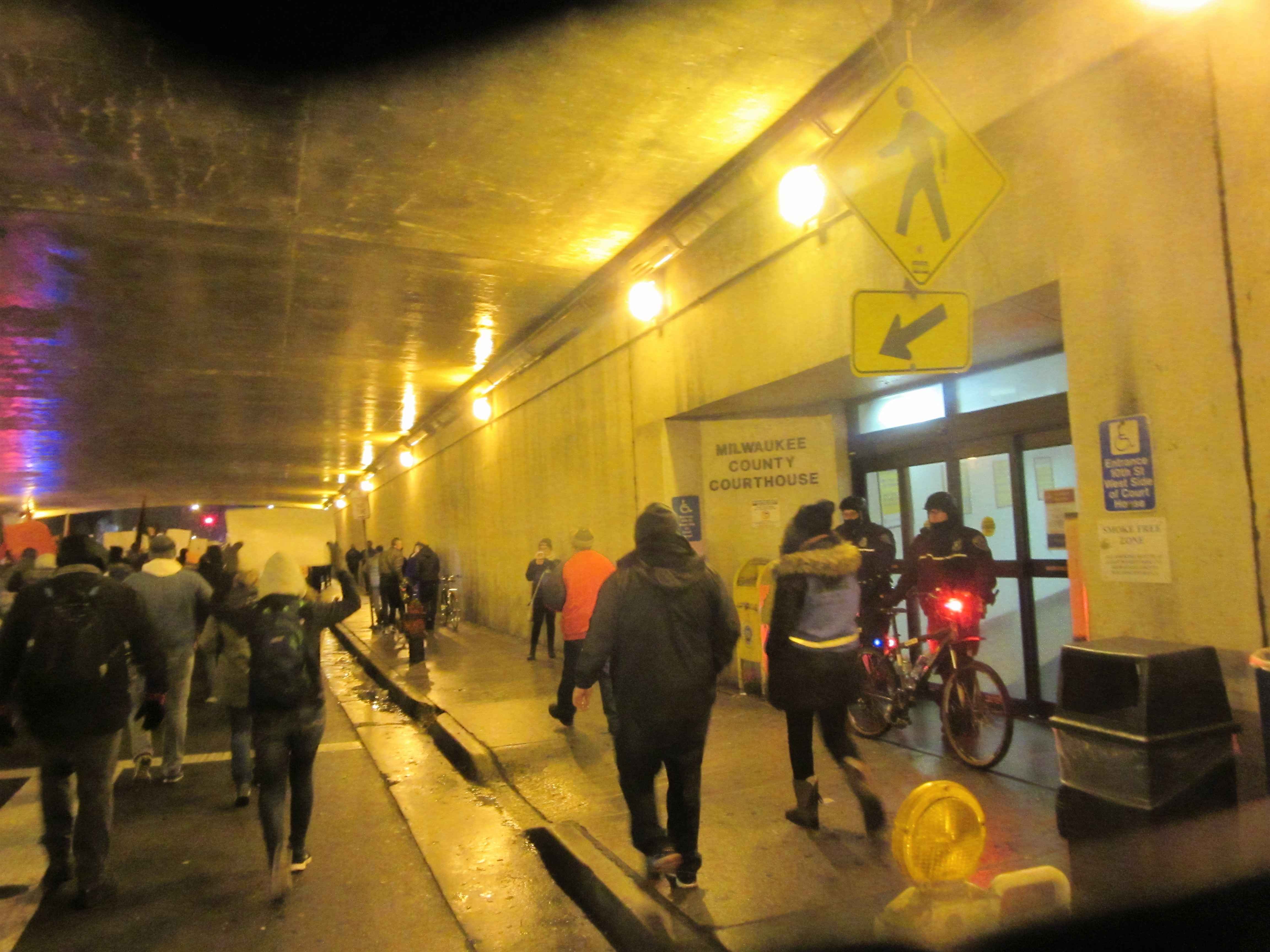 That became all the more striking when the march approached, from 3rd Street, the entrance to the Grand Avenue Mall and then turned left onto Wisconsin Avenue. Though a Milwaukee native, I had lived in Madison for nearly 20 years, until returning to my hometown in 2009. I had participated in some Madison protest marches. Now, it suddenly struck me: I was walking down the middle of Wisconsin Avenue, the main street of Milwaukee at 7 p.m. on a Friday night, protected by the river of humanity. 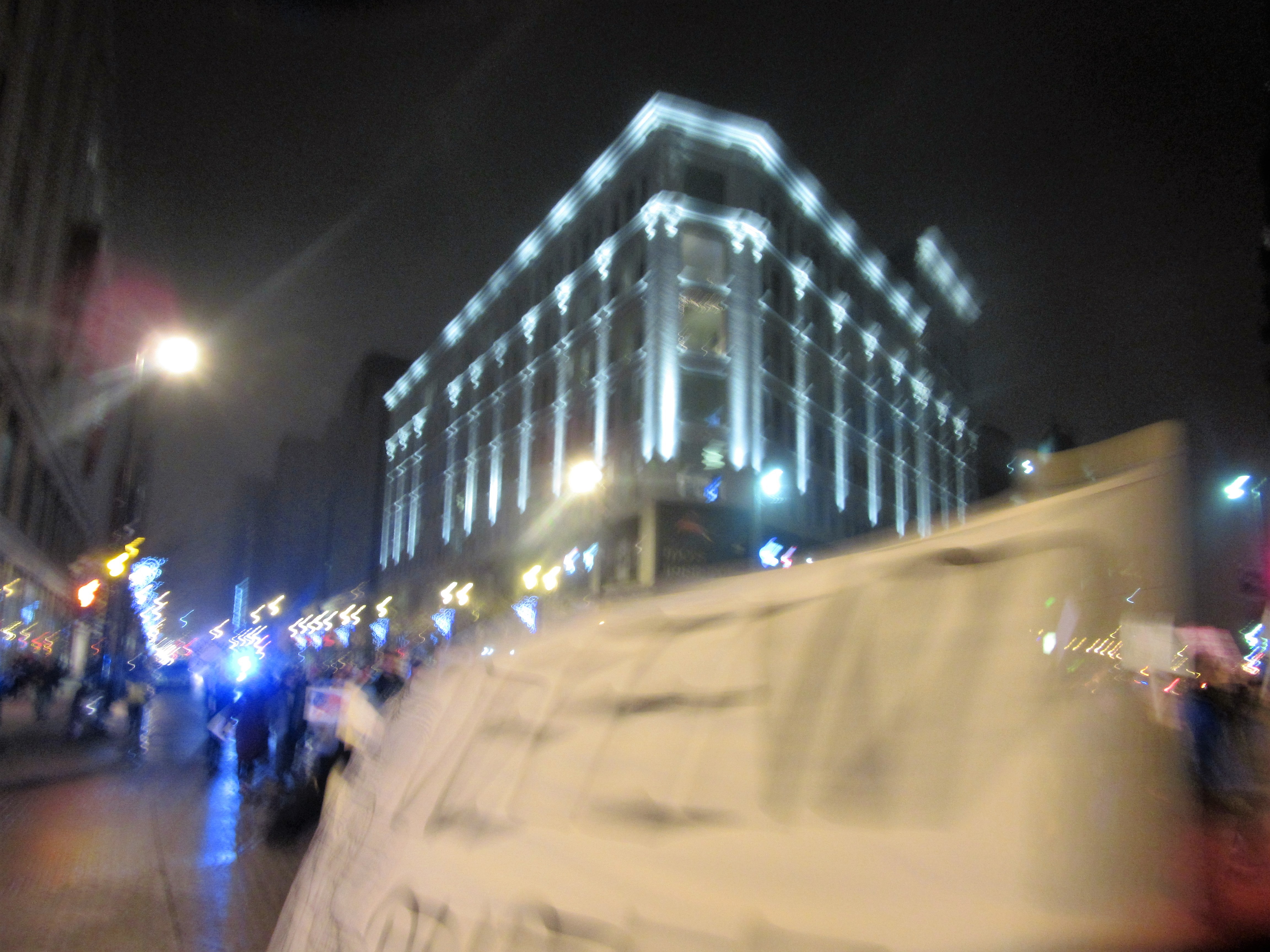 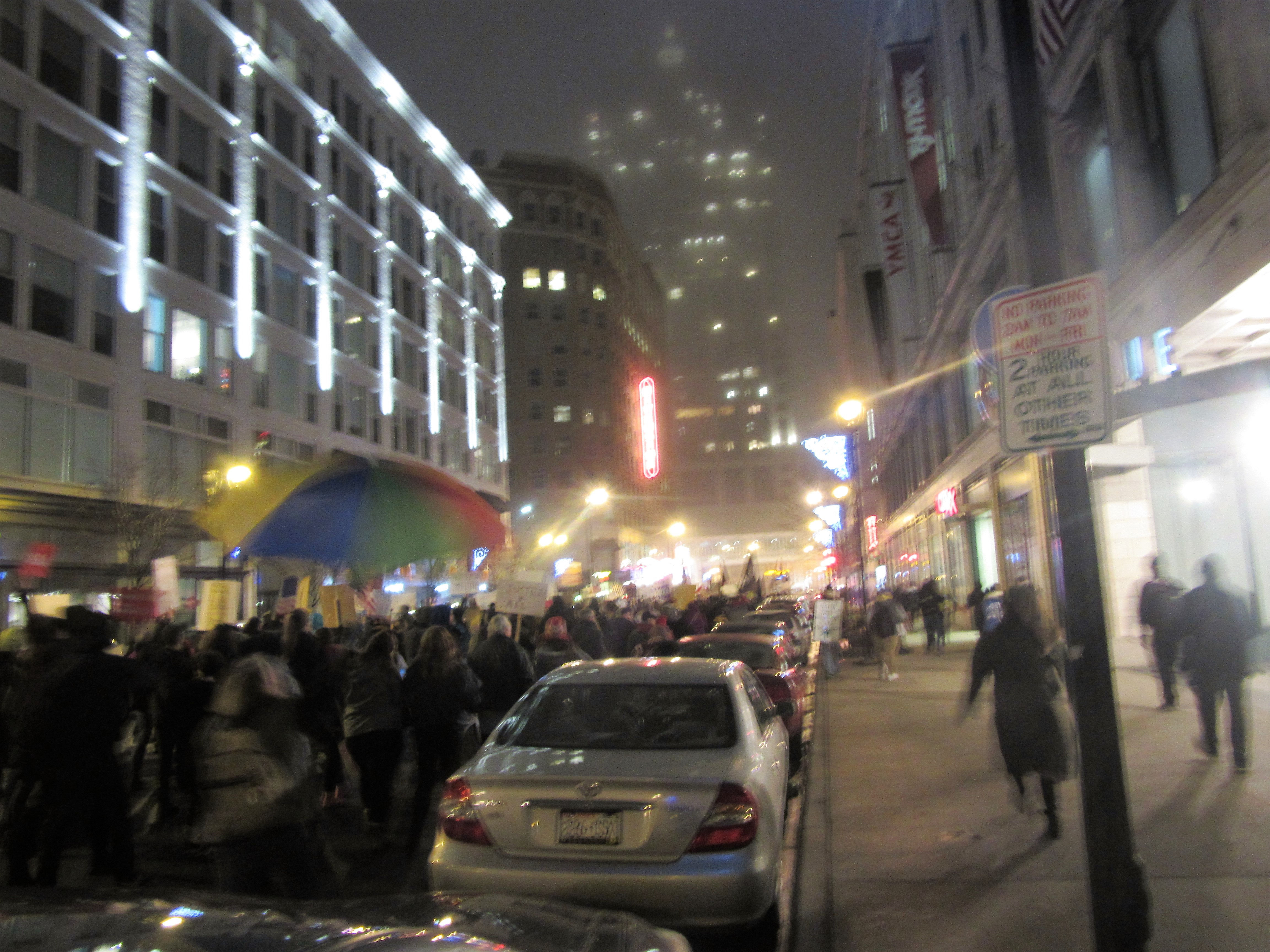 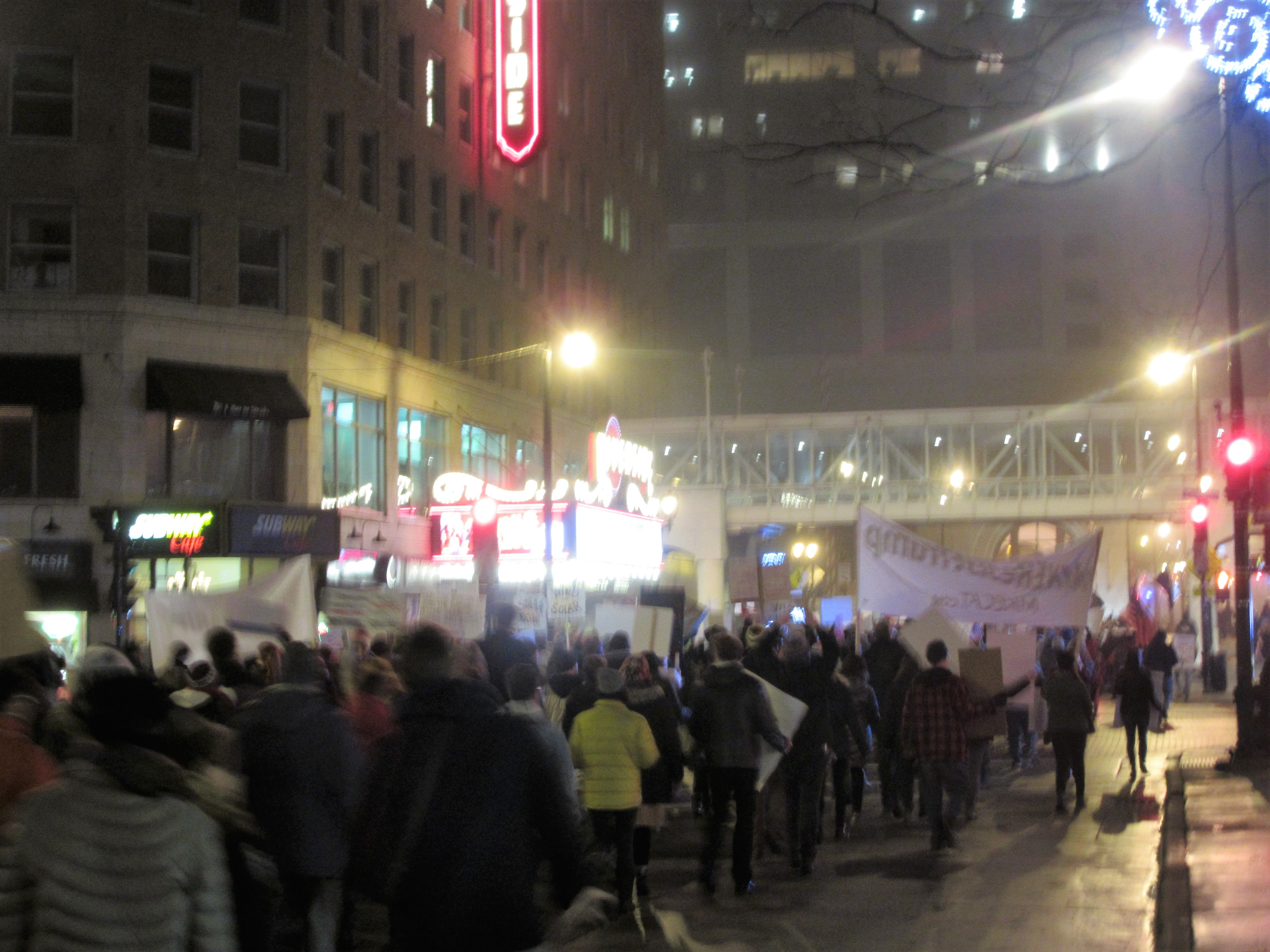 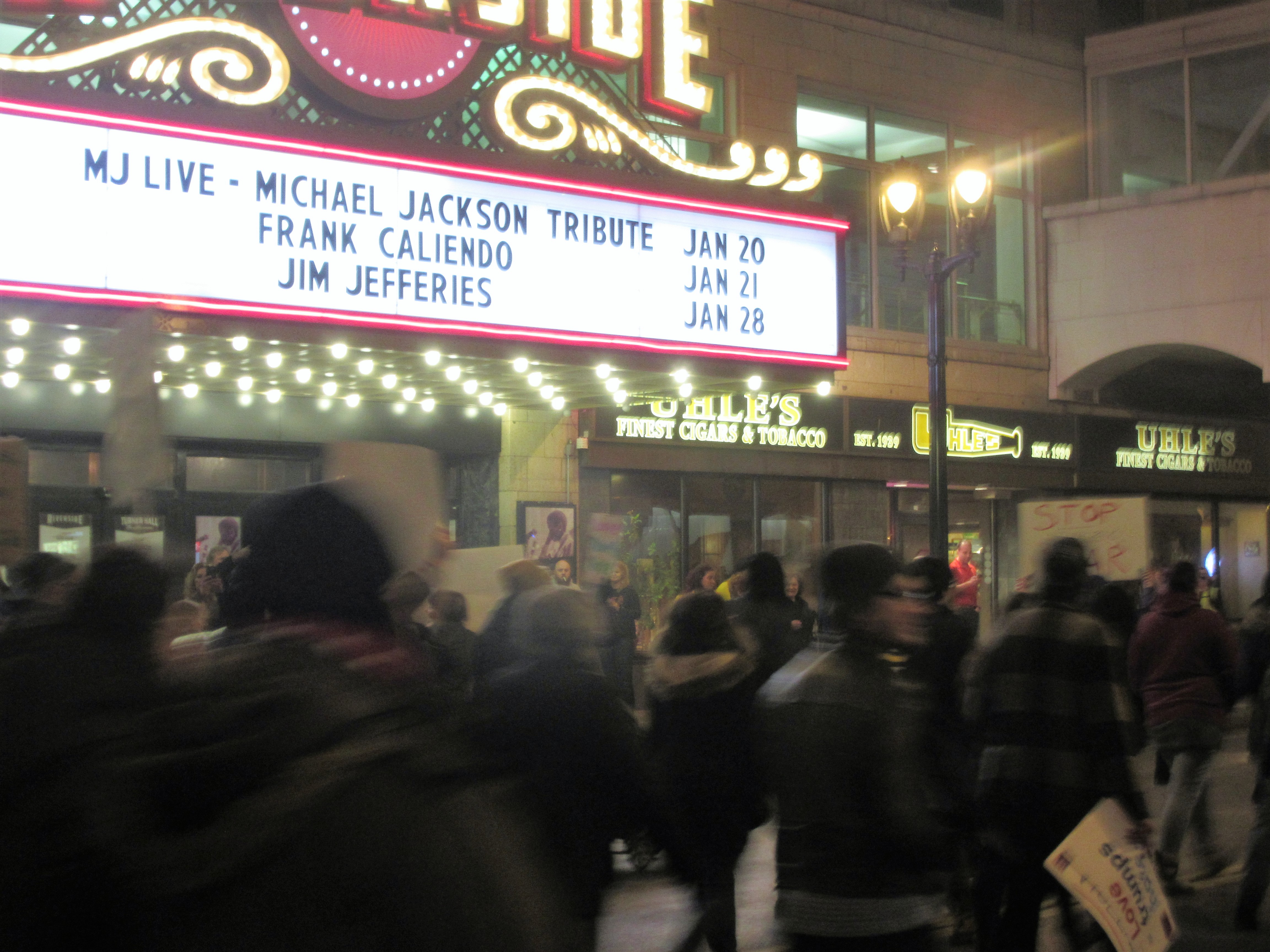 It struck me how our own cultural and political performance now intersected with the downtown’s other primary venue of entertainment performance, besides the Bradley Center. It felt like we were playing out a statement about what seemed important and vibrant and culturally alive, right now. One young woman began singing out the great Civil Rights-era anthem “We Shall Overcome,” and others nearby, including myself joined in. Right here, in this moment, the song’s resolute, hopeful lyrics, and stately, chest-heaving melody moved me, and I knew I was not alone.

Again we crossed over the Milwaukee River and eventually wended our way back to Red Arrow Park, situated across from another of the downtown’s largest entertainment venues, The Marcus Center for the Performing Arts.

Yes, ours was a performance, a drama of dissent, but it was virtually spontaneous, aside from its provisional organizing.

“What does democracy look like?” one of the organizers had shouted through a megaphone several times during the march.

“This is what democracy looks like!” The crowd responded. Yes, it’s a familiar refrain at American protest marches. It signifies the people getting their moment to sing out, to let their cultural utterance seek out the truth, even as the dawn of a new presidency feels as dark and gloomy as this night, which seemed akin to the Trump’s strikingly ominous inauguration speech.

James Fallows, the National Book Award-winning author and national correspondent for The Atlantic, has read all 45 presidential inauguration speeches. Fallows noted last night that Trump’s was the first such speech to not display humility in honor of the office, nor an effort to open his arms to all of America, to try to bring us together, despite our differences.

But the light of energy this crowd radiated for several hours is the kind of force that could turn that dark dawn, slowly but surely, into something powerful, positive and righteous for the great mass of the American people and their democracy, which tonight looked like this, in cities all across America.