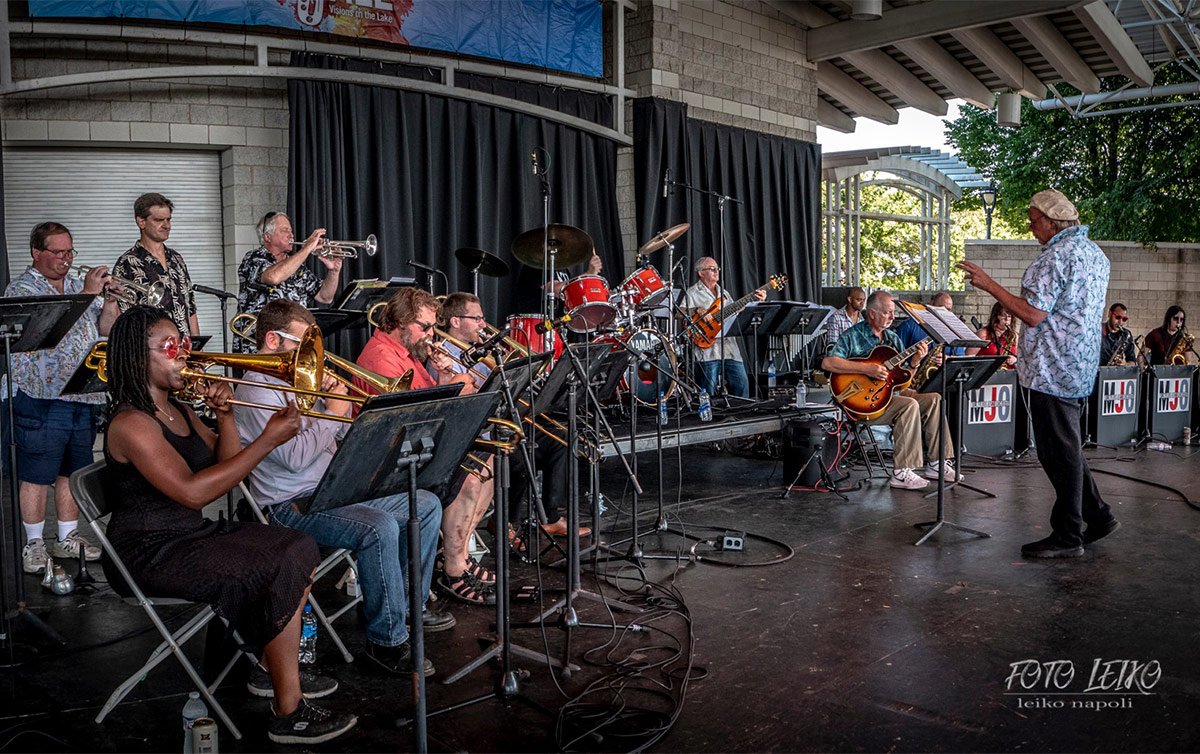 The Milwaukee Jazz Orchestra concert, scheduled for Saturday, Aug. 21 at the Racine Theater Guild, will be postponed to a later date because of poor advanced sales and lack of sponsors.
The MJO has a jazz educational festival at Racine’s Prairie School — whose music program is led by noted jazz trumpeter-bandleader and educator Jamie Breiwick — in January, and will be playing the Jean’s Jazz Series at the Racine Theater Guild, as a part of that project.
The Blujazz record label, which released the orchestra’s latest album Take It All, has sent to the MJO Grammy consideration links for 2022. Everyone interested in voting, can use these links to vote and then also share those links with any interested jazz enthusiasts, musicians, or writers.  Here’s the link:
Grammy voting guide 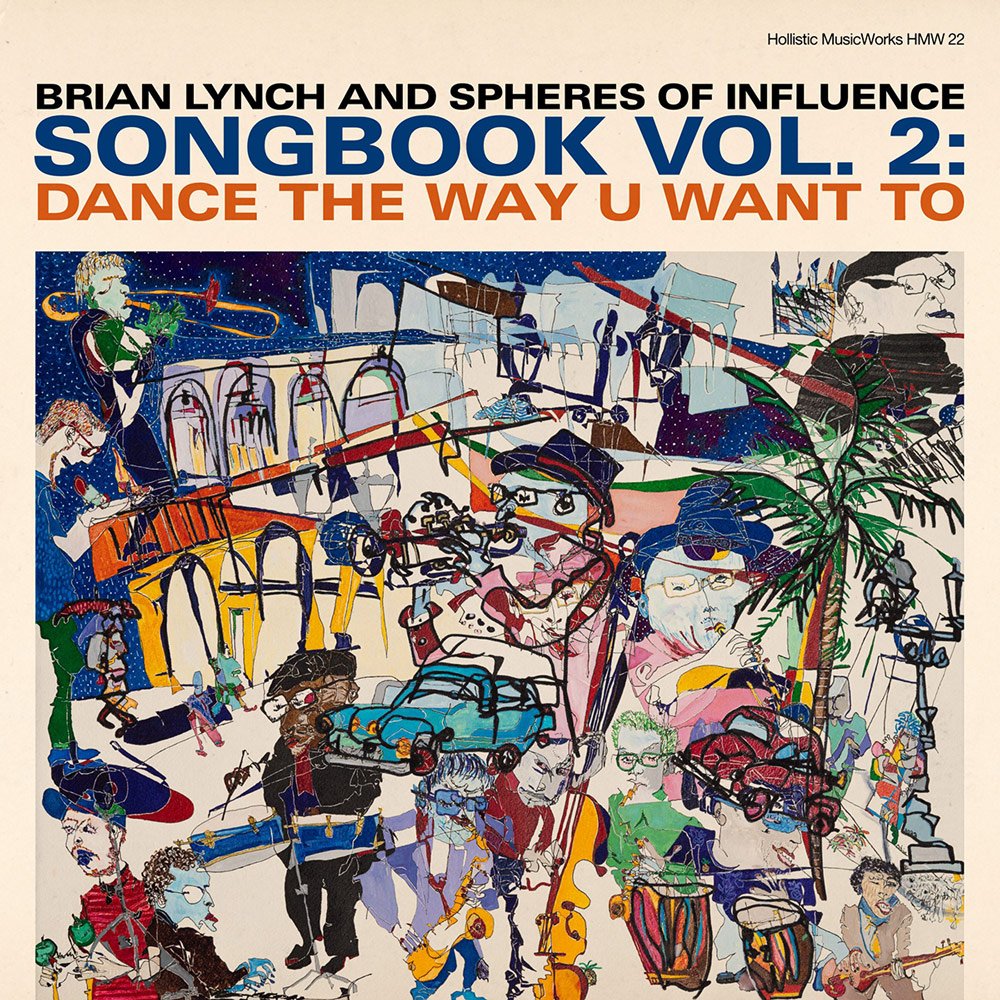 Brian Lynch’s trumpet burns, sings and rings the chimes of freedom, within your musical mind, and body.

He is also among the very best — among a steady but small class of musical culture- forgers. Nope, not forger as in faker.

I use forger, the perhaps nakedly exposed subject noun, because Lynch is forging fresh original musical edifices that dance in the wind, as he honors and plumbs the past. He’s mastered the modern jazz canon and advances the vernacular like nobody’s business.

He now supposes to ask: What about my sense of melody, harmony, and composition? He’s proven his ability’s on Songbook Vol 1, and across his storied career. So this is a typically high-grade Lynch release with studio players of any renown, of his choice.

Spoiler alert: Lynch wrote all the tunes on Songbook Vol. 2: Dance the Way U Want To.

Fear not. This is a typically high-grade Lynch release, with chosen studio musicians of any renown, of his choice, all ace purveyors of Cubano-Latin Jazz. 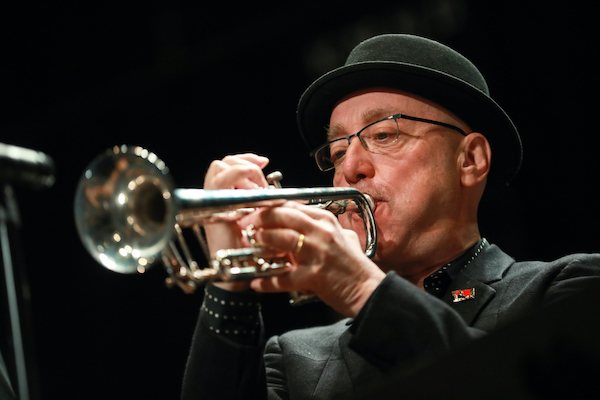 ‘Tis is as much fun as you can have on a Brian Lynch album, even as its musical limbs are plenty meaty enough to step further into the fray of chaos, to make gleaming, spontaneously choreographed, swinging music out of it. He knows how to do that as an composer and arranger, having worked in the highest levels of mainstream jazz, in most of its group forms. (specific review at bottom)

After all he’s a Grammy Award winner for his own big band’s brilliant recording The Omni-American Book Club/ My Journey through Literature in Music. The two-CD session featured Donald Harrison, Regina Carter, Dafnis Prieto, Dave Leibman, and Orlando “Maraca” Valle, and Jim Snidero. Lynch burnishes the modern big band style with literary influences that speak profoundly to the troubles — and defiant potential — of a less-than-humane world, tight-roping their humanity between capitalists and real or neo-authoritarian governments.
His musical ensemble comrises various people he works with often in his Latin American musical travels as a music professor in Florida and through jazz upper circles of influence.

That two-CD aIbum grew from his deep reading of, among other writers, the pioneering African-American sociologist, socialist, historian and civil rights activist W.E.B. DuBois. The album — featuring Donald Harrison, Dave Liebman, Jim Snidero, and Regina Carter, among others — climaxes a series of concept albums involving tributes to “unsung heroes” among trumpeters, a sequence which included his 2016 album commemorating the work of the great, short-lived post-bop trumpet master Woody Shaw, titled Madera Latino. That two-CD set — which also features fellow trumpeters Dave Douglas, Sean Jones and Philip Dizack — was Grammy-nominated for Best Latin Jazz Album. All of the trumpeter-tribute albums and the big-band recording are on Lynch’s own Hollistic Music Works label.

His previous album Brian Lynch Songbook Vol. 1: Bus Stop Serenade, suggested his own street cred, and shows that he long ago found his own voice as a composer, as well as a trumpeter, on previous recordings. Those often involved African-American recording collaborators and mentors like Milwaukee’s Melvin Rhyne and Buddy Montgomery, and saxophonists Harrison, Ralph Moore and Javon Jackson with whom he paired up for the front line of the final edition of Art Blakey and the Jazz Messengers, perhaps the most legendary hard-bop band in jazz history. He also worked with another iconic hard-bop group, The Horace Silver Quintet, a post-bop quintet with Phil Woods, as well as the ground-breaking Toshikio Akiyoshi-Lew Tabackin Jazz Orchestra.

Following are a few photographic lights of fire in Brian Lynch’s long legacy. What follows is my review of Songbook: Vol. 2, to be released Aug. 12. 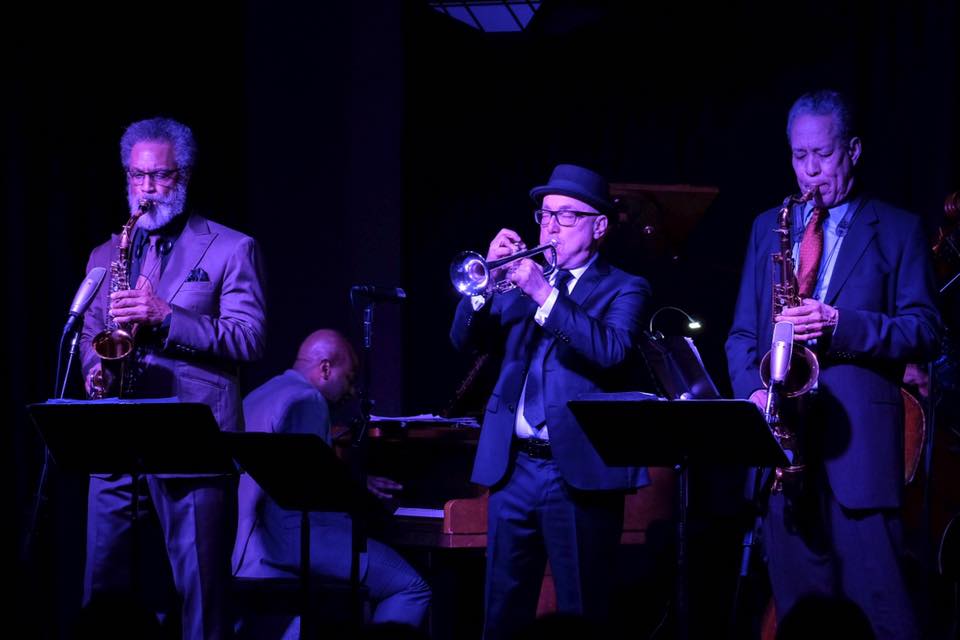 Brian Lynch and Spheres of Influence — Songbook Vol. 2: Dance the Way U Want To (Hollistic MusicWorks)

Most musicians wouldn’t revisit their own original material, except in concert. But trumpeter Brian Lynch has always probed deeply into many of his artistic forebears, in his “unsung heroes” series and superb Woody Shaw tribute albums, among others. He eventually realized he’d accumulated a deep repertoire of his own originals worthy of reimagining, and owning a label allows this. His self-inquiry remains fruitful on Songbook Vol. 2: Dance the Way U Want To. It’s a way of highlighting his personal “spheres of influence,” which he traces to his early days with Milwaukee’s Latin Jazz band La Chazz. He crafted a style by expanding the bustling crossroads of Latin and modern jazz forms and expression.

Songbook’s subtitle is a key, undercutting any pretense of honorific self-regard, and suggests: “Respond any way you choose.” Some Latin tempos get fast and complex, yet you can “dance” along, literally, or figuratively – “go with it,” by halving the tempo and soaking it up. Yet Lynch invariably takes you by the hand, with his ever-affable lyricism, a rare gift for melody, even in the most heated trumpet improv. A primary “influence sphere” is the great pianist Eddie Palmieri with whom Lynch earned his first Grammy Award on 2006’s Simpatico. The opener “E.P.’s Plan” offers bristling horn harmonies, and Lynch’s solo pushes ideas like a dancer leading a mambo clave with el diablo. By contrast, “Across the Bridge” is a measured theme, seeming to signify a sturdy bridge for Latino and Norte American forms and sensibilities. Pianists Kemuel Roig and Alex Brown especially sustain the tricky Latin rhythms while expanding on sinuous solos, over electric bassist Rodner Padeilla, drummer Hillario Bell and percussionist Murphy Aucamp. 1

Among a wide-ranging wealth of Lynch “dance songs” is a lovely speculative breather, the elegant bolero “Que Seria La Vida” (What Would Life Be Like?). It would be far poorer without the growing Brian Lynch oeuvre.

This review was first publised in shorter form in The Shepherd Express: Brian Lynch Songbook review 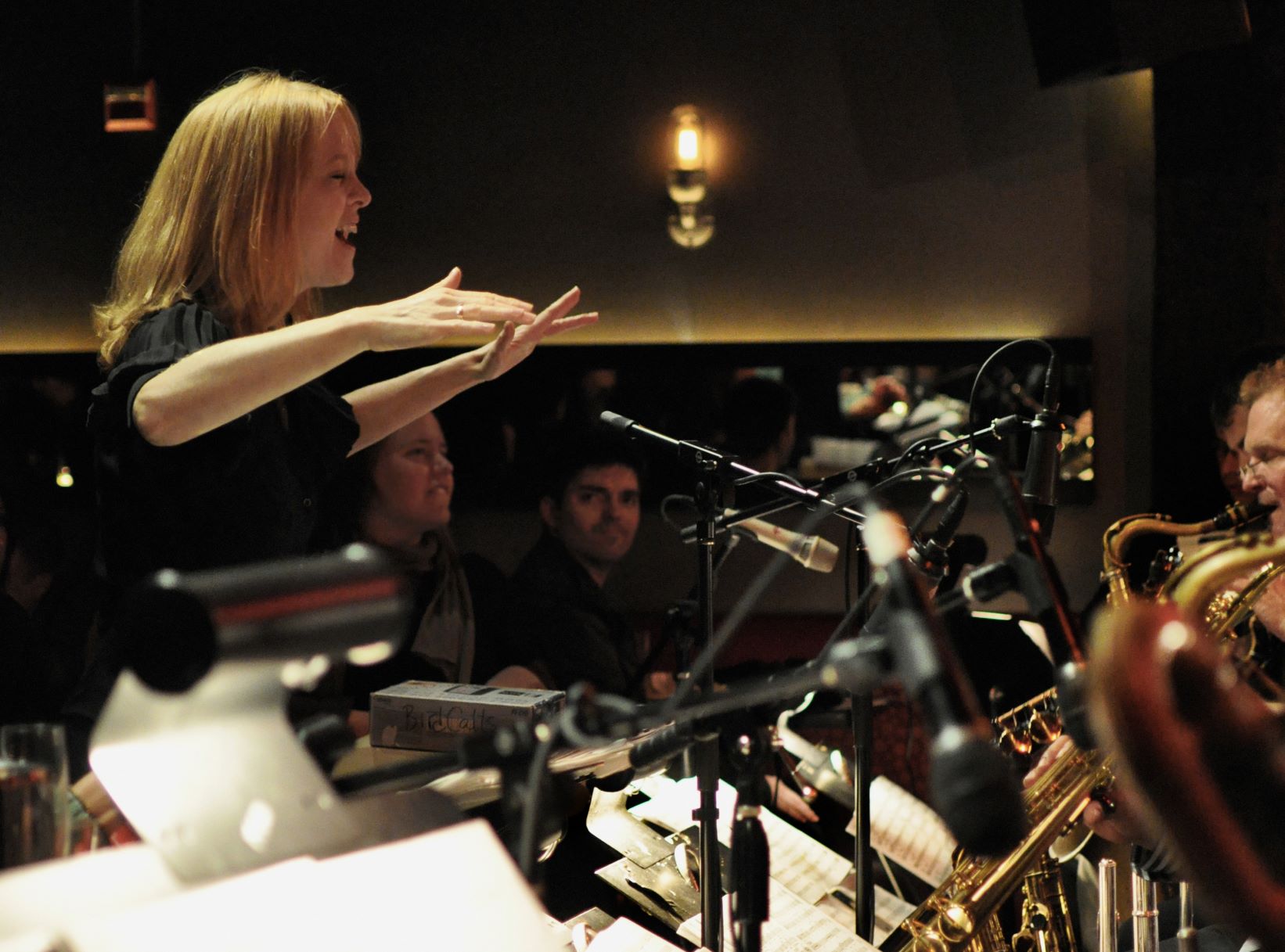 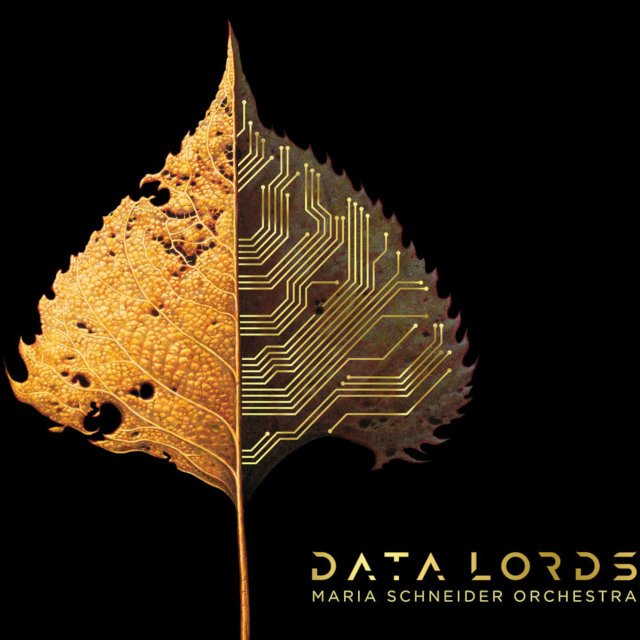