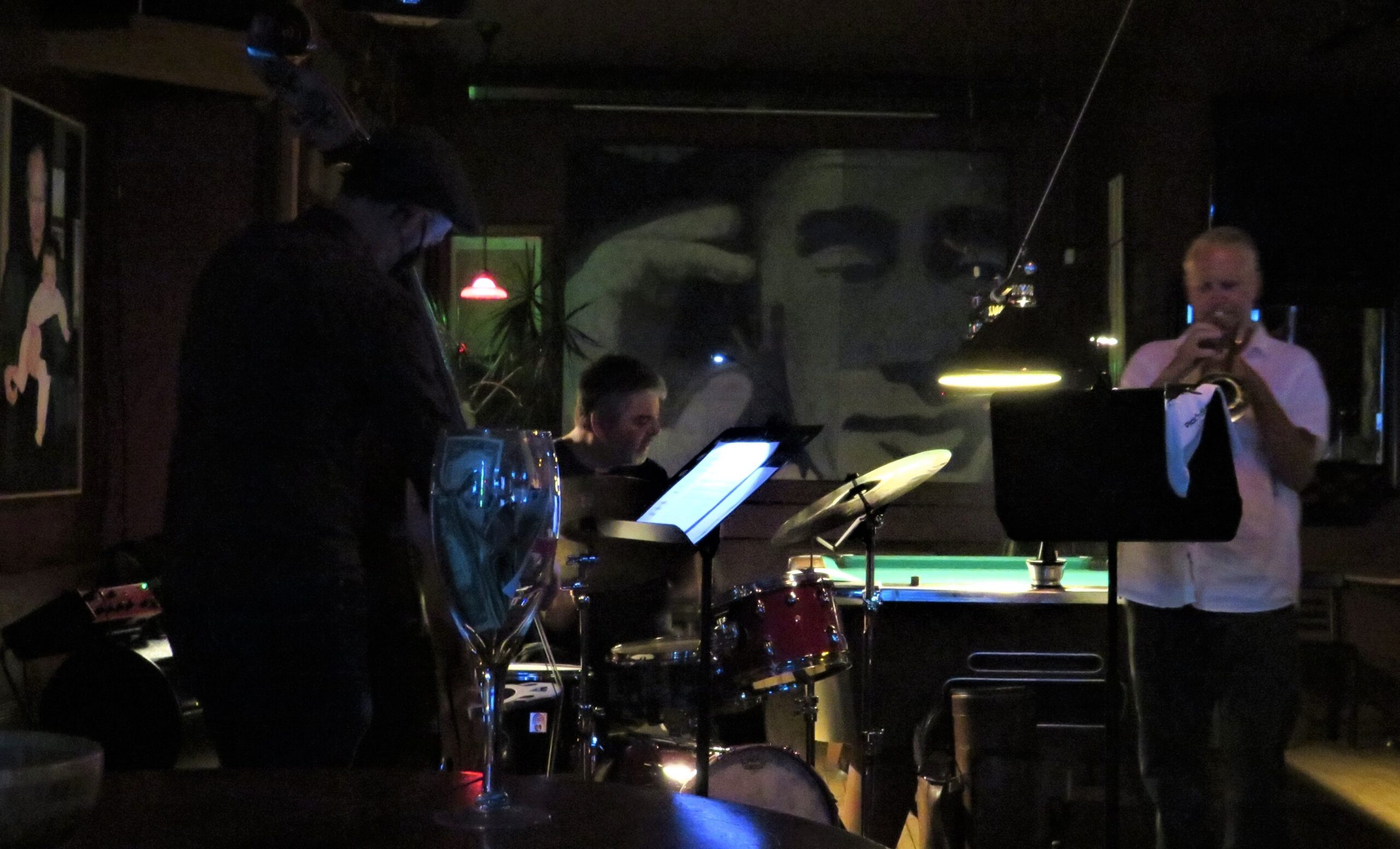 The musicians tip jar, accompanied by The Dave Bayles Trio, at The Uptowner Bar. All photos by Kevin Lynch

THE DAVE BAYLES TRIO AT THE UPTOWNER BAR, EVERY TUESDAY

“I took the one less traveled by/ And that has made all the difference.” – Robert Frost, “The Road Not Taken.”

Dave Bayles is something of a poet of the drums. Since the drums are the most fundamental of instruments in jazz, and in most African-American vernacular musics, that sort of makes him a poet of musical essences. You can hear and feel the magnetic power of his verse-like cadences in the propulsive swing he generates with other musicians. 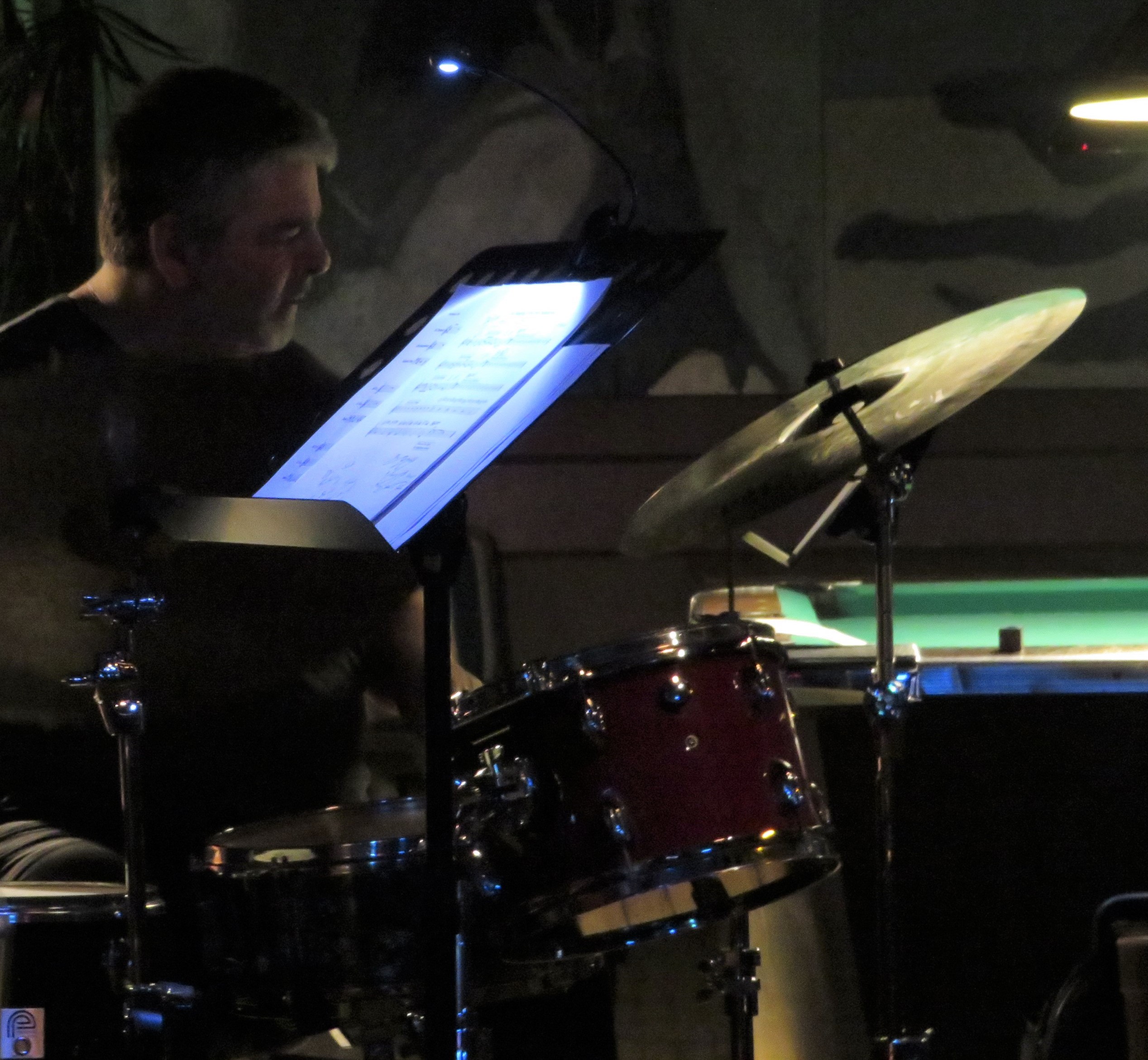 Drummer-bandleader Dave Bayles at The Uptowner

However, all that implies a well-trod path, gilded with justifiable esteem, along which the heartbeat of modern mainstream jazz strides. Fair enough.

And yet, quiet as it’s kept, the drummer-bandleader has led THE DAVE BAYLES TRIO, an intimate and compulsively exploratory trio gig through the backroads of the pandemic to the present – every Tuesday night at The Uptowner Bar, on the corner of Humboldt Boulevard and Center Street in Milwaukee. 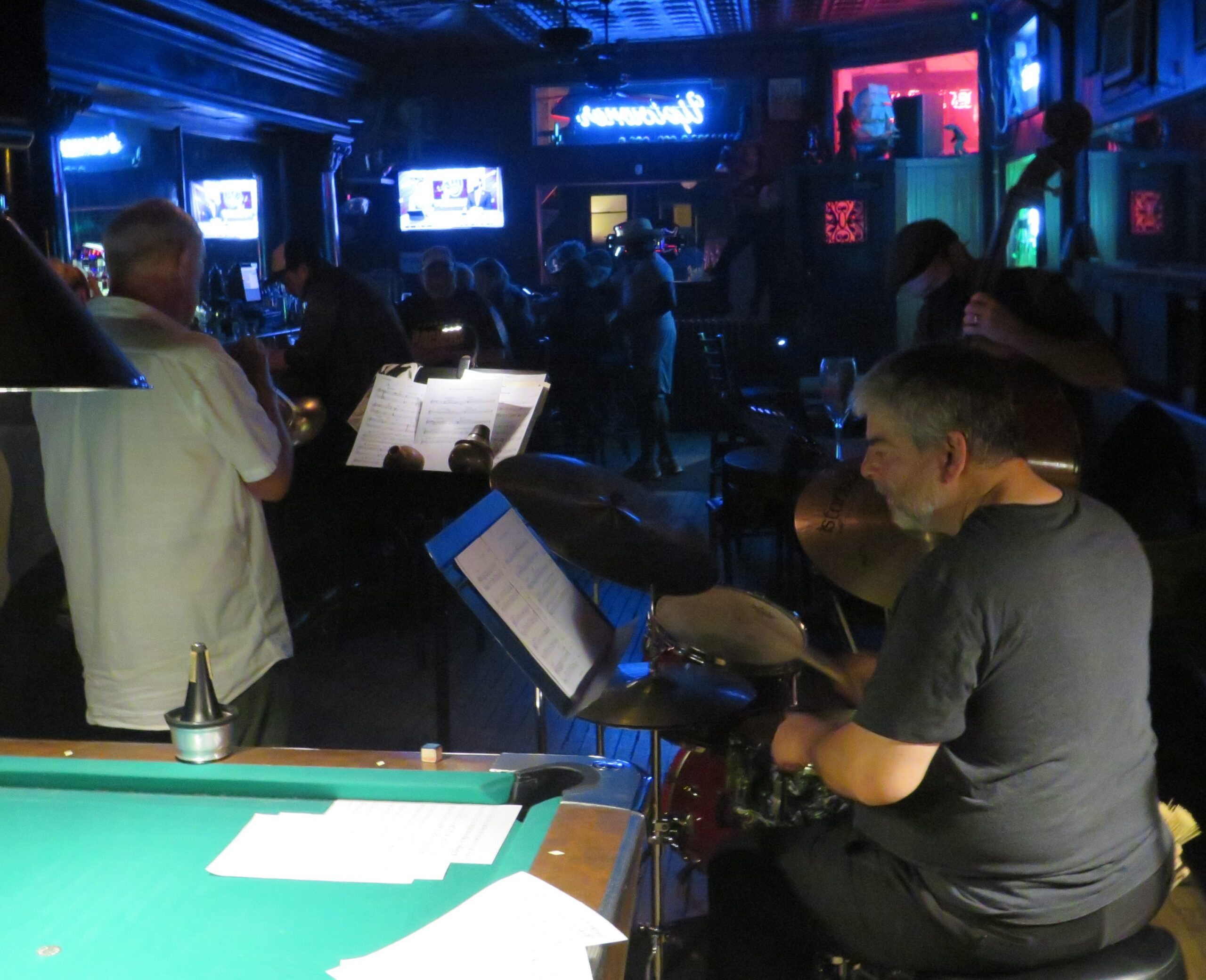 “It is a delightful, creative group that I thoroughly enjoy,” Bayles muses modestly. Yet the trio has built much intrepid synchronicity along the road not taken. They plan on releasing a live album recorded at The Uptowner.

The regular trio includes the redoubtable and elastically adaptable bassist Clay Schaub. Out front is Russ Johnson, IMO the Midwest’s most powerfully creative and masterful trumpeter – north of Chicago’s Wadada Leo Smith and Marquis Hill, who now actually spend most of their time on the East Coast.(p.s. This Tuesday, July 12, Johnson and Schaub will be out of town. They will be replaced for this week by alto saxophonist Clay Lyons and bassist Doug Hayes.) 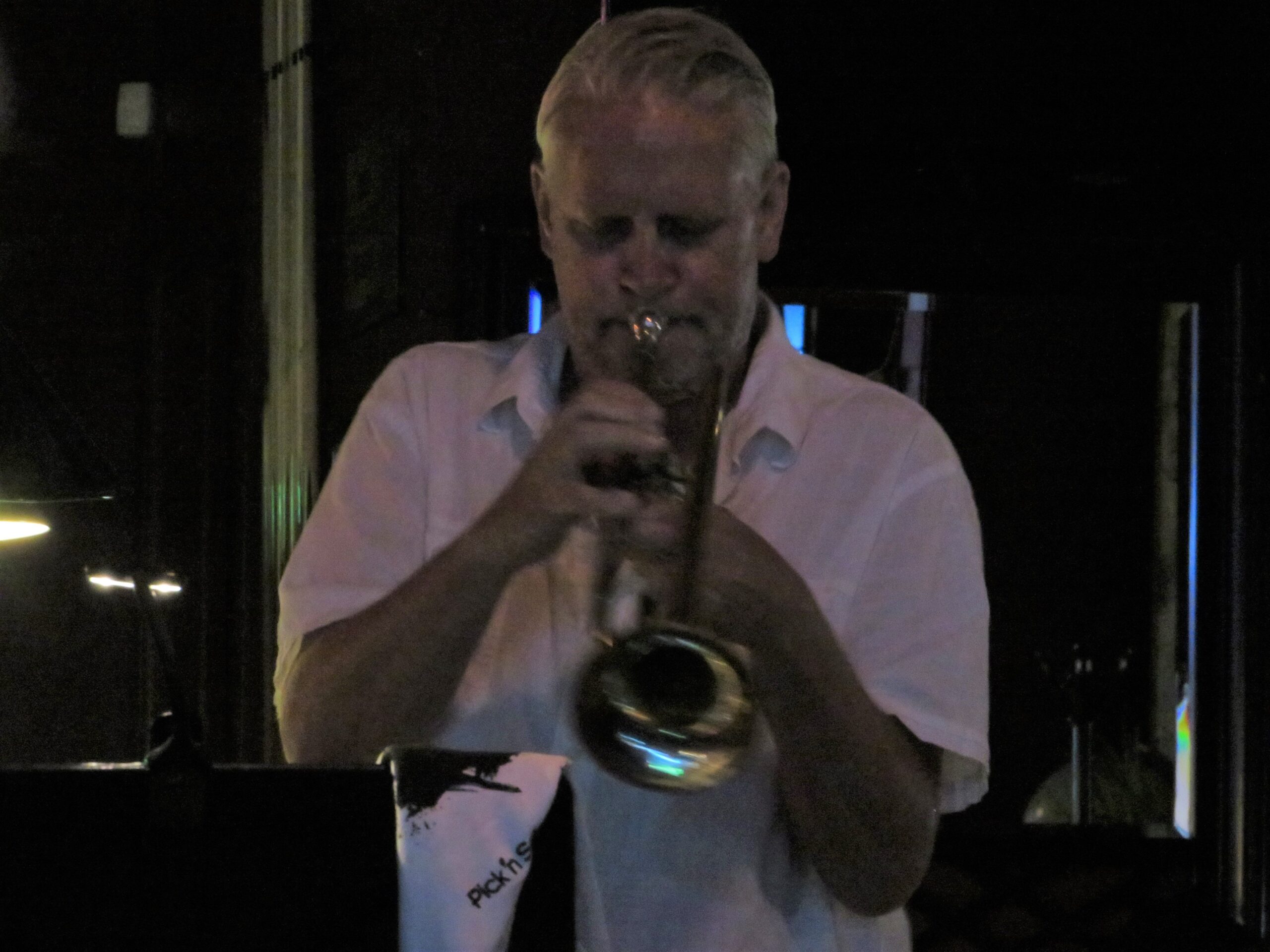 Russ Johnson at The Uptowner

So, if you stop by on a Tuesday night, you’ll begin to sense the phenomenon of talent and creative verve that sustains Johnson’s pre-eminence, which he reasserted recently in Madison in an all-star jam session led by the brilliant pianist-composer Johannes Wallmann, to celebrate the retirement of two veteran and beloved Madison jazz radio programmers. That night, Johnson’s trumpet blistered through the firewall of wonder when the music called out for it, and sang seductively at other times.

The informal vibe of The Uptowner is conductive to experimentation and unfettered daring, to venturing a few huge steps beyond.

So, if you want a taste of what the great jazz writer Whitney Balliett once called “the sound of surprise,” stop on by.

The venerable building that houses The Uptowner recently had its roof replaced, and Bayles relates that “someone said that one night we blew the roof off the joint.” Hyperbole? It may not be so improbable. This ship is full-steam ahead. Bayles asserts, “The gig will be going on until the building falls down.”

Here are a few photos of the group at The Uptowner, “workin’ and steamin’ ” into a stratosphere that’s a free ride for all patrons. 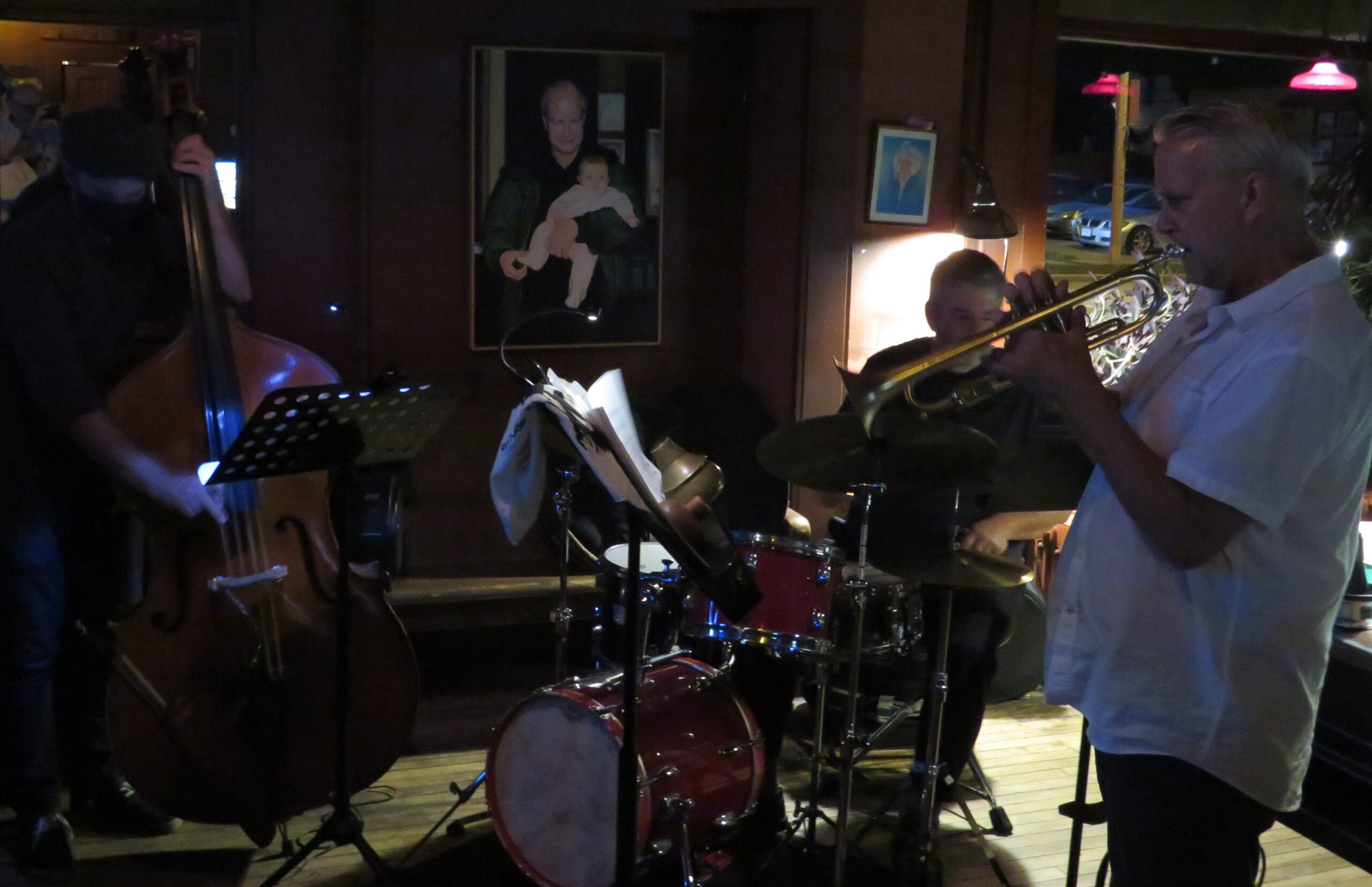 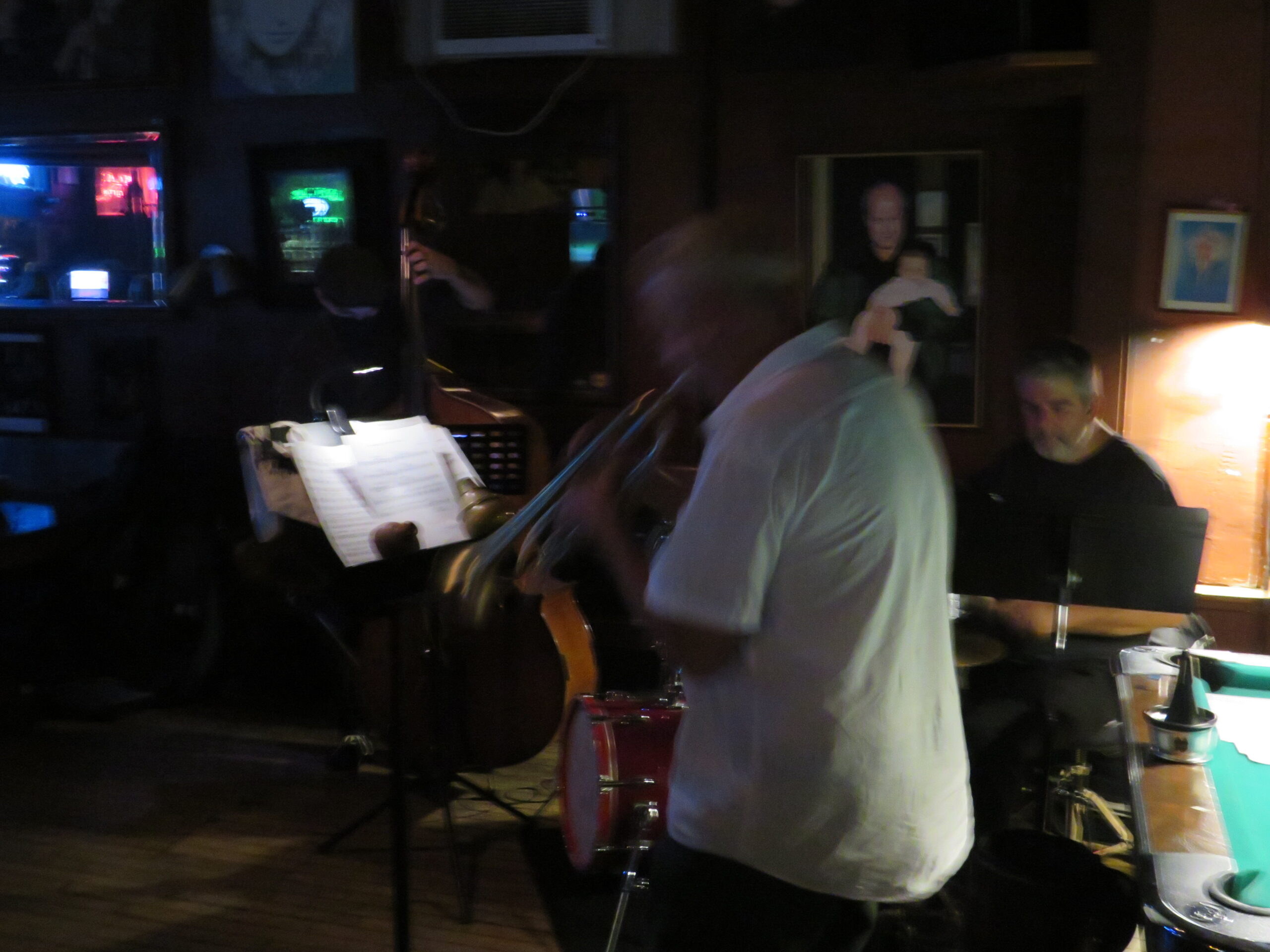 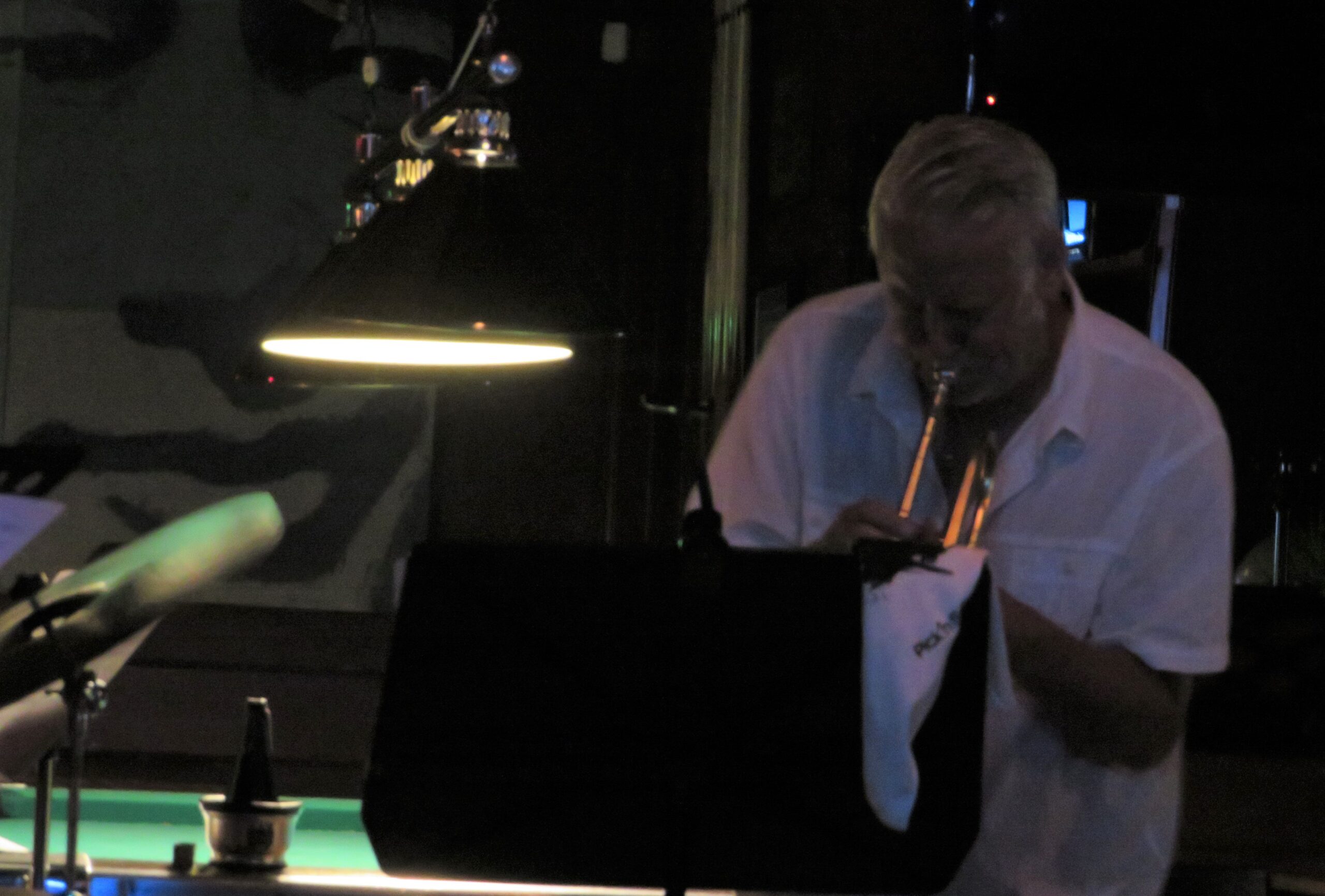 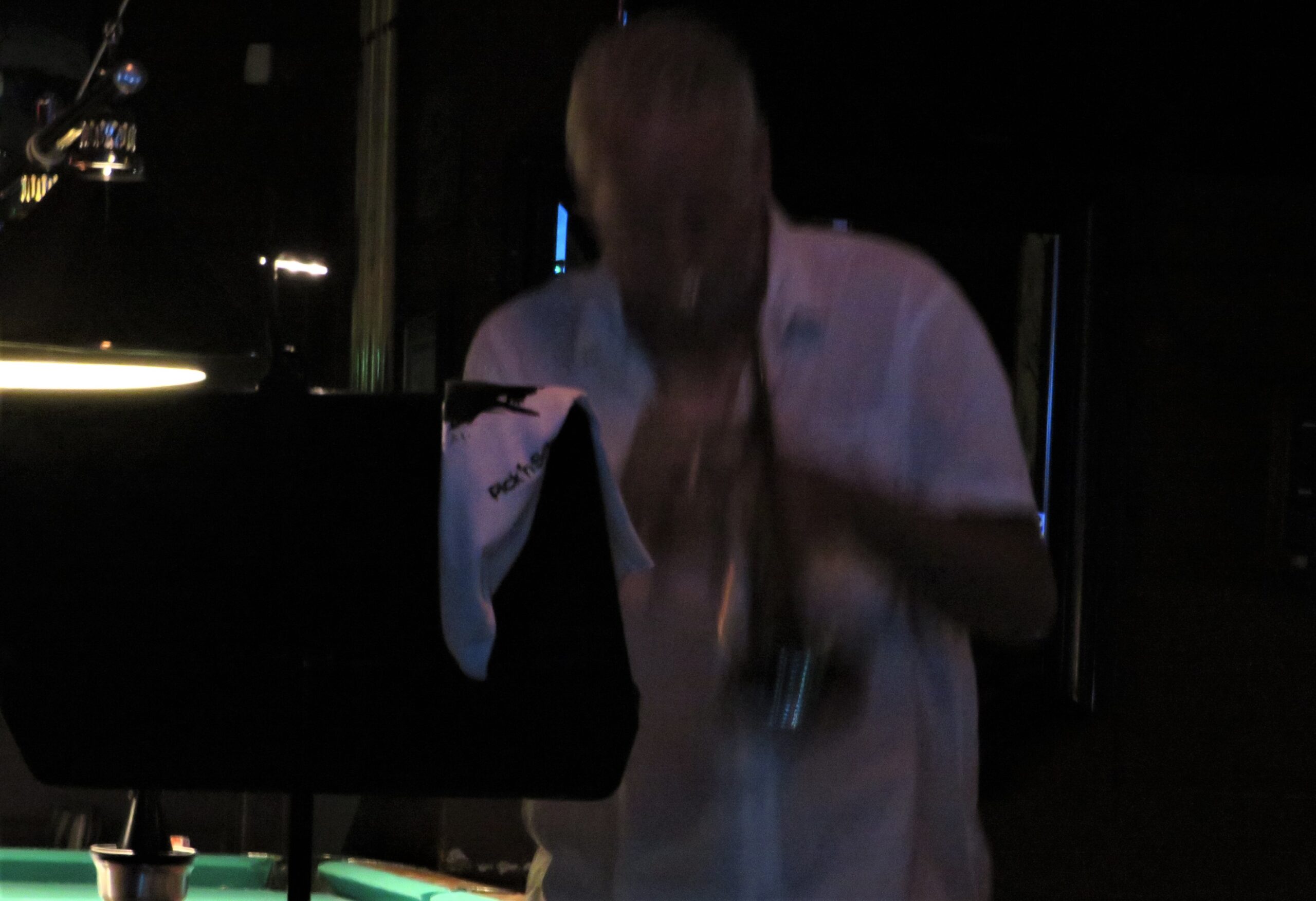 THE DAVE BAYLES QUARTET AT RIVERWEST PIZZA: And yet, now that summer is high, Bayles is about to debut a new quartet outdoors, on the beguiling terrace of Riverwest Pizza, 932 E. Wright Street, from 6 to 9 p.m. this Friday, July 8. This quartet features singer Pamela York, saxophonist Chris Medsen, and bassist Jeff Hamann. Bayles hopes to continue this gig, though at intervals less frequent than his trio at The Uptowner.

Regardless, this quartet promises to be a breath of fresh air, in the best sense.