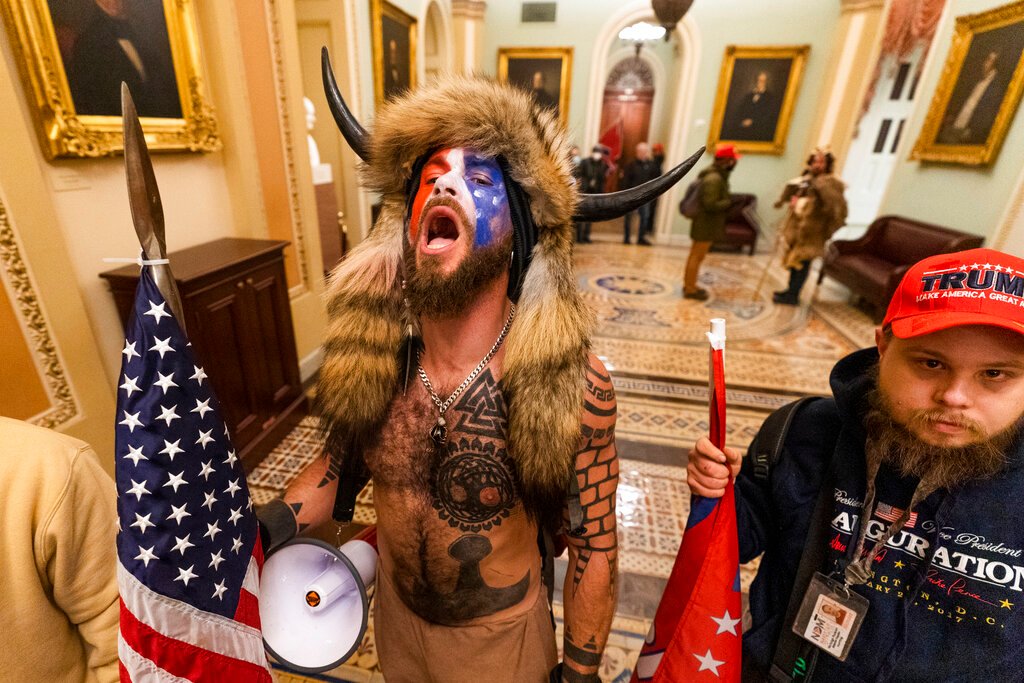 A supporter of President Donald Trump chants outside the Senate Chamber inside the Capitol, Wednesday, Jan. 6, 2021 in Washington. (AP Photo/Manuel Balce Ceneta)

” ‘People were angry when the projections came out. People said they wouldn’t stand for being a minority in their own country.”

“Now there are troops at the border,” I said. “and shootings of black and brown and Jewish people.”

Taylor nodded. He contemplated the meaning of that. “So the real question would be,” he said finally, “if people were given the choice between democracy and whiteness, how many would choose whiteness?”

We let that settle in the air, neither of us willing to hazard a guess to that one.’ ”

— from Caste: The Origins of Our Discontent, by Isabel Wilkerson

My ensuing thoughts formulated on Martin Luther King Jr. Day. So let’s pause, peer out at the horizon of our souls, and see if we can see, above and beyond, any glimpse of “the mountaintop,” “the promised land” or that ever-mystical “arc of justice”?

The question, to me, posed above, came from Wilkerson’s profound and necessary book. The query has settled in the air just long enough for me to hazard a response.

There on the ground before us, the question prompts another one: What does “whiteness” mean in the context of losing our democracy? It ostensibly would mean benefiting a new white minority aggrieved, for fears of not being the most populous ethnicity. More to the point, they seem unaware of, or to not acknowledge, that the desired change means losing the freedoms — those that are typically lost in the authoritarian nations that have challenged democracies around the world in recent years. If you are white, what good is it if you lose the privileges your white privilege had afforded you? And a statistical minority hardly means, by itself, that the deeply uncased conventions of systemic racism will suddenly disappear, or be appreciably weakened.

This was a manifestation that power at its worst, of domestic terrorists.

And there’s no mistaking it, Donald Trump lusts to be an authoritarian “strong man” like his professed idol, Vladimir Putin. The neurotic depths of his narcissism will allow him no other sense of truth, Thus, he’s incapable of admitting defeat. So, this is classic case of followers fighting against their own interests, and for only the presumptions of social systems hundreds of years old, which systemically enslaved and lynched, and still discriminate against and prolifically incarcerate, people of color. A system that allows men to be punished, or killed, simply for breathing.

The larger point is that authoritarian governments by definition benefit those in authority, and those with the power to directly curry favor and influence with such authorities — typically unprincipled rich people. Ordinary palookas clinging to guns might coerce or steal freedoms from those threatened, but in the contemporary world if you’re merely “free.” you’re gonna struggle mightily as a lone wolf even if you have a big hunting pack. That’s because in a society is geared to an array of financial demands that only a system with a democratic government provides. If you don’t like the government, democracy allows you to peaceably replace it, through elections.

So how many would choose whiteness over democracy? One would sadly assume a certain percentage of the most radicalized, fanatic, racist and aggrieved Trump devotees. Even if Trump himself truly fades away (increasingly likely), “Trumpism” won’t soon and it may attract a new more intelligent and strategic avatar. That is the fear of lovers of democracy and its freedoms and political beauties.

Even after the Capitol travesties, most Republican legislators remain largely craven in fear of losing the Trumpism vote.

As CNN senior political analyst Jeff Greenfield commented on Republicans called for temperance rather than impeaching the president who incited the deadly attack: “Forgive me, but the cynic in me thinks that’s like the teenager who kills his parents and pleads for leniency because now he’s an orphan.”

But the issue remains saving democracy, or saving whiteness. By activism of a genuinely patriotic kind, that is still exemplified,  by Martin Luther King Jr. , as much as any leader.

In his biography of King, the brilliant writer and public intellectual Michael Eric Dyson explains, King’s was a “patriotism of flesh and blood, born of the holy obligation to provide a bridge over which the words of democracy might march from parchment to pavement. His most enduring trophies were the calluses he gathered for marching for justice and merciless heat in the sore knees he gained bending to pray for enemies he defiantly loved…

King’s version of love of country was certainly challenging. It drew a contrast between belief in the strange providence of God, which is often disguised unpredictable events, and the idolatry of a nation that it is a damaging counterfeit of true patriotism. King understood that authentic patriotism depends on telling the truth about the nation in an effort to help it achieve its highest destiny.” 1 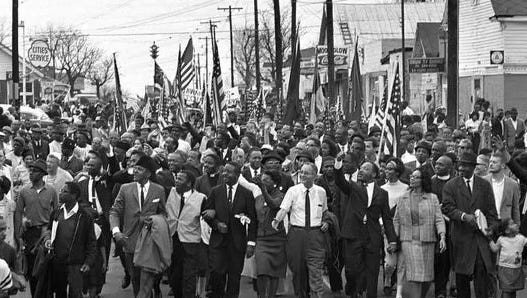 In our times, such idolatry has been offered up to a con-man president who promised the moon and delivered the dregs of his rich cronies’ empty bottles, at best.

And “telling the truth about the nation to help achieve its highest destiny” has been lost in the cacophony of social media and politically supine news media, so that those susceptible live in an alternate’s universe, a pretend reality. But the siege on the Capitol was no pretend exercise, it was a “well-coordinated attack” on the heart of our democratic government, according to acting deputy secretary of Homeland Defense, Ken Cuccinelli. Time will tell of who did the strategizing, and how.

Meanwhile, here’s a report based on extensive viewing of videos of the mob attack, posted by participants:

“Our house. It is the most dominant phrase of any of the chants shouted by the mob as it presses into the Capitol. It is an expression of entitlement — white nativist entitlement, as many have noted: This is our house, our country. It’s the entitlement that leads one invader to pick up a phone in a Capitol corridor in one video and say: “Can I speak with Pelosi? Yeah, we’re coming for you, bitch. Mike Pence? We’re coming for you too, fucking traitor.”

What is striking about the videos, though, is how often this entitlement is laced with insecurity. The attackers profess ownership of this house, but so much of their commentary betrays discomfort and alienation within it, bordering on a sort of provincial awe. “This is the state Capitol,” a man says to his young female companion inside the visitor center, his struggle to grasp the grandeur of the place encapsulated in his incorrect terminology. “It’s amazing,” she says, as a man dressed as a Roman centurion, complete with sandals, wanders by.” 2

Where will these people wander off to, those who aren’t convicted of crimes and jailed? What do they hope to gain? The world to lose their souls? And yet they’ll likely gain, in a totalitarian regime, the “world” in a paper bag. Such are the rewards of delusional idolatry.

Am I being unfair to these people who believe baseless propaganda, rather than facts? They convey a kind of pathos, a sense of a patriotism they believe in. So pity is stirred.

But too many are the kind of hate-filled extremists — racists, Neo-Nazis, the wildest conspiracy-mongers — who any reasonable person would despise. And enough of them brandishing paramilitary weapons remain a threat to our way of life and governance, to the historically vast majority who voted for Joe Biden, and a threat to potentially anyone else, including themselves.

Actually overcoming our government by military force is quixotic, so they will inevitably fail, but not without further damage to our nation’s most precious values and functions.

After Trump’s sagging gasbag wheezes away in the wind, no one can say for sure what darkness lies on the horizon. We can brace ourselves, live our lives, and build them on the power of love, as King, Jesus, Gandhi, John Lennon, John Coltrane, and other enlightened people counseled, and work to bolster our democracy. Our wounds, still open, need serious healing. Black smoke hovers over the looming sky yet the morning breaks anew, as ever. So may hope and action.