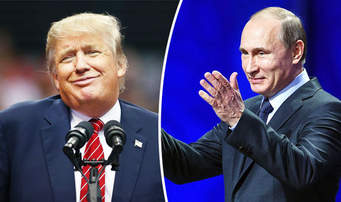 “The word mammoth is derived from the Tartar word mamma meaning the earth :”… From this some mistakenly came to believe that the great beast had always lived underground, burrowing like a big mole. And they were sure it died when it came to the surface and breathed fresh air!” – Roy Chapman Andrews from All About Strange Beasts of the Past (An epigraph to Lorrie Moore’s novel Anagrams)

“Whenever I’m serious, the only vocabulary I can come up with our words that have been spoken in the last 30 seconds. My sentences become anagrams sentences before. (That is an argument about intelligence and sexual fidelity in marriage”) – Lorrie Moore, from “The Nun of That,” from Anagrams

Has anyone been feeling furious lately, like right in the middle of the morning, without knowing why until they happen to check the news on their smart phone or turn on the tube?

Well, let’s try to focus that fury a bit into some something concentrated and somewhat analytic.

Let’s pay a little closer attention and start at a microscopic linguistic level. How might Trump morph into an American Putin? Is it any more than a coincidence that their two surnames are very pugnacious utterances when spoken aloud? Then notice how close they are to anagrams of each other. Try some letter juggling with Trump: “Pmurt.” Or “putrm.” Knock the second curve off the m, and you have “putrn.” Chop the curve off the “r” & pin it on top and you have Putin!

(Add the r to “putin” and turn the p upside down & you have “putrid.” How mellifluous.

A bit more seriously in a literary manner.  now certainly have perhaps the two strangest presidents to ever lead the two most openly antagonist superpowers in the globe. Trump and Putrid, I mean, Putin and Stump.

They are both mammoths, whose power is almost totally circular and inward-feeding from the energy and resources of the great nations they seem to be leading as elected presidents. 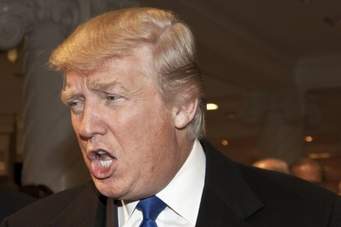 It’s a bit like a woolly mammoth, say, from rising up from a prehistoric grave like a Neanderthal man wearing a woolly mammoth coat and headdress. Everybody flees in horror and they try to blow down any courageous challengers who might be a lingering. The working class or the lumpen proletariat seem to like some of the outrageous racist utterances from Trump’s mouth: Mexican rapists, radical Islamists (so let’s get rid of all his Islam Americans, even though the vast majority of domestic terrorism in America since the war and terror began has been committed by domestic right-wing offensive proto-Nazi mass killers).

But when people go to his rallies or get all their information from social media things like the truth are easily filtered out and Trump fans love the huff and the puff.

Let’s imagine a little showdown between Trump and Putin in which they’re both stripped-down to shirtless and face off, with Trump’s southward-sloping profile his belly curves tantalizingly close to Putin’s chest, being quite a bit taller and fatter. 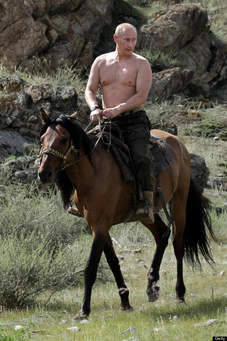 Although we’ve never seen Putin exhaling a big huff and puff, we’ve just seen the very posed photo op of him topless on a horse. But he seems to be in considerably better shape than Trump.

But the eyebrow-raising “bromance” between the two proceeds apace, to where we can only guess. We know that Trump admires Putin and probably wishes he was that smart and autocratic. Putin is possibly the richest man in the world because he has contrived to funnel a great percentage of his own nations GDP into his own bank account and is worth reportedly $86 billion.

As for Trump’s worth, who knows because he still hides behind a supposed audit to refuse to release his tax returns. We are aware of course that he lost something like $91 million a number of years back which may have allowed him to avoid paying income taxes for 15 years.

The Russian hacking of the U.S. election “was an attack on America, less lethal than a missile but still profoundly damaging to our system. It’s not that Trump and Putin were colluding to steal an election. But if the C.I.A. is right, Russia apparently was trying to elect a president who would be not a puppet exactly but perhaps something of a lap dog — a Russian poodle.”  – Nicholas Kristof, The New York Times

Is this a cruel, unfair metaphor? We know that Mr. Kristof, despite his Pulitzer Prizes, is one of those highly specious “liberals.” Consider, as per the Times’ Maureen Dowd, who seems to hate Hillary Clinton more than any other politician if you consider her journalistic track record. So she’s going to give her opponent a fair shake, no?

She wrote of the last debate: “Talking about Putin, Trump once more offered the simple reason he has flipped his party’s wary stance toward the Evil Empire, subjugating his party’s ideology to his own ego: ‘He said nice things about me.’’’

It seems the most disarming thing that any raging mammoth can do to this orange paper sabre-toothed tiger is not to stomp on him like Hillary Clinton did with mighty psychological glee especially in the last presidential debate, in which he finally responded with a devastatingly policy-dismantling riposte: ”Such a nasty woman.”

No, all a smart person like Vladimir has to do is ”say nice things” about him. The Donald seems to have an Pavlovian response to niceness when it is directed at him. This is the height of quasi-erotic banality, something that perhaps the French filmmaker Luis Bunuel might have worked into one of his satires of the empty lives of the bourgeoisie, laced with odd sado-masochism (think of Belle de Jour).

Of course, Trump is the bourgeoisie bloated into the upper 1%, his wealth is the whole buttressing of his self-esteem and ego. He seems to have no firm principles or values other than accumulating money and its attendant shiny object sheen and “prestige.”

So “saying nice things” to him, to disarm him seems a reasonable equivalent to petting a lapdog poodle. The little creature, with the funny red sweep of fur over his brow, and and involuntarily begins to wag his tail. He quivers and emits a tiny shuddering yelp of pleasure.

Is the tail wagging the dog? It certainly seems to be. Let’s remember that Pavlov was a great Russian psychologist and the best leaders of that nation have employed such manipulative powers, including Joseph Stalin. Look at Pavlov. 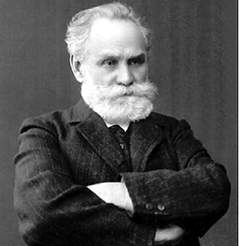 This is a man who knows what he want, and needs to do, to extract the desired effect in his object of experimentation which, by now, is well-accepted scientific psychological truth.

Add “NICE POODLE” (in soothing tones with steady strokes), to the left column of this chart. Then another “SALIVATION”.

Because the tail is being orchestrated by Vladimir Putin, like a hypnotist whispering to the alert tail, “You are getting verrry sleepy.” The tail begins following the Russian’s swaying vest clock… The poodle himself is virtually oblivious of this behind-the-butt love waltz.

You might also take one of those cute red “MAKE AMERICA GREAT AGAIN” baseball caps and put it on the head of Putin’s poodle, and his perky ears hold it in place neatly.

Such a “nice” image. Of course, that is nice mainly if we focus on the poodle’s perky, pretty posterior. If we look up front, prettiness, um, needs a napkin, or three. 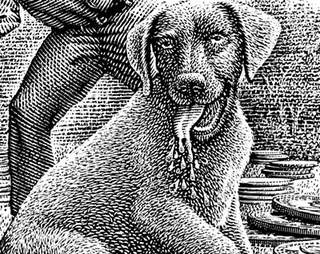 Now, this image of a “Pavlov’s dog” is not nearly as pretty as a lap poodle would be. But let’s imagine it starting as a Neanderthal in mighty-woolly-mammoth drag, morphing slowly into a fast-shedding shaggy dog, morphing into finally, a manicured lap poodle.

So  then one of his aides would read the whole column to him. You know what comes next .A detailed policy speech on culture intelligence strategies for responding to Russian hacking? Well, no. Maybe something more like, you know, what all (make America) great presidents do when challenged. He tweets. Eg.:

This nasty blogger and people like Hillary are just jealous because Putin says nice things about me, and not them! Ha Ha!

OK, he’s eloquent. So let’s give our Trumpoodle a break, especially with the “optics.” 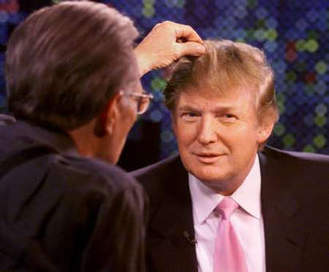 Okay, Okay, Trump fans who have, or are capable of, reading this far. I’ve tried to include lots of pictures. (I wonder, would The Donald read this far? Sure, if he scrolls down and sees his own face. So he’ll probably start reading around here. Sensing this possibility, I am striving for a bit of a Pavlov angle here 🙂

I am certainly willing to wait to see how the “president-select” (see the Electoral College fiasco) Trump “performs” once he puts his paw on the Bible and takes that solemn oath with a few muffled “ruffs”.

However, seriously speaking, what is scaring me is his cabinet appointing. If approved, it will be the most radically right-wing one in American history.

Trump media relations will be based on a propoganda mode; a daily misinformation campaign. Note his recent comment on the Russian hacking of the Democratic party files: “In the computer age, nobody knows exactly what’s going on.”

Media critic and professor of journalism Jay Rosen comments: “Journalism that tries to find its public through ‘inside’ coverage of the political class is vulnerable to rejection by portions of the public that are busy rejecting that class.  This is a hard problem, to which “listening” sounds like a soft, warm and fuzzy solution. It isn’t.”

The media needs to find fresh ways of actually listening to the public, especially that which completely distrusts the press, following Trump’ cues fervently.

Rosen extensively quotes Andrew Haeg, CEO of the journalism start-up Groundsource, who has a smart approach in mind.

“Haeg recently tried to sketch what a ‘listening’ model looks like. I found inspiring his imaginary description of a two-person listening team:

They print and post handmade signs in grocery stores and truck stops: “What should we know?” with a phone number to text or call. They FOIA 311 data, download 211 data from the United Way, use Splunk and IFTTT and other tools to trigger alerts when key community datasets are updated. They hold town hall forums, set open office hours at local coffee shops and diners, and form key partnerships with community organizations to invite underserved communities into the conversation. They build a community of hundreds who ask questions and vote on which ones get answered, get texts with updates on the newsgathering progress and ongoing opportunities to share their concerns and stories. The community feed that develops is rich, authentic, and often shockingly prescient.

A new strategy by the press in the interest of factual truth for every citizen to use, no matter how they voted, is crucial to the new American surreality that Trump toys with daily.  Or is it Putin doing the reality-manipulating daily, via his lap dog, right here in our very own virtual back yard?