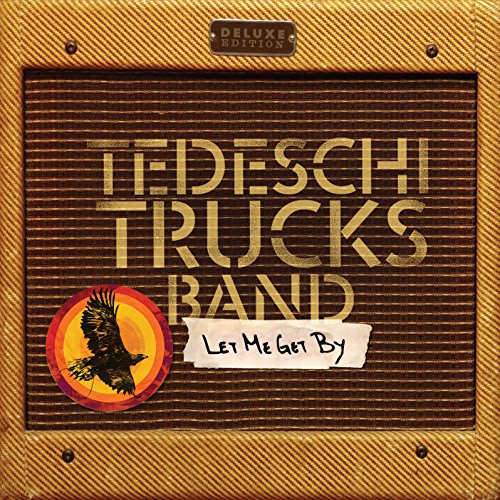 The cover of the box-set 2-disc deluxe edition of “Let Me Get By” mimics a vintage guitar amplifier. amazon.com

The bonus deluxe edition of the Tedeschi Trucks Band’s latest album Let Me Get By further demonstrates how you can turn a stylistic assessment of this remarkable band into a parlor game. Try pigeon-holing them — short of a six or seven-hyphen phrase —  and they’ll invariably squirm free, or break the bindings. That’s another of the metaphorical meanings of the album’s eloquently powerful cover image of a Mongolian eagle, flying free from his master’s binding.

The cover of their bonus disc is a photo portrait of the same eagle perched on the leather-sheathed hand of the ornately outfitted eagle hunter who, though unnamed, appears Mongolian himself, with his thickly fur-lined hat, and long coat reaching to the tops of his tall boots, which can ford deep snow drifts.

So it’s a pan-cultural nod to the Eastern influences that make this a group defy even the multi-various vernaculars of American roots music.

I said in my first blog review of the basic album Let Me Get By (here: https://kevernacular.com/?p=7331) we’ve never seen anything quite like this band before. I stand by that, however their precursors are three personnel-related groups — Derek and the Dominoes, Delaney and Bonnie, and Joe Cocker’s Mad Dogs and Englishmen. So Eric (“Derek”) Clapton is a visionary forefather. 1 Yet TTB has encompassed influences beyond what any of those groups ever did, by standing on their shoulders. Plus, they’re already longer lived than any of those, with no signs of slowing down.

All the styles, solos and 12 performers might sound messy in terms of musical structure and arrangements and, at times in the past it has been, but mainly in close listening as the power of their grooves usually carries along loose ends.

The success of the new album reflects the fact the band spent more time in the studio than in any recording project before, according to album annotator Ashley Kahn. It helps that their Swamp Raga Studios are in the Jacksonville, Florida home of Susan Tedeshi and spouse Derek Trucks, and that the group functions almost as an extended family.

The overall musical quality of the ensemble also seems upgraded since jazz bassist Tim LeFebvre came aboard last year. Lefebrve’s credits include jazzers Donny McCaslin, Wayne Krantz, Chuck Loeb, and jazz-contemporary classical’s Uri Ciane. Also he recorded  with the late David Bowie on his already now-celebrated last album Blackstar, which also includes McCaslin and several other top jazzers. LeFebvre co-wrote three songs on Let Me Get By, and actually flew between Bowie’s New York studio and Jacksonville during those albums’ overlapping dates. LeFebvre clearly facilitates the band’s inclusion of the 1971 Bowie  song “Oh! You Pretty Things,” which they cover on the deluxe album second disc, and which I’ll address below.

The fluency of several complex, stirring ensemble passages on both discs heightens the collective groove and may betray the arranging and playing skills of LeFebvre.

Along with three alternate takes of the new album’s songs and the Bowie cover, the deluxe-set disc includes a  quirky quintet studio instrumental “Satie Groove,”  and a three-song update on the band’s celebrated live-concert prowess — one song from the new album and two covers, recorded at New York’s Beacon Theater. 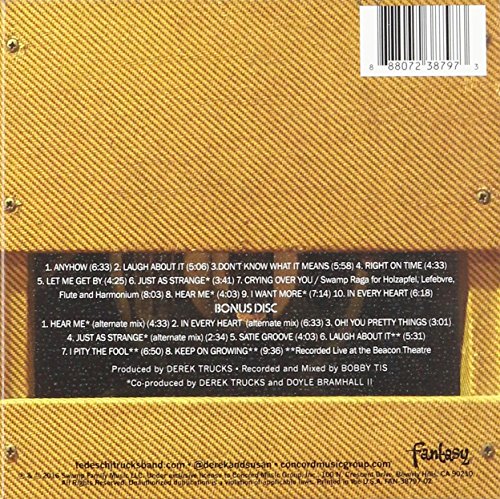 The first of the three alternate takes is a LMGB song I haven’t commented on previously: “Hear Me.” It opens like a long dusty trek, but it calls to a lover who may or may not be left behind forever. TTB seems very strong conveying that welter of feelings on the verge of break-up or post break-up, when life both shrinks and one imagines so much is possible, for better and worse.

Their lyrics’ deft rhetorical ambiguity allow such songs to resonate for many losses and failures in life. Reminding the loved one “we were one in a million years” speaks to the profundity, grandiosity and cavernous sense of loss in shattered romance. Here Derek Trucks shows his lyrical side, drawing from The Allmans’ singing guitar style of Dickey Betts, specifically his alternating oblique note bends, which mimic a pedal steel.

The live version of “In Every Heart” is slower more burdened and stripped down, but Trucks’ animated solo almost sounds like a conversation with his own heart, recalling Clapton’s buzzing blues style, perfected on Derek and the Dominoes classic album Layla.

Bowie’s “Oh, You Pretty Things,” fits this group’s POV, as a challenging but stirring appraisal of the human race that finally advises: Look at your children/ see their faces in the golden rays/ don’t kid yourself/ They’re the start of a coming race.

The “Just as Strange” alternate take is, surprisingly a 2 ½ minute instrumental jam on that LMGB song, with Trucks and the rhythm section and co-composer Doyle Bramhall II on bass.

Another short hornless instrumental, “Satie’s Groove,” rides Tim Lefebvre’s fat and funky bass guitar in a satisfying descending progression that may allude to piece by 18th century French composer Erik Satie, a sort of proto-minimalist. In fact, much of these first five bonus tracks may appeal to those who prefer an unadorned approach. For sure, they provide a little breathing room from the often heart-pulsing intensity of much of the basic Let Me Get By album.

But that also sets us up for the bonus disc’s last three cuts, live performances of TTB with all guns blazing and, on the last song, a great hired gun. These astonishingly potent performances from New York’s Beacon Theater make the deluxe edition worth the extra money, to me (this was no free reviewer’s copy)

By then, late in their odyssey-like 2015 tour, Susan Tedeschi’s voice had become somewhat raw, and here she sounds a lot like another influence, Janis Joplin. Her pained-tiger growl on these tracks conveys as much raw powerful and emotion as any singer working today. That’s especially remarkable because she never tries to stretch beyond her natural contralto range, unlike so many pop-rock-soul singers and would-be American Idol divas, to varying degrees of success.

I described “Laugh About It”  in the LMGB review post and this version has Tedeschi’s voice rough-riding the infectious but tricky guitar figure the song’s built on.

I’m glad they included their cover of “I Pity the Fool,” which I heard them do in Madison during that tour. It’s an old R&B song done memorably by Bobby “Blue” Bland and Paul Butterfield. This song of bitterness and pity — for the fool who falls for with the narrators ex-lover — shows that TTB can get down in the darkest of emotions, despite their generally uplifting music and lifestyle ethos. 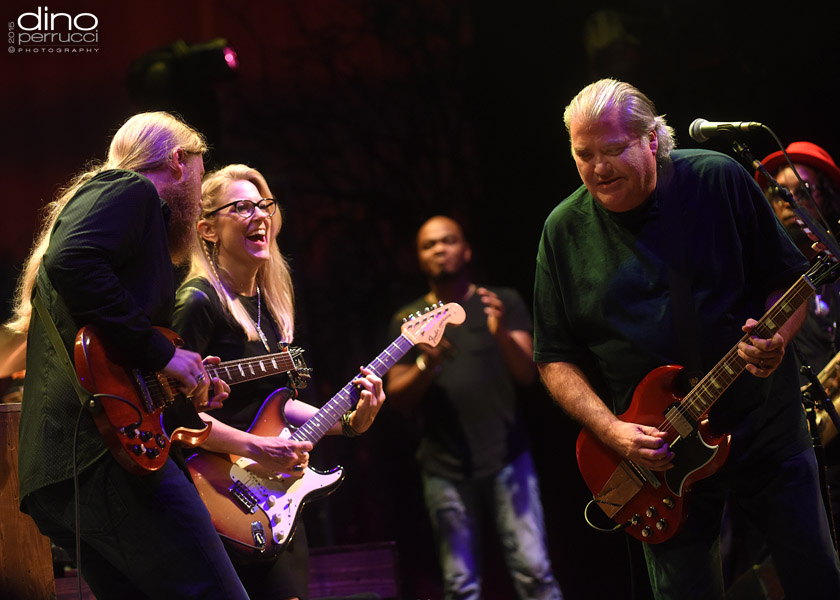 Derek Trucks (left) and David Hidalgo (right) of Los Lobos do some fancy jamming on “Keep on Growing” in this shot from the performance included in the deluxe edition of “Let Me Get By.” Photo by Dino Perrucci photography.blogspot.com.

The last song is another final statement as apt as “In Every Heart” is for the main LMGB album. That song is the exhilarating “Keep on Growing,” by Eric Clapton and Bobby Whitlock, from Derek and the Dominos’ classic Layla album.

Nominal message aside, the nine-plus-minute version really shows them hoisting the Southern jam band aesthetic to a fresh peak. Part of their current tour includes a number of dates with Los Lobos, and in 2015 that band’s superb lead guitarist David Hidalgo teamed up with Trucks on the song’s two-guitar jam, which bristles with riffing fire, contrapuntal wit and invention that compares to the Allman Brothers in their prime (Trucks was, of, course the Allman Brothers’ last lead guitarist). Characteristic of the Allmans’ longer jams, they slow down the tempo at one point, and then end in a whisper, so it becomes almost suite-like (which ultimately hearkens to the formal rock instrumental sense pioneered by Butterfield’s “East-West”).

Amusingly, from a video of the song performance, it’s evident that Hidalgo knew not much more than the song’s chord changes. And when he stepped to a mike to sing a few lyrics he’d picked up from the first chorus, Tedeschi turned and began mouthing lyrics to him, because who wouldn’t want Hildalgo’s marvelous tenor singing harmony? That is only partially successful, however when the two guitarists jam, Hidalgo’s eyes stay riveted on Trucks’ fretboard, and it works splendidly, a fine example of courageously performing on the fly. 2

I hope something like this happens when I see Los Lobos and Tedesci Trucks Band on the same concert bill this summer.

I’m not sure why Susan Tedeschi doesn’t try such improvisational interplay with her husband at times. She can play the rhythm guitar of a groove like the aforementioned, but perhaps she’s never done much plecteral jamming. Although hardly in Derek’s league technically, she’s a gritty blues guitar soloist, as she shows on “I Pity the Fool.”

The deluxe set also includes lots of cool pix and a brief insider comment on the bonus-disc selections by the band’s resident scribe Mike Mattison.