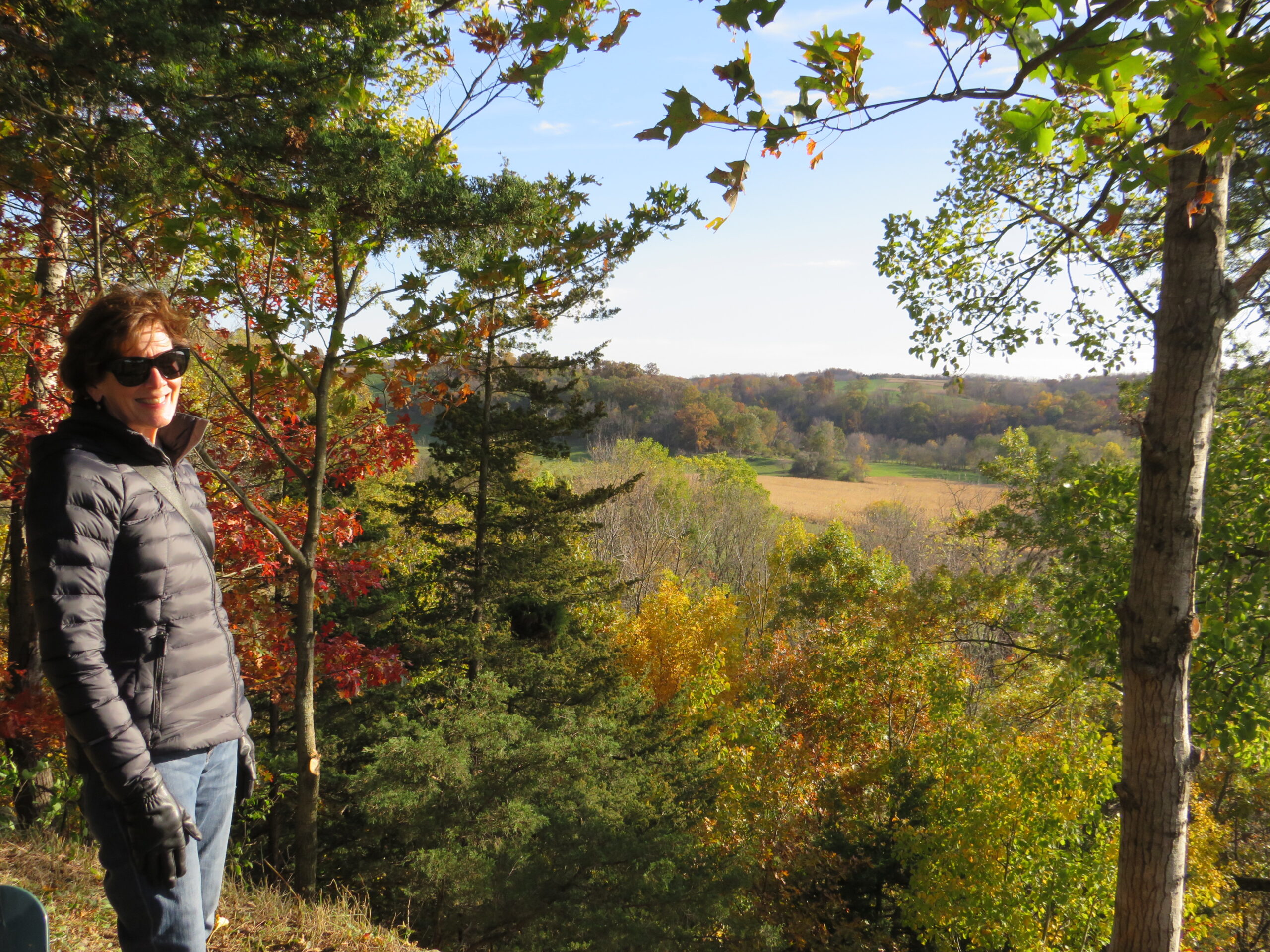 Traveling companion Ann Peterson takes in the gloriously expansive vista from the property of Dodgeville artist Lauren Thuli. All Photos by Kevin Lynch, except as noted.

MINERAL POINT — Our car wended over and under the undulating curves of the Driftless region of Southwestern Wisconsin as we began the adventure of searching out artists studios nestled in picturesque nooks of the landscape. The term “driftless” murmurs ancient mystery and geological fact: a region virtually untouched by flattening glaciers during The Ice Age. The region also lacks the characteristic glacial deposits known as drift.

Ann Peterson and I had embarked on this season’s Fall Art Tour, the first time I had partaken in this since moving from Madison back to Wisconsin’s East Coast over a decade ago. 1

SATURDAY, AROUND DODGEVILLE AND IN MINERAL POINT

What a rewarding choice. Our very first stop reaffirmed the hoary adage that the greatest artist of all is Mother Nature. Not yet having my camera cued up, I can’t do justice to the two artists sharing the studio space of this first stop, Lauren Thuli and her brother James Koconis, two friendly artists adept at degrees of abstraction in oil painting. Lauren was especially accommodating, demonstrating to us how she blends beeswax and oil paint to get the particular tonal and textural effects that distinguish her abstract impressionist style.

But the key to this visit’s experiential climax was a sign outside their rural Dodgeville studio, shaped in an arrow, adorned with the words “spectacular view.” Down a slight slope several Adirondack chairs stand near the edge of an outcrop. When we walk to that edge, half of this part of the world seems to unfold expansively before our eyes, a stereo-visual effect, like the Biblical Red Sea parting before us. The land flows across our eyes in breathtakingly sumptuous waves, bursting with greenery turning golden. It allows us to feast on the magnitude of autumn glory in a full 180° spectrum. These first three photos (above and below) attempt to capture that in (left to right) sequence. 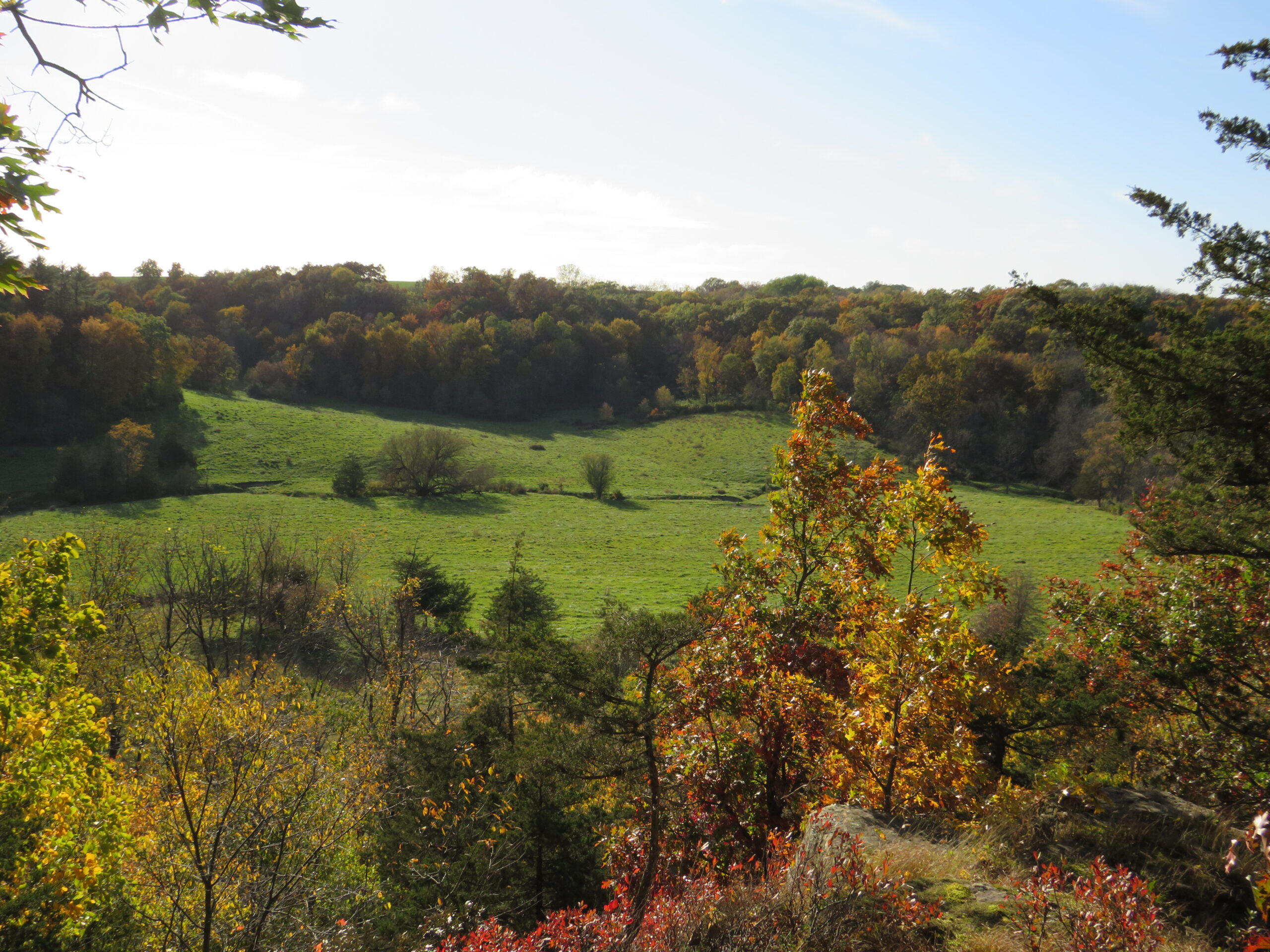 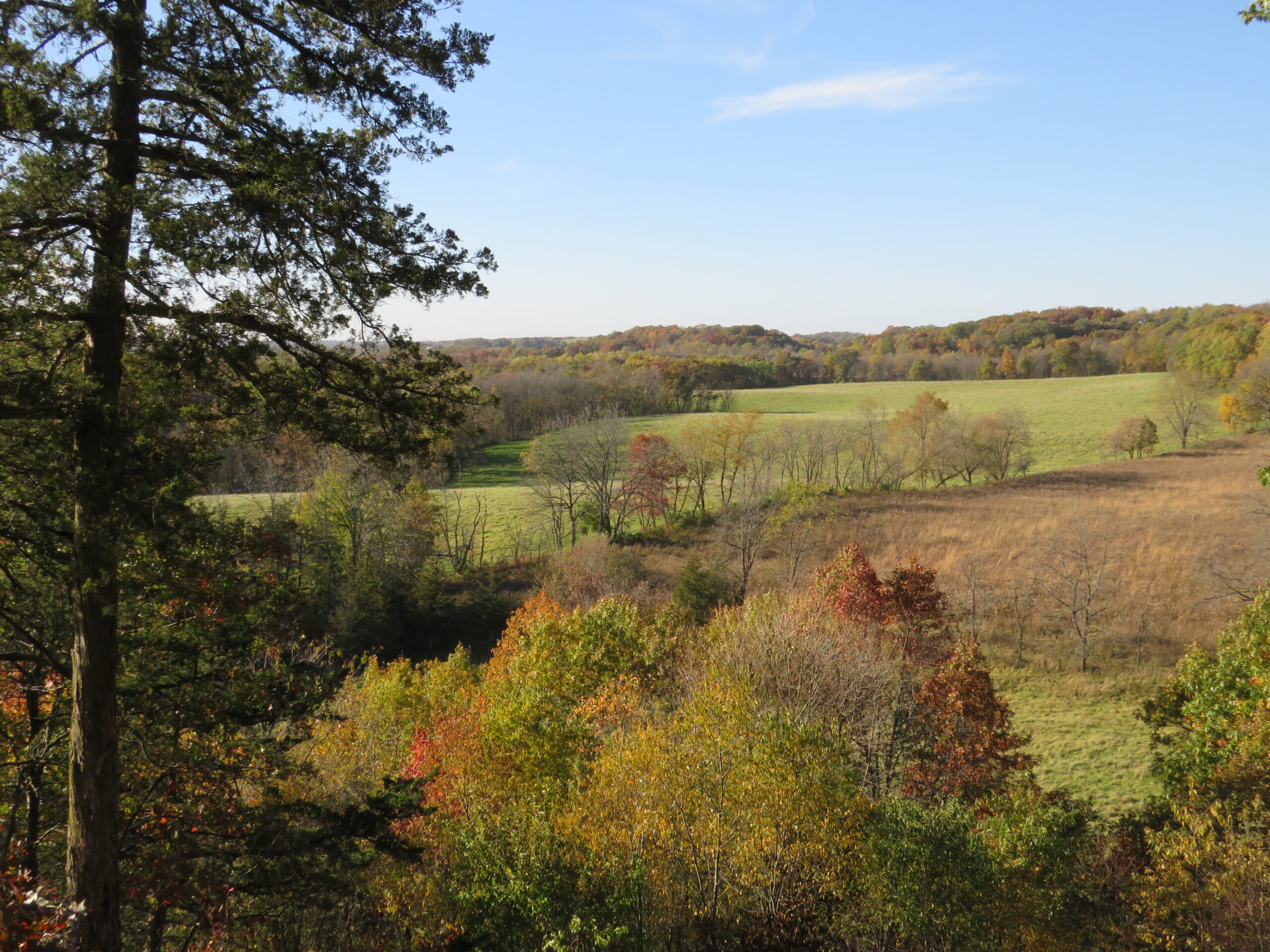 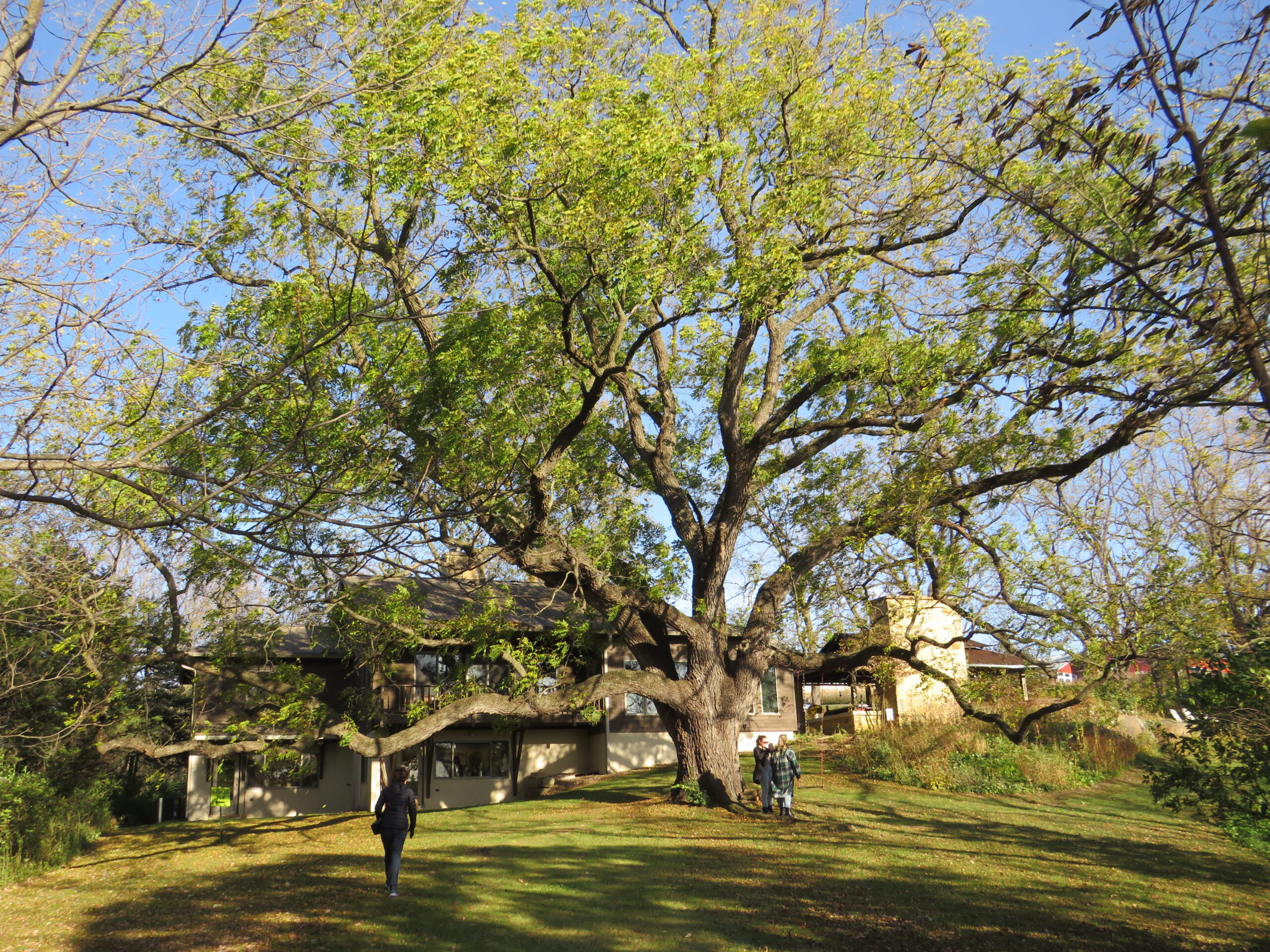 This seemingly ageless tree on the property near the previous vista location, typifies the abundance of amazingly mature, sometimes gigantic, old trees in the Driftless region. Note the width of this trunk by seeing the people standing beside it.

We were struck by the maturity of the trees in the region, and the buildings, for that matter. The Art Tour is a bit like taking a Time Machine travel back to the 19th century, when so many of Mineral Point buildings were erected. The town was was settled in 1822 by Cornish miners, a couple decades before Wisconsin achieved statehood. It’s among the oldest towns in the state.

Yet the time machine analogy only goes so far, as most of the artists are clearly 20th- and 21st century-style and beyond. 2 The most vivid example of the latter, among those we visited, is John Walte, in Dodgeville.

Entering his studio I spied a realistic image across the room and said, “Is that Edgar Allan Poe?”

“Yes, that’s Poe but that’s NOT my artwork!” a disembodied voice called out. The image was a reproduction poster which The Voice seemingly likes for the tragic drama of Poe’s life and the spectral magic of his writing. The Voice wasn’t the Wizard of Oz, it was somebody a bit wizardly but much smarter than that lovable but bumbling movie character. He was digital artist John Walte, hidden in an alcove created largely by computer towers and terminals.

When I found him and expressed interest in his digital art, Walte’s eyes lit up like a wired video-game demon, and he launched into a mind-bending discussion of how such artwork plays out as an inquiry into perception, cognition, illusion and physics. That hardly does justice to Walte’s heady soliloquy (with a few nudges from me) but I wasn’t taking any notes on this trip, nor recording anything aside from photos, for this photo essay.

His partner, painter Pamela Callahan, has un upstairs studio that I enjoyed in slightly different terms. Some of her work reminded me of a more lyrical, colorful, gestural abstraction of Philip Guston’s primitivist late style. But this is a photo essay so I’m minimizing my commentary… 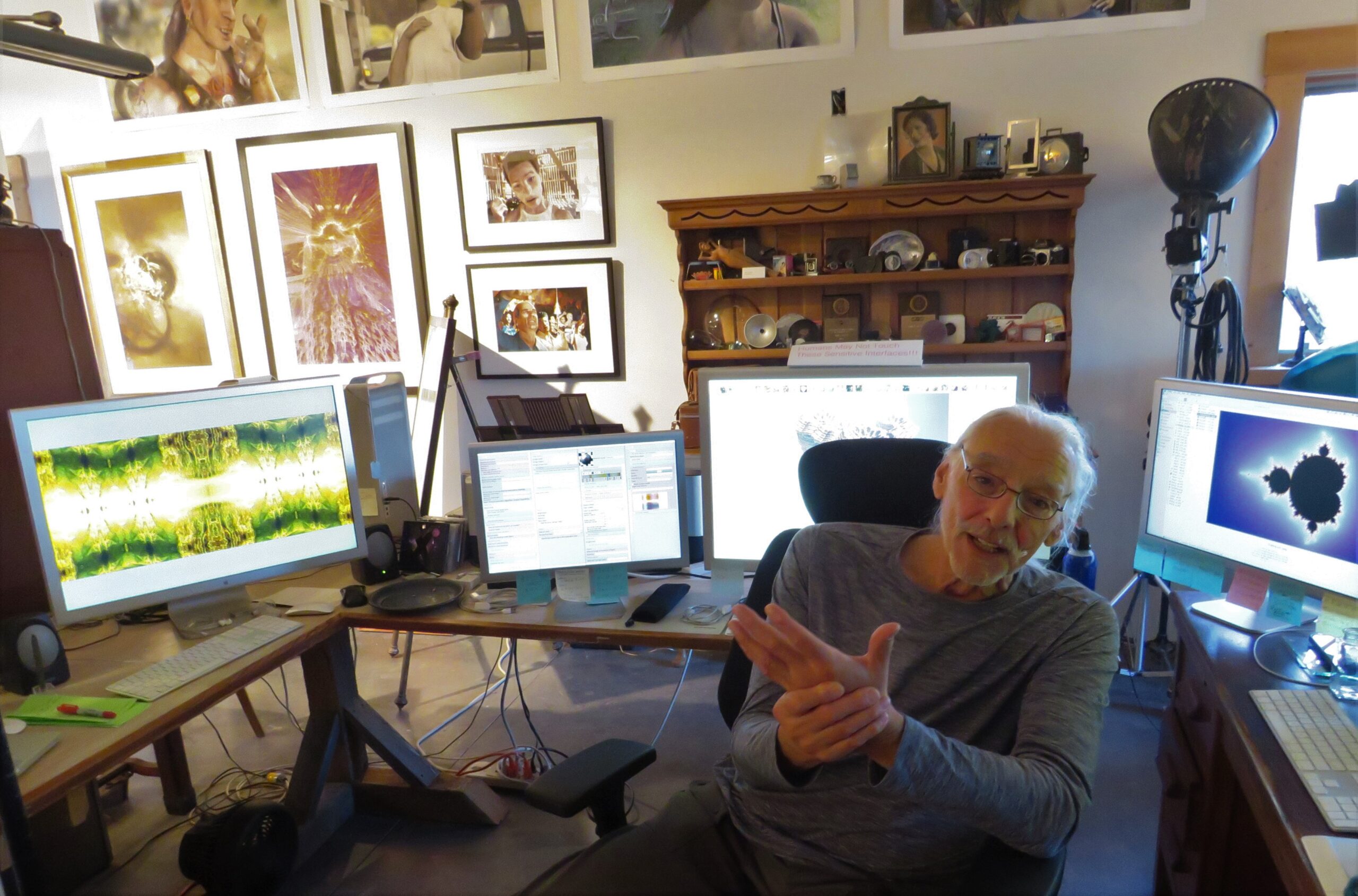 John F. Walte is a brilliant, scientifically-gifted artist who specializes in cutting-edge digital art. And at a drop of a hat, he’ll tell you all about the abstruse theories and realities underlying his creative exploration. 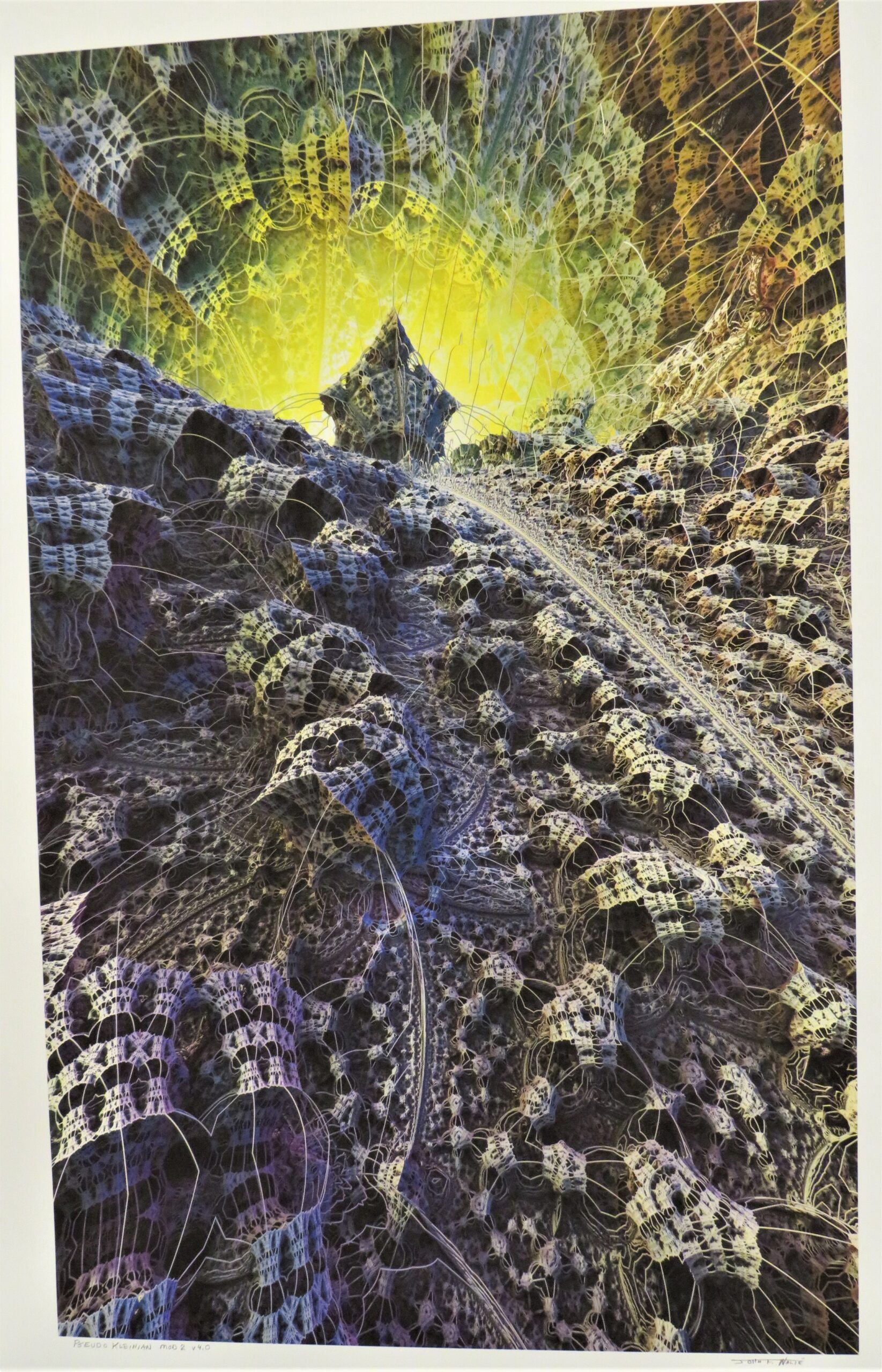 Apologies for this crooked photo of a John Walte digital artwork. But that angle sort of accentuates the mind-bending, trippiness of his digital dreamscapes and futuristic auras. This piece is titled “Pseudo Kleinian Mod 2  v 4.0.” Put that in your pipe and smoke it. 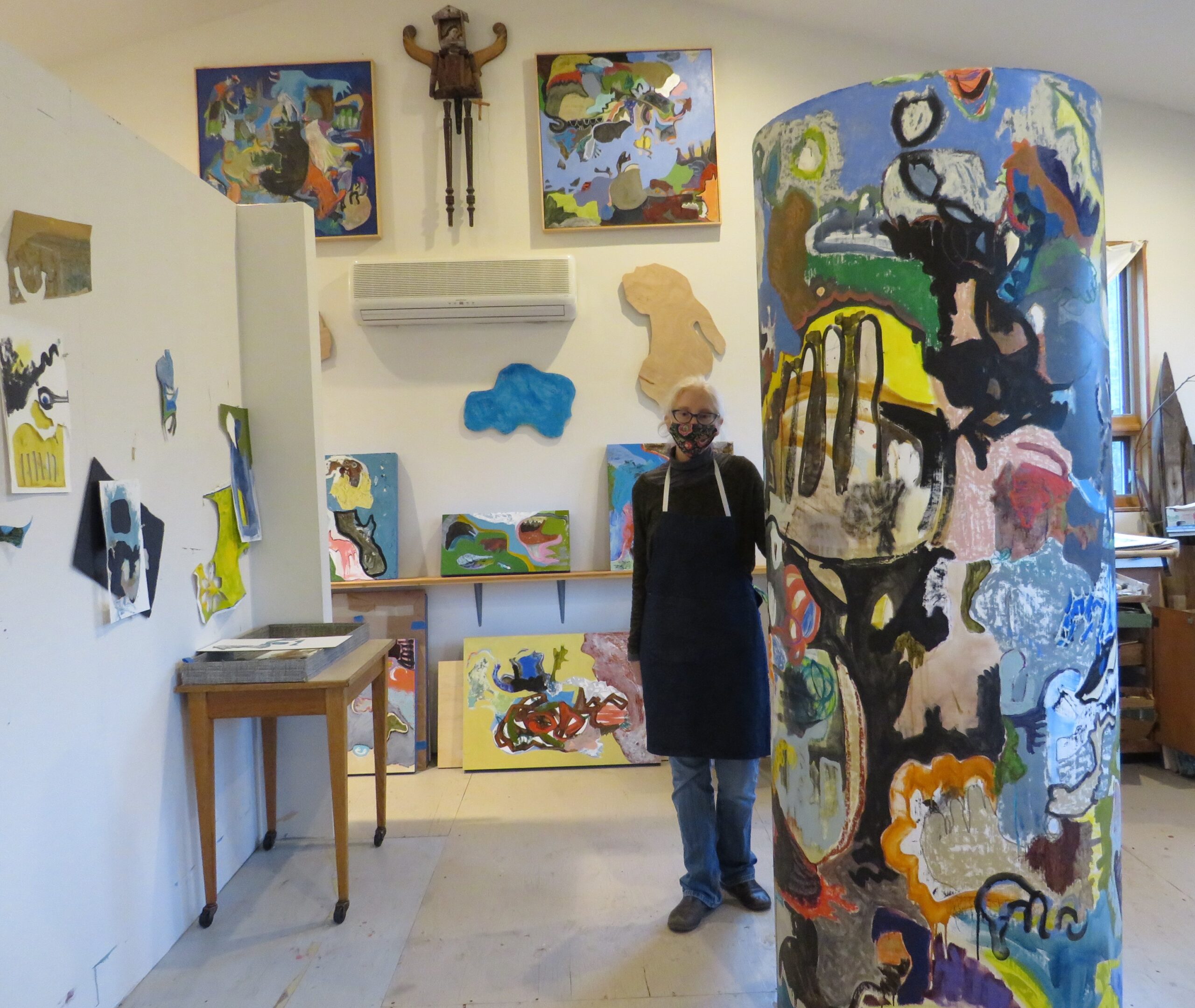 Pamela Callahan in her studio with her 360-degree painting column. 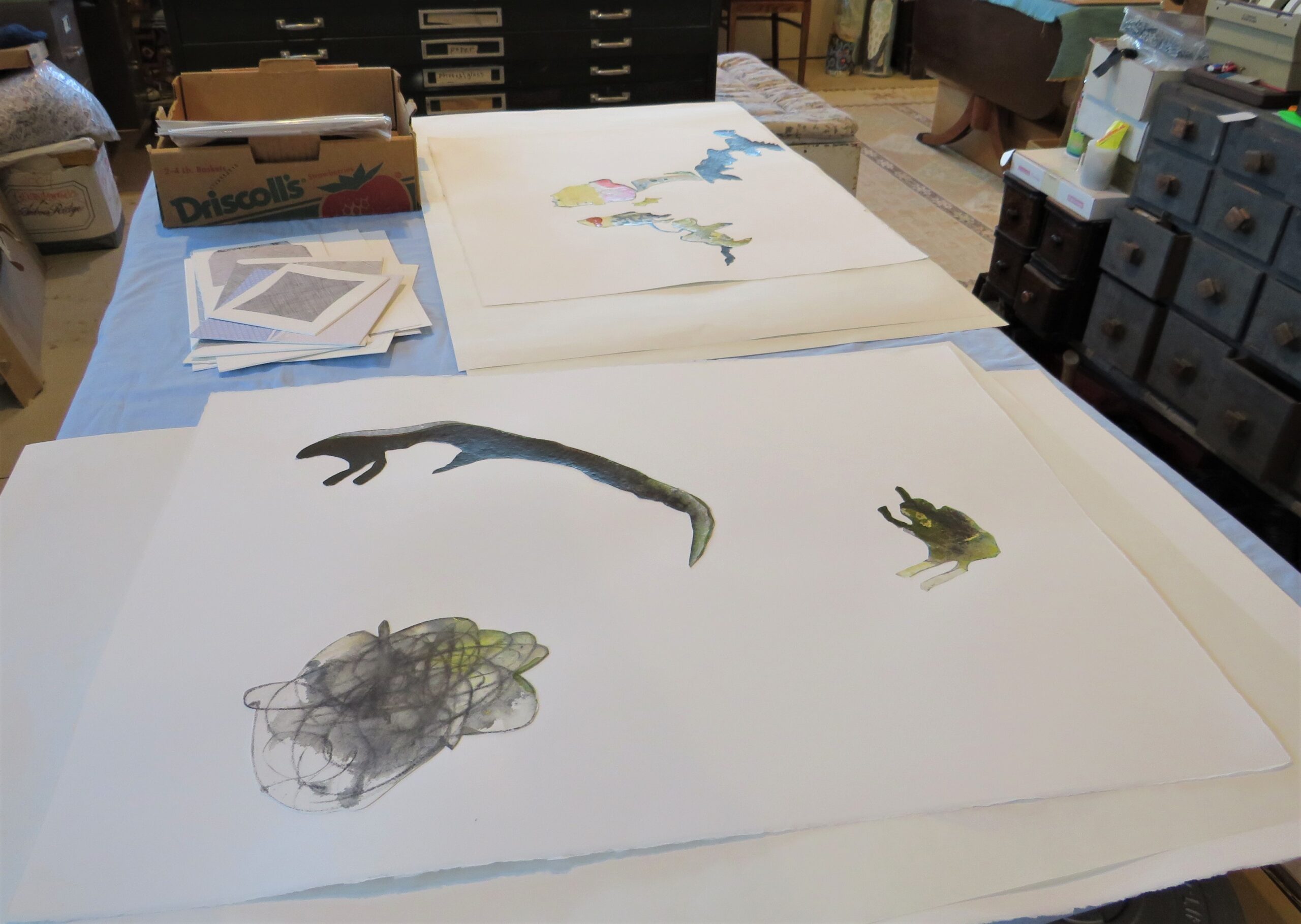 Three motifs of a new Pamela Callahan painting in genesis. 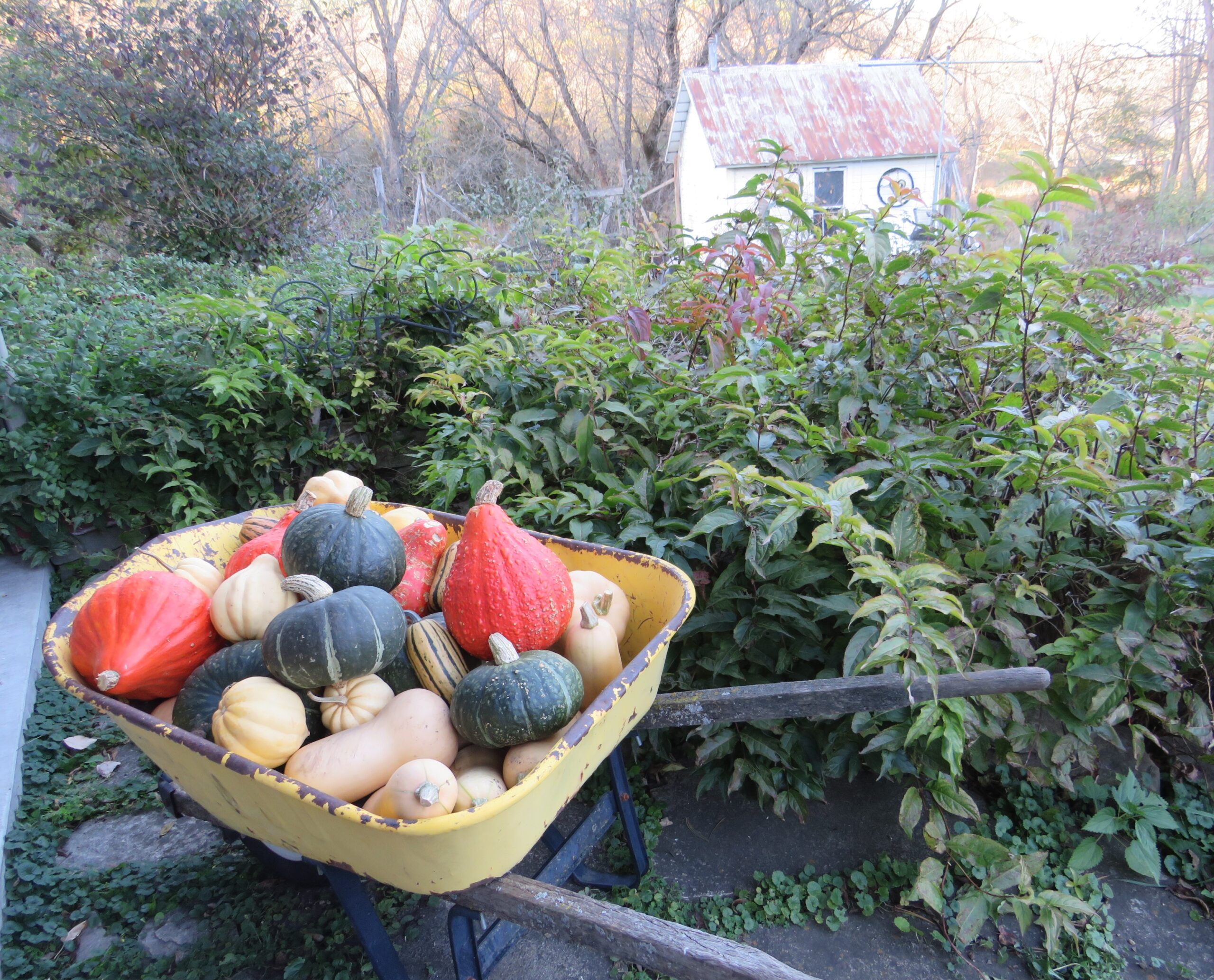 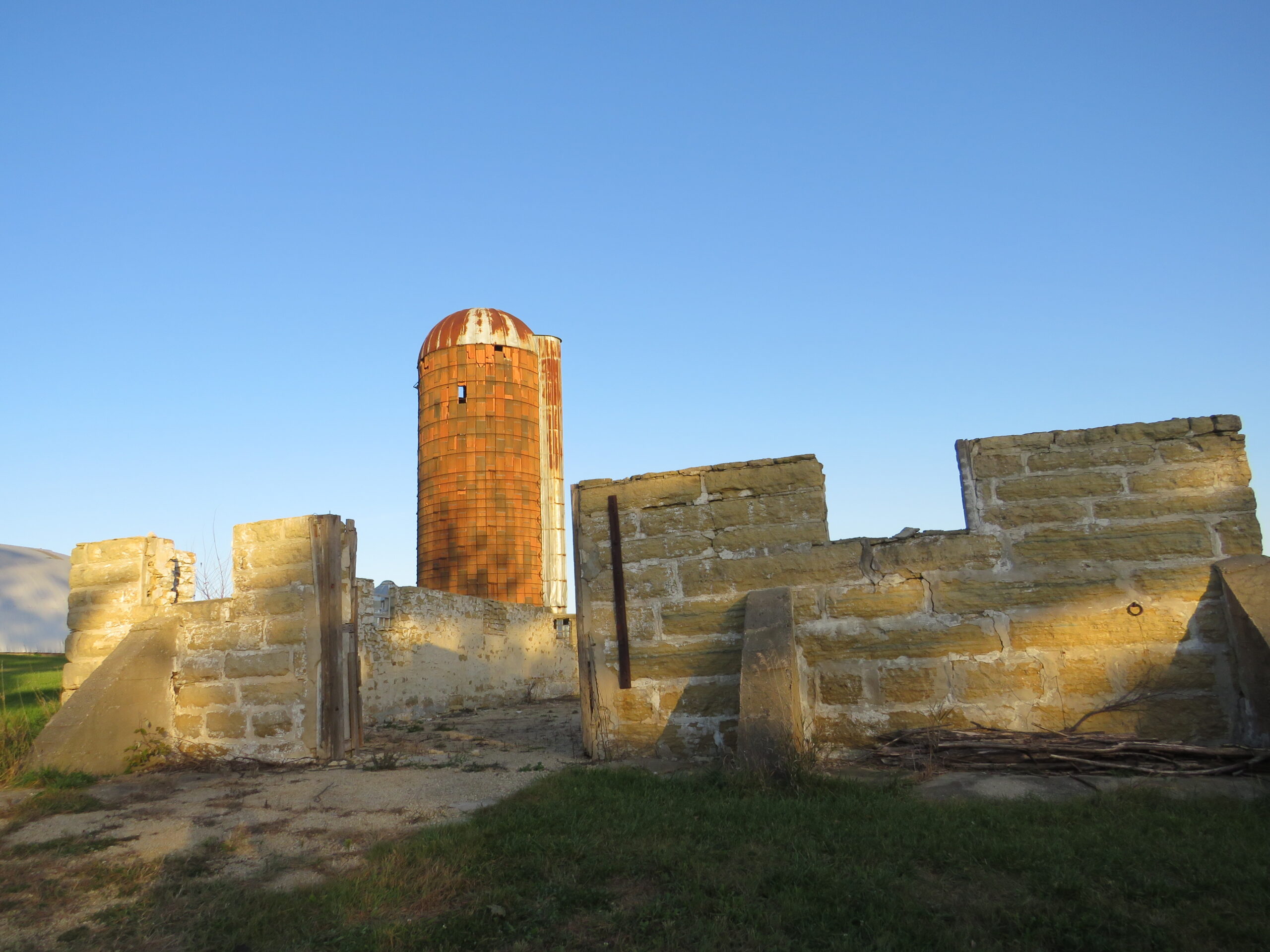 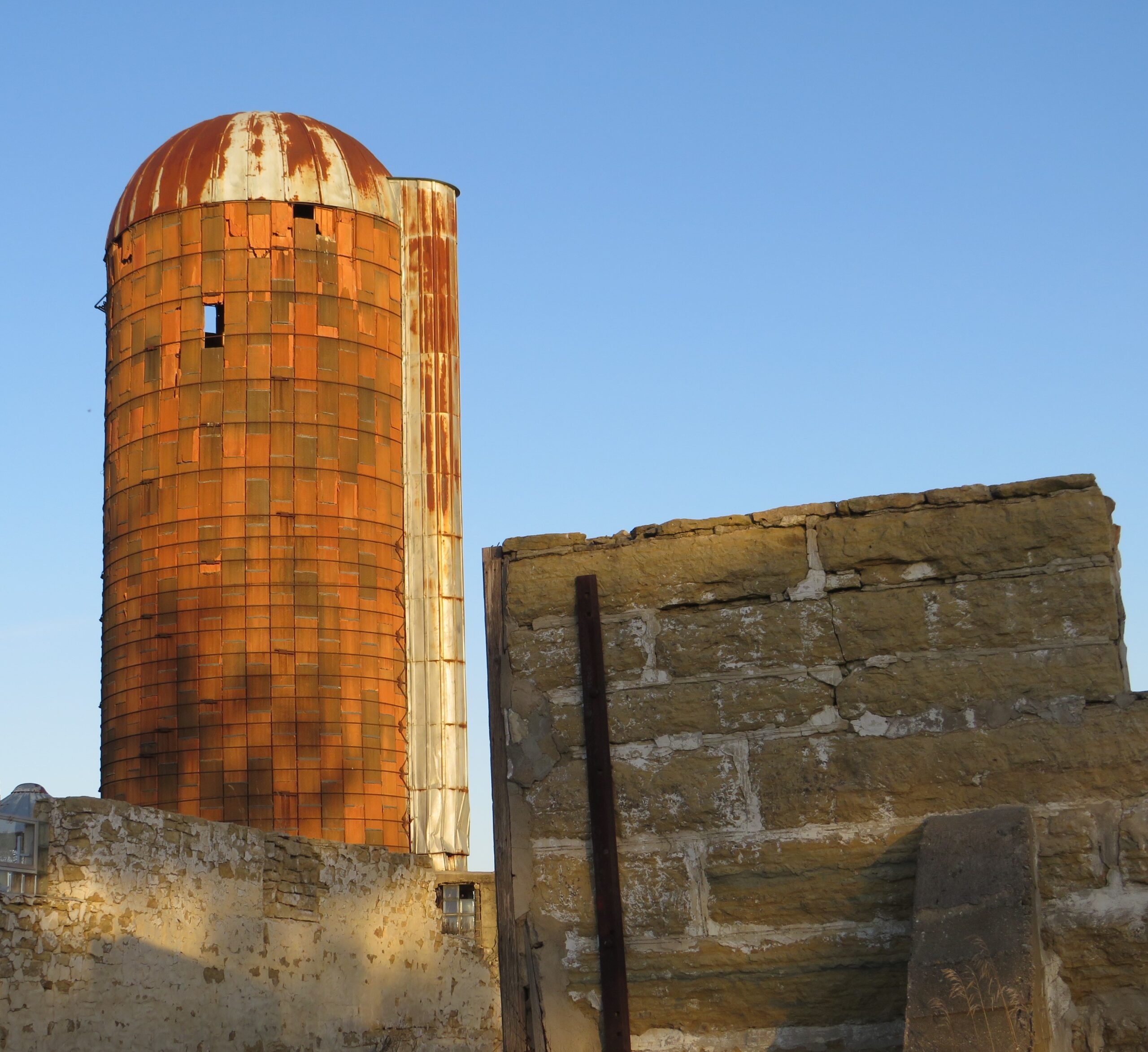 A hint of Stonehenge in the ruins of an ancient stone granary built in 1876 on the property of ceramicist Carol Naughton in Dodgeville. 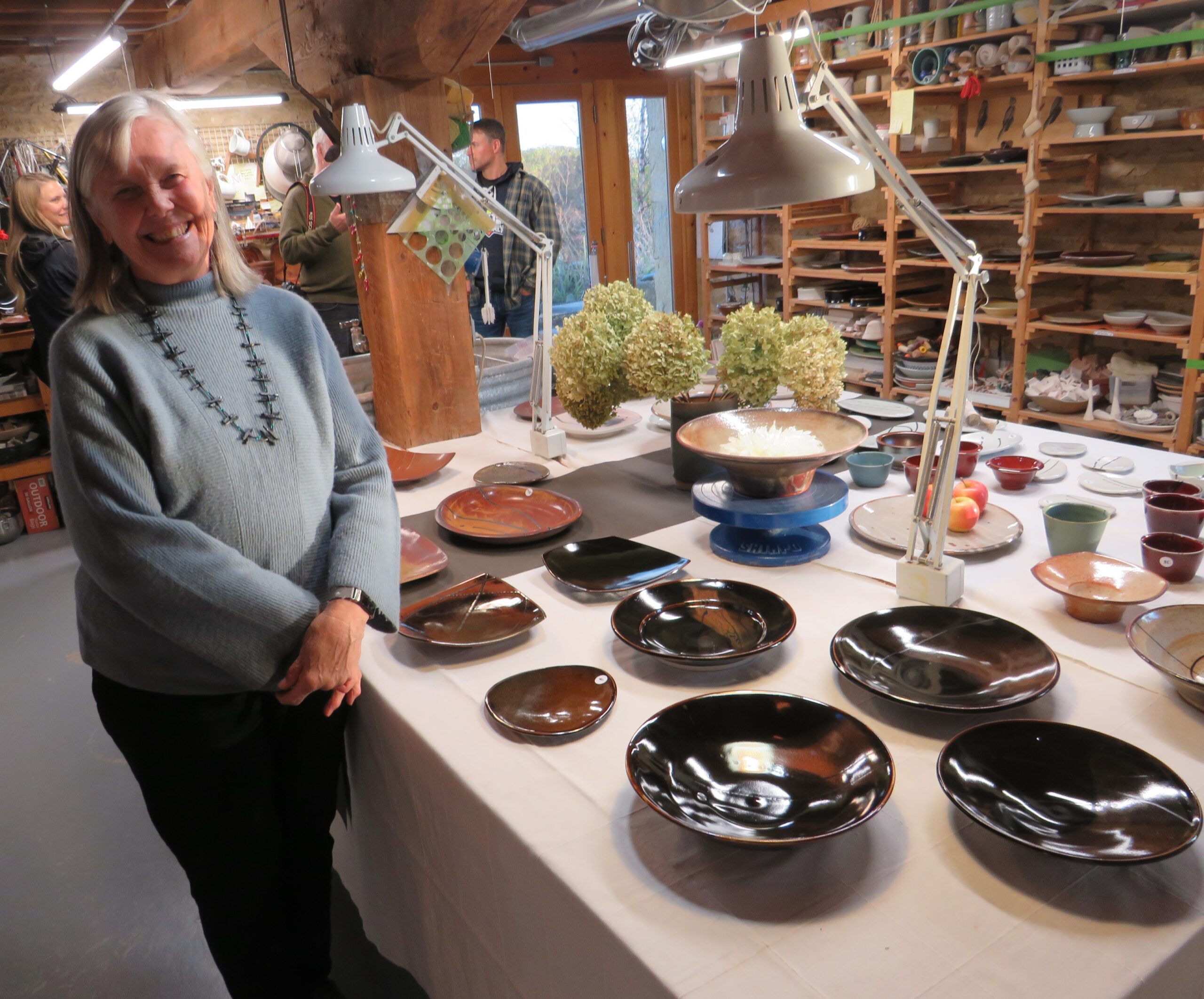 Ceramic artist Carol Naughton in her studio display area. I purchased the fourth plate from the right, on the table beside Carol (see also below). 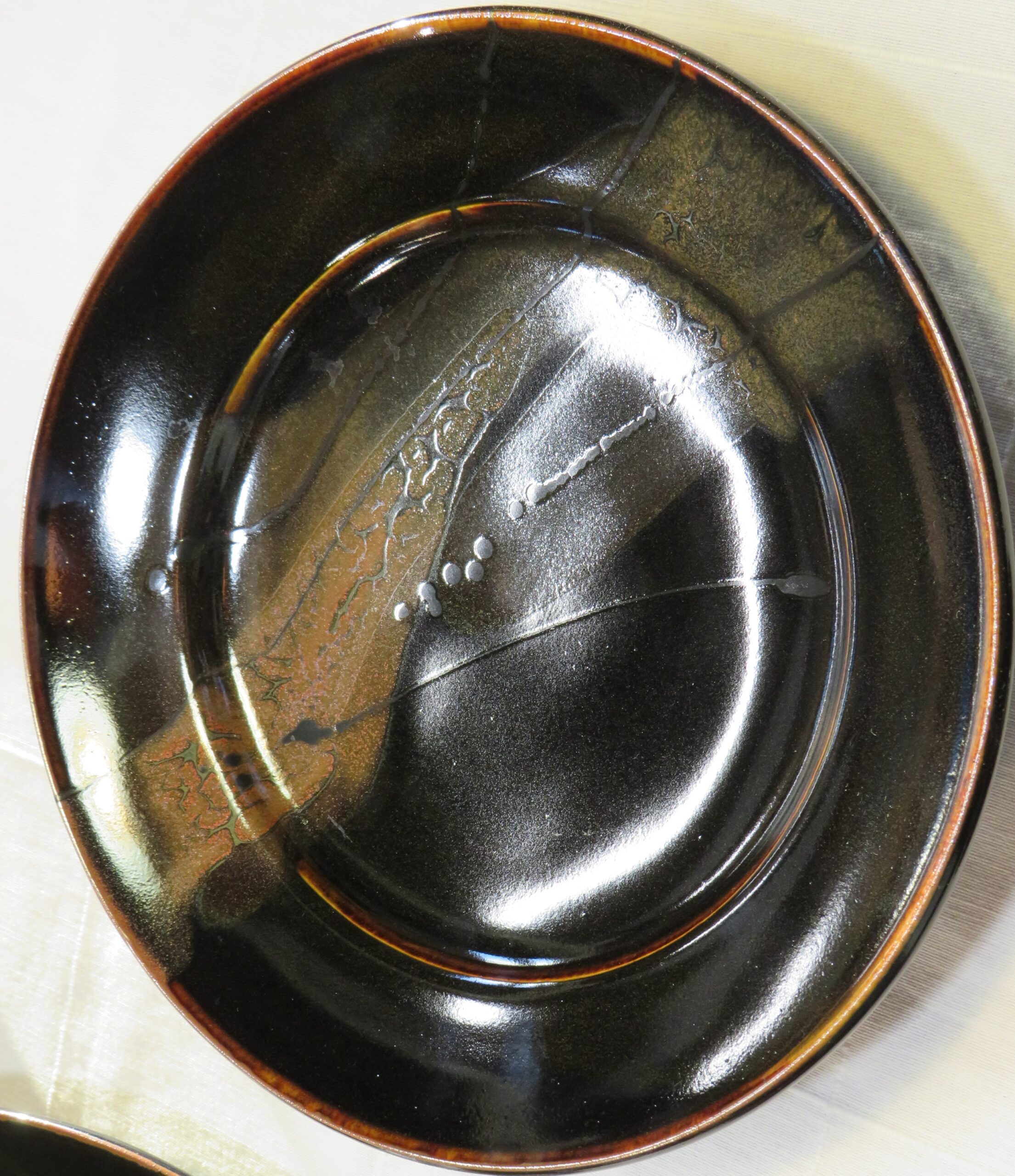 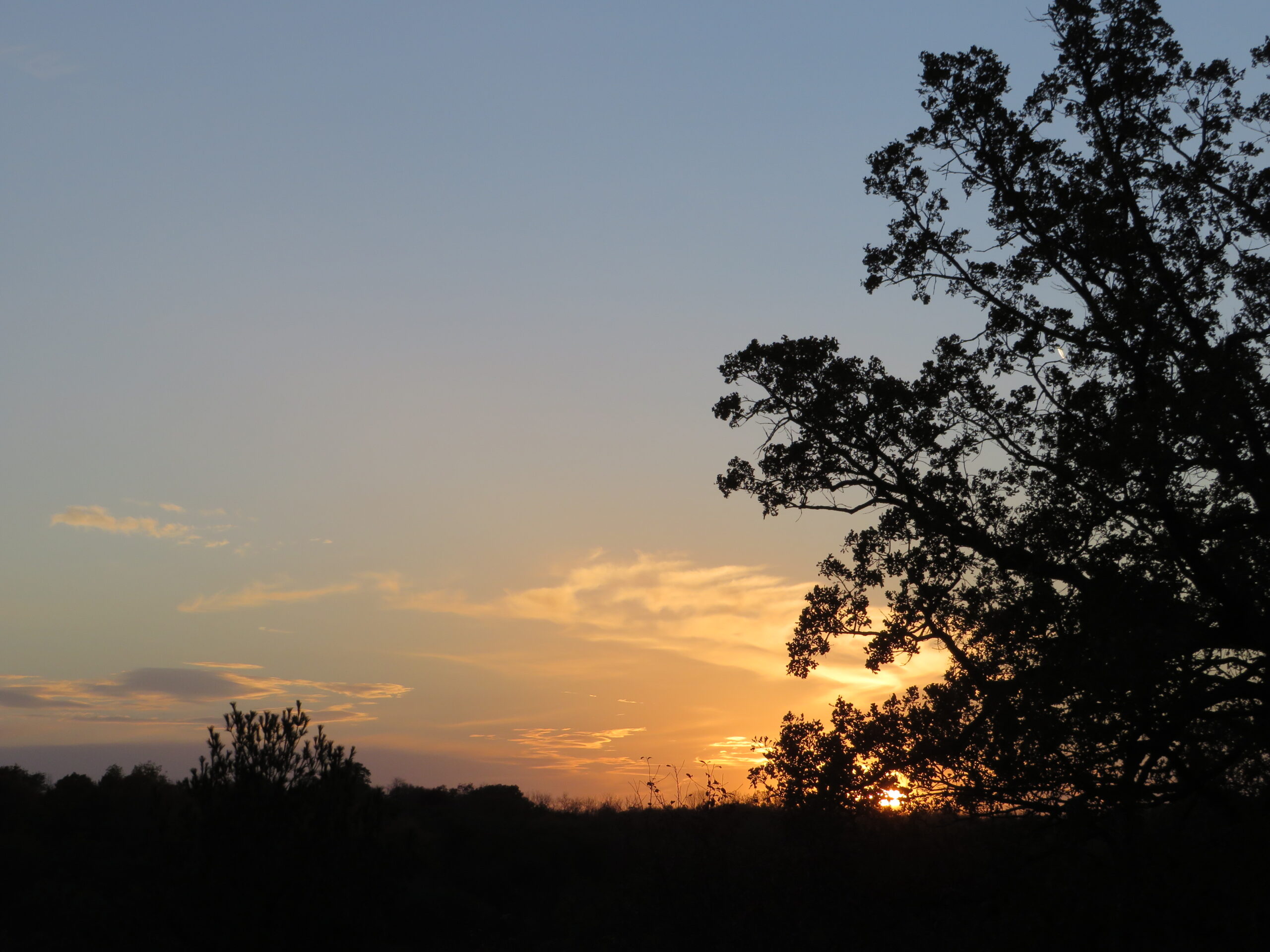 The sun sets on our first day of the Fall Arts Tour, outside the Carol Naughton studio, near Dodgeville.

The barn ruins at the Naughton Studio set the clock backwards again and having returned to Mineral Point for the evening, time seemed to reverse itself again. Among many buildings in Mineral Point that have survived generations since the 19th century is the repurposed Mineral Point Hotel, where we stayed. The hotel owners have transformed it into a wonderfully eclectic blend of Victorian, art-deco and French decor. Ann called it her favorite hotel, ever. (See photos below) Then walking back to the hotel, from our Italian dinner at Popolo, a nearby restaurant, she declared this “the most romantic trip we’ve ever taken.” OK, we’ve never been to Europe. But no doubt, there’s something magical about the Fall Art Tour in Southwest Wisconsin. 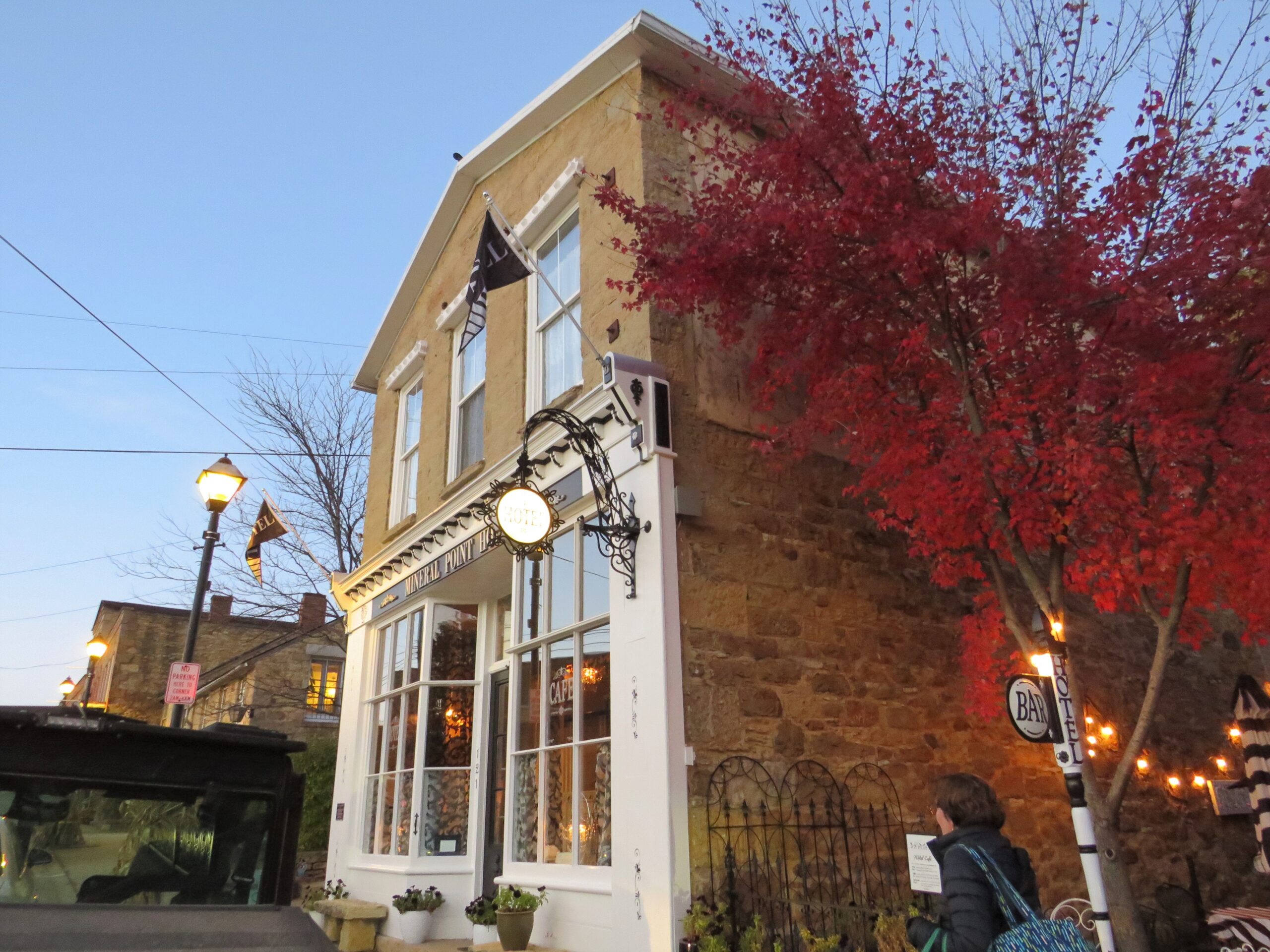 The Mineral Point Hotel where we stayed, is utterly charming, even transporting. 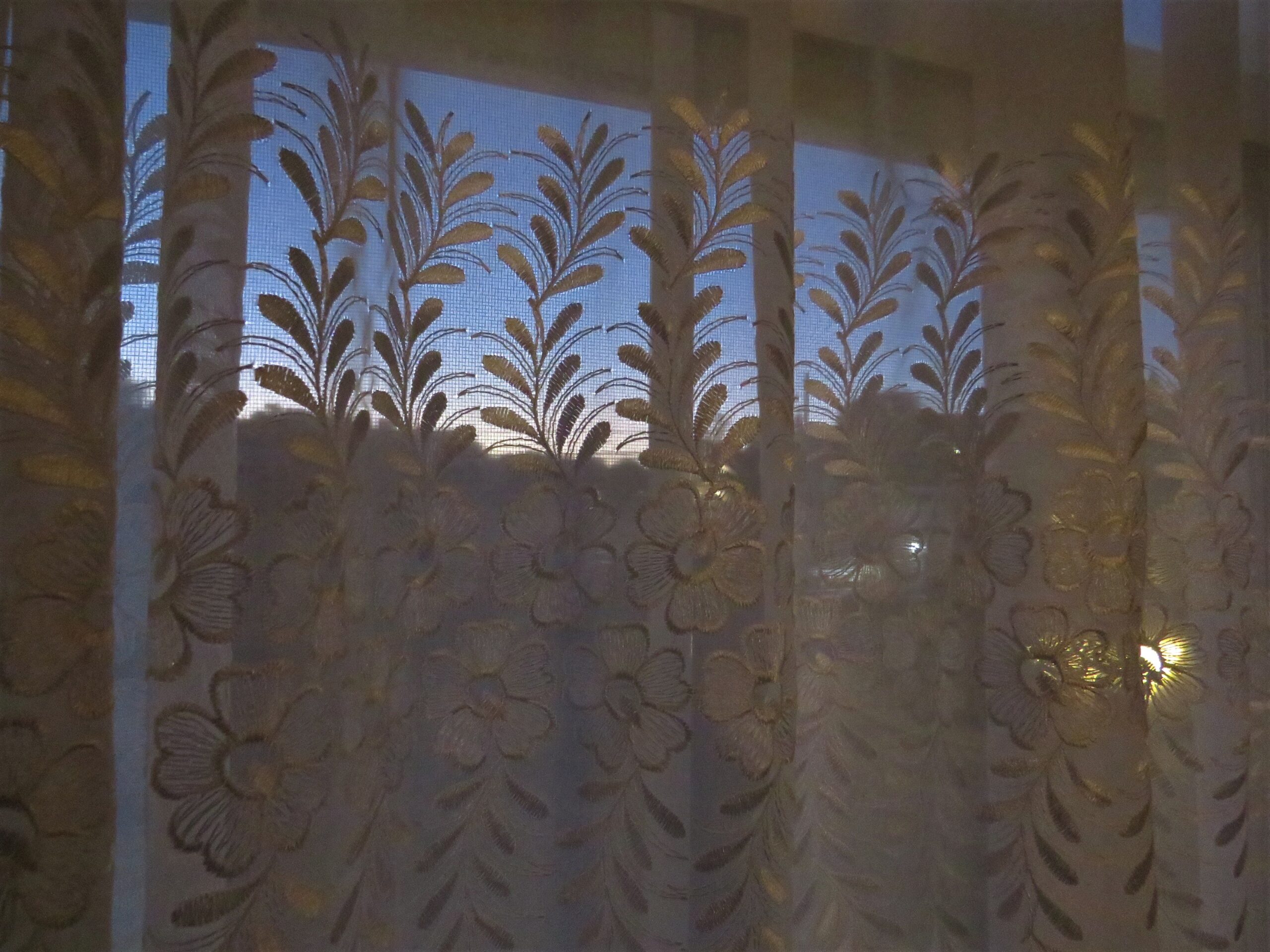 A view of dusk through a window in our room at The Mineral Point Hotel. 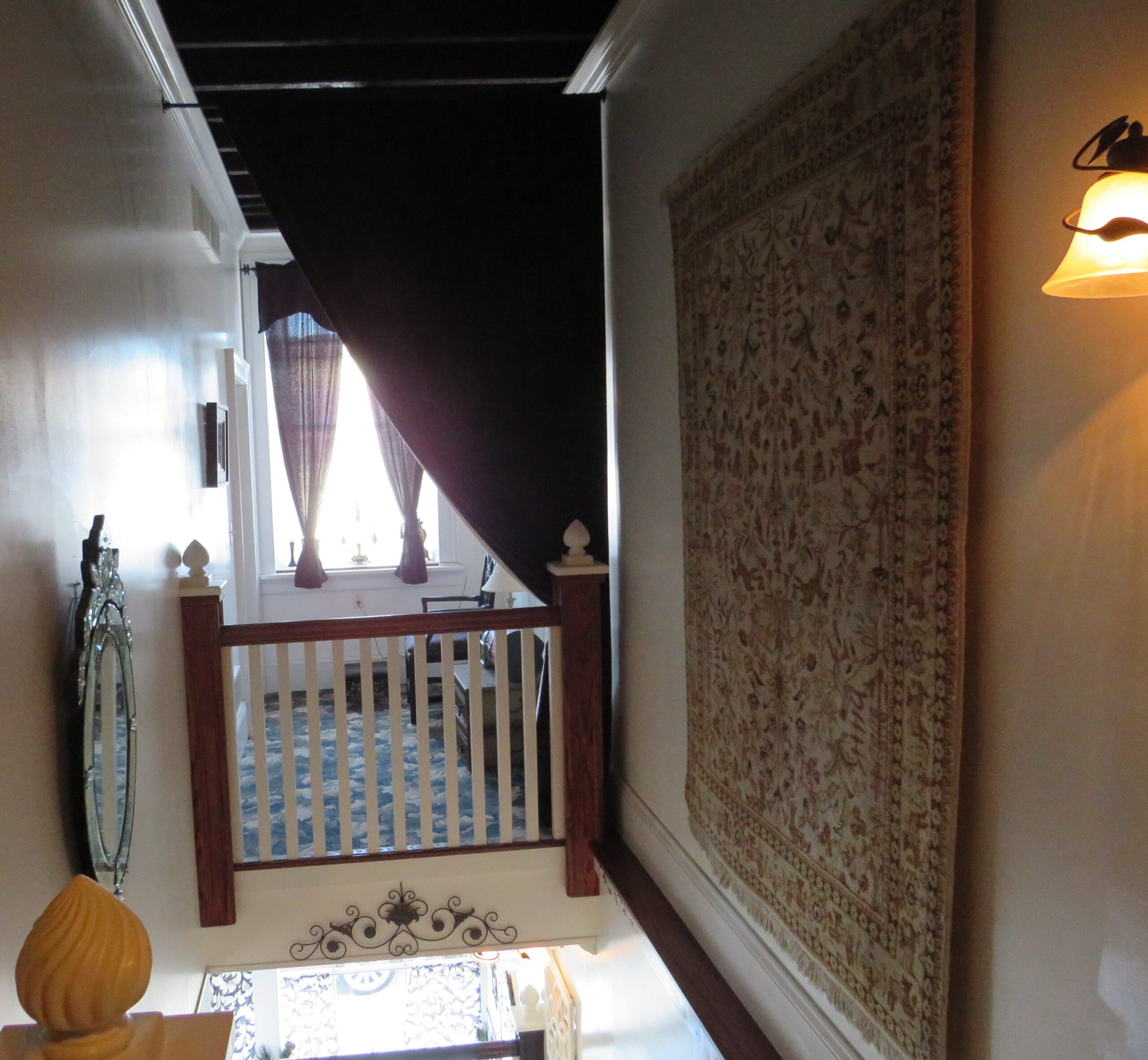 A feature of our Mineral Point Hotel room was this small attached balcony, elegantly overlooking the street and the staircase inside. I spent some sleepless time reading in the balcony Saturday night. Among the balcony’s details were four oversize black ceramic chess pieces on the deep window ledge. 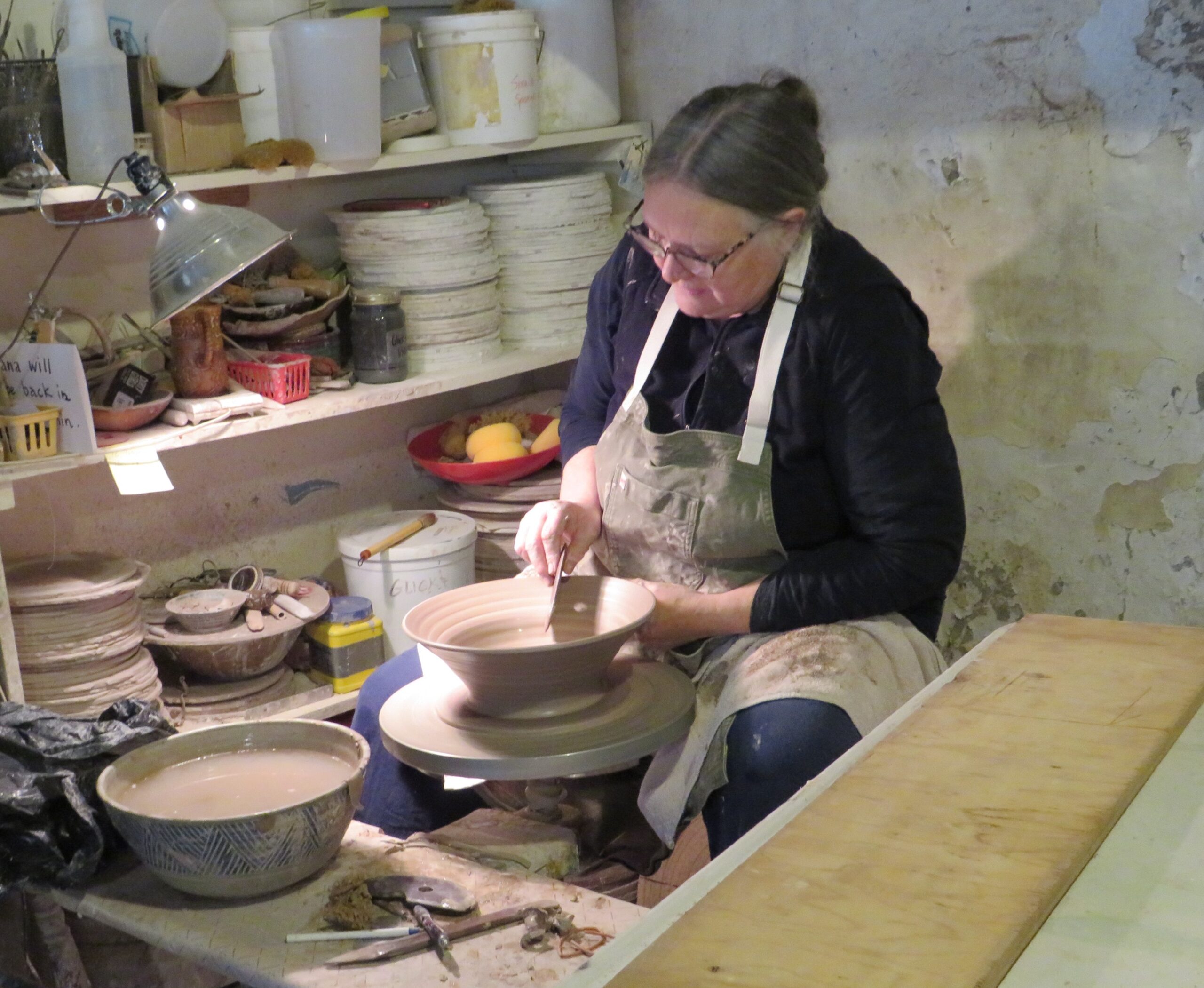 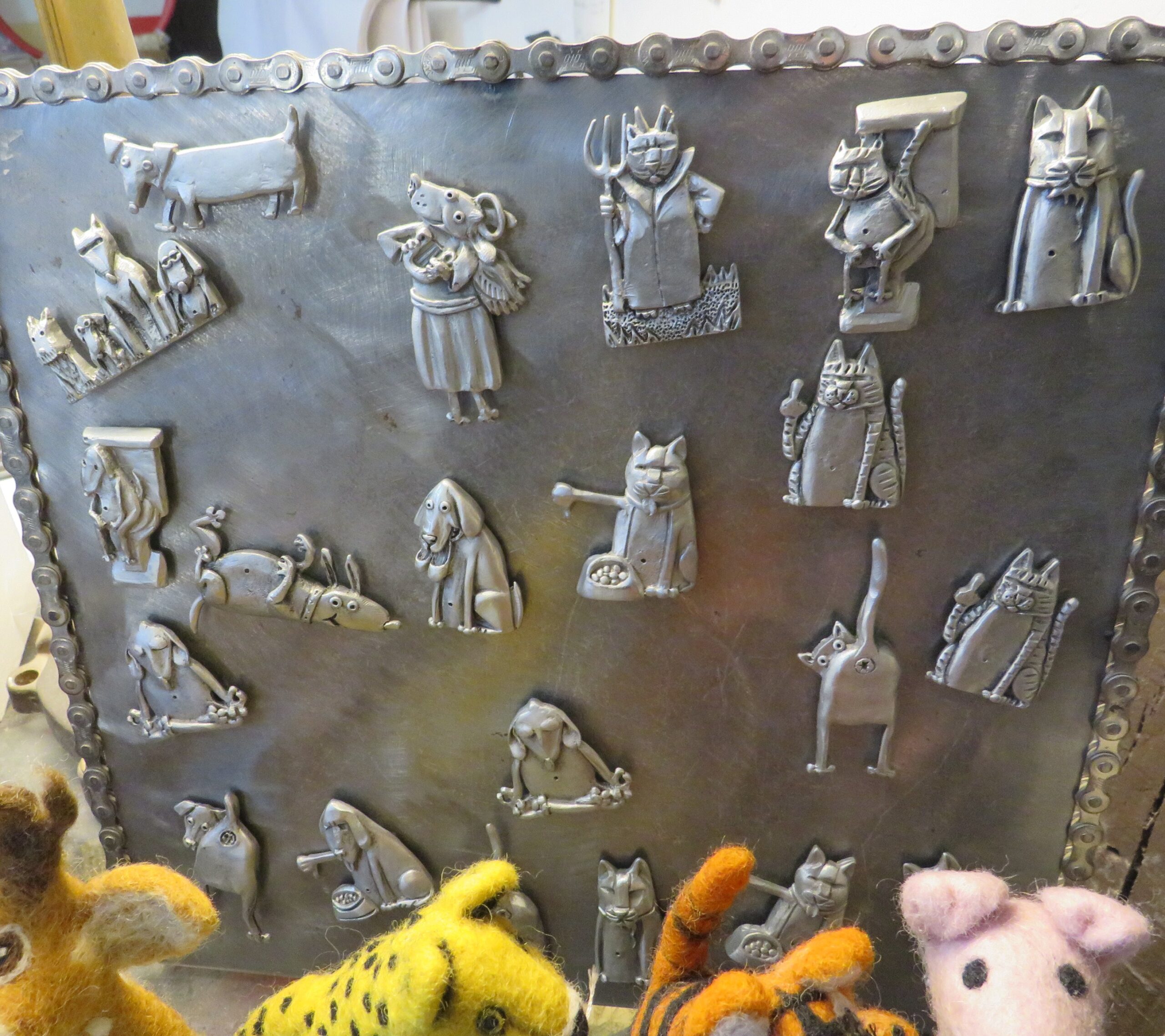 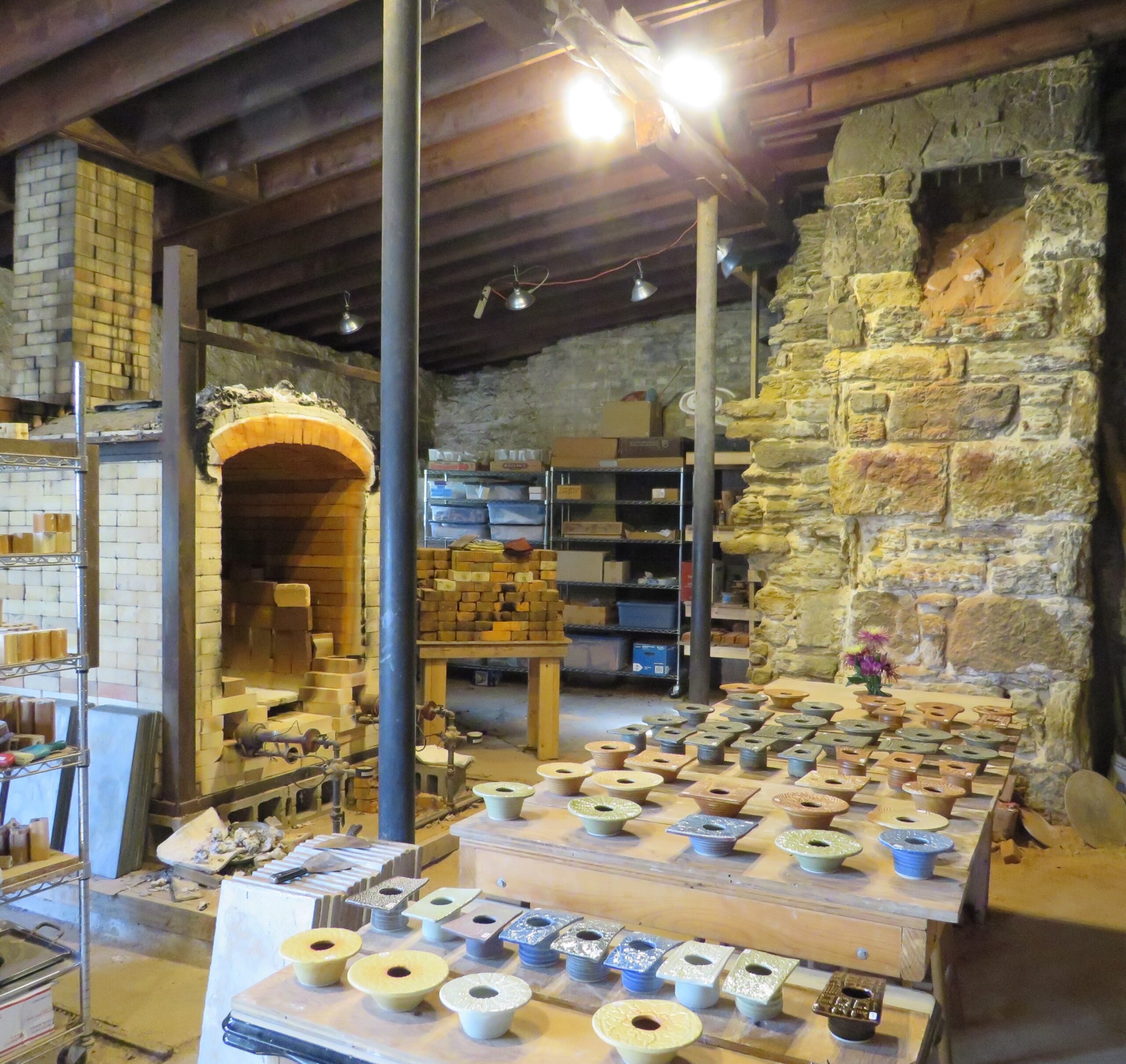 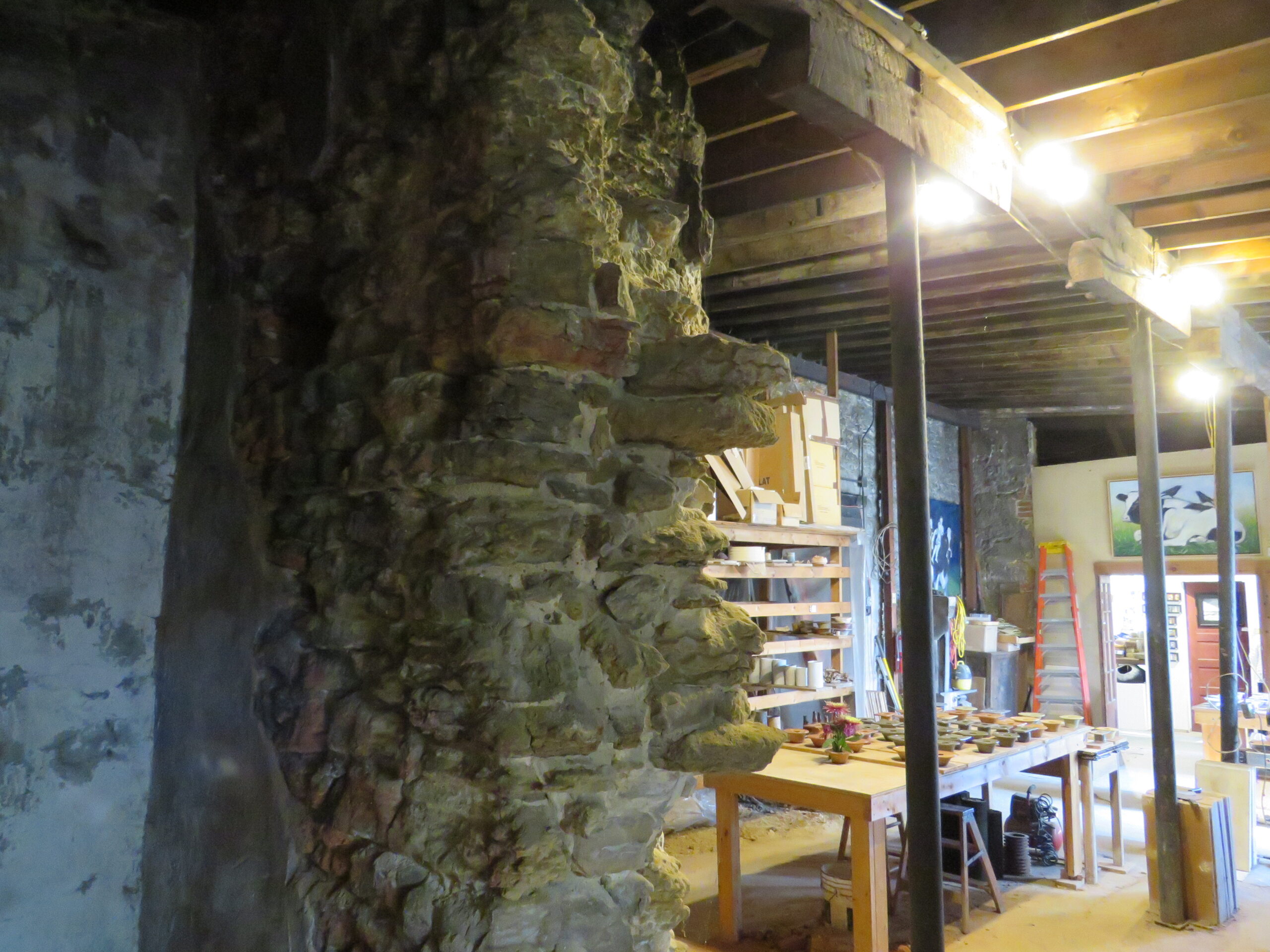 Built in 1850, the original Mineral Point brewery building was hit by a tornado in 1878. That may account for this exposed brickwork in the back of Brewery Pottery’s current kiln and firing room, in background (reverse view of previous photo). 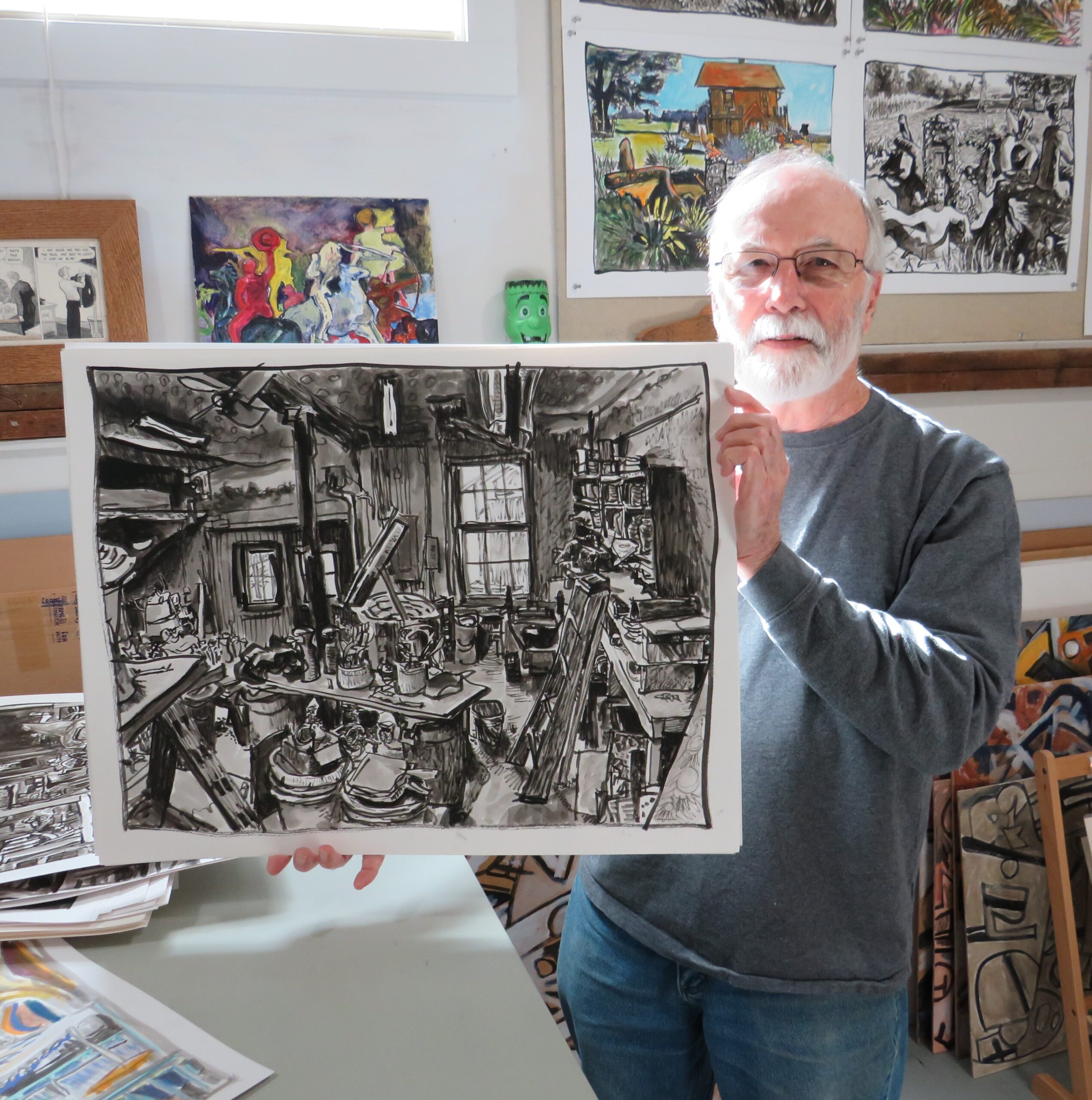 Tucked away in a quiet Mineral Point neighborhood is humble, affable but gifted artist Clyde Paton. Here he displays his India ink rendering of the studio of the noted Mineral Point ceramic sculptor Bruce Howdle, who died a few years ago.
Clyde Paton prompted a brief search on Howdle’s online legacy. His work often grew to epic scale relief murals.
I recall him from my last Fall Art Tour trip here, too long ago, so I end with another quick “Time Machine” reverse gear to honor that artist.
Though his Bruce Howdle Studios Facebook page still lists 1K followers, I’m uncertain if Howdle’s studios are still open in any capacity. 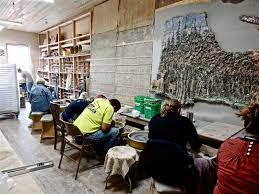 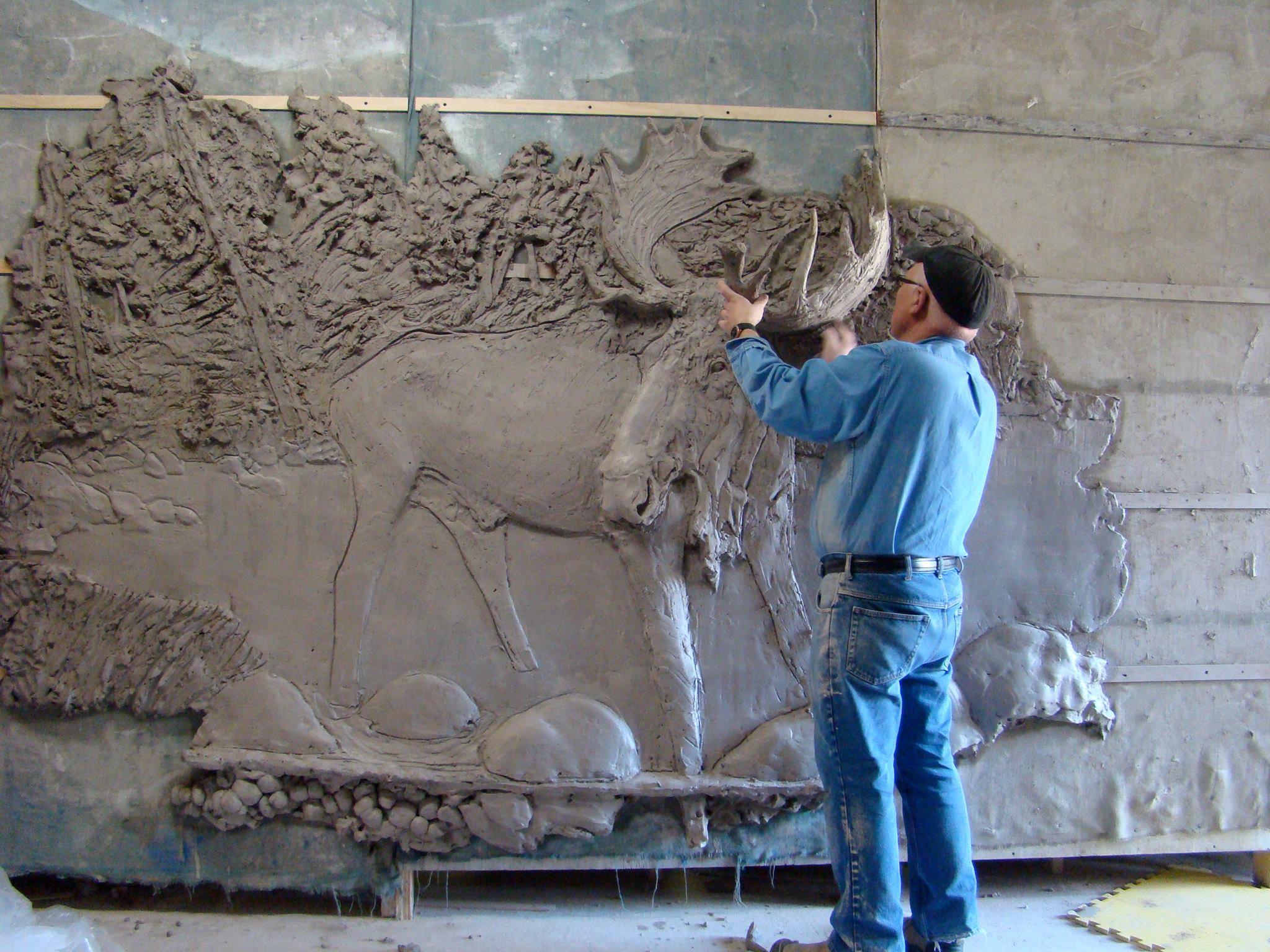 The late Bruce Howdle working on one of his ceramic murals. His Mineral Point studios also offered pottery throwing classes (with part of a Howdle mural visible in upper part of that photo.(above). Photos courtesy Bruce Howdle Studios.
________
1 The annual October art tour encompasses four nearby towns — Mineral Point, Dodgeville, Baraboo, and Spring Green, allowing a tour of the stunning autumn landscape as you search for artists studios throughout the region. The tour brochure has a detailed map. We relied mostly on virtual navigator “Siri.”
For more information on the 2022 Fall Art Tour visit their site, and plan ahead for next fall: https://fallarttour.com/
It’s a romantic, adventurous gift with a special someone, or for anyone wanting to enjoy Wisconsin’s natural and artistic bounty.
2 We sampled a only small portion of the tour’s studios. Among the four towns, there were 49 studios open for visitors.