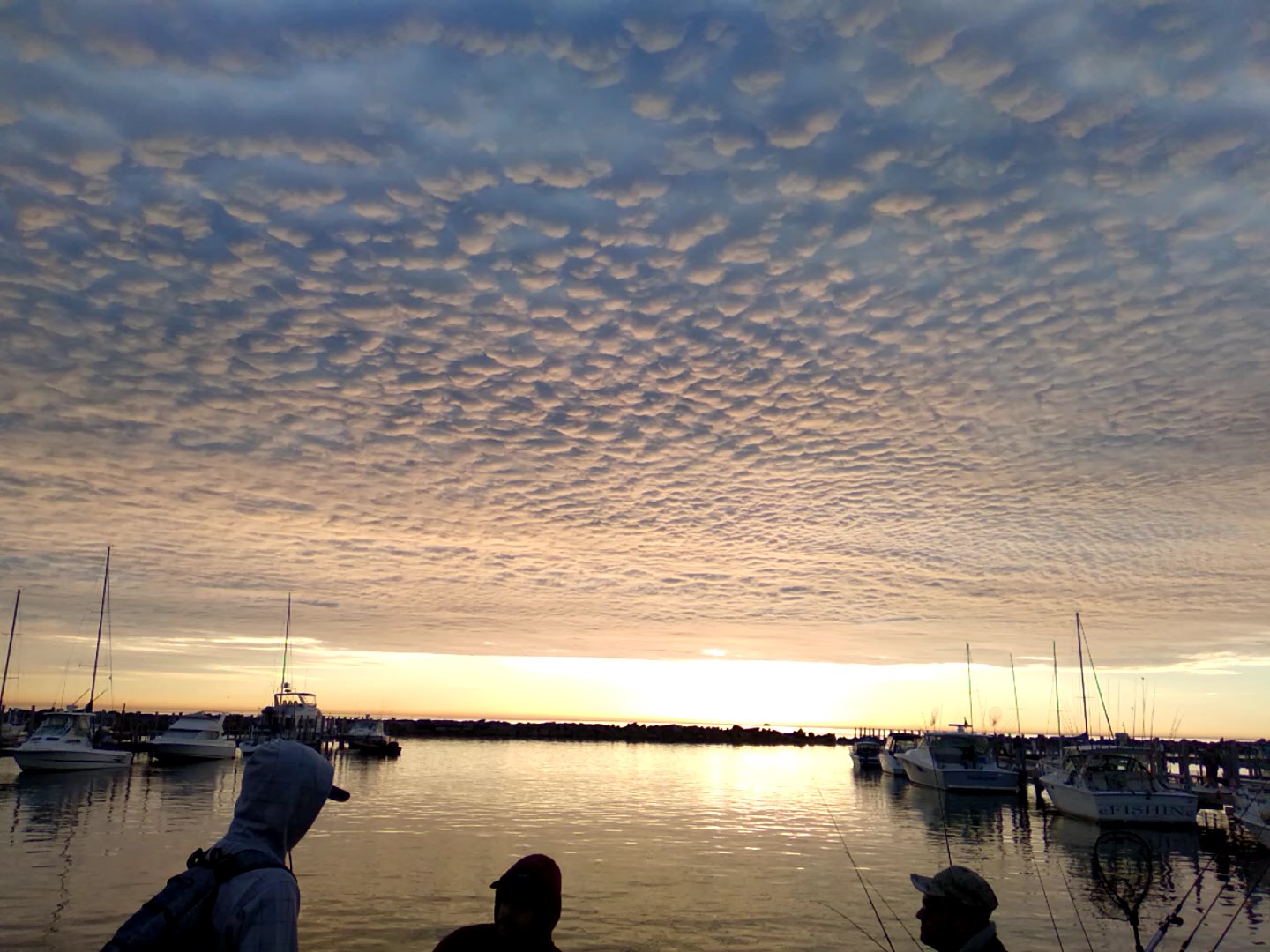 At dawn Saturday, a celestial ceiling hovered over Lake Michigan and my three fishing companions at the Fishing Has No Boundaries event. From left: advocate Alex Classen, and two wheelchaired participants, Luis Classen (Alex’s uncle) and Darrin Malsack. Photos by Kevin Lynch, unless otherwise indicated.

A celestial ceiling of clouds hovered over a radiant sunrise, as if heaven’s ethereal floor wasn’t too far aloft to reach. That slightly uncanny feeling lent my first indication this would be a special day. This luminous moment, pictured above, also blessed my three fishing companions, seen in silhouette, a few minutes before I even met them. So, I felt a quiet optimism even amid the slight chaos of the effort to get a variety of disabled participants, and their patrons (if they had one) matched up with boat captains and first mates.

The 501 3-C non-profit organization’s name, Fishing Has No Boundaries, * has both poetic resonance, for the most extravagantly intrepid of anglers, and a specific reference to enabling and empowering those who might not otherwise ever board a fishing boat, or handle a rod. It was founded in 1988 by a Hayward (WI) fishing guide after he broke his leg, and now has 18 mostly-Midwest regional chapters, but ranging from Colorado Springs to Cincinnati.

I’m fortunate that I still have fully able and mobile legs. A wayward flu shot and then a rotator cuff tear in my right shoulder on January 1, 2004, triggered an auto-immune attack which became a bilateral brachial plexitis. I ended up with a partially paralyzed left hand and, worse, severely chronic neuropathic pain in both arms and hands, ever since. I’ve become a one-handed typist as a professional writer. It’s been been my internal dwelling of living hell to this day.

I’ve tried gamely to not let the bilateral neuropathy limit me any more than it does. I got halfway through a PhD program in English at Marquette University, upon returning to Milwaukee from 20 years working at Madison’s The Capital Times, never telling anyone (wisely or not) of the MU administrative or faculty about my condition.

I use a medley of meds three times daily to manage the pain in my arms and, worst of all, in the left arm and atrophied hand. To this day, I’m literally dealt a losing hand on too many excruciating days which, with normal meds failing, leave me no other alternative but cannabis. (Though I hate to have to take it, the stuff is truly God’s gift!) 1

And in season, I strive to golf pretty much weekly (yeah, weakly) with three great high-school friends, John Kurzawa (a highly accomplished golfer), Frank Stemper and Ed Valent. The latter two go back with me to 4th grade, when my family moved to Shorewood and St. Robert’s grade school.

That brings me to my other great friend from St Robert’s, John Klett, who lived just half a block up from us on Beverly Road. John and I bonded strongly over mutual artistic inclinations (he would become a successful architect) and a passion for touch football, after my tackle football career was aborted by a serious broken leg in seventh grade. This was the intoxicating Lombardi era. So John’s younger brother Jim and a few other nearby neighborhood pals, including Bill “Tuna” Fliss, played in our street touch football matches, on Saturdays or Sunday mornings before Packer games.

John and I rekindled our friendship when I moved back to Milwaukee in 2009, and last year he invited me to participate in the Milwaukee chapter of Fishing Has No Boundaries. The whole point of this excellent organization is to provide a genuine fishing experience for people who are variously disabled, and to promote awareness and enablement of such people.

I’m hardly the worst-off participant, especially on a day when my meds are working. And last year, John’s son Jonathan came along as my able-bodied advocate. I needed his assistance during one fairly challenging reeling of a feisty Coho salmon, given that I needed to crank the reel with my relatively recovered right hand, while holding a serious fishing rod with my atrophied left hand.

I’d been out fishing with John and his brothers previously, but since becoming disabled I never seriously handled a rod. I had always enjoyed fishing even though my first Lake Michigan outing, a charter trip, with Frank and Ed decades ago, basically left me retching (wretchedly) with seasickness.

I really gained greater an appreciation for this sterling organization in this, my second year, and for my friend John Klett’s steady-as-she-goes chairmanship of the Milwaukee chapter, which rides increasingly high tides of success. This year the local chapter raised enough money for the event to be held at the South Shore Yacht Club, an upgrade in location. and with a hot lunch afterwards.

Plus, among all the wonderful volunteers, all the boat captains and first mates, the organization has strong and able members of the Milwaukee Fire Department who specialize in waterfront protection. These hearty fellows literally transport wheel-chaired participants to and fro, dock to the fishing boat. This photo depicts this critical aspect of enablement. 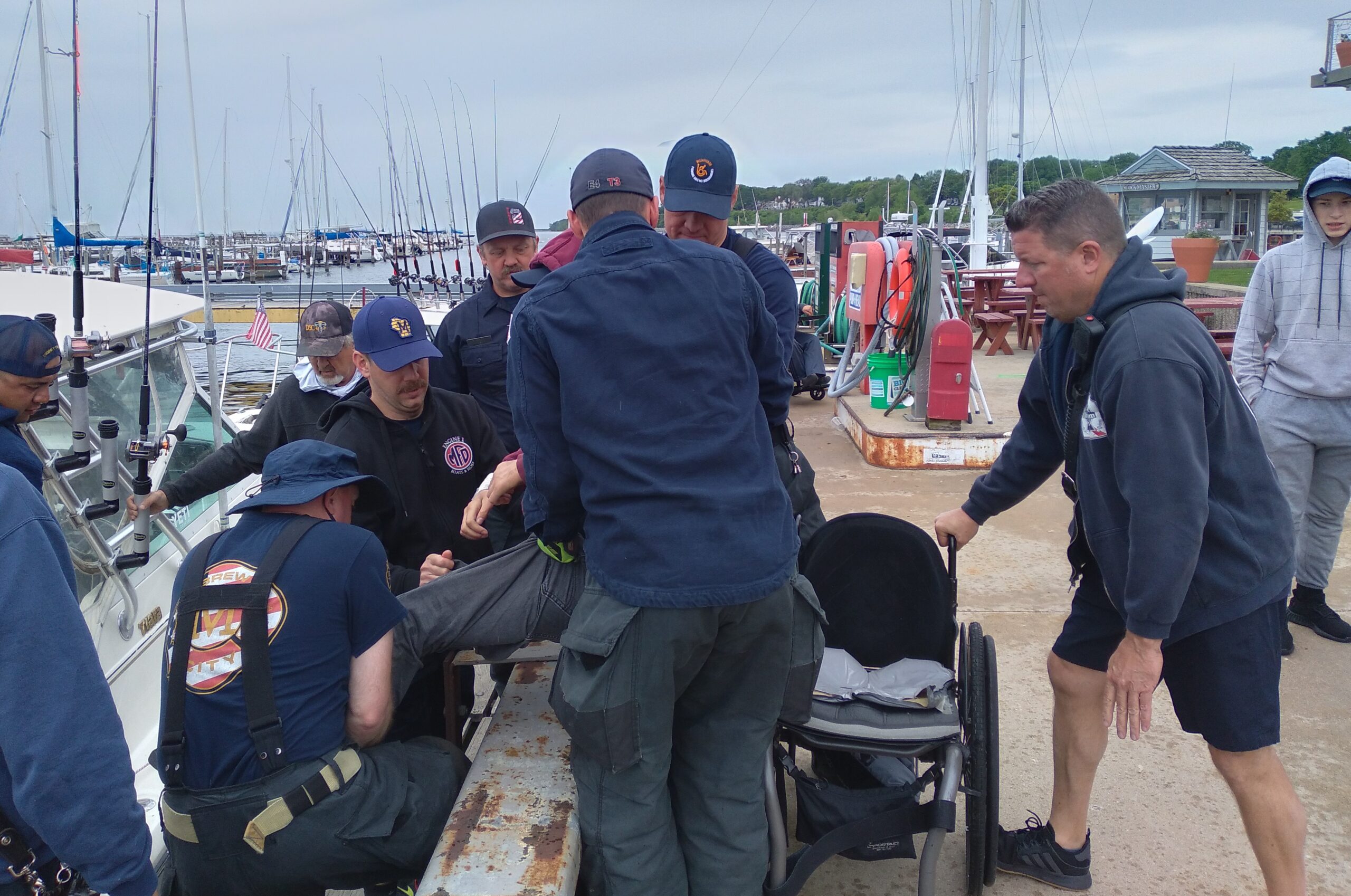 Milwaukee Fire Department volunteers hoist FHNB participant Luis Classen from the boat into his wheelchair, after our outing. Luis’s advocate, his nephew Alex Classen, watches at far right, and Captain Rick Sasek follows, in the background at left.

So Captain Rick Sasek’s cabin cruiser, The Salmon Safari, headed out on a chilly overcast morning. My participant mates were two quadriplegic men, Darrin Malsack and Luis Classen who, of the two, has the more advanced condition, at a C-6 cervical level. So Luis’s advocate assistance by his nephew, Alex Classen, would prove crucial. Darrin was actually a veteran fisherman who recounted catching a 75-inch sailfish in Florida and waxed rhapsodic about someday building the ideal fishing boat for his kind, which would enable him to fish standing up. “You can’t fish sitting down,” he mused.

Well, you can. Such an actual moment revealed the poignant value of FHNB. Here, such challenged people can let their angler’s dreams begin to unfurl, and catch the wind. It was Luis’s turn to reel in a fish. A salmon began fighting at the end of the line. His nephew Alex leapt into the fray and gripped the rod two-handed as Luis gamely began cranking in the line. Both his hands are significantly atrophied (like my left one), so he had to alternate hands in the long reeling effort. But he did it — the feisty fish finally flopped into the boat.

This was a prelude to the outing’s true climax. This time, able-bodied young Alex had the rod, with its thousand foot line, when the fish hit. Captain Rick and his longtime first mate Gary Dusyzinski both cried out, knowing immediately this was a serious foe. Rick checked the reel meter, which indicated that the fish had already pulled the line out beyond 550 feet. At one point, the mighty creature breached into the air and, even from this distance, prompted “oohs” and “ahhs.” Rick took the rod to demonstrate a technique for an extended battle  — alternated reeling with walking backwards with the taut rod to mid-deck.

After a bit of this in-the-moment instruction, he handed the rod back to Alex, who got the technique down pretty quickly. Still, this remained a hearty match against a strong fish’s will and guile. For a few moments, we thought we’d lost him but the line kept bouncing taut again. I had never witnessed anything like this. I flashed on the term “Nantucket sleighride,” used by 19th-century whalers when they were pulled along by a running, harpooned whale. It took 25 minutes before the silver-and-gray flashing fish finally arrived within netting distance. He proved too big for the net and jumped out once. I was slightly agog as Rick finally hauled the netted fish up. It was a genuine, broad-chested king salmon that would measure 36 inches and weigh nearly 23 pounds, his mouth bristling with mature teeth.

“This is so rare, at this time of the year, to get one of these,” said Rick, beaming with gratitude and pride. We’d quickly caught a bunch of Coho, and such success has partly to do with a savvy captain’s reading of fish grouping patterns and a new high-tech dynamic graphics screen depicting the region directly below his vessel. 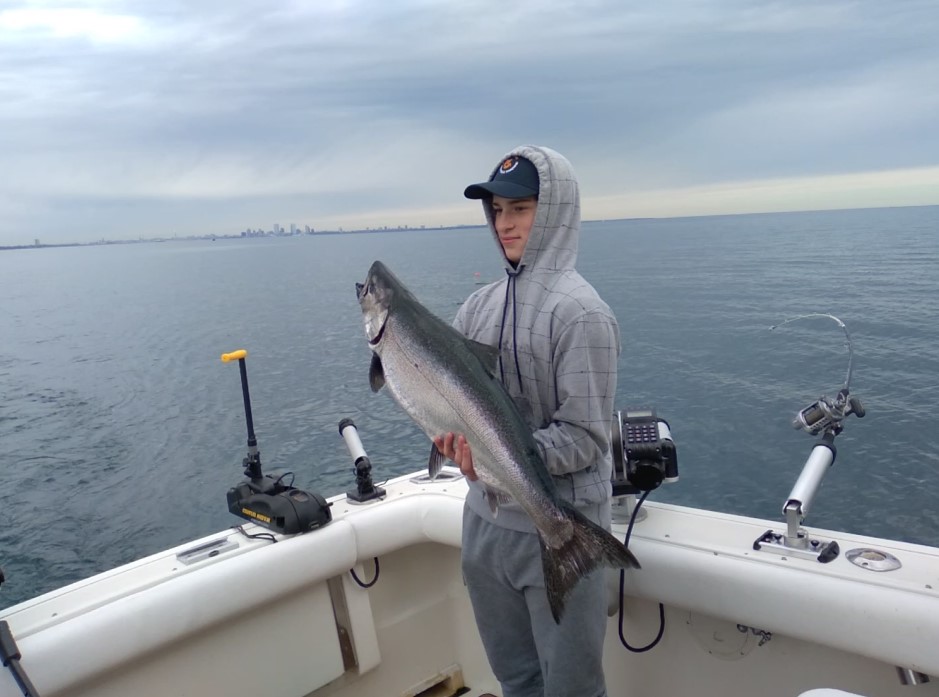 Advocate Alex Classen poses with his 36-inch King Salmon, shortly after he reeled it in in after a long, tough fight. The Milwaukee skyline lies in the far horizon.

Rick had also attached to this line a “dipsy diver” bait mechanism, which drops to the greater depths where king (or Chinook) salmon dwell. 1

The captain was so excited that he decided to have us all pose with the sudden large haul, which the last hour or so had produced. He leaned so far back over the edge of the boat to get this photo angle that I yelled out “Man overboard!” Here’s the photo below, with the king  salmon in the middle. We actually caught two more Coho after this shot, and concluded our bountiful morning by snagging a large, gorgeously speckled lake trout. 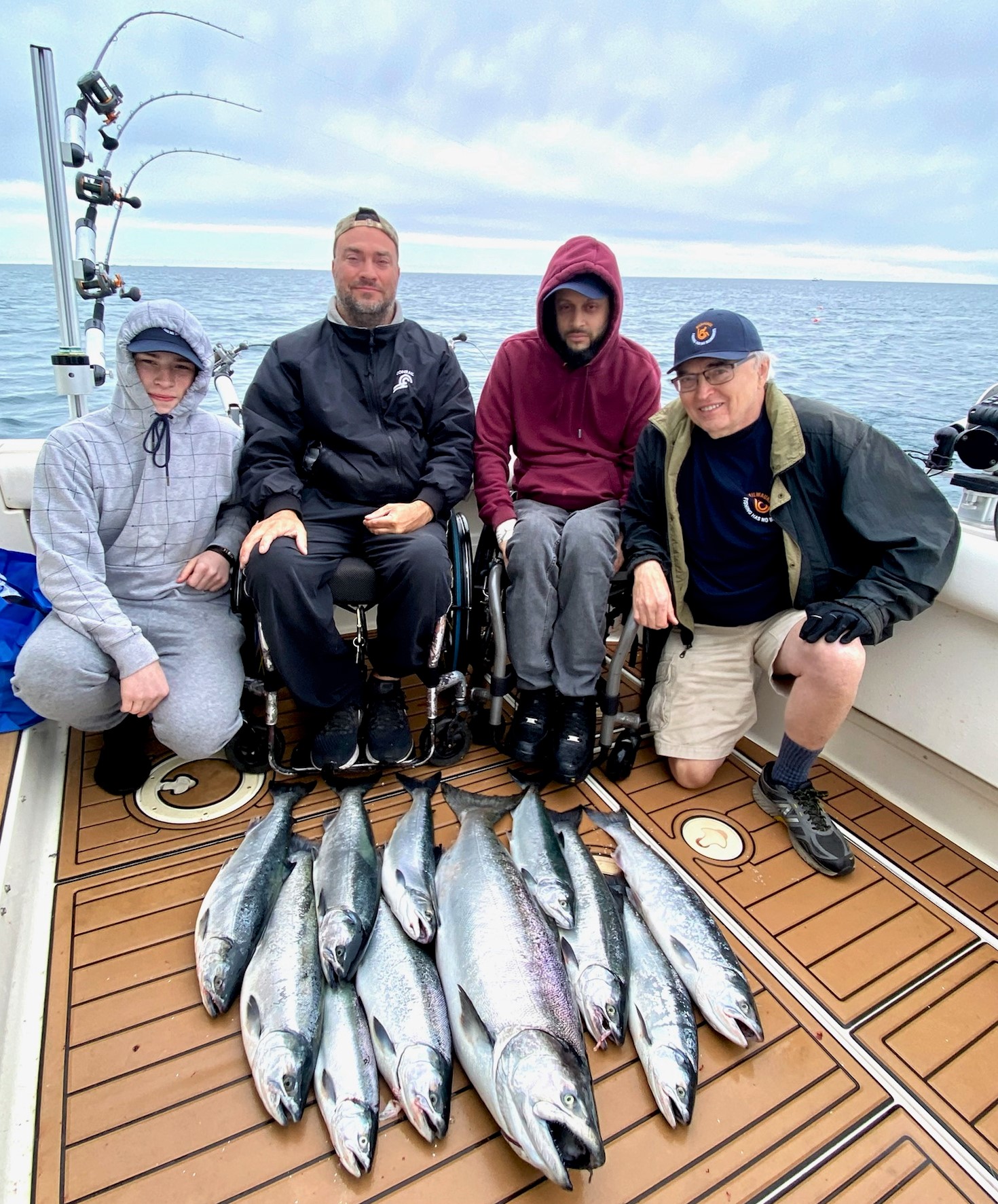 Our Fishing Has No Boundaries crew poses with our partial catch of salmon including Alex’s king salmon in the center. From left: Alex Classen, Darrin Malsack, Luis Classen and Kevin Lynch (Kevernacular). Photo by Capt. Rick Sasek.

The captain knowingly predicted that this king salmon would be the prize-winning catch of the day, which proved exactly correct.

Chairman John Klett made the announcement as we munched on freshly grilled hamburgers and giant hotdogs and big chocolate cookies. 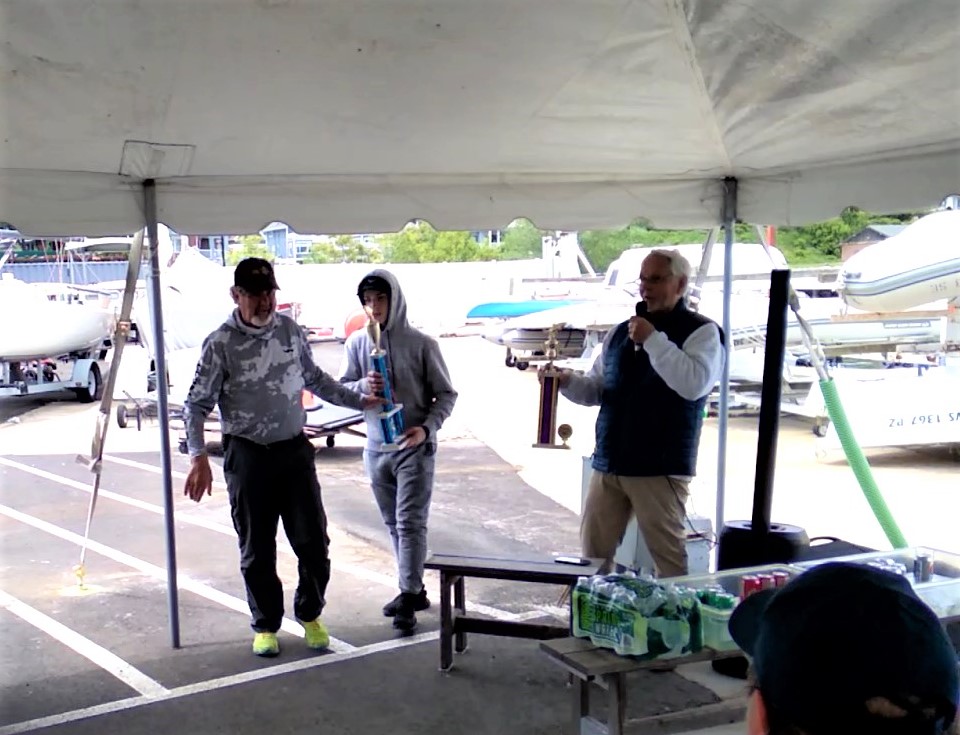 In retrospect, I felt some of the respect for the great and small creatures of the watery world, whom narrator Ishmael eloquently honors in Melville’s classic novel Moby-Dick. So, my first meal of one of these freshly-caught creatures, grilled up that night, held an aspect of sacred ritual. I thought of the lovely spontaneous prayer that John’s wife, Mary Nold-Klett, had offered for the gathering after the outing’s lunch. This well-conceived and organized event truly empowers the body and hoists the spirit, embodied in the great, glistening fish itself.