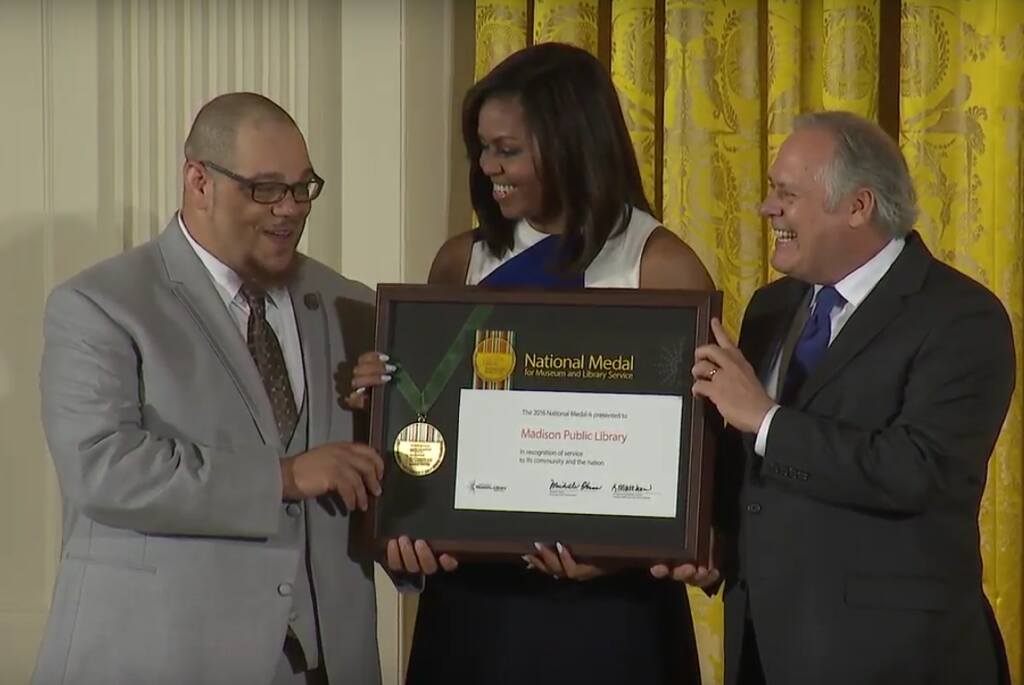 Hip-Hop artist and historian Rob Dz accepts a 2016 National Medal for Museum and Library Service from first lady Michelle Obama on June 1 on behalf of the Madison Public Library, for his own career advancement and educational work in a library outreach program in music production and promotion.

“The library is so much more than just books, baby!”

That’s the take away of Rob Franklin, a.k. a. Rob Dz, a Madison-based hip-hop artist and historian, and one of my favorite Wisconsin artists.

How much more is the library? The Madison Public Library has transformed this talented man’s financially-strapped career.

“All my dreams of sharing my gifts to the world were fading.” he recalls. Rob was at crossroads, maybe the kind where the devil lurked, grinning right in his face, as the “Crossroads” myth went for bluesman Robert Johnson.

Rob no longer had the finances to make any recordings of his art. But he didn’t have to sell his soul to the devil to get what his dreams requested.

The Madison Library was attuned to his talents and his value to the community. They stepped into the path of uncertainty and darkness and set him up in the library’s Bubbler program and Media Lab services. This provided him access to and instruction in their full production facilities, for visual and graphic design, sound engineering, photoshop and other production services.

The upshot was that Rob dug in and learned how to use these tools, and brought his career back to life. His production work for himself and other financially and socially disenfranchised young people led to a great honor. On June 1, Rob Dz accepted a 2016 National Medal for Museum and Library Service from the Institute of Museum and Library Services. First lady Michelle Obama, a strong proponent of youth literacy, presented the award to Rob, on the library’s behalf.

What a trip! And for sure it was a journey to learn, create and teach in the light of creative life. Rob explains his trip in a video in the story I have linked here.

Bering among this year’s award recipients was a thrill for Rob, and here is First Lady Michelle Obama’s awards speech and presentations.

The Library’s Bubbler program has replenished Rob Dz and, he hopes, will help transform his career. And once he learned this and got back up to speed in terms of DIY technical creativity and career advancement, he realized it was time to “pay it forward” with his knowledge. “I was able to teach not only production, but personal branding and development classes as well,” he explains

I take personal pleasure in this for several reasons. I was aware of Rob’s talents and knowledge when I covered the arts for The Capital Times in Madison for nearly 20 years. I also had a sense of how is talents translated into education. So I hired him as a guest lecturer for the cultural journalism class that I taught at Edgewood College in Madison in 2007-8.
He presented a concise, but incisive and lively history of hip-hop to my aspiring journalists, and it was one of the most rewarding classes I’ve ever presented.

Next he popped up as a member of the Chicago Yestet, a vibrant and socially and politically conscious jazz band led by trombonist and composer Joel Adams, a former Madison musician now based in Chicago. A highlight of their debut album was the brilliantly droll Rob Dz commentary on George W. Bush titled “The Decider.” Then came several thought-provoking and empowering songs on the band’s latest album Just Say Yes, including Rob’s lyrics ingeniously updating Lennon and McCartney’s “The  Long and Winding Road.” Here’s the adaptation, performed at Chicago’s Green Mill jazz club.

The greatest part of Rob’s library project was the chance he had to teach kids at risk at the city’s juvenile detention center.

“These are kids who have had some pretty harsh lives,” he explains. “To be able to give joy to some of those kids’ lives has probably given me more satisfaction than any recording I’ve done for my self. To be able to pay it forward and let other people express themselves is awe-inspiring. The library is so much more than books, baby!”

Rob’s long and winding road led to the library door. Kudos and high fives to Rob Dz and the Madison Library!