“There is sobbing of the strong/And a pall upon the land/ But the people in their weeping/Bare the iron hand/ Beware the people weeping when they bare the iron hand.” — Herman Melville, “The Martyr” Battle Pieces and Aspects of the War

Amid a rousing theatrical comedy, a Derringer pistol bullet tore into the back of Abraham Lincoln’s head. Somewhere in the shadows of the tragedy stood Mary Surratt. The horror of John Wilkes Booth’s fanatical assassination of Lincoln turned the national government into a vindictive prosecutor and it most likely miscarried justice for Surratt, the first woman ever executed by the US federal government. 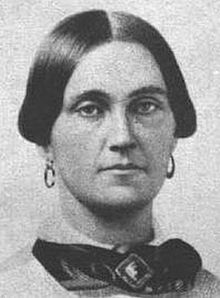 Nine Union military officers deemed her guilty of conspiracy in Lincoln’s assassination. Surratt however  doesn’t even earn an index mention in the exhaustive Oxford Guide to United States History.

Nevertheless her case is the most controversial legal decision to emerge directly from the assassination. The recent Robert Redford-directed film The Conspirator, now out on video, brings the hanged woman back to life in one of the most compelling historical dramas in recent memory.

It is a tragedy of the South – especially of a border Civil War state — Maryland, not unlike Missouri where I visited recently — both with complicated Civil War legacies. It speaks to the unpredictable ways that a wounded   democracy can assert itself, all too often in perversions of our Constitutional ideals.

And it is a story of womanhood wronged by political blood lust for revenge. At a time when a woman still could not vote, Surratt became a sacrificial lamb for a nation understandably lashing out. President Andrew Johnson limited voting to white men who “assured the dominance of lawmakers unsympathetic to the rights of free people,” writes Michael Les Benedict. 1 This led to the reviled “black codes” which “circumscribed black southerners’ civil rights.”

And the Surratt trial also speaks to our post 9/11 era of sometimes reactive persecution of whomever might satisfy the lust for vengeance, disguised as justice for the sake of security.

The nine-man military commission appointed by Johnson to investigate the assassination  “was illegal in the sense that it should have been a civilian rather than the military proceeding “ and “seemed to be interested in vengeance, not truth,” Kenneth Davis writes 2.

The Conspirator reveals that Secretary of War Edwin Stanton (Kevin Kline) will settle for either Mary Surratt or her son John, who successfully eluded capture and was most likely an actual conspirator.

Robin Wright magnificently embodies the eloquently stoic suffering of Surratt, who spends a long time in jail as her case is processed. In reality Surratt suffered from extreme menstrual pain during this period.  This somewhat unseemly reality is glossed in the film which has her on a hunger strike which threatens her health.

Also excellent is James McAvoy as the young attorney Frederick Aiken, a former Union officer who is convinced of Surratt’s guilt though appointed to defend her. He gradually comes to understand the trial’s  injustice and fights valiantly, even despite Mary’s enigmatic recalcitrance.

Why is Surratt important? Because at a crucial point in our nation’s psychic history she showed how vulnerable our citizens and judicial system are to corruptions of self-righteousness.

It was like executing the mother of an accomplice of Lee Harvey Oswald because you couldn’t find the right man. Surratt ran a boarding house not far from the Ford Theater where she admitted John Wilkes Booth met with other men repeatedly before the assassination.

All the evidence against her was circumstantial. Knowing Booth, carrying a message for him to Lloyd (to have “the shooting irons” ready) and failing to recognize conspirator Lewis Powell one evening (after the assassination; she had poor eyesight) was the sum of the case against her, “none of which constituted a crime,” wrote historian Laurie Verge 3. Many testified that Surratt was actually loyal to the Union and took the “conspiratorial” trip in question only to collect debts owed her husband.

“She was simply an unsuspecting pawn of John Wilkes Booth,” Verge concludes. 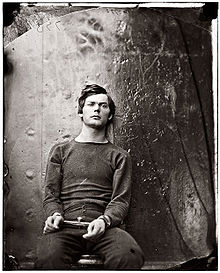 Given the ambiguity of her guilt, the real question is whether the gallows was the proper sentence for her. Thirty-one people testified for Surratt’s defense.  Among nine prosecution witnesses, only two provided notable testimony:  John Lloyd, who denied Surratt’s guilt then changed his story, and Louis Weichmann, who witnesses said was extremely intoxicated the night of the assassination but managed to fix a wagon wheel for Surratt.

President Johnson overturned Aiken’s writ of habeas corpus for a civil trial, (a war-era administrative power ironically enacted by Lincoln) and then denied seeing the clemency plea signed by five members of the commission. These circumstances became issues in his impeachment proceedings two years after Mary’s execution.

On July 7, 1865, at 1:15 P.M., a military procession led the four condemned prisoners through the courtyard and up the steps to the gallows. Each prisoner’s ankles and wrists were bound by manacles. Mary Surratt led the way, wearing a black bombazine dress, black bonnet, and black veil. More than 1,000 people—including government officials, members of the U.S. armed forces, friends and family of the accused, official witnesses, and reporters—watched. 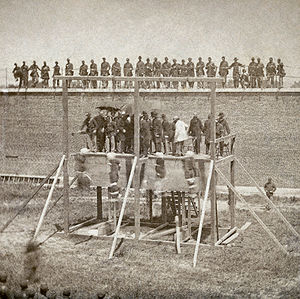 Powell, whose dagger failed to kill Secretary of State William Seward, swore to Surratt’s innocence shortly before he was hanged. “The worst pretense of all was to imagine the Civil War over,” writes historian Walter McDougall. The North “embraced the myth that the nation’s sins had been purged by the blood of their soldiers and president.” 4

Thus purged some became avenging angels. Director Redford infuses The Conspirator with deep shafts of sepia light evoking the “magic realism” of the proceedings and as  beacons for the truth in an era when men could bury it in the cold tombs of intransigent,  pompous hatred.

With all the technology that assists us today, DNA testing included, the truth and justice can still be just as elusive.

And sadly, violence — both legally codified and criminal — against women remains a topic of serious debate in 2012.

3 Laurie Verge, The Trial: The Assassination of President Lincoln And the Trial of Its Conspirators, A Special Edition Of The Trial Transcripts. Ed. Edward Steers Jr. 2003 University Press of Kentucky.