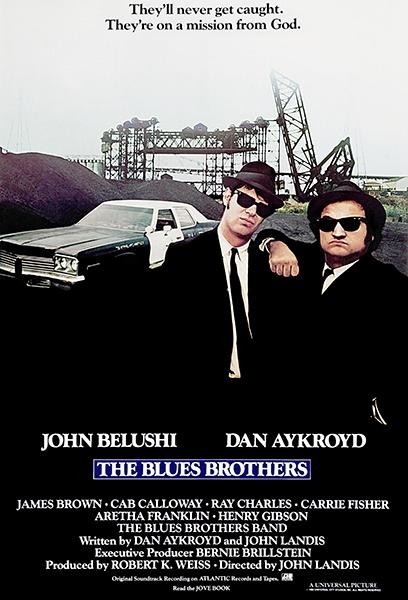 I was driving east on Milwaukee I-94, heading home after my slightly nerve-wracking part-time job as a school bus driver (a job to augment free-lancing for The Milwaukee Journal). It was always stressful, yet gratifying, having other people’s precious children in your hands, to deliver them safely to school, or home (even the obligatory brat-distraction every few rides).

My nose had just rid itself of the funky Red Star Yeast smell ever-permeating the 16th street overpass (back then). So, as I now enjoyed the sunny afternoon and approaching lakefront, I noticed a car, with smoke billowing from its hood, speeding down the still-under-construction Lakefront Freeway, which had gone so long uncompleted, it was dubbed “the freeway to nowhere.”  Another car followed in hot pursuit.

My God, I thought instantly, two cars headed for the end of the unfinished freeway segment which leads to pure, thin air, high above the lakefront !

In the next moment, I noticed a mobile film camera unit following the cars. Crazy, man!

Then I recalled the news that director John Landis had brought the production company, for his forthcoming big-budget comedy The Blues Brothers, up to Milwaukee from Chicago, where all of the film is ostensibly set, and shot. However, for a climactic chase scene, Landis needed an elevated freeway that ended in pure nothingness, and Milwaukee had it.

Having by chance seen this bit of filming in person, I looked forward to the movie, starring John Belushi and Dan Aykroyd, which turned out to be one of the zaniest and most brilliant car-chase comedies since It’s a Mad, Mad, Mad, Mad World. Plus, it was a hip sort of roots musical, with one of the greatest arrays of musical talent ever performing in a scripted film.

And now, The Blues Brothers has received one of the ultimate formal recognitions, having been inducted into the 2021 National Film Registry of the Library of Congress (I didn’t know about this until my sister Sheila Lynch emailed me yesterday with the news.).

There’s no question it’s a great comedy (at times over the top, of car after crashing car) worthy of the registry, and absolutely bursting with stirring blues, soul and gospel music by such legendary onscreen performers, including Aretha Franklin, James Brown, Ray Charles, Cab Calloway, Chaka Kahn, and the Blues Brothers’ (Belushi and Aykroyd) own rhythm section, comprising the great studio musicians best known collectively as the MGs, as in Booker T and the MGs. The movie’s soundtrack is a classic of that those genres of recorded music.

Here’s a video clip from Aretha’s knock-out performance of “Think” in the film, where she plays an under-appreciated, overworked waitress at a cafe the boys stop at for lunch. 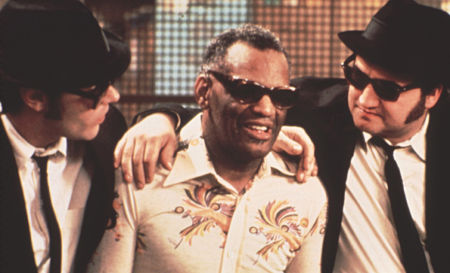 The bros also commiserate with one of the mightiest of soul brothers, Ray Charles (That’s what I said!). Courtesy IMDb 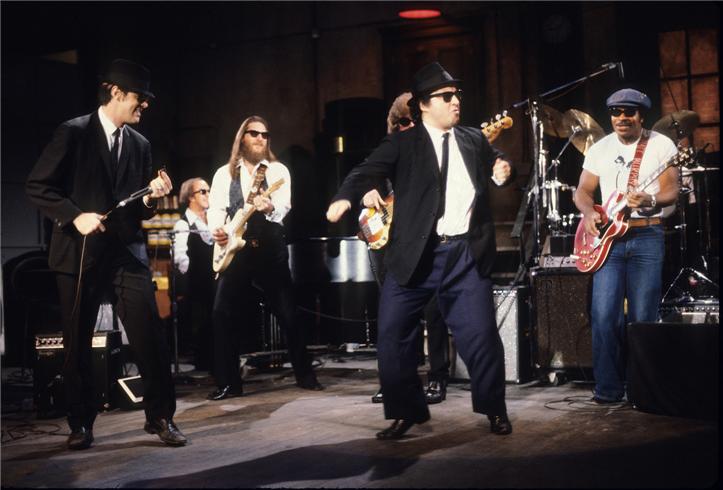 Jake and Elwood Blues do a rave-up with, among others, legendary R&B guitarist Steve Cropper (white long-sleeve shirt, in background) Courtesy https://oneroomwithaview.wordpress.com 1

And it’s got a very redeeming storyline (with a script co-written by Akyroyd and Landis)  in which paroled convict Jake and his blood brother Elwood, set out on “a mission from God” to save from foreclosure the Roman Catholic orphanage in which they were raised. To do so, they must reunite their R&B band and organize a performance to earn $5,000 needed to pay the orphanage’s property tax bill. Along the way, they are targeted by a homicidal “mystery woman”, Neo-Nazis, and a country and western band— all while being relentlessly pursued by the police.

During the high-speed chase from a battalion of cop cars, on Wacker Drive with its numerous buttress I-beams under the Chicago “L,” with the Bluesmobile surging up to 120 mph (according to their speedometer), the brothers still find a moment of cultural acknowledgement.

“Up ahead is the Honorable Richard G. Daley Plaza,” driver Jake announces.

Here’s the Library of Congress announcement of the 25 new films inducted for 2021: https://blogs.loc.gov/now-see-hear/2020/12/library-of-congresses-announced-25-new-films-for-the-national-film-registry/

The brothers journey actually begins the night before — or in the wee hours of the morning (the film’s timeline isn’t exactly bulletproof) somewhere in Northern Illinois, where Jake and Elwood begin their quest to transport the money they’ve raised to save their childhood orphanage to Chicago City Hall in their decommissioned cop car with the famous line: “There’s 106 miles to Chicago. We’ve got a full tank of gas, half a pack of cigarettes, it’s dark out, and we’re wearing sunglasses.”

When I saw the film in the movie theater, I enjoyed it immensely and near the end, came the final freeway chase scene between The Blues Brothers and another even more nefarious foe, Neo-Nazis, led by the comic actor Henry Gibson. Then, in an editing flash, I recognized the Milwaukee interchange and skyline, as the chase’s backdrop. 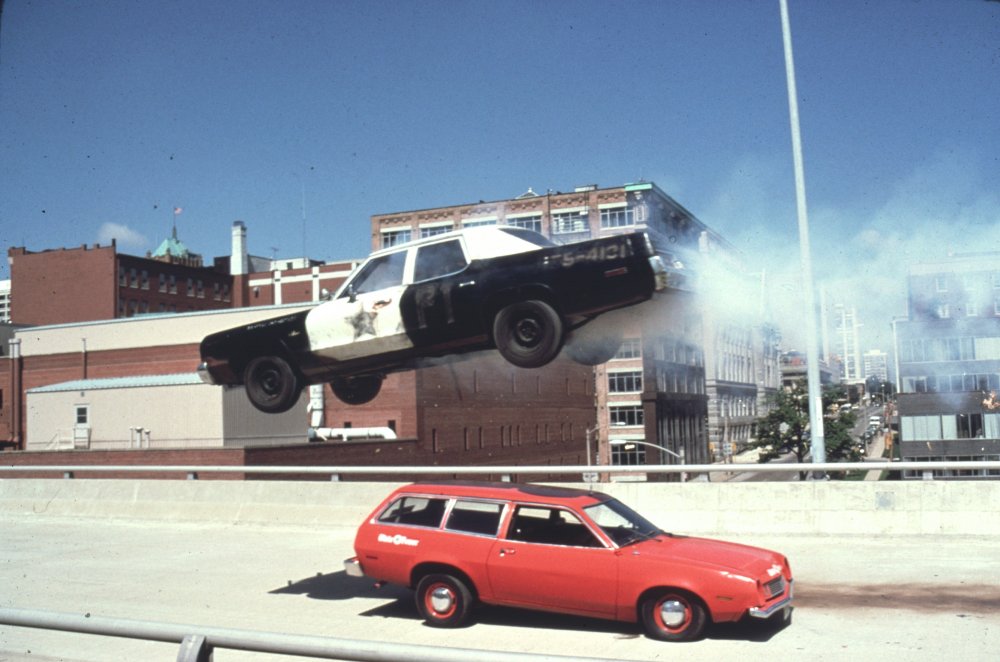 In this stunt scene from “The Blues Brothers,” the Bluesmobile flies over another car in a scene, I believe, from the segment filmed in in Milwaukee. Courtesy Universal/Kobal/Shutterstock.

Sure enough, they’d used that segment in the film. Then, in one scene of the chase I noticed, in the background, a small white car following slowly behind, off to the right. I squinted, blinked my eyes, and then exclaimed right in the theater, “That’s my car!”

Several annoyed moviegoers turned to glare at me. But sure enough, it was me driving my white AMC Hornet with its bent-up front bumper (from an accident shortly after I bought it from Big Bills used car lot on Center and Fond du Lac Avenue). I’d never dreamed my car would be in a scene.

So, The Hornet and I had become “local color” in The Blues Brothers, even if only mainly white, with some rust highlights and a crooked chrome bumper.

In this clip (below) from that final scene, my Hornet is clearly visible for several seconds at the 1:20 mark, puttering along on the other side of traffic cones, as the Blues Brothers’ stolen cop car continues its epic flight scene from the Neo-Nazis.

The scene, by the way, has a priceless throwaway line – from one Nazi to the other –  that seems like an oblique homage to Joe E. Brown’s classic closing line from another great comedy, Some Like it Hot.

If you freeze the frame at 1:24, and look closely, you might even make out my smashed-in front bumper (with the chrome bumper pushed up above the white body frame on the left side, as the photo of my car below shows)

The Blues Brothers vehicle, the so-called Bluesmobile, is seen in the movie poster photo at top with Jake and Elwood. The stolen cop car, a souped-up 1974 Dodge Monaco sedan, was chosen as one of the most iconic cars in movie history by GQ magazine.  2

So, in my small world, my little old AMC Hornet has become just a wee bit iconic, I daresay. The jalopy was a 3-speed stick shift on the column, and fun to drive. Here’s a photo of my “famous”‘ rust-bucket shortly before I traded it in for another used car, which would have another historic story attached to it, a tale for another time. 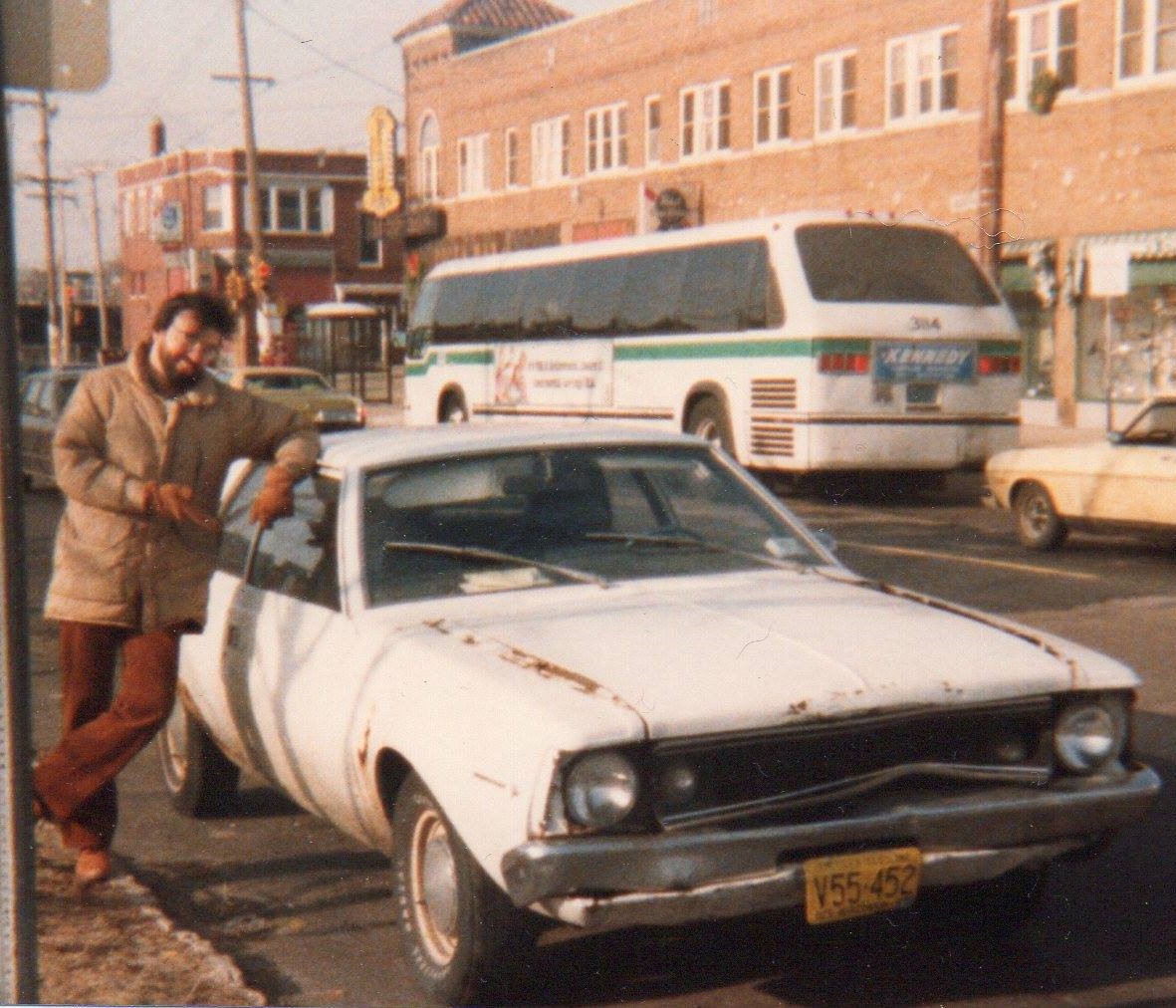 Kevin with his (iconic? or I comic?) AMC Hornet on the day he traded it in for a little red tin can called a Ford Fiesta.

1 This is actually a shot of the Blues Brothers performing on Saturday Night Live, the “brothers” genesis as well-known co-comedians. Most of the performance stills of the band from the movie are from the other side of a chain-link fence and poorly discernible. The fence was erected because the band was playing a warm-up gig in a country music bar, with a really tough crowd, before their successful big fundraising concert.

2 GQ commented, “The Bluesmobile makes the (most iconic movie cars) list not just because it was a cool car driven by cool dudes doing cool stunts, but because of the chaos left in its wake. The cars were so battered by all the stunts and crashes that there was a 24-hour body shop on set. By the end of the filming, 103 cars had been trashed, a record for any film, right up until a total of 104 was reached… by the sequel, Blues Brothers 2000.”