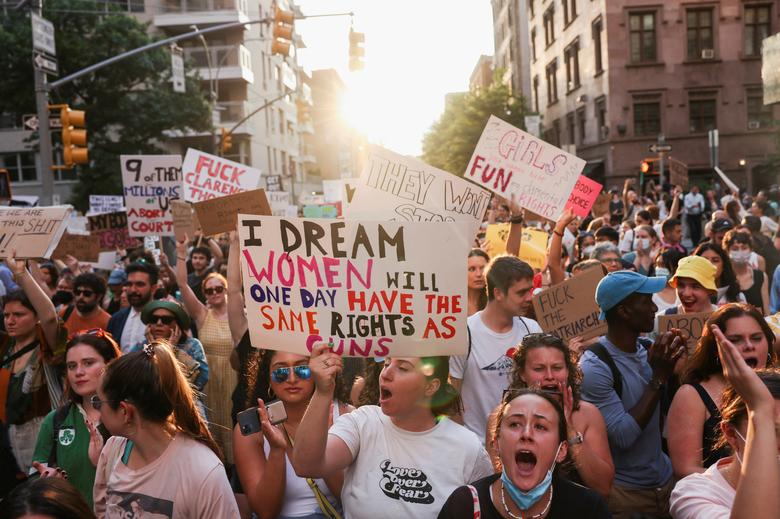 Approval of the Supreme Court has traditionally been high, as it is the branch of government seen as most above the taint of politics. However, The Milwaukee Journal Sentinel reports that the court’s public approval rating has plummeted, from 54% in March to 44% in May to a new low of 38% in July, according to a new national poll by Marquette University.

“The obvious cause is the June 24 decision known as Dobbs v. Jackson Women’s Health Organization, a ruling opposed by almost two-thirds of Americans who have an opinion on it.  The decline in the court’s approval has come entirely from people who disagree with that ruling undoing a constitutional right to abortion.” 1

I’ve read most of the decision and here’s why I think it went far astray from righteousness. The Court’s written majority opinion on overturning Roe v. Wade works hard to delegitimize the varied aspects of the inherent rights of women contained in a variety of established laws and precedents, and Constitutional amendments.

However, Justice Samuel Alito’s written effort is almost completely engaged in the abstract of legal theory and argument, and ultimately funnels all subsequent decisions on actual abortion in America into “a state’s assertion of powers” – which the majority opinion elevates to the status of a secular godliness.

Alito now brings to mind Pontius Pilate washing his hands (symbolically of Christ’s blood) after sentencing him to a public crucifixion. This decision will lead to the unnecessary deaths of countless women, mainly those disenfranchised women (typically of color) with little resources, who will be forced into “back-alley” abortions or self-abortions, or who will die in childbirth — a statistically far more dangerous situation than legal abortion from a qualified doctor.

How smart (and noble?) do the choice opponents think they are in their attempt to reduce abortions? This misogynistic ruling might work about as well as the institutionally racist “war on drugs.” An article in the latest issue of The New York Review of Books details how the now-reversed abortion bans in Ireland did nothing to reduce abortions. 2

Whatever happened to the rights of the individual Americans, under the premise that “all (persons) are created equal,” and due the same rights, as the Declaration of Independence declared? This is a very serious question, which must be answered.

In other words, the majority’s approach epitomizes the “above it all,” and “holier than thou” posture of those who would conceptually separate any potential child from their mother, even as it presumes to save the fetus’s life. ( As a male, I won’t even begin to do justice to such a posture forsaking the mother, the giver, and sustainer, of life). Both mother and child are forgotten, after birth, in this arid moral universe. Yet, a child is born to live a meaningful life, not merely born for the sake of being born. A healthy, nurturing mother is crucial to the baby’s survival, and subsequent growth and development, into a life of hopefully honest citizenship.

The peculiar nature of this doctrinaire separation of child and mother (by prioritizing rights of a fetus) and from their ensuing lives, characterizes the conceptual flaw of such a purity, indeed a Puritan, attitude, with its fixation on the moment of conception. It is profound inconsideration of real life. It is as if to say, there is a pure way to decide upon, and live life when, in fact, life is a complex weave of relative purities and distinct impurities, some which strengthen the corpus by the fortification of layered harmonies, just as a scar naturally strengthens a skin from further defilement or penetration.

Returning to religious terms that I hope some choice opponents might hear, there’s a difference between purity and holiness. Christ noted that “we are all sinners,” thus human purity is an oxymoron, if not an impossibility. We are blessed by God’s grace so that we may be forgiven our sins, or failings. Even the commandment “Thou shalt not kill” does not specify. Have we not all killed a living creature, in some sense, to consume for nutritional purposes? A mother must make the hard decision to bear  another child or not, so she may properly manage the burden of children she has already. Even a childless woman may not be ready for motherhood, for good reasons only she and her doctor know in reality. This is all part of the proverbial Cycle of Life, an often-harsh reality duly blessed by its Creator, to believers, but surely Darwinian to some degree.

Further, if we value the nuclear family, as conservatives typically purport to, how can that be formed or sustained properly when a woman is raped, or a victim of incest?

I will concede this, that an abortion should occur before the point of fetal “viability” or, if later, only if the mother’s life is otherwise seriously threatened by birth.

To another large point, imagine the consequences of widespread abortion bans in this vastly overpopulated world, a profound reason for the overconsumption of fossil fuels and overdevelopment bringing us the climate change threatening the planet. This gargantuan reality single-minded anti-abortionists seemingly ignore as well, with astonishing hubris.

By contrast, the dissenting Supreme Court opinion (from Justices Breyer, Sotomayor and Kagan) delves directly and profoundly into the personal realities of pregnancy, in all its threatening uncertainties. This is the real life that any woman or legal child, regardless of how she is impregnated, must face and endure. Regardless of what opponents of choice may think, she must face these realities, because the saving of a would-be child can, and ought, to be a blessing.

But that is always accompanied by the realities and hardships, psychological as well as physical, that the human body, even at its most empowered and exalted, struggles to transcend. This brings us again to her naturally endowed rights, to be able to live a humane life.

Read this from the court’s minority dissent:

“Whatever the exact scope of the coming laws, one result of today’s decision is certain: the curtailment of women’s rights, and of their status as free and equal citizens. Yesterday, the Constitution guaranteed that a woman confronted with an unplanned pregnancy could (within reasonable limits) make her own decision about whether to bear a child, with all the life-transforming consequences that act involves. And in thus safeguarding each woman’s reproductive freedom, the Constitution also protected “[t]he ability of women to participate equally in [this Nation’s] economic and social life.” Casey, 505 U. S., at 856. But no longer. As of today, this Court holds, a State can always force a woman to give birth, prohibiting even the earliest abortions.

“A State can thus transform what, when freely undertaken, is a wonder into what, when forced, may be a nightmare. Some women, especially women of means, will find ways around the State’s assertion of power. Others—those without money or childcare or the ability to take time off from work—will not be so fortunate. Maybe they will try an unsafe method of abortion, and come to physical harm, or even die. Maybe they will undergo pregnancy and have a child, but at significant personal or familial cost. At the least, they will incur the cost of losing control of their lives. The Constitution will, today’s majority holds, provide no shield, despite its guarantees of liberty and equality for all.” 3

Finally, and so sadly, we now have the disgraceful revelation of actual behavior of the majority’s principal author, Samuel Alito. We get a good sense of the man behind this atrocious decision. Alito showed some of his true colors in a recent public speech by mocking foreign leaders who condemned the decision, in manner dripping with condescension, because they have no right to an honorable opinion on “American law.”

Mother Jones magazine pulls no punches in reportorial response (below). But judge for yourself, in the video clip. Why is this man playing for laughs, about this matter?

Even more, he implicitly derides Macron, Johnson and others for being mere politicians. Yet what has Alito, Thomas and the three Trump appointees become, beneath their august robes, with such radical judicial activism, defying the opinion of the American majority, and of legal precedent?

Of Course Samuel Alito Is Bragging About It