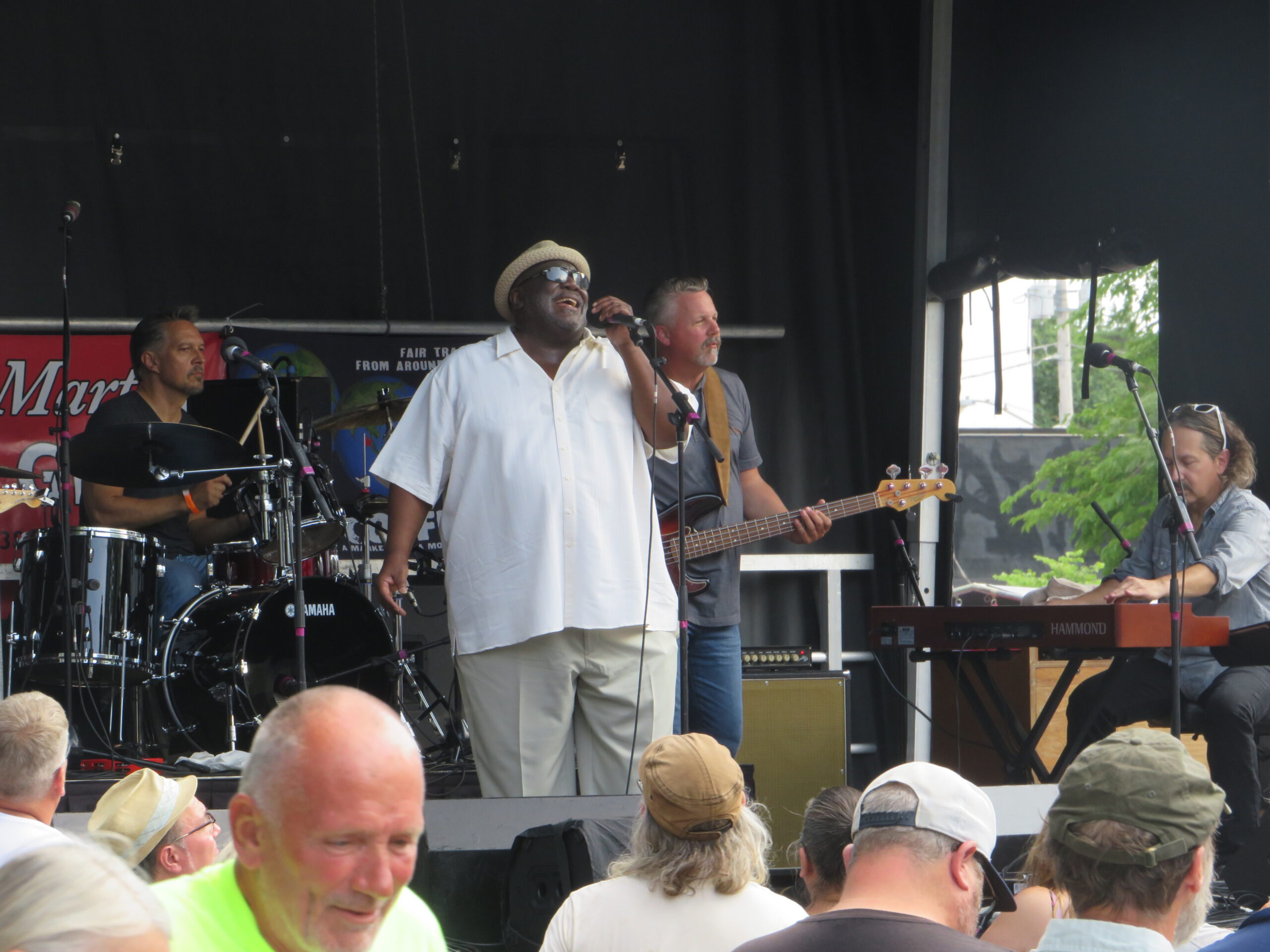 Lead singer Jeff Taylor and The Altered Five Blues Band were among the big crowd-pleasers at the 40th Annual Atwood Fest on Madison’s east side last weekend. All photos by Kevin Lynch

I had a fabulous sun-soaked weekend at the 40th annual Atwood Fest, on Madison’s east side. This is the best street festival I have attended in some time. For starters, Madison lived up to its colorful and left-leaning reputation, something you could see, hear and smell — in the steady scent of burning cannabis drifting into our nostrils among a group of people gathered under some shade trees listening to Steely Dane, on Sunday.

However I didn’t quite see everything I might have, to get the full experience.

I had my head down and was wearing my broad-brimmed sun hat as I riffled through used CDs at the WORT radio station booth. I heard my girlfriend Ann say, “Kevin, you just missed a topless woman, who walked right by.”

That did get me to look up, long enough to catch what is called “the philosopher’s view” of a striking woman (which Ann assured me she was), receding into the distance. But from 20 feet away I saw her liberally tattooed back, and attached to her (covered) derrière was a sign that read “MY BODY, MY CHOICE.”

She was clearly and boldly making a protest statement about the recent Supreme Court overturning of Roe versus Wade which had guaranteed women legal abortions since the mid-1970s. It was a vivid bit of symbolism, signifying her gender and sexuality and the inherent motherhood of the female bosom. (Of course me, the inveterate music album browser, had to miss the full impact). Still I give the woman credit and for her courage and commitment to, um, raising consciousness, as well as eyebrows.

There was also plenty of delicious food, but I’m here to offer you a photo essay on the music. I was drawn back to the city I worked and lived in for nearly 20 years after marvelous day at the Madison Jazz Festival, on the Wisconsin Union Terrace beside Lake Mendota, earlier this summer.

For us, the music started relatively low-key with Inside Pocket, a jazz quartet leaning toward contemporary and post-bop styles with several shapely compositions by guitarist composer Pat Metheny, even though there’s no guitarist in this group. However the group’s tenor saxophonist Bob Kerwin pulled us into a fine afternoon mood with, slightly brooding yet lyrical playing somewhat reminiscent of the cool-to-bop school of Lester Young and Dexter Gordon. 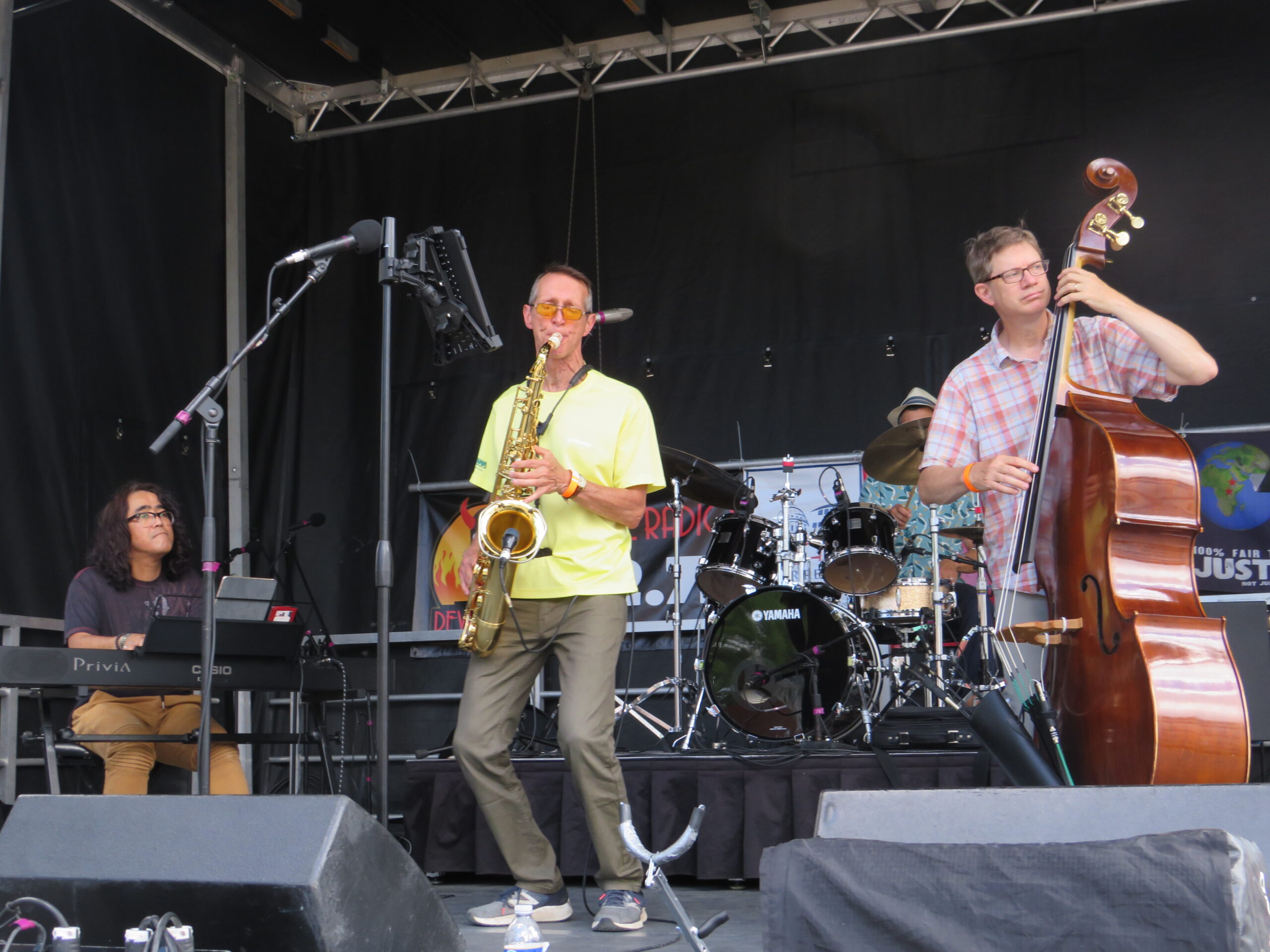 Tenor saxophonist Bob Kerwin of the jazz quartet Inside Pocket eased us into the stimulating atmosphere of Atwood Fest Saturday afternoon.

The next group we heard was actually playing their debut gig. Called with droll, non-P.C. panache, Lawnmower, it’s led my a fascinating and accomplished guitarist-singer-songwriter Louka Patenaude. A UW Madison music department lecturer, Patenaude has performed globally in a wide array of world music and American vernacular styles and contexts, including playing on recordings by Metheny and The Grateful Dead. Patenaude has played with most of the region’s top jazz musicians, including the award-winning Tony Castaneda’s Latin Jazz Sextet. I ran into Tony as he took in this sun-drenched set. Louka’s eclecticism is a tribute to both musicians’ open-minded voraciousness, given that what Tony, the master Latino conga-player, was listening to was something like bluegrass music. This group didn’t even have a percussionist. 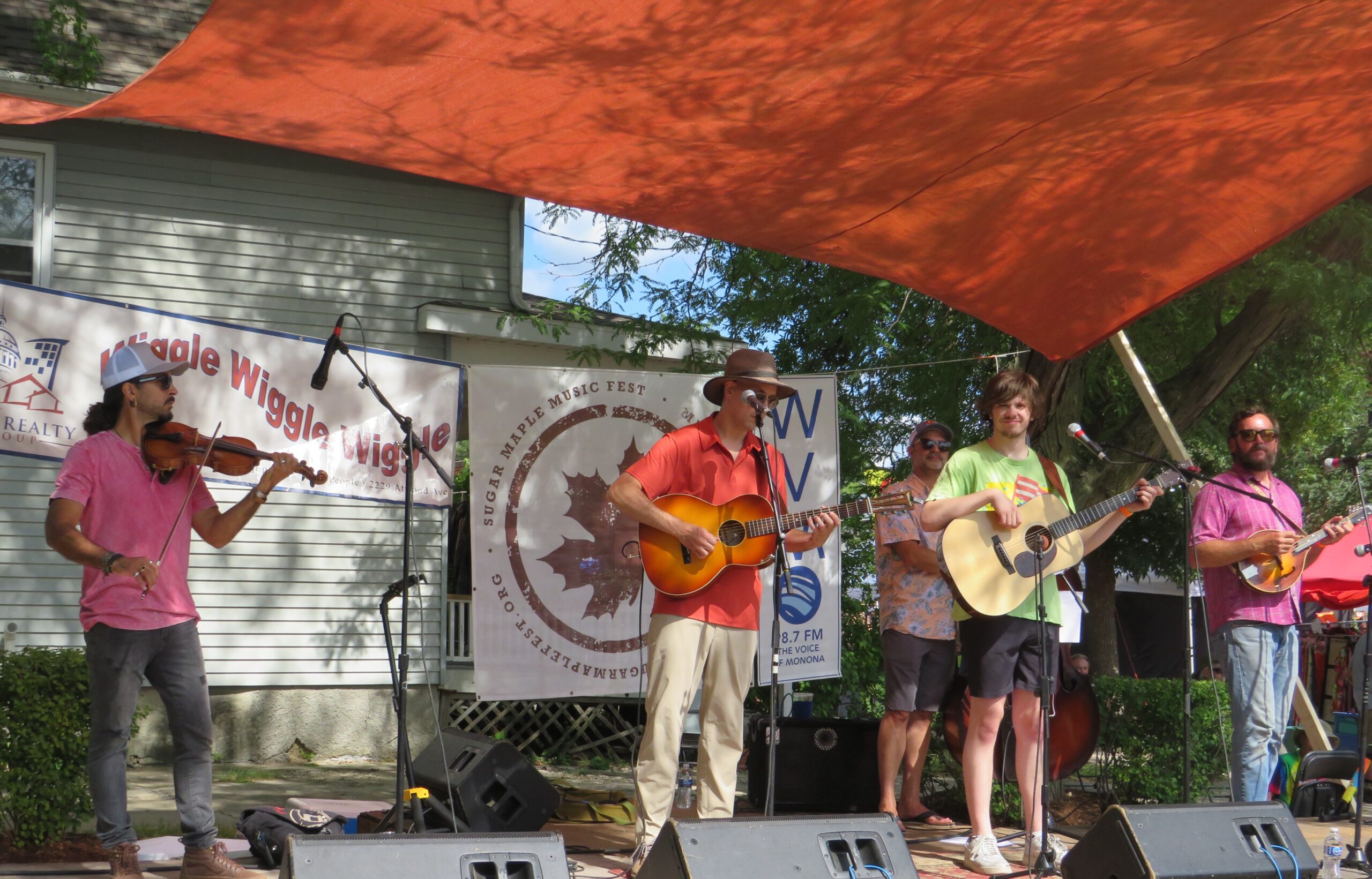 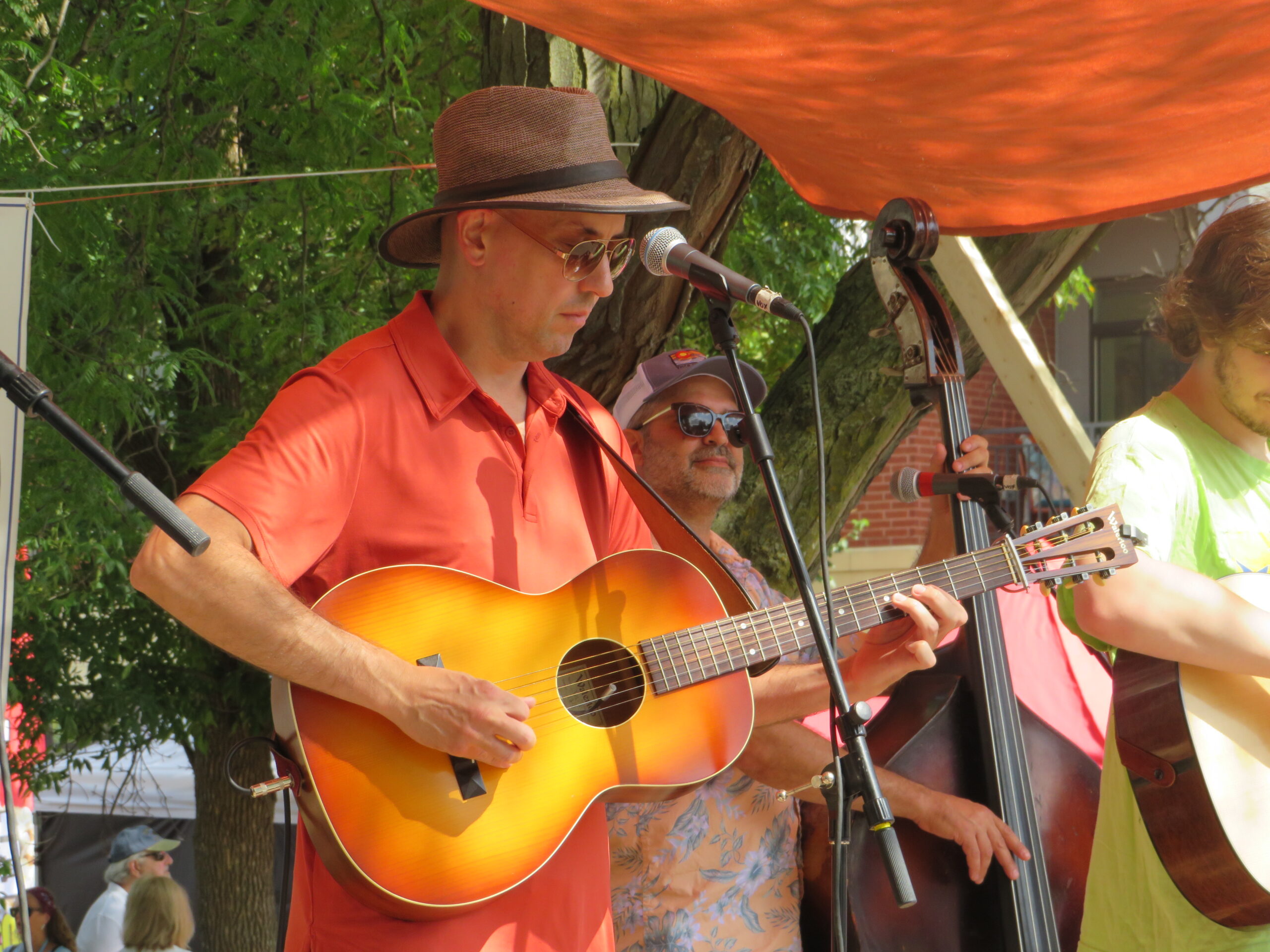 Louka’s band had the peculiar soulfulness of bluegrass mixed with sophisticated string-playing interplay, by turns lilting and rhythmically charged. As Castaneda said to me, “call it progressive bluegrass.” Fair enough. They performed mostly original songs by Patenaude, who’s worth checking out on his most recent album of mostly originals under his own name, titled Testing Your Patience.  However, he did end the set with an exemplary version of Bob Dylan’s “It Ain’t Me Babe.” The album includes Louka doing a sardonically laconic rendition of Dylan’s “Don’t Think Twice, It’s All Right.” Annotator Joy Dragland calls the album Louka’s “fever dream.”

Tony Castaneda split to check out the New Orleans band Sam Price and The True Believers at another stage, understandably because, he said the group’s percussionist was borrowing Tony’s conga drum. Price’s band was next on my list of “must hear” bands and they hardly disappointed. This was the most collectively high-energy group I saw that weekend with a swampy, funk style reminiscent of Little Feat, replete with slickly woozy organ playing, and a vibe both jittery and jumping. It also included a feisty, bouncy female singer and Price, a leather-lunged singer and bassist. They spilled over the whole street of Atwood with an infectiously greasy, gumbo boil.

Now we be dancing despite ourselves, lubed a bit, in my case, by a sudsy glass of Oktoberfest beer. 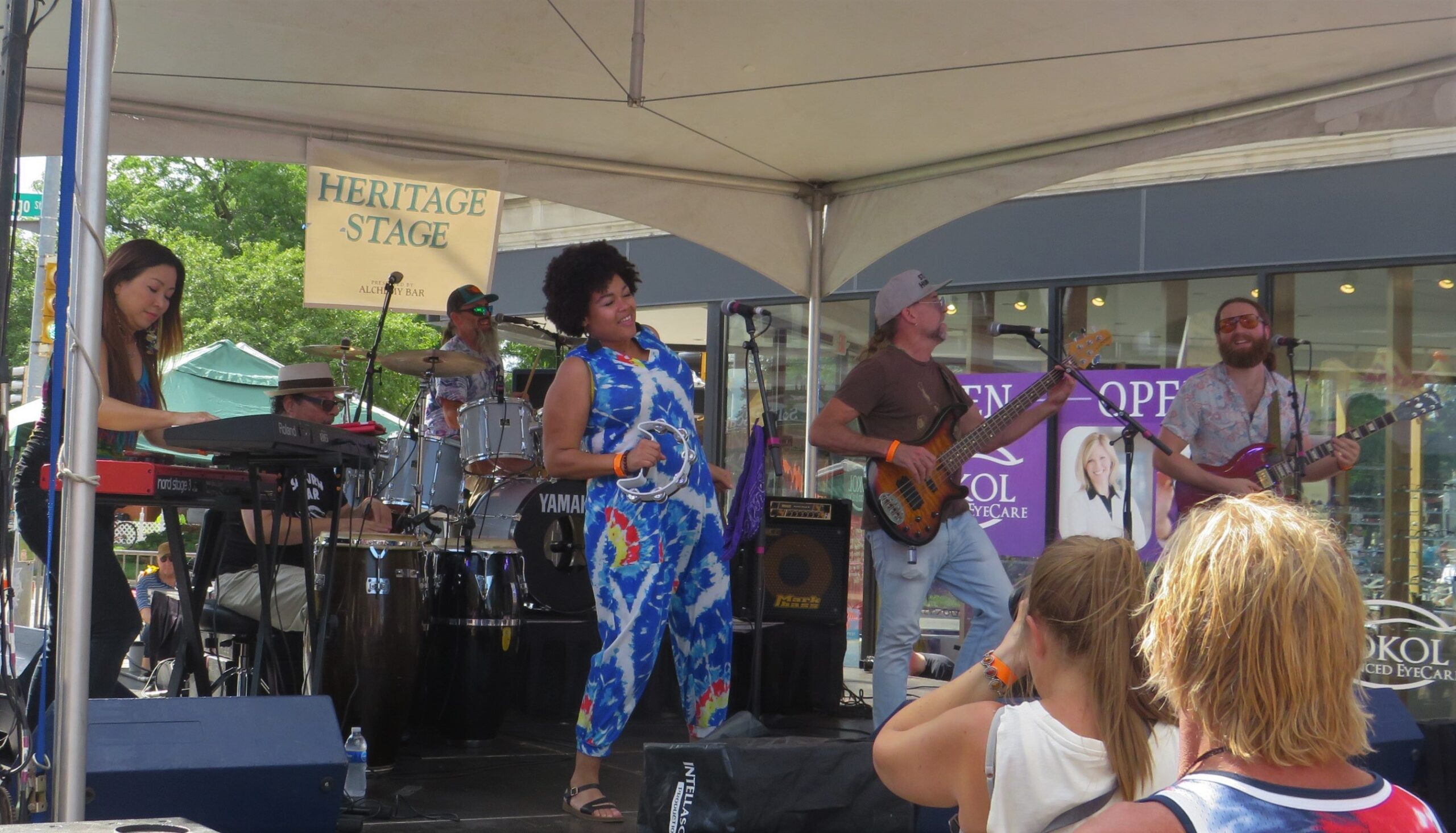 Sam Price, and The True Believers, straight from New Orleans, rock and boogie the Heritage Stage at the top of Atwood Fest, in it’s 40th year.

We then moved to the Clyde Stubblefield Stage to catch The Altered Five Blues Band, from Milwaukee. the band sure plays like it’s altered, in the best sense, probably with some of “Milwaukee’s finest.” Lead guitarist Jeff Schroedl was ripping off a searing solo just as we walked up, as the whole band doled out heaping helpings of steamy electric Chicago-style blues, interspersed with the hard rock edge that blues-style helped infuse the venerable vernacular with.

Rotund but rollin’ and tumblin’ lead singer Jeff Taylor may be “a heart attack waiting to happen” as retired NP Ann commented. But on this waning afternoon, he belted out the good gooey blue stuff with gusto, and a stentorian vocal heartiness recalling B.B. King. You can see and hear why this band as won awards, including current nominations from The Blues Foundation, for best contemporary blues album, Holler If You Hear Me, and the title song for “best song.”

But this afternoon, with beer in hand, I felt like the good-time strut of the band’s “Great Minds Drink Alike” :

After this set, gal pal Ann was running out of gas a bit, and my cup was drained, so we exited despite more good music to be had.

We planned to be back right when everything kicked off on Sunday with Steely Dane.

It was 12 noon when some folks are still in church, but the crowd gathered at the Clyde Stubblefield Stage ended up attending their own revival meeting. The resurrection is the music of Steely Dan. I’m normally not inclined to indulge much in cover bands. But I’d heard Steely Dane live previously and, frankly, they’re a gas. This band’s nominal wordplay conveys that it’s band members all reside in Dane County, the surrounding region of the one-of-a-kind capital city that is sometimes referred to as “sixty-four square miles surrounded by reality.” The way this world is right now, I was hungry for the hip escapism of those 64 squares, as epitomized by Steely Dane. 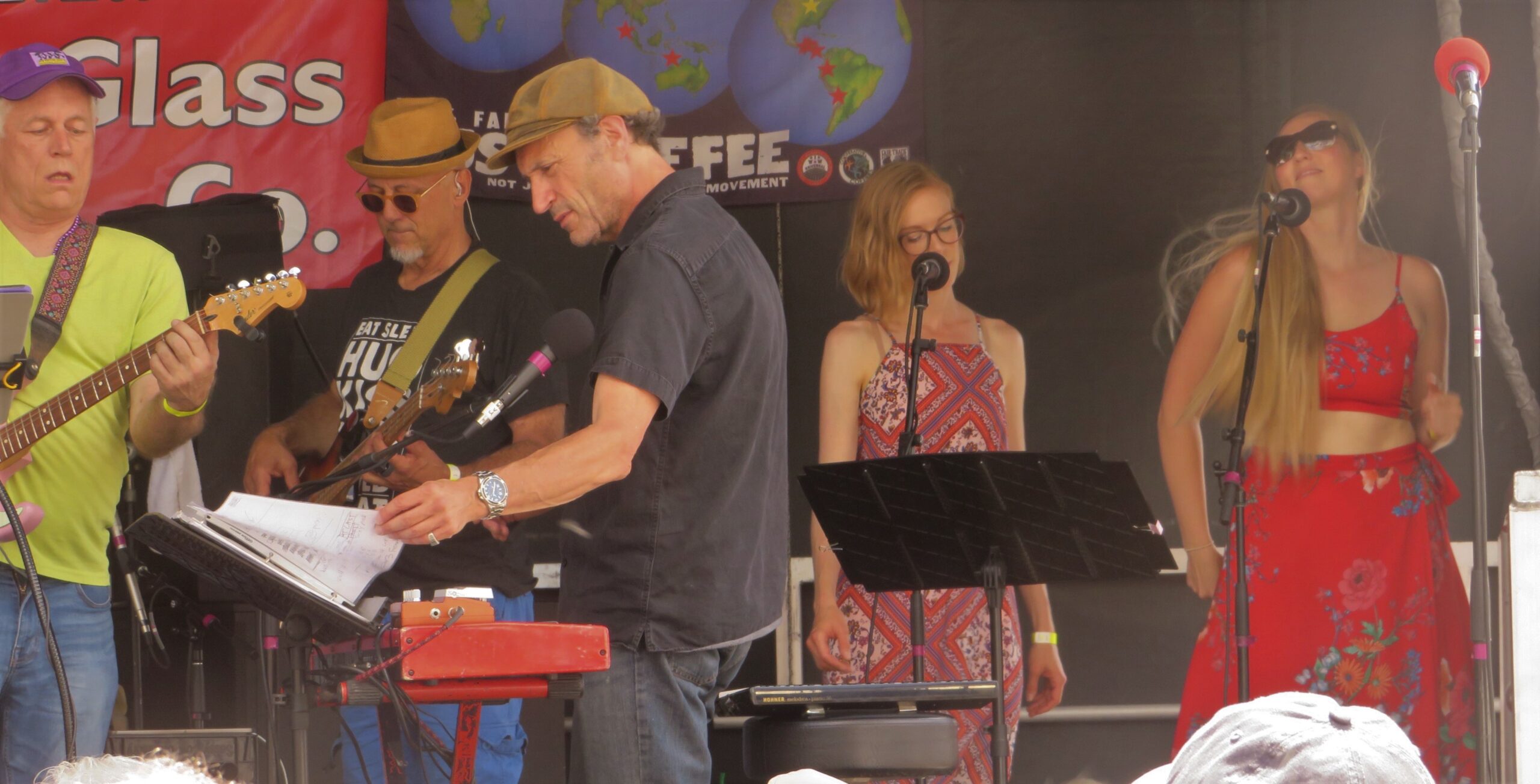 So the effect was that this big joyous big crowd were SD true believers who knew many of the lyrics they sang along with, not unlike biblical verses duly memorized. Except wafting herb, as mentioned, is the substitute for incense. And Steely Dan is as secular as music gets. Steely Dan’s resident genius Donald Fagen crafted songs about love, loss and “the royal scam,” with a variety of intriguingly romantic, roguish and eccentric characters, and even sweeps us back to high school days without seeming corny or trite.

Steely Dane’s frontman Dave Adler’s evident Donald Fagen wannabe-ism has morphed, with diligent practice and zeal, into a Fagen might-as-well-be-ism. As gal pal Ann Peterson commented during the band’s exuberant 90-minute (without a break) set, “If you close your eyes, you can easily imagine that it’s Steely Dan.”

If that sounds like a perfectly ingenuous critical comment, it’s also spot on. This band has taken in, mastered and absorbed what sounds like most of Steely Dan’s repertoire, and they’ve got it down cold, that is to say, cool, but also quite hot, and utterly convincing.

The co-founder of the band, along with Adler, is the accomplished and respected Madison jazz pianist Dave Stoler.  And what a contrast in stage presences. Dave Adler bounces around, flailing limbs like Gumby on steroids. He sings with a kind of please-love-me-to-death ardency. You get the feeling he’d perform ’till he woke up the moon and, remember, this was noon.

By contrast, band co-founder Dave Stoler, studious and nearly immobile, is a Buddha with dancing fingers, yet absorbed in awareness of the musical whole, given that he does the arranging for this big ensemble. He’s previously fronted a full jazz orchestra project. To intro one song, Stoler also delivered an cappella piano solo brimming with extended chords and slowly spiraling substitutions.

Guitarist Jay Moran does his best to muster the bite of Walter Becker’s guitar and ably handles some of the vocals. None of the lead singers quite matches Fagen’s elastic, gut-to-the tongue sass.

But the Dane ensemble is so strong, supple and committed to this material, and with gospel-like call and responses, it plunges into the memory and heart, and mainlines Steely Dan’s “when-Josie-comes-home” nostalgia amid sardonic philosophizing.

Here’s saxophonist-vocalist Al Falaschi, Adler and Moran highlighted in a goes-down-so-easy version of “Do It Again,” recorded at the Pabst Theater in Milwaukee.

Similarly, In this band’s hands, “Aja” still unfolds as a gorgeous little suite, that breathes and arches its back like a big ol’ tiger. The “up on the hill” refrain has strong spiritual overtones, but mainly about social acceptance, and consolidation. “When all my dime dancing is through, I’ll run to you.”

By contrast, “Reeling in the Years” allowed listeners to dance way out on the memory line, with all the euphoria that caught everybody’s ear when Dan first hit the charts. The Dan-by-way-of-Dane waves of slithering funk is too delicious to deny, and you sense this is as good as it’ll get – especially given that the real Steely Dan rarely toured live, being largely a recording studio creature, as gleamingly brilliant and contagious as those got with hip, R&B-jazzy song jammin’. 1

During a short stint in the 1970s, I worked at the North Shore Milwaukee audio store Sound Stage, and SD’s masterpiece album Aja, was our favorite demo record, to show off the equipment. You see, the album’s production level, with Victor Feldman’s souped-up marimbas like tolling redwoods, is about as high as the music can get you. It felt about that way Sunday, as high noon unfolded into the after’s Mary Jane-filled glow.