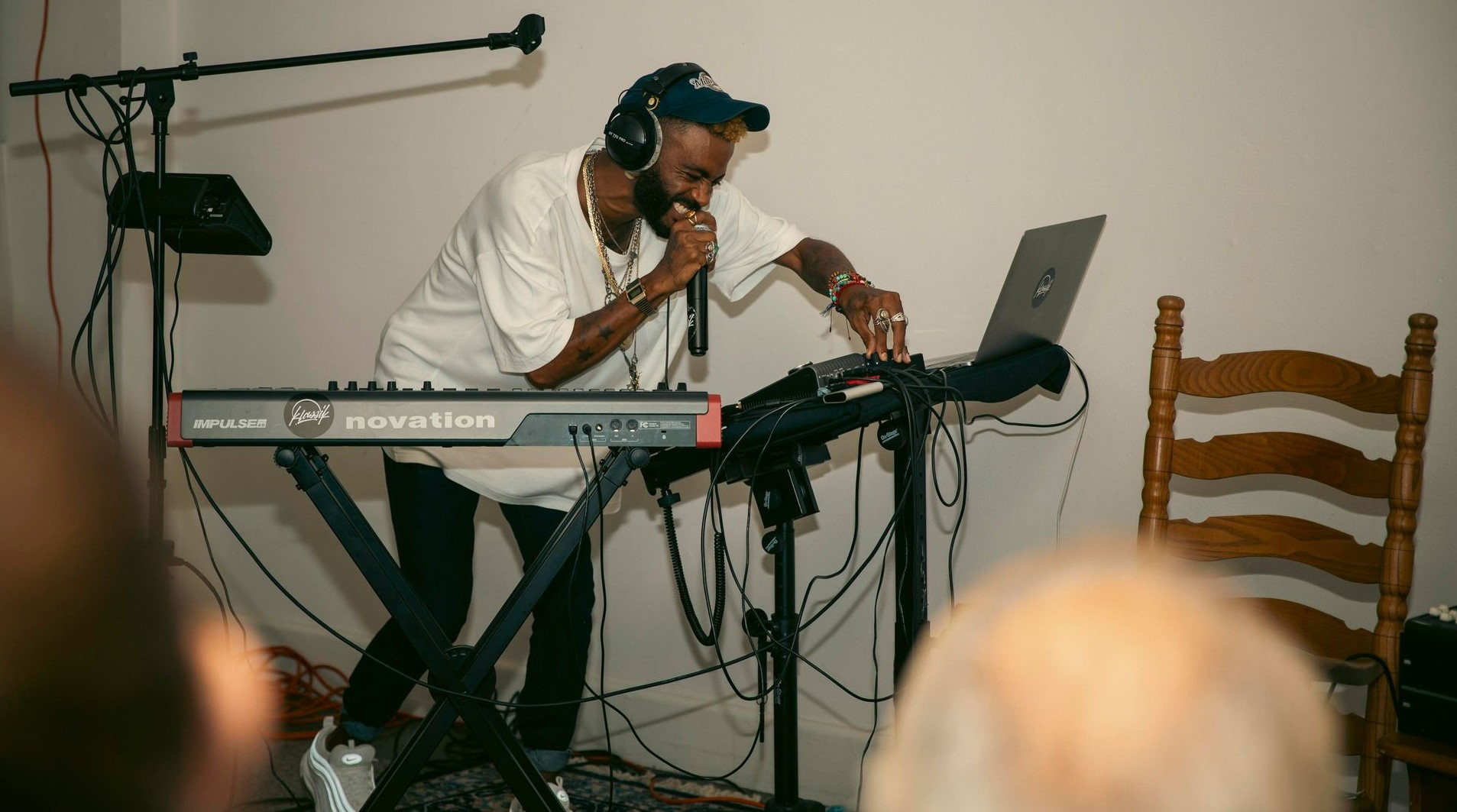 Klassik demonstrates how he blends a wide array of sonic and instrumental enhancement of his singing and rapping, here at an event at the forMartha wellness center on Center Street. All photos by Samer Ghani

Though it happened a week ago, this event still thunders through my memory, like a bolt of lightning across the Milwaukee skyline.

Because I’ve written in some depth about the book it celebrated, I’ll try to be quick, too. But I wanted to share some photos by Samer Ghani, of author Joey Grihalva’s reading and performance event with Kellen “Klassik” Abston, at the end of the recent Center Street Daze, last week.

The setting was unassuming, the new storefront forMartha, a wellness center on Center Street. Grihalva read from his new “biography-autobiography” The Milwaukeean, which is ostensibly a biography of his friend, hip-hop rapper-singer-songwriter-keyboardist Klassik. (The book is available at some retail outlets in Milwaukee, or directly from the author, who provides free shipping, here: https://www.joeygrihalva.com/product/the-milwaukeean )

Yet, including an array of wise-before-their time city voices, the book’s story amounts to a slightly oblique, thirty-something-crafted portrait of Milwaukee itself, which Klassik ingeniously thinks of as a “character” as much as a place. (Grihalva and Abston are close in age and friendship.) You see, Milwaukee wears the faces of countless young Black men with comparable personal stories, rife with tragedy, who grew up, lived and died, before their time.

And yet, Kellen Abston has survived, and finally begun to thrive, through simple twists of fate, spiritual will and a wealth of talent.

So, Grihalva, author of the pictorial history Milwaukee Jazz, has fashioned a story that reverberates closely with the heart of Abston’s daunting personal odyssey, ” A Tale of Tragedy and Triumph,” the book’s subtitle.

Here’s my previously posted review of the book:

At the reading/performance Grihalva also played recorded interviews that didn’t all make it into the book, including an extended interview with Milwaukee singer Adekola Adedapo about the “discovery” of a young Kellen Abston at a Heath Brothers jazz workshop, where the 10-year-old wowed people with an extended version of “Over the Rainbow” on saxophone. 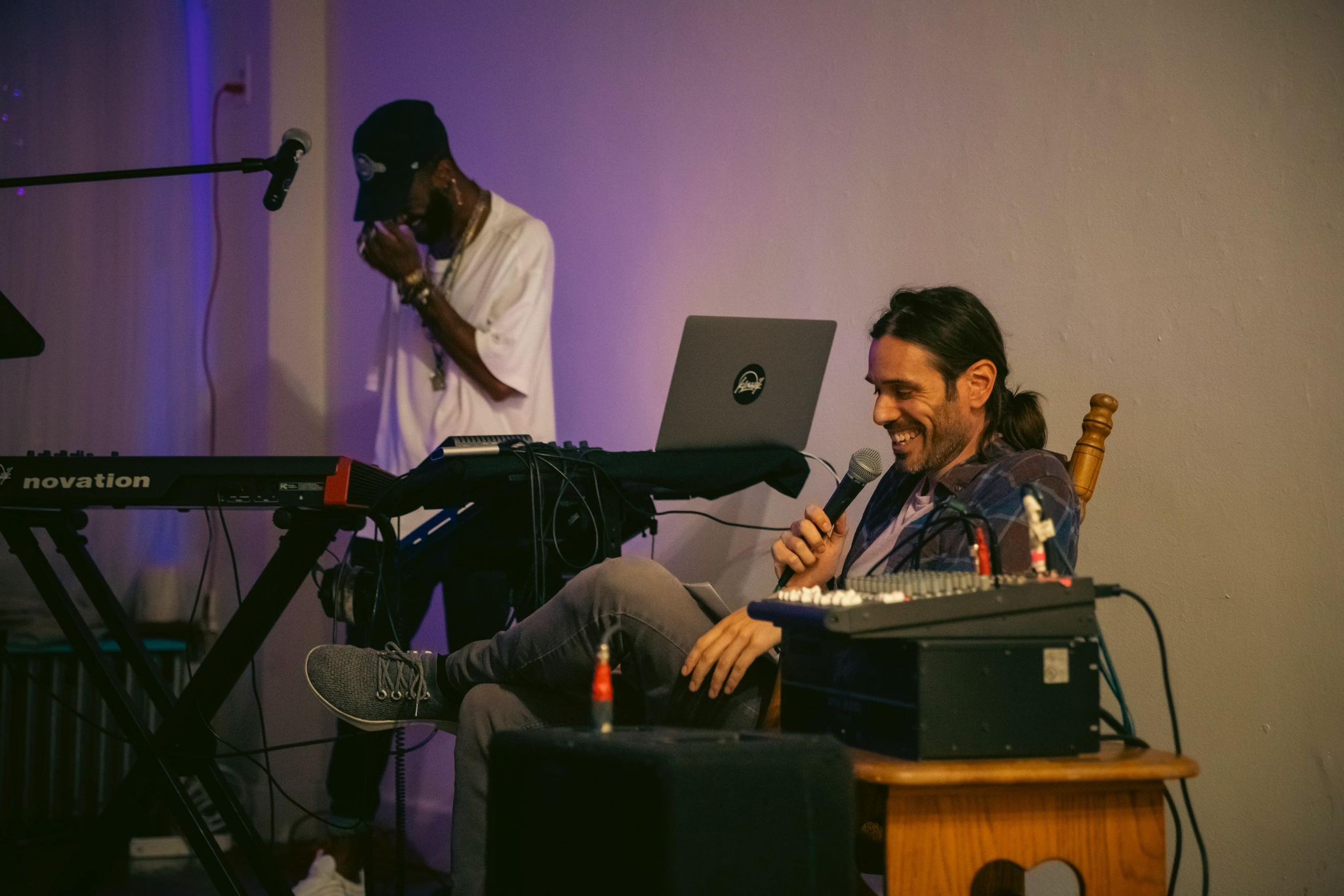 Klassik and author Joey Grihalva share a light moment during their reading and performance event for the publication of Grihalva’s book about Klassik, “The Milwaukeean.”

This event alternated between book passage readings and Klassik’s performance, a rhythmic flurry of dancing, singing, rapping and electronic sound manipulation, which had an almost electrifying effect in such a small space, his voice often ranging into a gripping falsetto. At one point he sang “Not till everybody’s free in your mind…freedom has a price!”

His final untitled song swelled with startling power. At its climax, Kellen reached out repeatedly and implored the intimate audience, “Won’t you lift me up? Won’t you lift me up?” The effect had this listener feeling both the depths and the heights of the singer’s deep emotional cavern. I wasn’t alone. Afterwards, one burly, bearded man walked outside, leaned back against a car and said, “I almost came to tears.”

Klassik said he had written the song on July 4th, and this was its debut performance. One thinks back to Frederick Douglass’s bitterly eloquent public speech on July 4, 1875. It was a portrayal of the American Dream and its Constitutional ideals, betrayed by slavery and racism, Yet the speech also combined a despairing view of the political climate with criticisms of the black community and appeals for blacks to improve themselves.

Klassik, for his part, now strives “to make something beautiful,” in sunlit defiance of the shroud of ugliness and hatred that still haunts America.

Sometimes, in his effort “to make something beautiful” his voice cuts through black clouds of pain, soaring so high as if he might “kiss the sky.” And then come down like a bird, floating, winged by triumph.

Klassik is now busy preparing music for live performances to accompany Milwaukee Chamber Theater’s play Where Did We Sit on the Bus? running Sept.30 to Oct. 23. 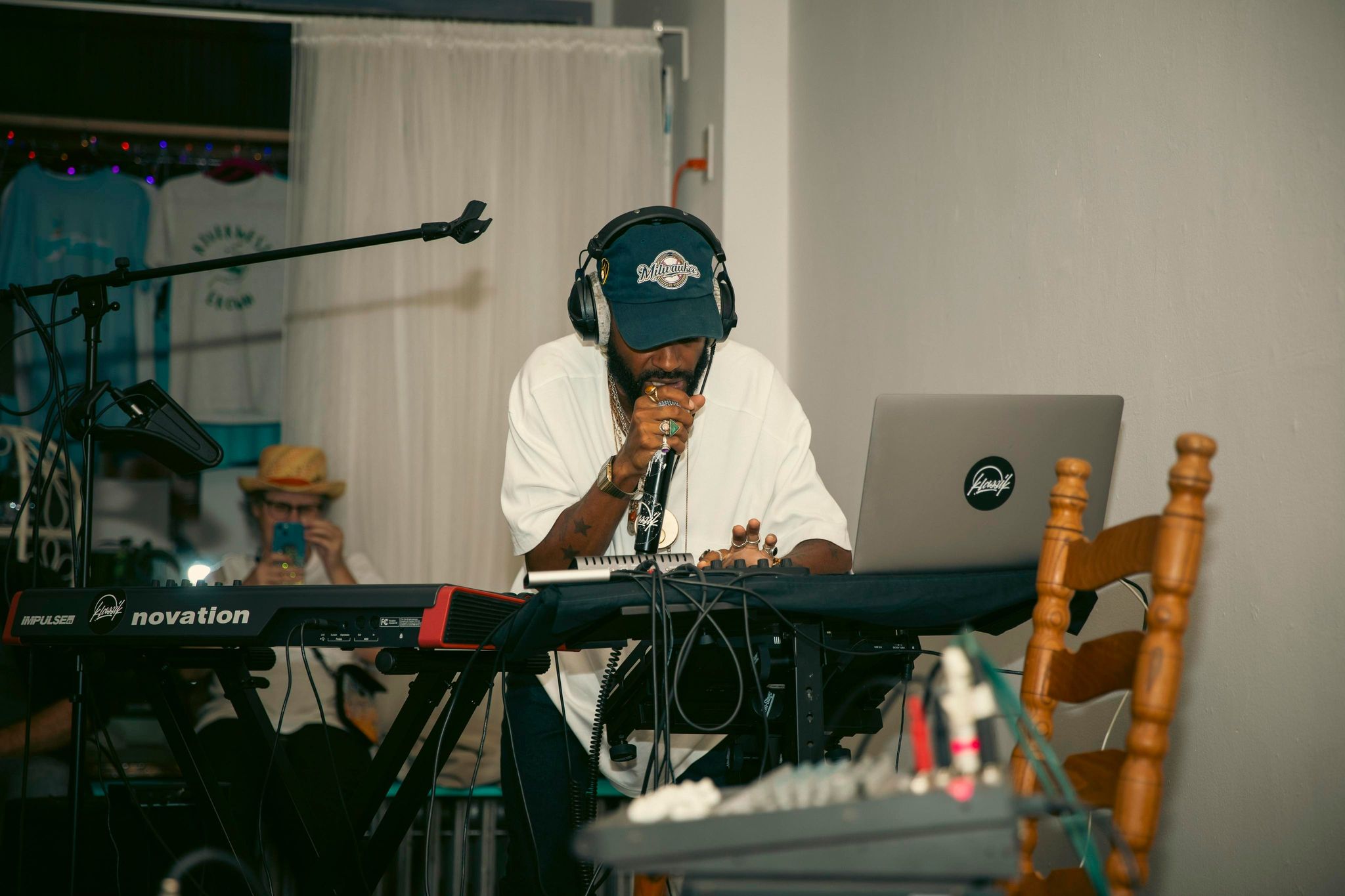 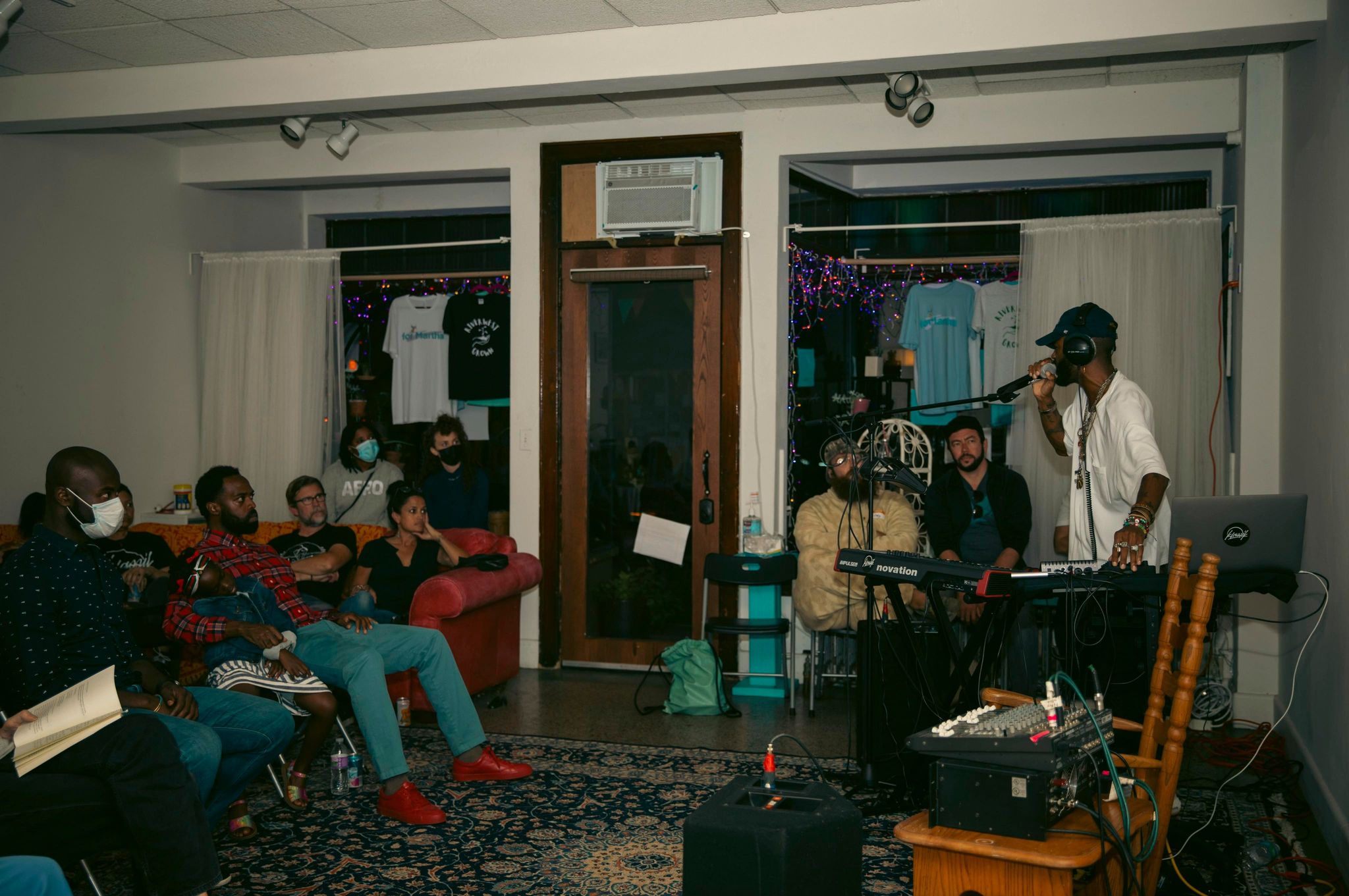 At times, Klassik connected powerfully with his intimate audience at forMartha wellness center.