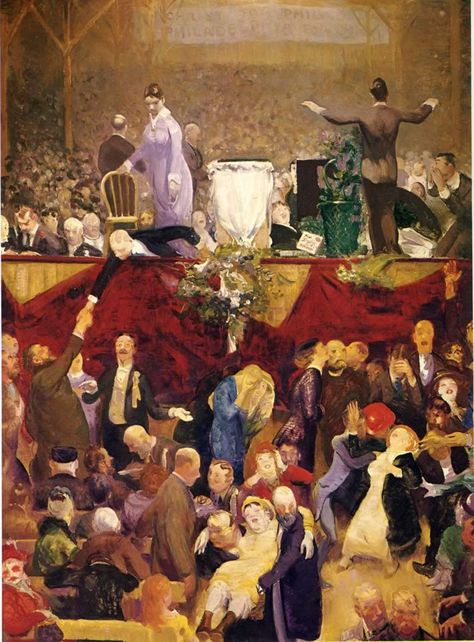 Notice: I’m reposting this review because I chose a favorite John Sloan painting of mine for my new Culture Currents blog theme image, the night-time image (at top). This Sloan painting “Six-O’Clock, Winter,” (1912) is not in the Milwaukee Art Museum show. But imagine it’s rush hour in early January in 1912: You enter a marvelous (if somewhat romanticized) evocation of the dynamic, roaring, rattling vitality of New York City’s El system, dominating mass transit (having begun in 1868), as the city grew exponentially into what we now call The Big Apple.

However, the great painting by George Bellows (above) “The Sawdust Trail,” (above) is in the show, part of the museum’s permanent collection (detailed in the review linked below). All works are from the MAM’s still-growing permanent collection of the Ash Can School. Especially rewarding are the many John Sloan graphic art prints. There’s more than enough that’s well worth seeing.

Try a New Year’s resolution, to get down to this magnificent cultural facility and see some of Milwaukee’s artistic riches.

THIS EXHIBIT RUNS THROUGH FERUARY 19. It’s a great tribute to the artwork in the MAM’s permanent collection, and superbly curated. Speaking of visual art, The Ashcan School was “the first American art form.”

Here’s the link to my in-depth (illustrated) review: