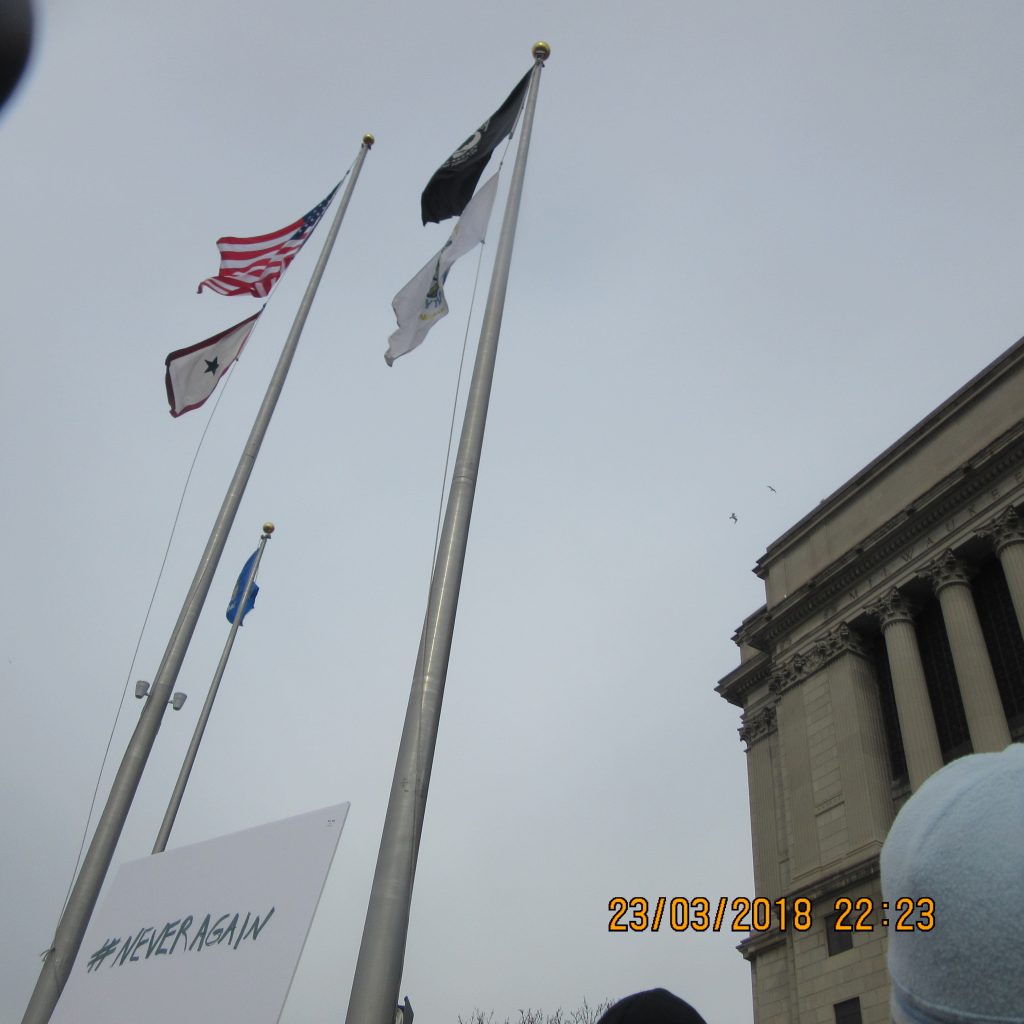 Never again! (#Never again). Sing it out high and loud to the heavens.

“Come senators, congressmen/ Please heed the call/ Don’t stand in the doorway/ Don’t block up the hall… There’s a battle outside/and its ragin’.  / It’ll soon shake your windows/ and rattle your walls/ For the times they are a changin’.” – Bob Dylan

Two baby boomer-age women, among thousands, marched down State Street to the fiery cadences of one of Dylan’s greatest protest songs emitting from a portable player one held. The other woman brandished a harmonica to play along. It was one of many ingenious ways in which people put on a March to Save our Lives from the bloodstained peril of a nation with more guns than people.

It reminded me of how potent Dylan’s song remains. Concurrently, in Washington D.C., reportedly 800,000 gathered in the largest single protest in the nation’s history. And a highlight of that event was soul singer Jennifer Hudson singing “The Times They Are a Changin'” along with a gospel choir and the talented drama club and choir of Marjorie Stoneman Douglas high school in Florida, where the assault-style gun killing of 17 of their classmates has spurred an amazing movement for sane, common sense gun reform.
Hudson cranked the song up to a fever and impassioned pitch – gun death and violence has ravaged her own life. So Dylan’s great anthem met one of its greatest interpreters, 55 years after he wrote and recorded it.

As for the young speakers, they said plenty. But what struck me was how well they made the connection between mass shootings and the countless shootings and death in individual incidents that may or may not make any news, but continue with numbing regularity for the communities afflicted. So the death of Dontre Hamilton, a mentally troubled Milwaukee black man awoken from his sleep in Red Arrow Park  — and killed with a volley of police bullets after a brief struggle with an officer — was addressed several times.

A connective point is that, along with institutional racism, the profusion of guns in America makes police officers exceedingly paranoid, even though their subjective “feared for my life” rationale is way too easy to corrupt their rationale, after the fact. That easy way out for a cop slaughtering an unarmed black man or boy is part of the institutional racism, of course. But the tons of guns completes the tragic circle.

For my part, here’s a photo essay on Milwaukee’s march, one of 80 across the country Saturday, with many more protests marches around the world in solidarity with America’s gun dilemma. 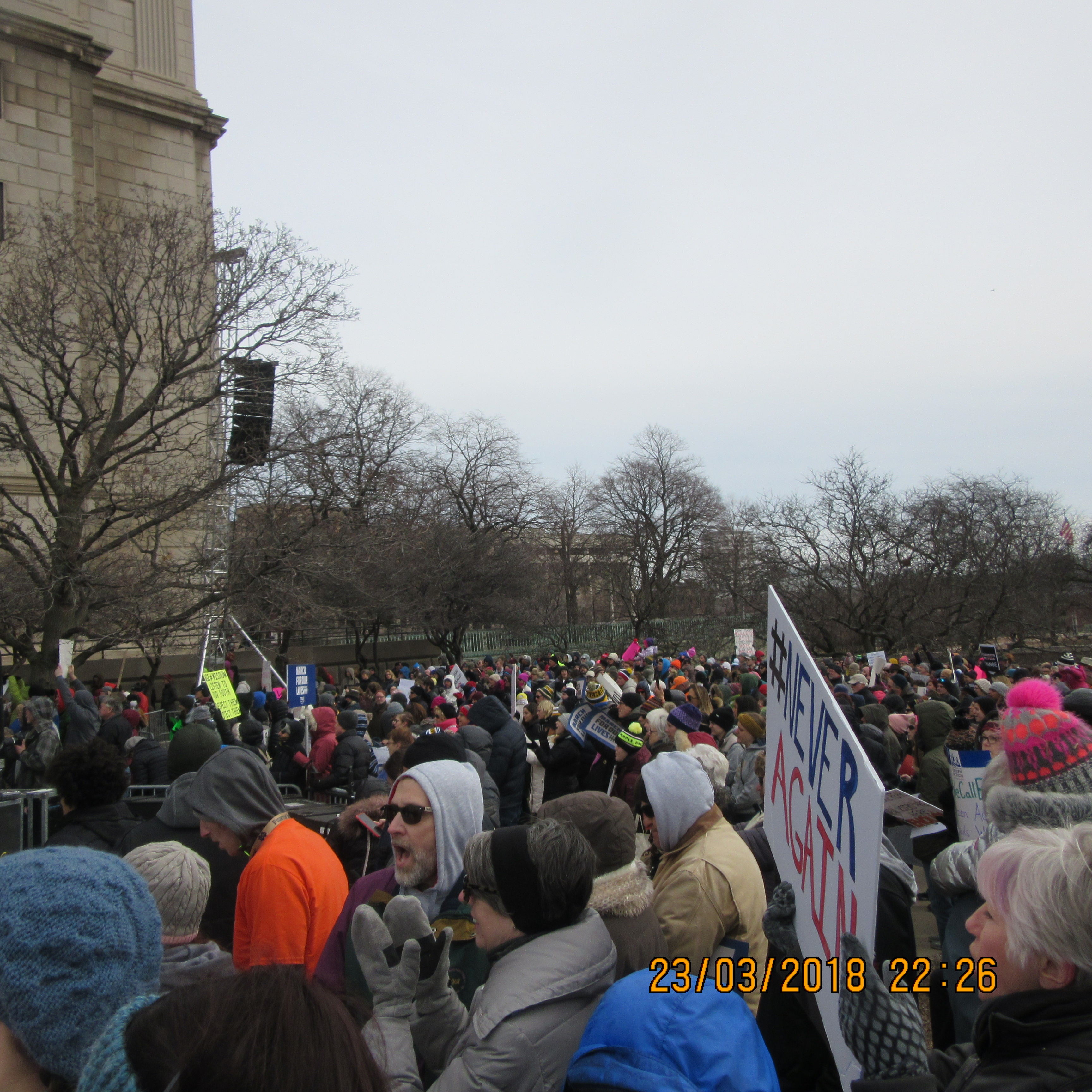 A huge and fiery crowd engulfs the Milwaukee County Courthouse; well, at least up to its ankles. 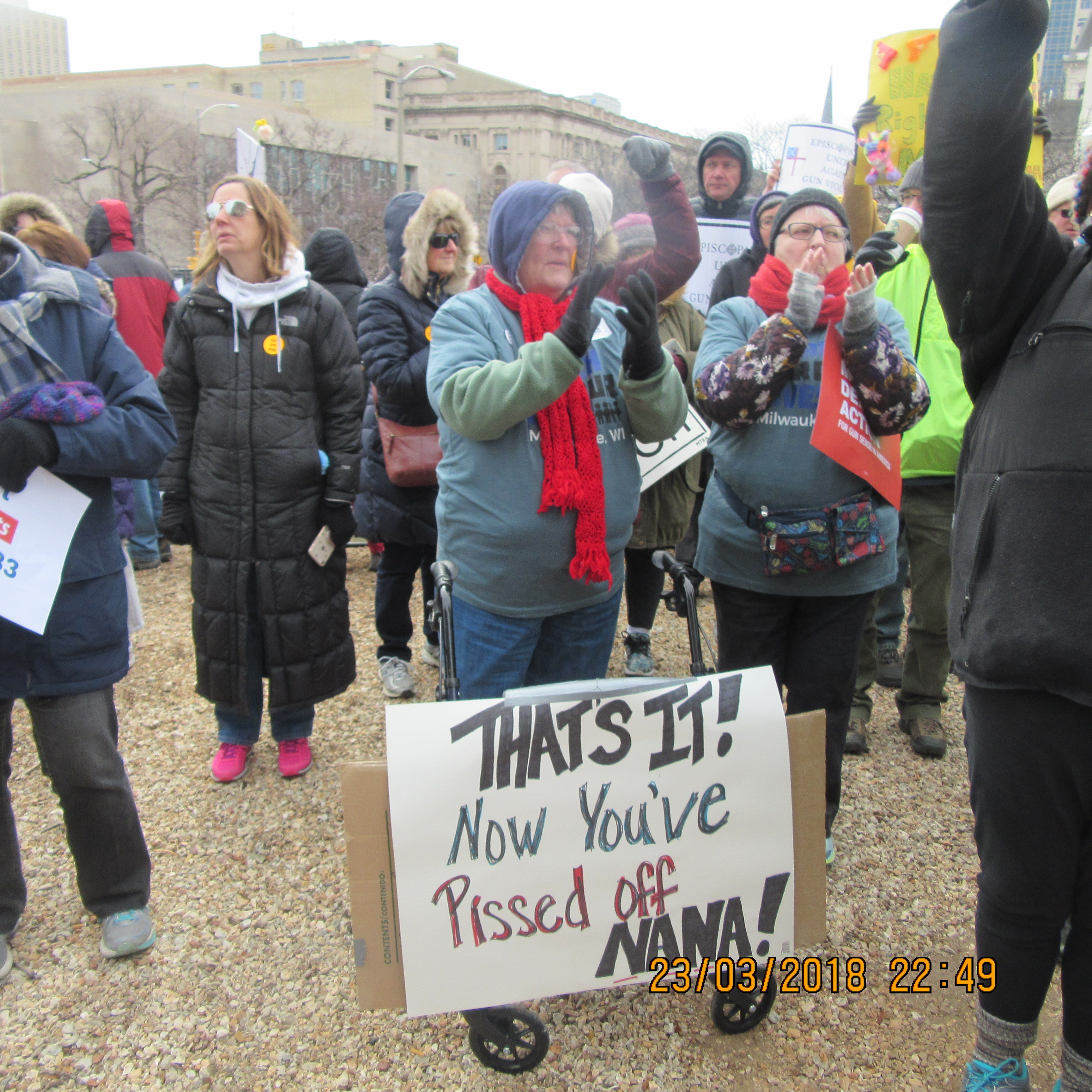 A senior citizen with a walker climbed up the hill to the courthouse, and let ’em know what she feels about America’s outlandish indulgence for guns — the worst kind of guns, that kill masses of people, senselessly, needlessly. Yes, she’s pissed off. 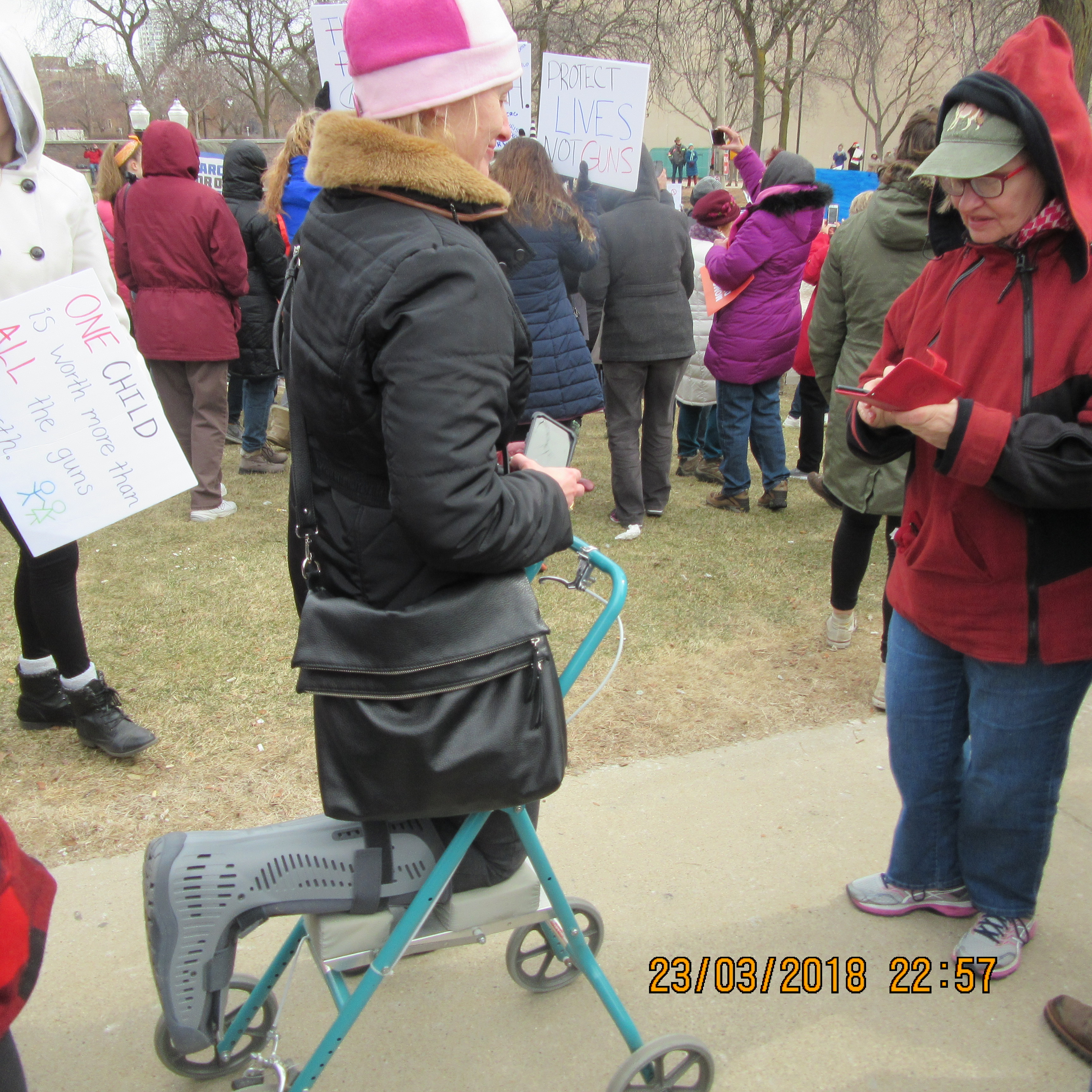 Another marcher who would not be denied was a woman with a broken ankle. 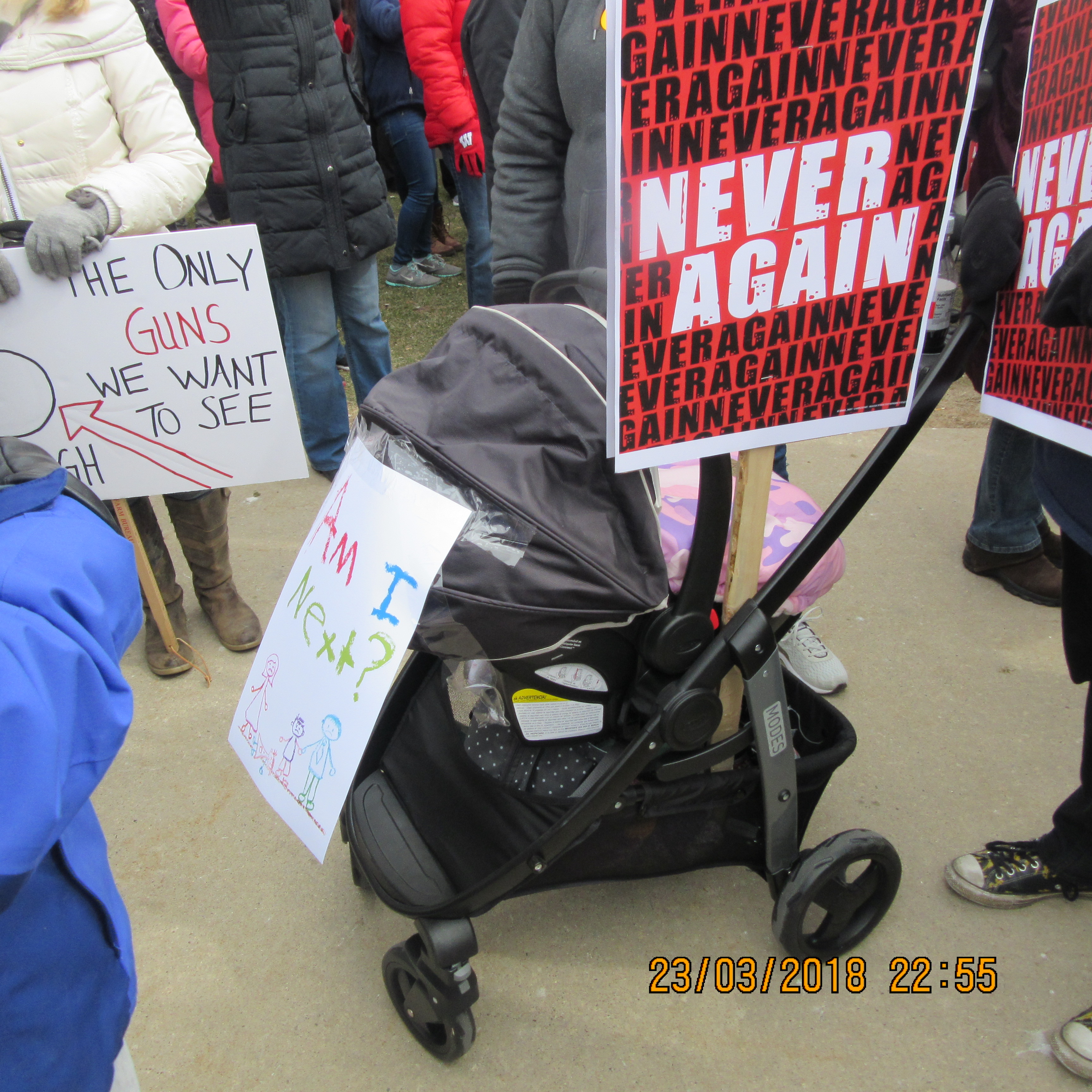 An infant was used as a prop, but it was starkly effective as a protest. 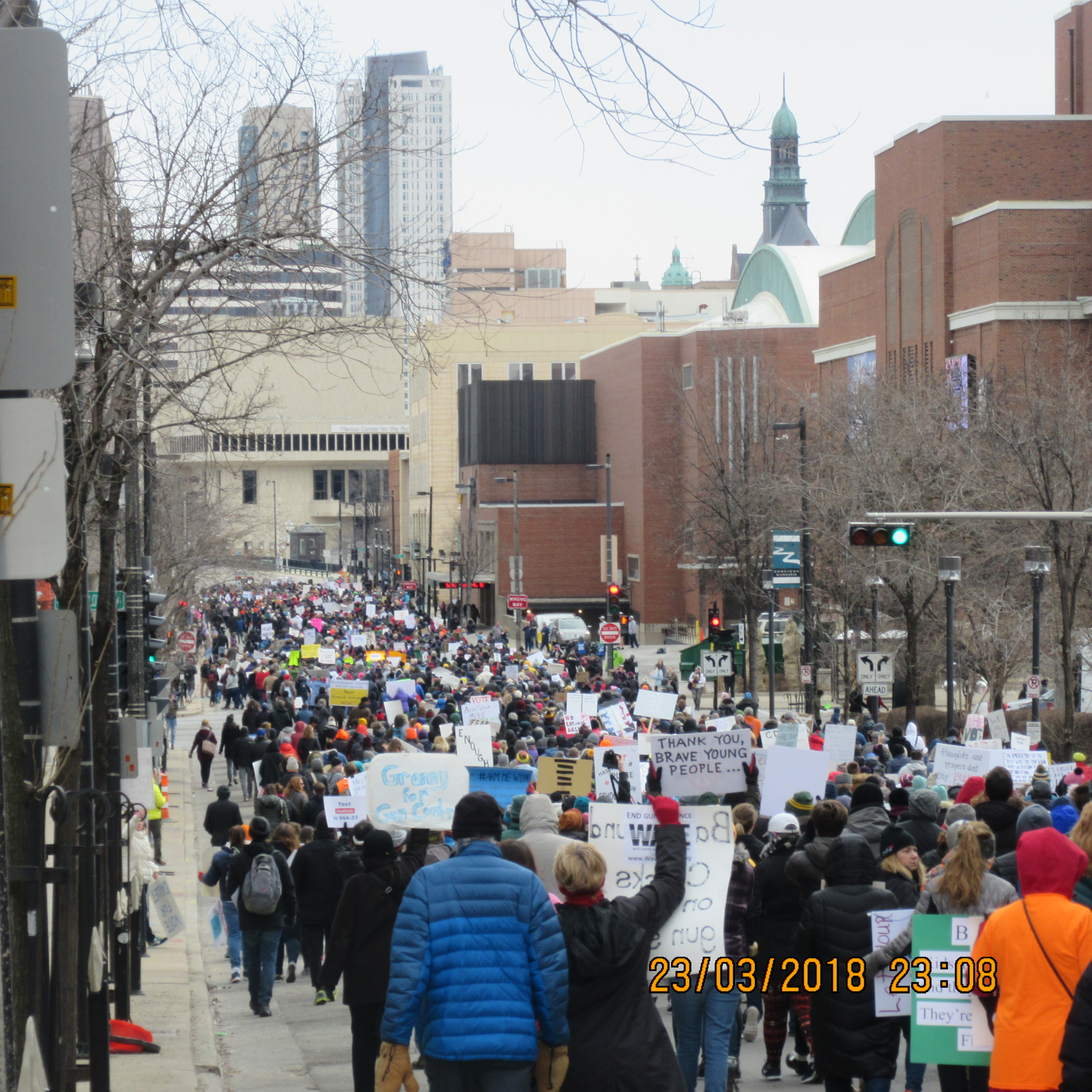 A big march crowd on State Street, stretching from 9th Street all the way to Water Street,  seemed to have no end. 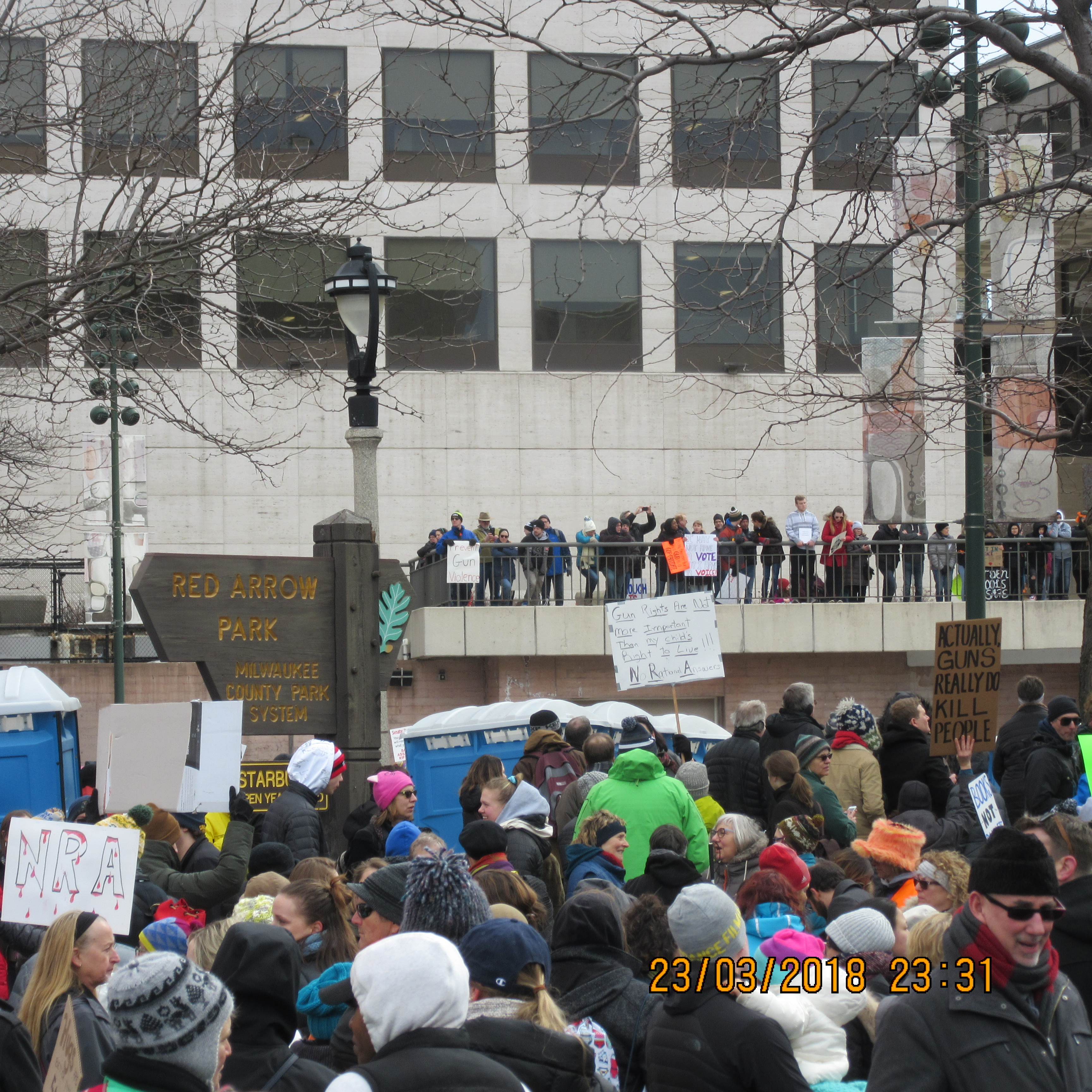 The destination for the march was Red Arrow Park across from City Hall, a popular gathering place but also infamously the scene of a police gun killing of an unarmed black man, Dontre Hamilton. 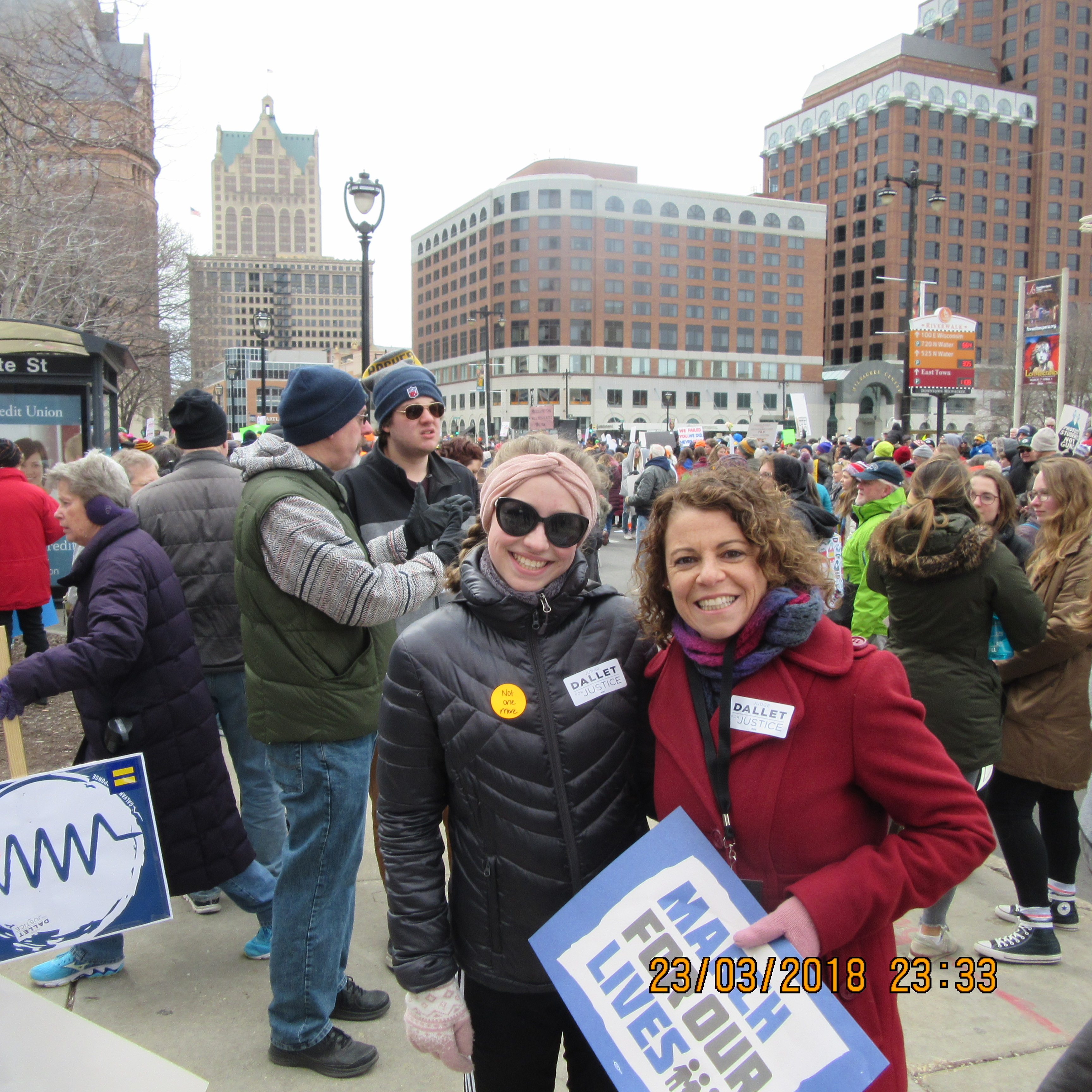 Judge Rebecca Dallet (right) joined the protest and did a little in-the-crowd campaigning for her bid for a state Supreme Court seat, in the April 3 election. 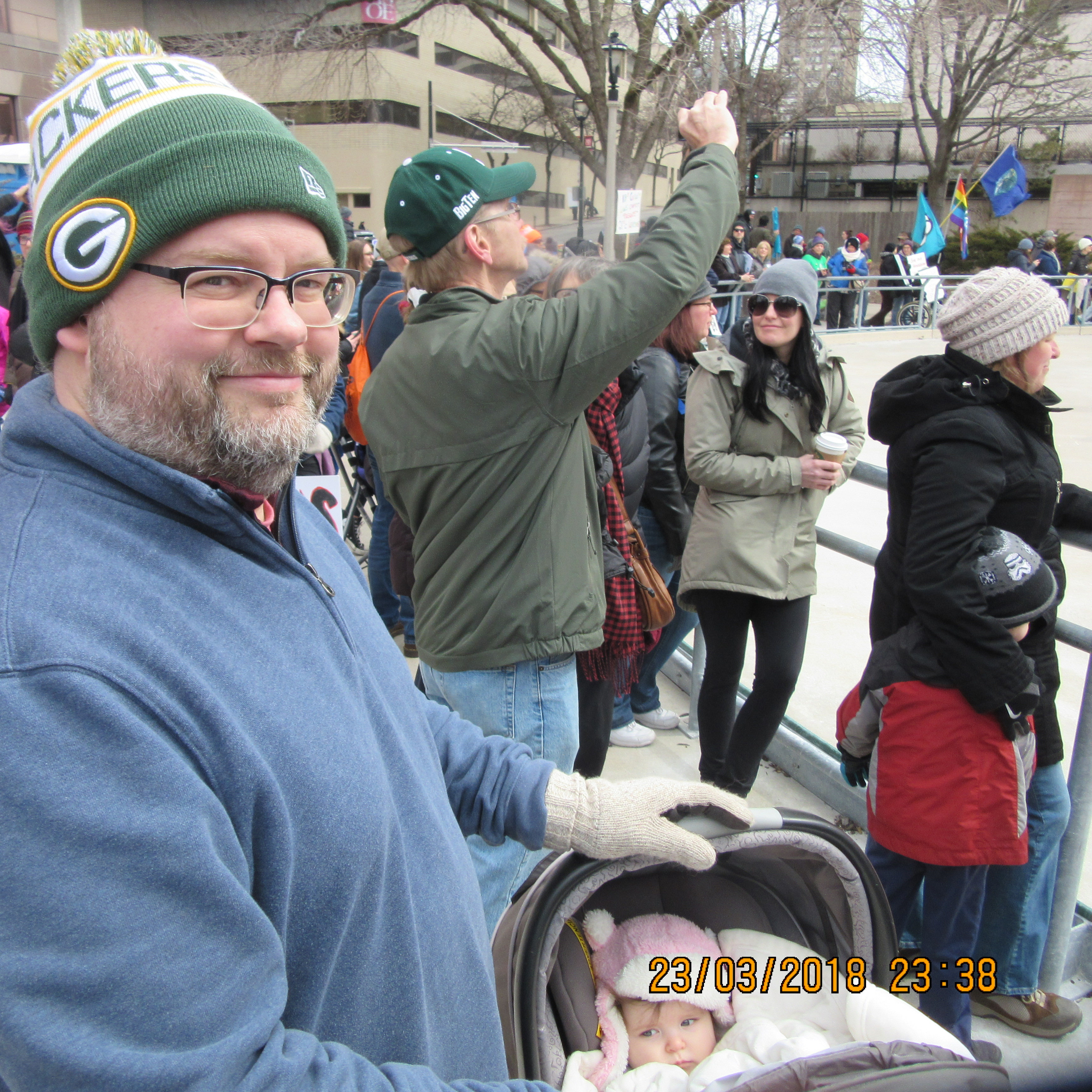 The proud father of a six-month-old girl (below in the buggy) wants her to grow up without needing to fear for her life when she goes to school. 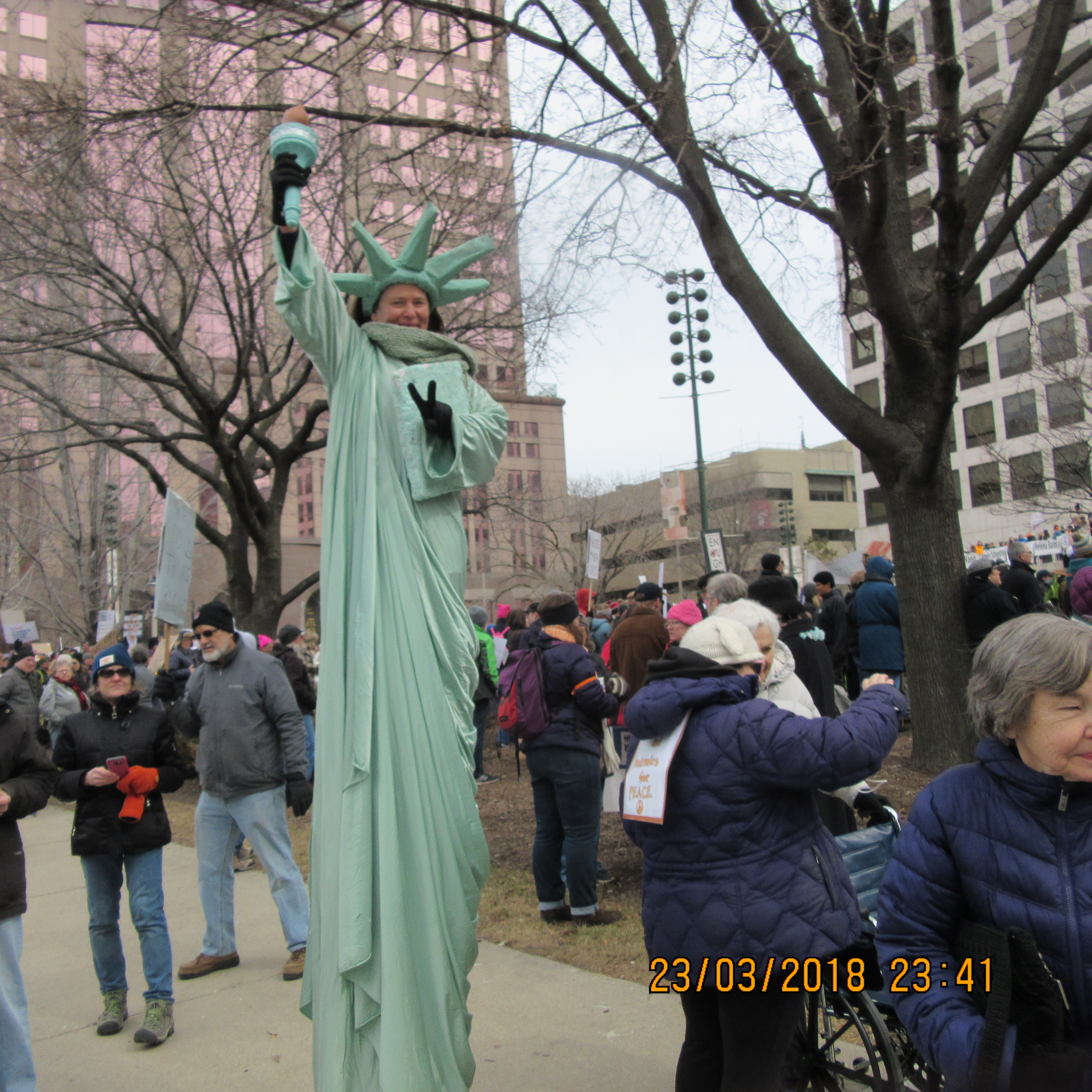 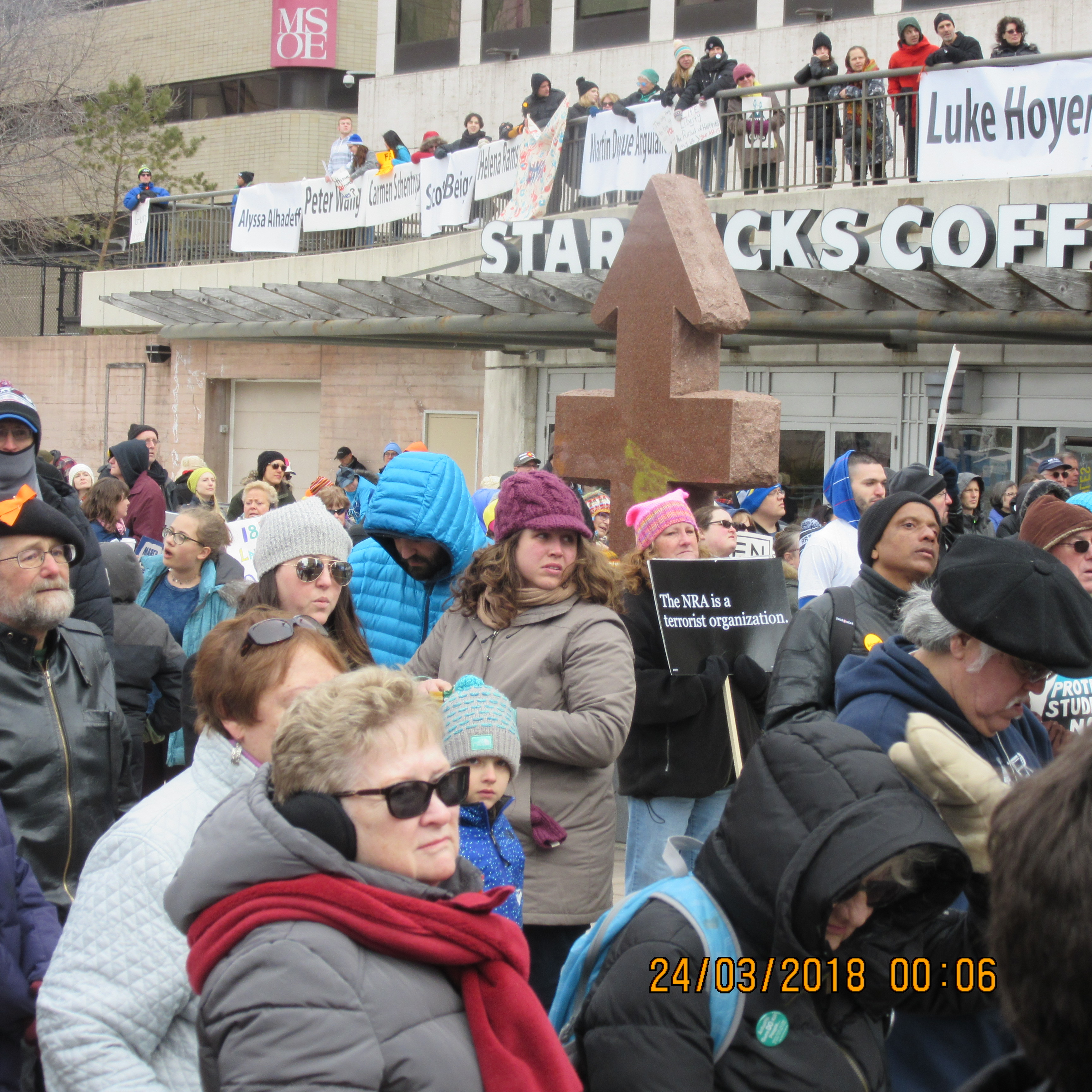 The crowd listens to an impassioned, spontaneous speech for gun control, with an emphasis on “love,” by a man in the crowd near the podium. 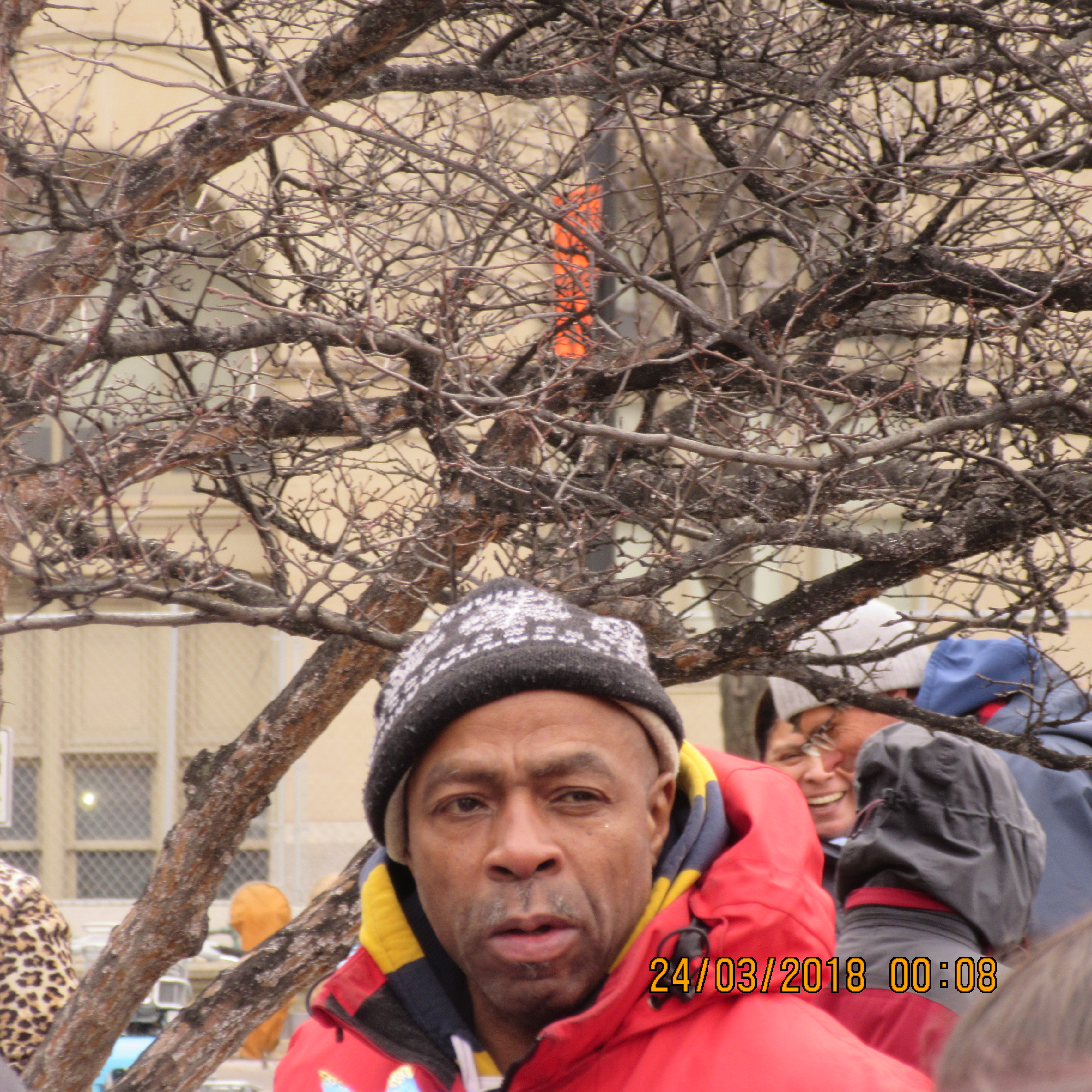 Here is the man who had plenty to say, despite not being among the invited speakers. 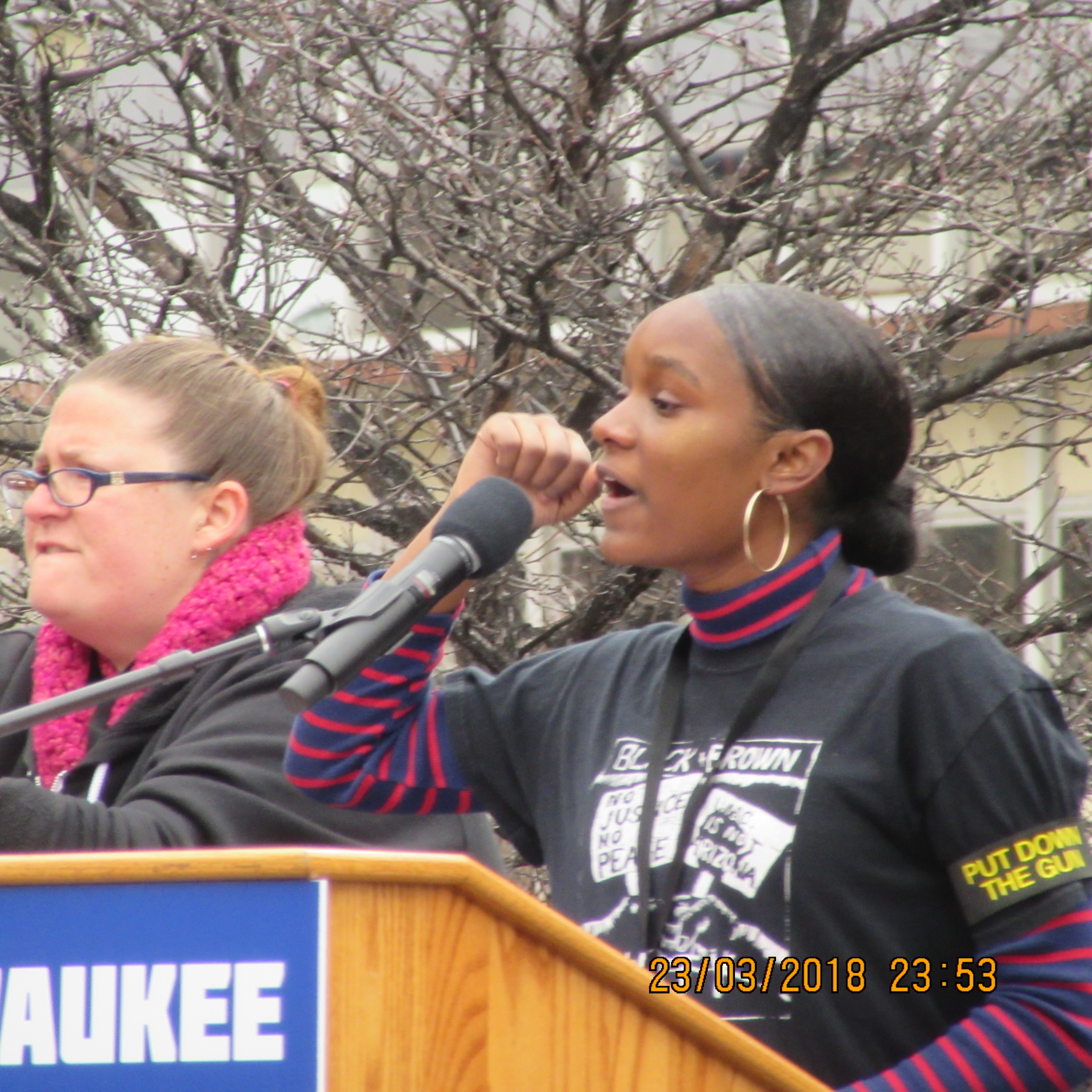 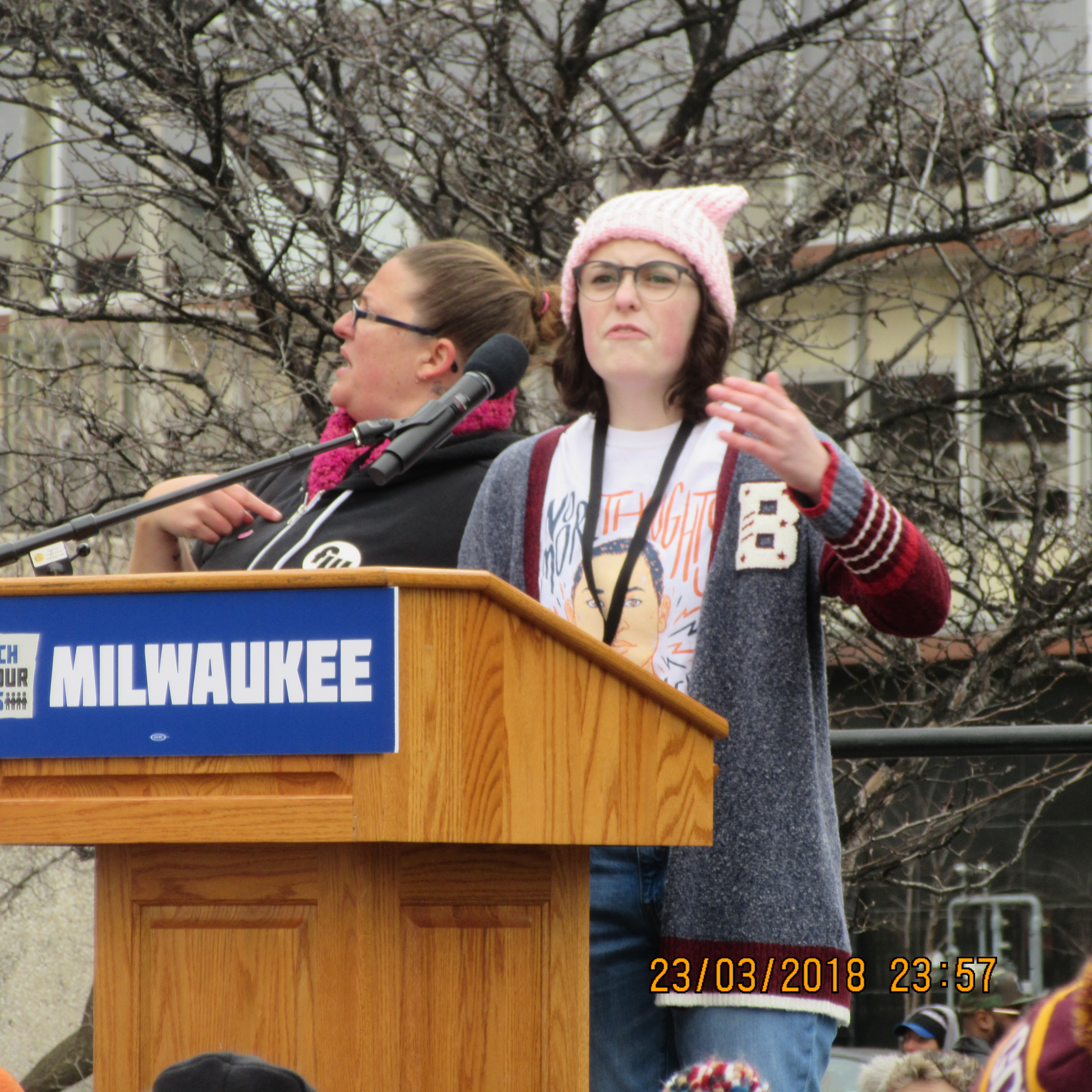 These two high school student speakers wore their hearts n their sleeves, and are part of  a new generation of activists who, we hope, makes a transformative difference in gun control. 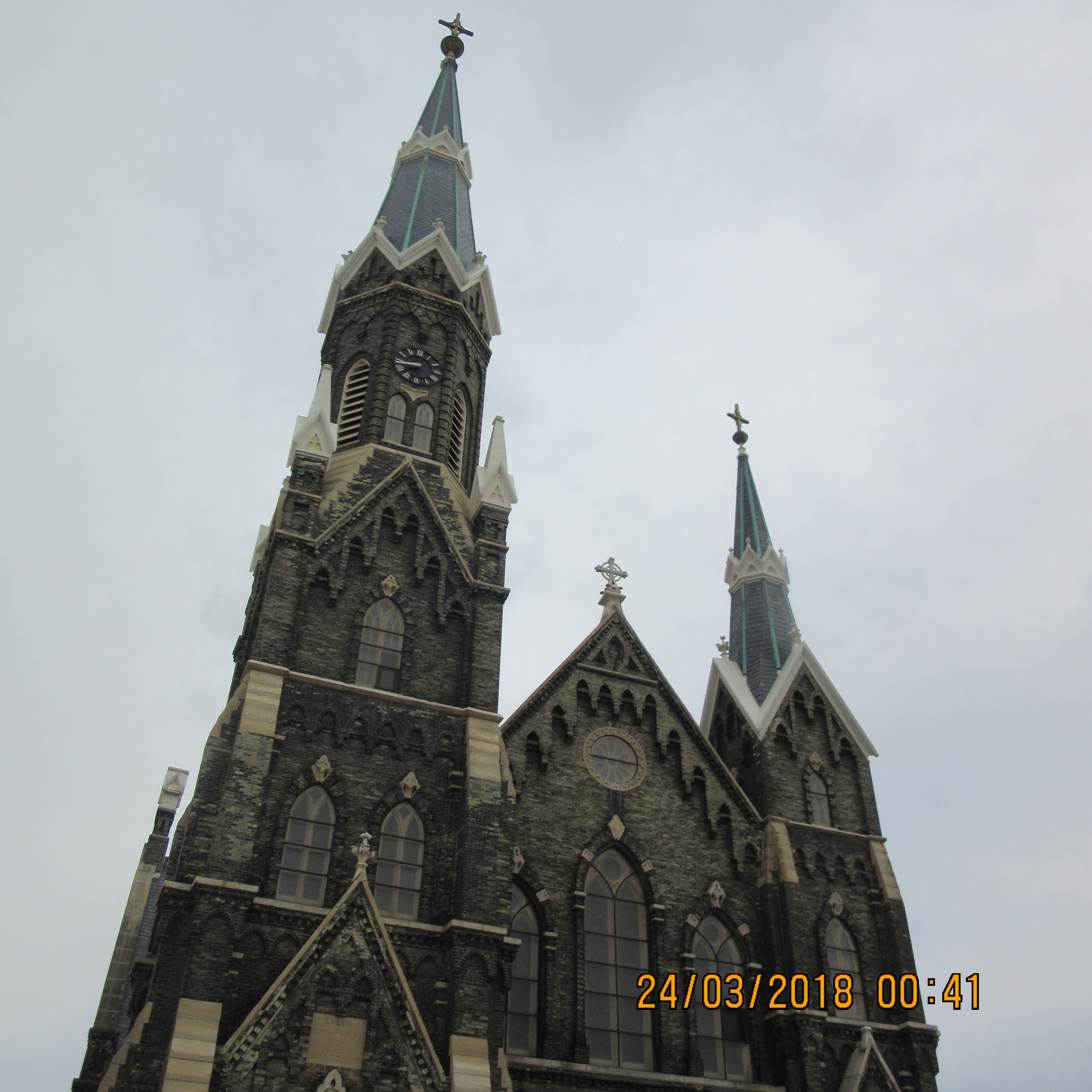 On my way back from the march, I noticed the stately old Trinity Evangelical Lutheran Church, described on its website as a” conservative, caring” congregation. It was built in 1878 of cream city brick, which is deteriorating, but the back side is undergoing restoration work. As with my first photo at top, of the flags and “never again” sign, and we often look to the heavens for answers. What does this conservative congregation care about? One hopes, life and sanity over guns.

All photos by Kevin Lynch