In this YouTube video, Cecil Taylor, at 80, performs solo at the Perugia Jazz Festival in Italy, 2009. The ensuing 1984 video is also well worth experiencing, including his poetry recitation and dancing.

The news pains my heart like a plunged lance with a thousand blue-noted edges. Those are the sorts of notes that Cecil Taylor wielded in any given performance over his incomparable career. My second impulse is to not believe that he has passed at 89.

That’s because, if ever a musician broke through the “mask” that Ahab decried of Moby Dick’s inscrutable forehead –to understand the mysteries on the other side – it was Cecil. His energy and organic realm of soul and structure allowed him to deeply penetrate music and possibility, but also to build a fortress with wings — a weird image, yes, but he was at once of this earth and ever rising and falling, a Prometheus who would never simply acquiesce to physical death.

Writer Howard Mandel reported his passing to the other side, with his concise appreciation, expanded on in the major segment of his book Miles, Ornette, Cecil, an essential study of jazz modernism at its most personal and embracing. Elder pianists as diverse as Erroll Garner and Thelonious Monk were big Cecil Taylor fans. Yet perhaps the great belle lettrist of jazz journalism, Whitney Balliett, said it best, as Mandel quotes him: “…Cecil Taylor wants you to feel what he feels, to move at his speed, to look where he looks, always inward. His music asks more than other music, but it gives more than it asks.”

Keep that desire in mind as you listen to Cecil or watch him on a video. His desire to connect was as overt as the most pandering Kenny Gs of the world. And yet, for the profusions of the dippy saxophonist that might ostensibly connect him to Taylor, they’re worlds apart. If you have the open-mindedness to enter Cecil’s world, you’ll feel it and likely be moved, perhaps in unexpected ways. So it’s unsurprising that  The World of Cecil Taylor was the title of his earliest albums.

On that recording, he came out swinging in his own way, yet he moved deeply in the jazz tradition. Listen to him trading fours with drummer Dennis Charles on “Air,” the first tune on The World of Cecil Taylor – the sharp, swift interplay sounds like Muhammad Ali in his prime, shadow-boxing with himself. As annotator Martin Williams notes of the album’s second interpretation of a jazz standard (preceding “Lazy Afternoon”): “Cecil transforms ‘This Nearly was Mine’ into a blue aria. Richard Rodgers wrote the melody for Pinza to sing, and I find it most moving. In this track, Cecil’s ideas and his playing demonstrate strikingly his ability to sing an interpretation.”  1

Speaking of arias and the “brooding air” of another tune on World, I’m sure Taylor would allow my “air” analogy some breathing room. His whirl-over-the-keyboard approach and attack – for its frequent harmonic density and deep, bluesy eloquence – seemed like he was clearing space for the very evident dancer in him to pax de deux with his huge piano. Another album that emerged from the World sessions was titled simply Air. A solo piano recording in mid-career he titled Air Above Mountains (Buildings Within). 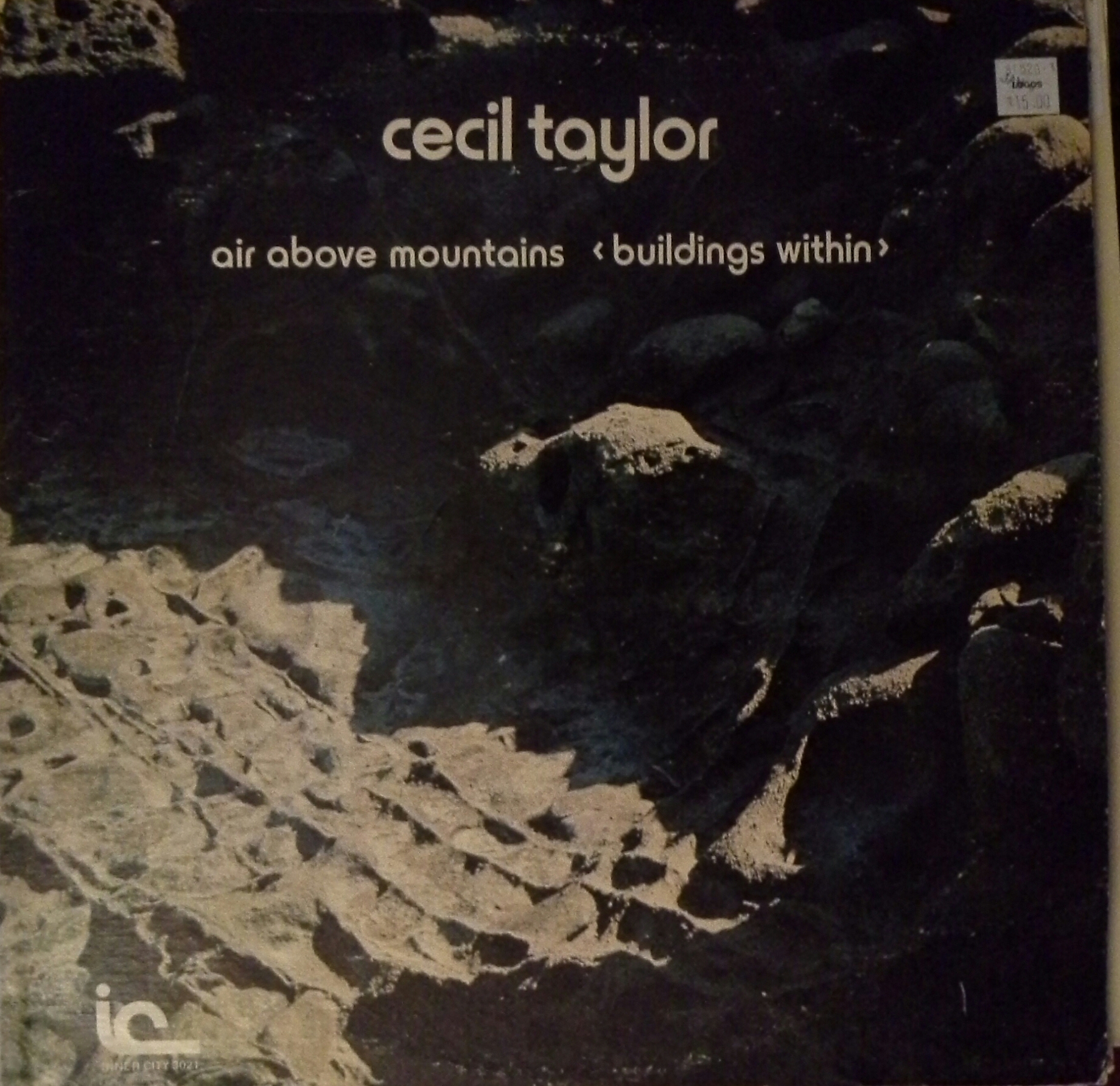 The titles are always significant in Cecil’s music, always poetic, evocative and personal. I risk venturing into literary interpretation because Cecil was a poet of the highest order.

…To his grandest titular haikus: Nefertiti, The Beautiful One Has Come; Fly! Fly! Fly! Fly! Fly!; It is in the Brewing, Luminous; and the brilliant rhythm and momentum of One Too Many Salty Swift and Not Goodbye.

To a word person like me, my breath slips away just to contemplate these titles. This was because Cecil was fascinating to talk to and listen to, nearly as much as his piano playing could “lift the bandstand,” as Monk once put it, and carry the listener to breathtaking heights of vertiginous magnificence. You hung on for dear life to this winged titan of piano creativity and blues power, flying in the face of the fiercest winds. 1

To put Cecil Taylor the poet in literary context, I refer you to the superb anthology Moment’s Notice: Jazz in Poetry & Prose, edited by Art Lange and Nathaniel Mackey (Coffee House Press, 1993). It includes only one of Cecil’s poems, “Garden” (for which he titled two aforementioned albums), but the poem covers a long gust of pages. You see in this book how he fits in to the quietly sumptuous realm of jazz and letters, which dwells largely in silent tongues, unless one opens such a book and reads, and aloud.

Yet to speak personally, I had an opportunity to interview Cecil in 1986 in his home in the Fort Greene neighborhood of Brooklyn, an encounter facilitated by our mutual friend Ken Miller, a Milwaukee modern dancer who was the first person to ever dance with the Cecil Taylor Unit, in the early 1970s, when he was a music faculty member at the UW-Madison. 2

My interview is in the November, 1986 issue of Down Beat magazine, and during the conversation Taylor sat on a rug cross-legged in a Buddah-like posture beside his nine-foot grand practice piano. Utterly gracious, he expounded and reflected, thoughtfully, expansively. He shared with me some of his visions of music, culture and life. The article was titled “Cecil Taylor: The Poetics of Living.”

As per his desire to “give more than he asks,” Cecil purposely situated is mighty grand piano in the bay window of his Brooklyn brownstone, so passersby could readily hear him playing and practicing.

Despite his music’s extreme originality – a fusion of 20th century “classical” music and technique with aspects of African music and jazz from Waller and Ellington onward, and Taylor’s rigorous practicing regimes –  he was the opposite of an ivory-tower dweller. He was a very social being.

The day I interviewed him, he invited me to a party the next day. This was a first, among all musicians I’ve ever interviewed over 35 years. I accepted, and found myself strolling with Cecil through a Brooklyn neighborhood until we got to the apartment of the party, where Cecil dove in and engaged with several partygoers in bracing and animated conversation (as the photos below indicate). 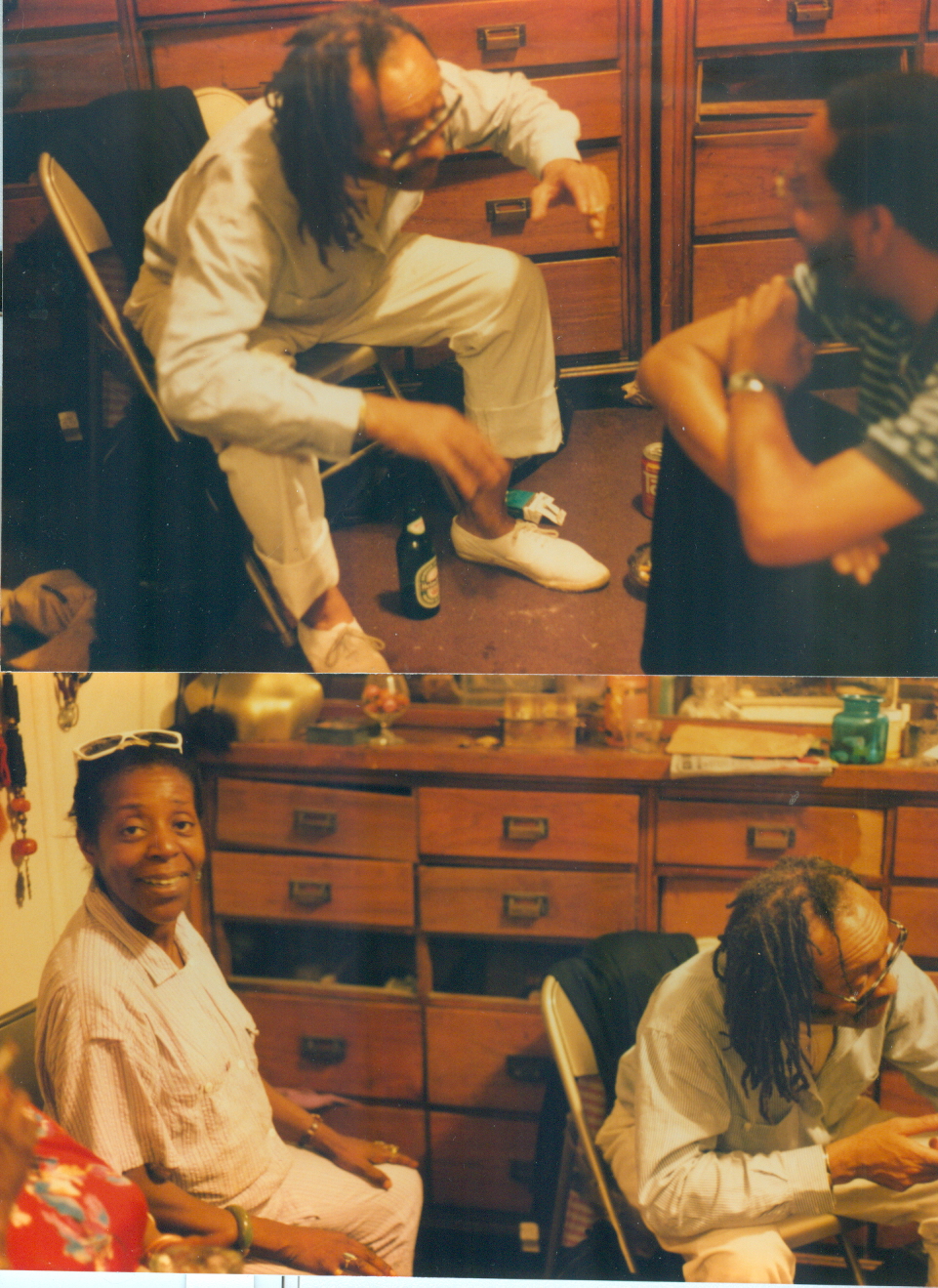 The personal rhythm and musicality of Cecil Taylor is evident in these shots of him at a Brooklyn party. Photos by Kevin Lynch

The following year, Cecil agreed to fly to Milwaukee – merely to visit his friends and admirers there, with no concert paycheck to be had. He came to my Riverwest flat for a dinner prepared by my spouse Kathy Naab Lynch. I was honored when, entering the house, he immediately gravitated to an abstract bronze sculpture of mine titled “Free Space Relief,” a phrase which might describe a Taylor composition. 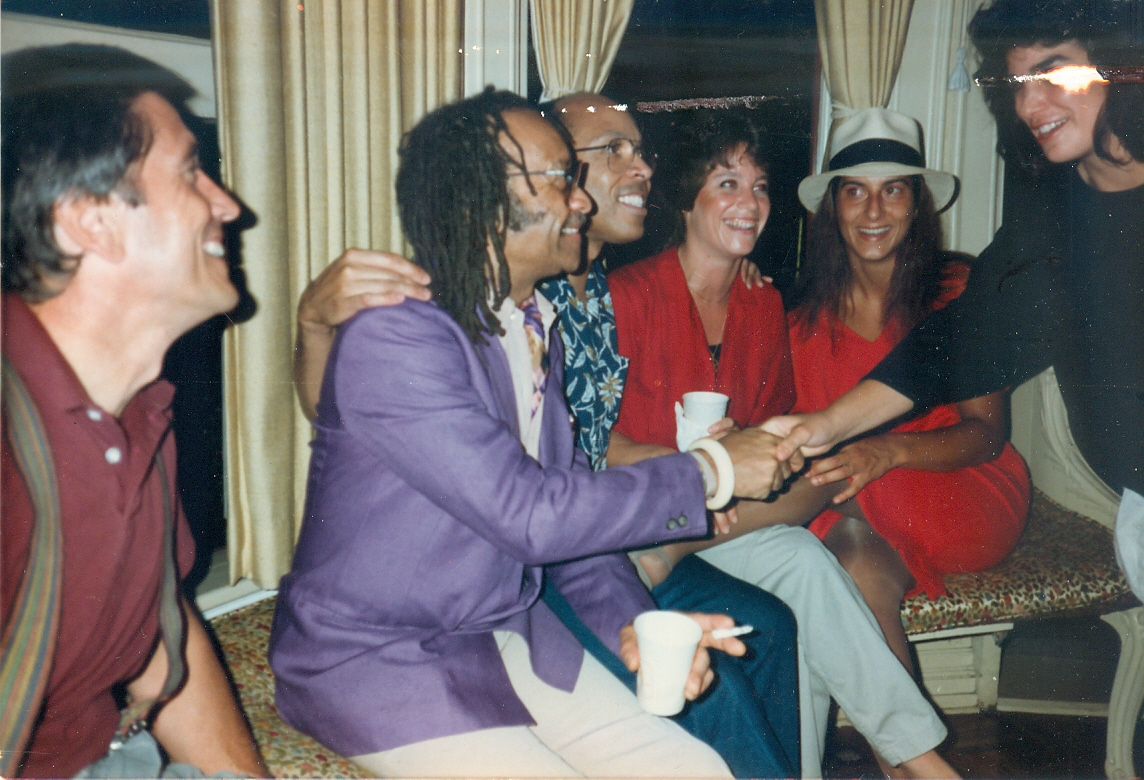 Cecil Taylor (center) at a Milwaukee reception in his honor, greeting an admirer, Karen, the spouse of VIolent Femmes drummer Victor DeLorenzo. Also in the photo, at left, is Jim Glynn and, to Cecil’s left, our mutual friend Ken Miller.

The next day, he attended a reception in his honor at the Wisconsin Conservatory of Music, which Cecil soaked up gratefully. Photographs that Ken Miller took of Cecil in his room at Milwaukee’s Pfister Hotel graced the cover of Down Beat containing my article, as well as the cover of Taylor’s ensuing solo album For Olim. 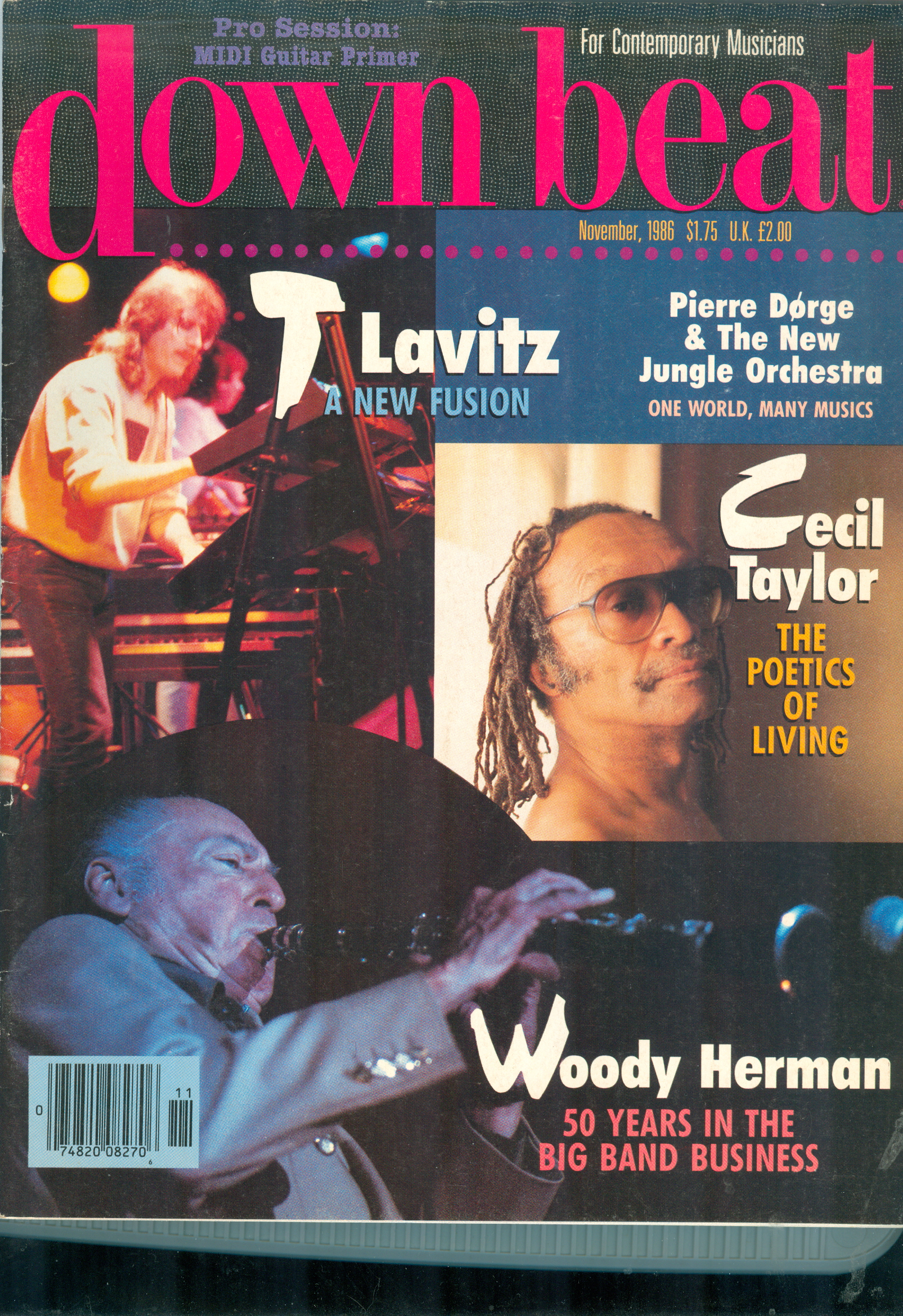 My favorite portrait of Cecil Taylor was this one, taken by our mutual friend Ken Miller, for my Down Beat interview feature on Taylor. Courtesy downbeat.com

He died in his long-time Fort Greene brownstone. I imagine Cecil trying to practice that day, perhaps even expiring at the keyboard. Born at the crux of The Great Depression a few months earlier than my late father Norm Lynch, Cecil possessed a comparable personal warmth. That came from his generous physical heart, guts and brain. One of Taylor’s finest comments on the notion of “free jazz” is from the liner of Fly! Fly! Fly! Fly! Fly!: “There is no music without order — if that music comes from a man’s innards. But that order is not necessarily related to any single criterion of what order should be as imposed from the outside. This is not a question, then, of ‘freedom’ as opposed to ‘non-freedom’ but rather is it a question of recognizing ideas and expressions of order.”

My final word is left to Cecil Taylor the poet, from “Garden,” his long, bountiful poem from the Moment’s Notice collection: