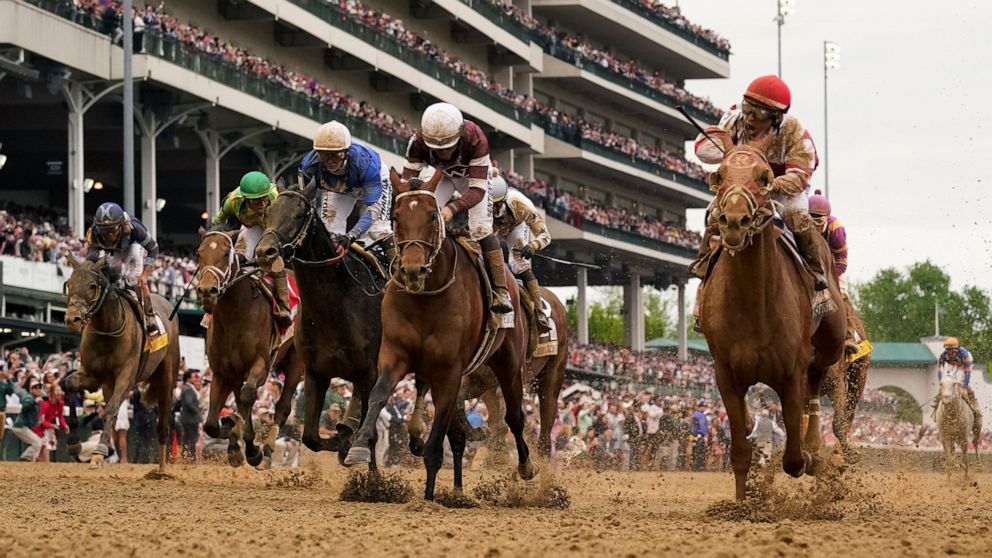 An astonishing upset: Jockey Sonny Leone (right) exhorts Rich Strike — the field’s longest-shot — past the leaders in the final few strides of the Kentucky Derby.

You watch the bird’s-eye replay of the race, with Rich Strike electronically highlighted to follow, and immediately you feel yourself rooting for this improbable horse, when you see where he is approaching the final turn — still behind sixteen horses!

After watching and re-watching the most electrifying two minutes in sports I’ve seen in a long time, I realized I needed to write something about Rich Strike’s astounding upset victory in the Kentucky Derby. This is culture of the most suddenly impactful sort, marking a legend like a streaking arrow, enriching history. It’s hard not to love the underdogs who’ve toppled the mighty, and the benefits that might signify, when the vast majority of the globe’s inhabitants live far beneath the mighty.

This event was also amazing to me because I had no rooting or betting interest in this. I do enjoy horse racing, but so casually that I usually even forget that the Kentucky Derby is happening, as I did this time.

So, there’s no built-in subjective reason this should be so thrilling for me.

This race has several key components: the horse, of course; the jockey, the horse’s long-shot betting odds, and the nature of this race itself.

First the horse, and all his improbability. He has never won a race before and didn’t even really qualify for this field. He was added only because another horse was scratched shortly before the beginning.

So, to the race: Rich Strike spends the first mile absolutely straggling, or so it seems, with only a few horses behind him.

But the leaders set an extraordinarily fast pace, which will help determine what happens in that final turn. It’s always a great pleasure to watch the collective rhythm of racing horses — surging, sprinting, and jockeying for position, tails a-wagging.

The thundering hooves continue until the horses are nearing the final turn and the home stretch.

Here the tell-tale overhead camera pinpoints Rich Strike. It’s amazing to see the ground he makes up from here:

Even as Rich Strike finally clears a bunch of horses and finds the inside railing clear and open, the betting favorite, Epicenter, has just surged powerfully into the lead. And the final turn is in process, so Epicenter can see the tall, white finishing pole by now and looks dead-on determined to not lose the lead.

Meanwhile, Rich Strike has grabbed your attention as jockey Sonny Leone — riding his very first Derby — maneuvers the three-year-old out of a jostling mess of horses. Increasingly I realize what a brilliantly savvy horseman he was. Yet, you still don’t think the longest shot has a chance, nor any other horse, at that point. The announcer Larry Collmus, is now bullishly calling the drama, growling out “Epicenter takes the lead!” with stentorian power. He’s a great race caller, with a perfectly attuned sense of drama dynamics.

And yet, here is where the greatest underdog begins to accelerate and, as you watch him zoom past horses, you begin to lose your breath. He has to finally move back inside around the number-three horse to make his final hurdle-to-glory run.

And sure as hell, there he is, gaining on the two lead horses. Here’s where the fast pace comes into play because, despite the impressive lead of the two battling horses, they may be losing gas. And Rich Strike apparently has saved enough in that first half mile that he could now show the world how powerful and brilliant a sprinter he is — at the very end. And what kind of character he has. You certainly could sense that this horse wanted it more than any other, because there was a hard-to-measure willfulness in that dazzling final dash to victory. At the finish line, Rich Strike has come “out of nowhere” to win The Kentucky Derby by one length. NBC

“Absolutely, positively the greatest final turn run I’ve ever seen.  And I’ve been watching the triple crown races for 50 years. Rich Strike was on after burners. Super charged to the max. Amazing rider, even more – amazing horse. Faster than the wind.”

Mr. Gunior combines a modern, relatively high-tech analogy “on after burners,” which references how supersonic jets employ a surge even after their main fuel line is expended. And then, of course, “faster than the wind” is an aptly elemental simile that lifts the horse into an almost mythical stratosphere, as the wind can move as fast as a hurricane, or a typhoon.

And because horse racing is one of the most ancient and time-honored sporting events, you feel it’s elemental drama and majesty.

But something has to provide a measure of explanation for this extraordinary performance.

That is a topic for anyone to chew on who sees this race. I’m a bit gassed myself, in the best sense, thanks to a thrilling and inspiring champion.

Finally, only a few strides from the finish line, the announcer is loudly hailing the two shoulder-to-shoulder leaders, Epicenter and Zandon — he suddenly gasps and must yell out another name for the first time: “Rich Strike is coming up on the inside! Oh, my goodness! The longest-shot has won The Kentucky Derby!”

He has won by a whole length. Suddenly. Unbelievably. A legend is born.