If we’re not haunted by the last dreaded year, it surely still follows us around, at the very least with masks, whether pocketed or making us  strangers to friends. Worst of all is a plague of recollected fright, sickness and loss.

So slowly, we begin to begin, again, the new “old” life.

One of Milwaukee’s lesser-known art galleries reflects back on the pandemic with vivid and resonant forms and imagery. The Jazz Gallery Center for the Arts, 926 E. Center St., is best known as a live music venue, which obscures its distinguished history of well-curated and extremely diverse art exhibits, overseen by the venue’s manager Mark Lawson, who also curates galleries at The Milwaukee Institute of Art and Design. 1

ReBegin: New Works for New Beginnings, a group show of 18 artists running through May 29,  suggests creative-rebirth from pandemic, but also how we may never see the places we’ve been to, in the same way. 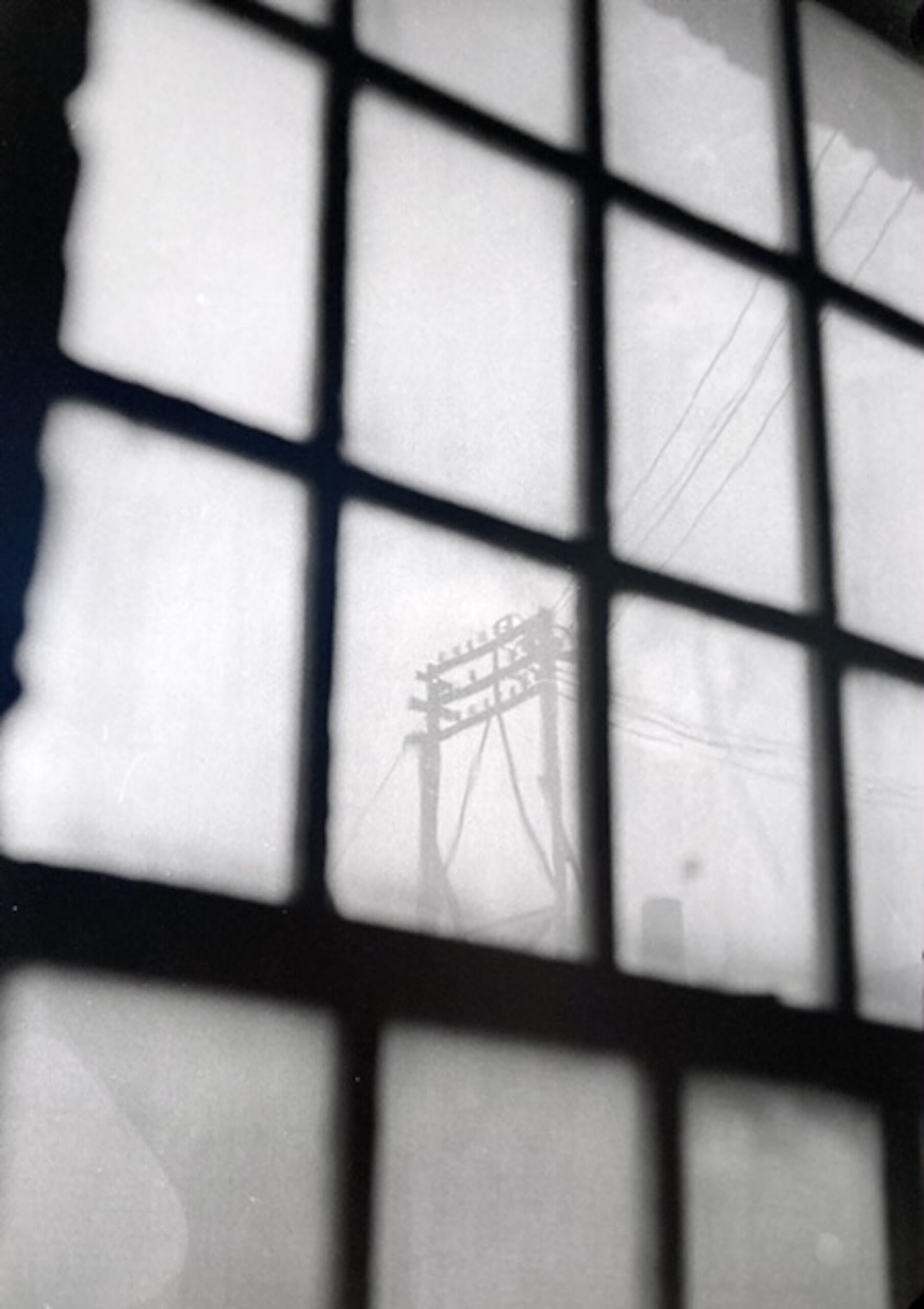 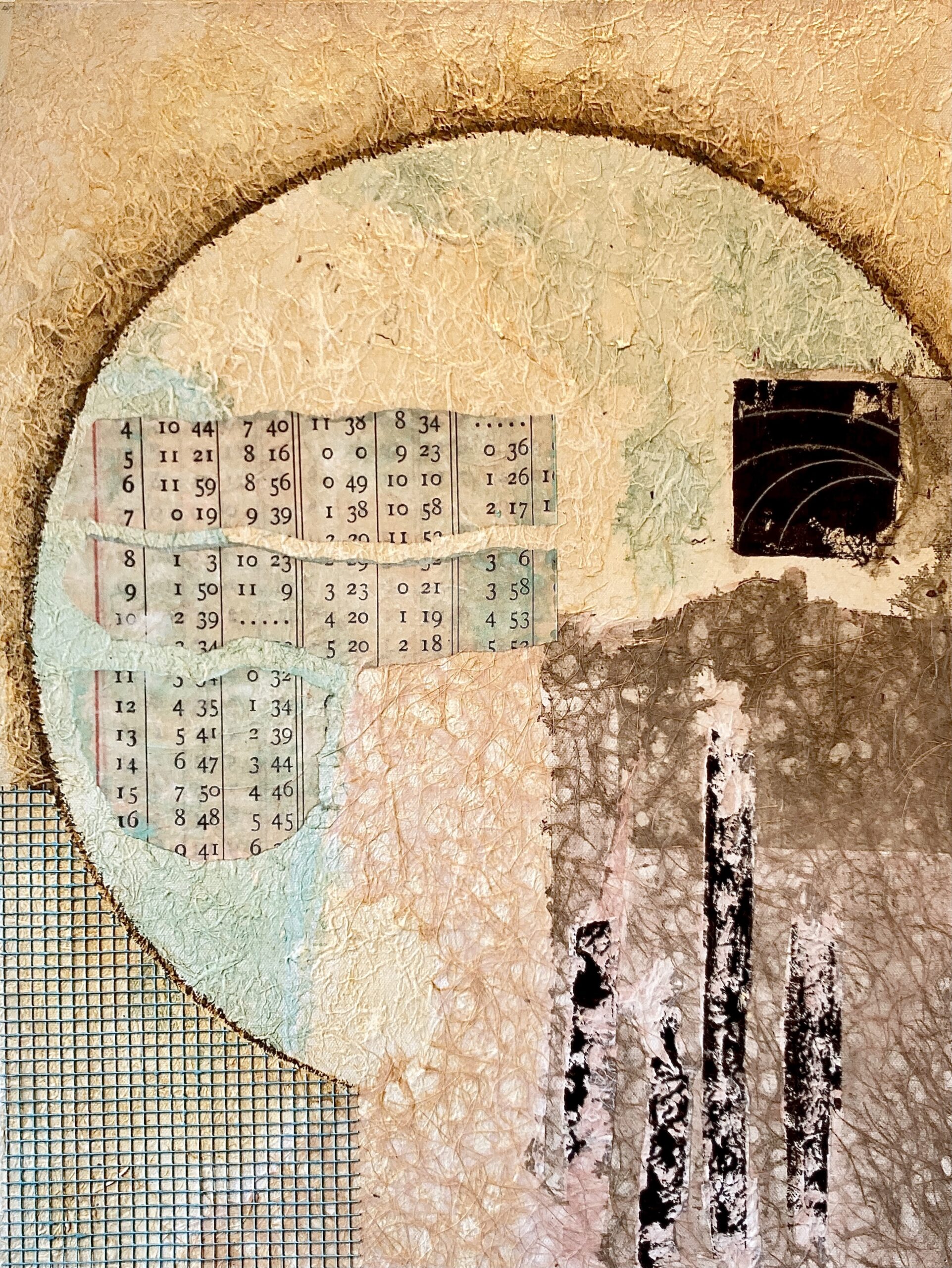 Similarly, Karen Williams-Brusubradis’ large acrylic painting “Metamorphosis,” reveals the microscopic workings of an apparent human nervous system in transformation from forces playing, or preying, upon it. 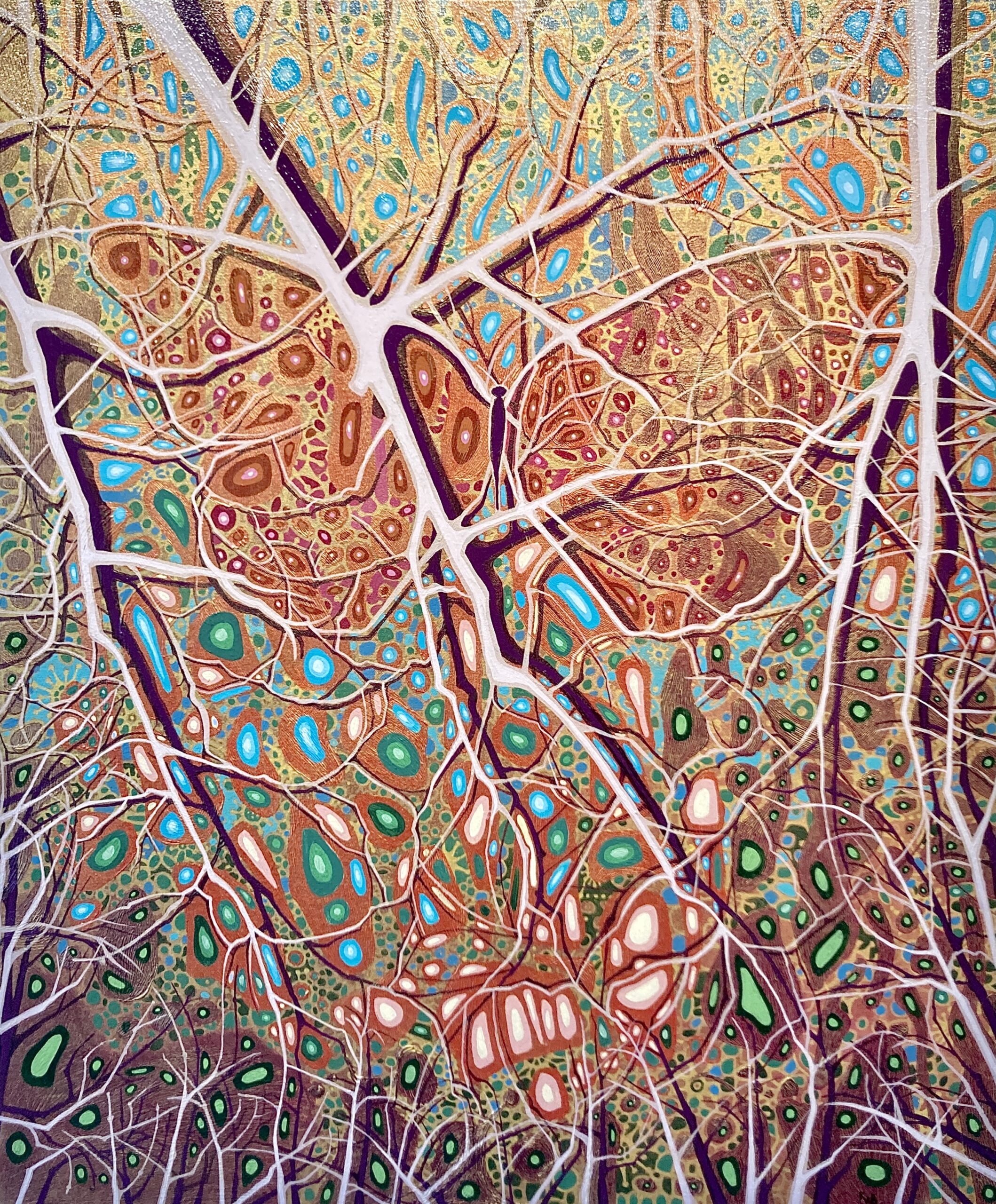 Among the most optimistic or affirmative pieces is Bennie Higgins’ lyrical “Frog Hunter III,” depicting an at-risk boy playing at a riverside, somewhat autobiographical in that Higgins, a former police officer and untrained artist, now counsels “men to be better men” at a women’s shelter, Lawson explains. 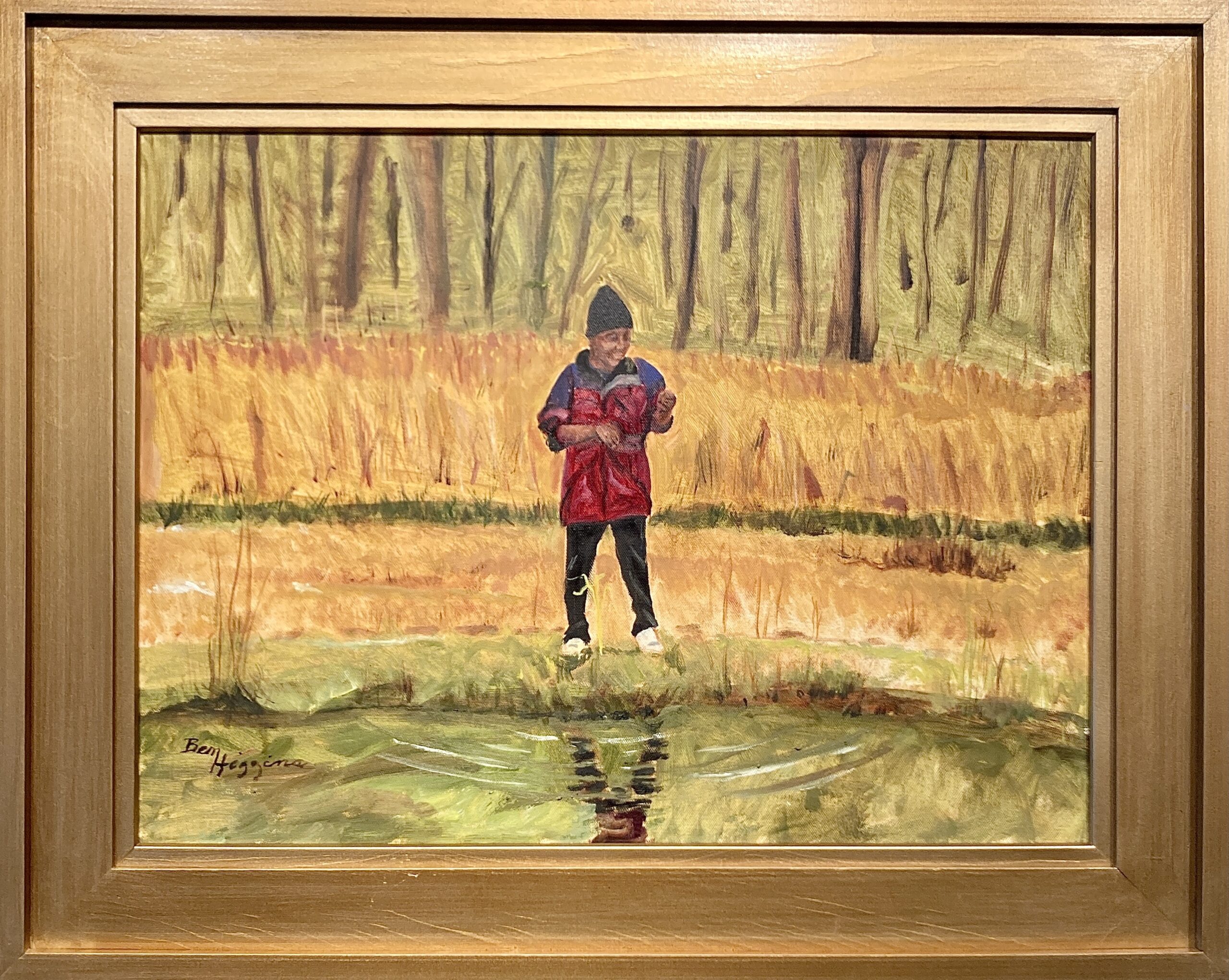 Amy Schmutte’s virtuosic and innovative color photography seems to depict spring’s inevitable emergence from an atmosphere-immersed haze. In her Lewis Carroll-esque titled “Sproutoutlyng,” a lusciously sinuous flower fights through a sublime shadow of infected memory. Schmutte, who co-curated the show, prints her photos on brushed metal plates “because the way that light plays with that surface adds another layer of beauty” in photography, which she thinks of as “writing with light.” 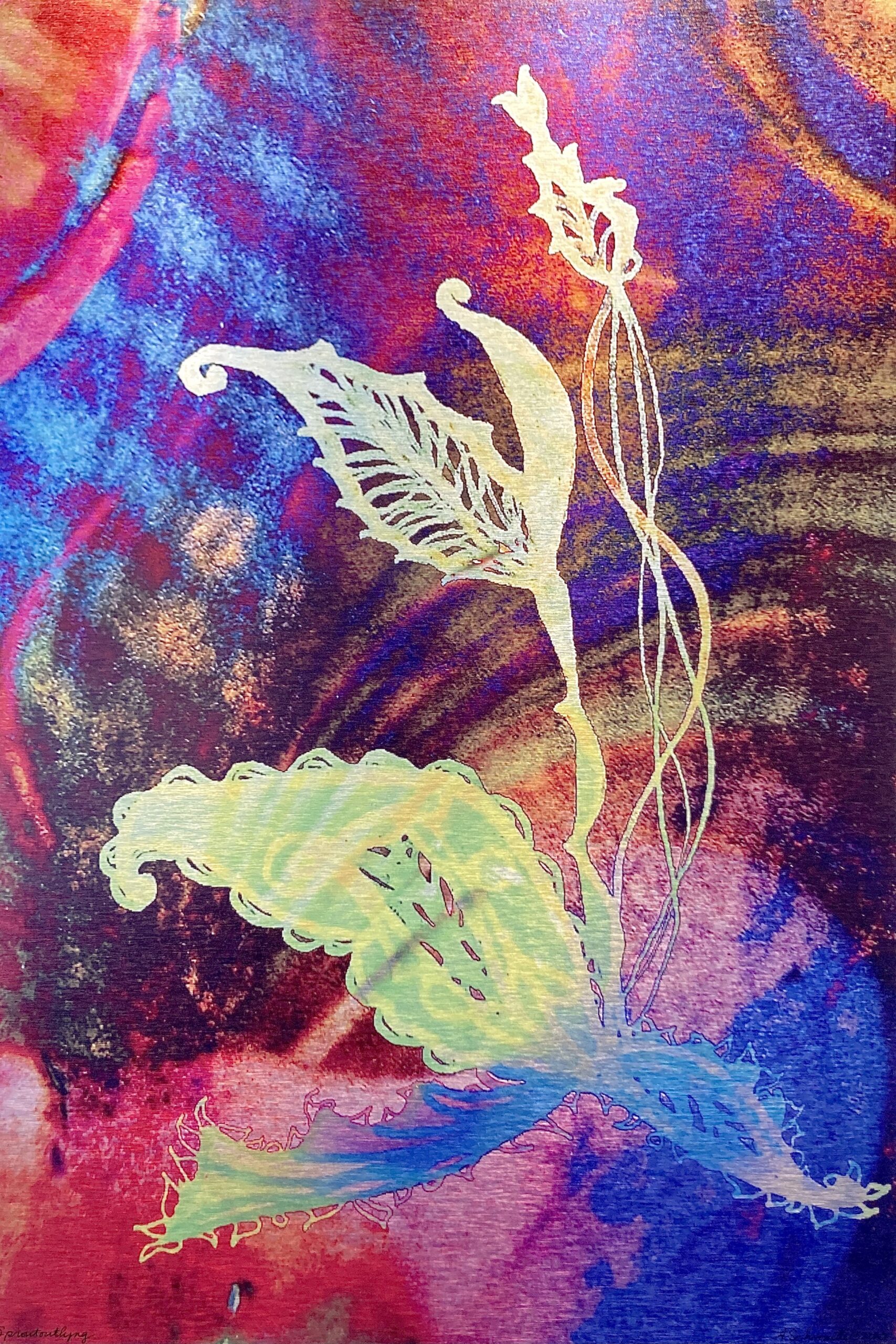 Yet for me, the most eloquent and powerful piece in the show is its only sculpture, “Chrysallis,” by Jessica Schubkegel. This is a life-sized figure of a small woman, prone, and apparently afflicted. The piece comprises a model constructed of wire mesh, covered by a skin montage of torn fragments from a medical text. Buoyed in grace with elegant gestures, the form follows one leg raised at the knee, sinuous hip contraposto, and an arm bent to reach gently for the throat. It balances a sense of repose and illness that dwells deep in uncertainty. For all that hard-earned beauty, the closer you look, the more you discover implications of insight in the medical bits of meaning, an immersive, acute sense of possible doom. Still, the title perseveres. This mummy-like presence mirrors nature’s rebirth, and a sense of emergence and deliverance.

A side gallery includes anime-style cartoons by McKinley Blackwell.

1 The JGCA art exhibits are often curated by committee, including the organization’s board members or other artists Lawson invites to curate. Despite no live music this last year, the venue has survived the pandemic significantly thanks to a notable increase in sales of artwork, both in the gallery and especially online, Lawson says. Here’s the link to the JGCA’s visual art online: https://jazzgallerycenterforarts.org/art

This review was first published in slightly altered form in Shepherd Express, here.