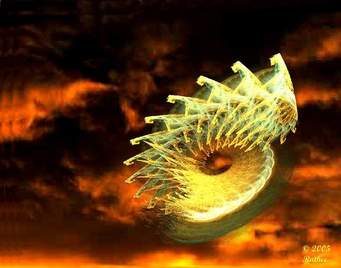 Artist rendering of the eye of a tornado. Courtesy ArtWanted.com

There seems no elegant way to begin this little fractured fairy tale, so I’ll get on with it. I was seated on the false throne upon which I debase myself before Mother Nature every morning. Ah, but the Grande Dame had a new experience – and task – in mind for me today, telling this story apparently.

Because, dear reader, fractured as this fable may seem, it is true. I had heard that this sort of phenomenon happens, but only as an old wives’ tale (or an old soldier’s amazing tale of valor, to be more P.C.?)

Chloe is my very intelligent but slightly crazy cat. But what the hell was she doing in the tub? The shower curtain was pulled away, behind the free-standing tub, so it wasn’t occupying her, as it sometimes does. Then, her well-rounded, open-air fits and starts all of a sudden fell into place in my still-groggy morning mind. 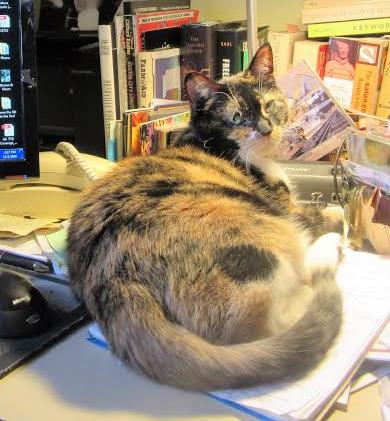 You probably know how much cats like to get into circles. Now you know how tantalizing Chloe’s white tail is — to that end — sometimes, especially to her.

I think she’s chasing her tail!

She had hopped into the curved end of bathtub which may have sent her mind into a circular tizzy. So I leaned over to get a better view of the action, and sure as heck.

She was not only chasing her tail, she was stalking it, as cats are wont to do. Chloe happens to have a white tip on her darkly mottled Calico tail, which seemingly was now contributing to her self-involved intoxication, this small “I” of a tornado.

So part of her body waved the tail tip tauntingly at her face from below until she could stand the tension no longer in her contorted, curled-up crouch – She had to attack!

But, spinning madly, she failed miserably, of course. Still, she was now hell-bent on capturing the monstrous tail, dead or alive!! Like a manic ghostbuster chasing down the thump of an accursed, beating, disembodied heart!!!

I imagined Edgar Allan Poe nodding in demonic glee from his grave somewhere in New England.

Meanwhile, I also envisioned something else, A Red Badge of Courage, forming mystically upon Chloe’s furry breast.

Again, the tail swayed slowly back and forth, mockingly. Again, she pounced in ferocious, temporary (I hoped) insanity. And again.

I swear, this went on for several minutes and I figure that she traveled several cat lifetimes in pursuit of the white, phantasmagorical mouse she had trapped.

What goes through the mind of a cat in such times, aside from the wind blowing in one ear and out the other, registering a small echo in the empty cavern of her brain that sends her on such wild goose chases?

No wonder, it was a wild goose, or at least a goose poking its head up out of a hole in the ground. Wow, that sounds pretty tantalizing, to even me.

The reporter in me finally kicked in, and I thought, I can maybe capture some of this on video, for proof, if I can only reach my camera.

Done with my duty, I tiptoed into the kitchen, loaded the recharging battery into the camera, and made my way back. Of course, the tiny click and whir of the camera mechanism going on caught her attention, and her interest in the wild goose, or mouse – that, in fact, chases her all day long – suddenly abated, and she hopped out of the top with her little “Geronimo!” meow and was gone.

So now, rather than visual proof, you have merely my words and your own imagination to contemplate this modest wonder of nature. Or the truth of its telling, a tall order in these topsy-turvy political times.

Was this somehow a metaphor for dear, confused America, today? Or was the tail a mere fairy? I guess it’s time for me to get to work, while you contemplate.

If you happen upon any cosmic insights, please leave them here.