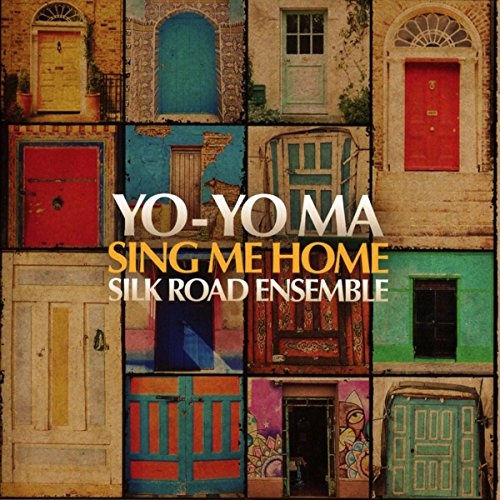 Among the bejeweled highlights: “Ichicila,” with Diabate’s spangled kora and Balla Koutate’s warmer balafon; the vocals and sitar of Shujaat Khan improvising on the strangely blissful raga melody of “Madhoushi.” Giddens and Romani gypsy musicians re-casting the abject yet artful blues of “St. James Infirmary.” For all the globe-trotting, it’s all ultimately about the difference and commonality of home, as Washburn proves stunningly on Bohemian Antonin Dvorak’s beloved adaptation of the black spiritual “Goin’ Home,” intermingled with Chinese lyrics by Washburn’s vocal partner here, Keith Lipson, with Wu Tong.

Perhaps the most deeply celebratory piece is Kinan Azmeh’s “Wedding.” See SRE at the Global Musicians Workshop perform the tune live at The Tanglewood Festival. Take the ride on this video sequence of impassioned solos by trombone, shakuhachi flute, bagpipes, clarinet and sheng (wind) player Wu Tong’s vocals — unearthly yet yearning for the home a wedding strives to create. The playing is as hot and fiery as any jazz or improv piece I’ve heard in a long while. And the ensemble’s chemistry and dynamics fuel it.

The recorded version of ‘Wedding” is shorter and not as far-reaching. But the in-concert expansion of “Wedding” brings me to a key point about this group. When I saw them perform a while back, I discovered what I trust most do who see this group live – how vividly they embody the shared potential of the global human experience, which is intensifying with startling urgency, more and more every day throughout the world.

That’s also evident in Yo-Yo Ma’s curatorial role – his genius here is in his musical vision and remarkable humility given he’s among the world’s greatest cellists. On Call Me Home, one of the few times he allows his exquisite playing some space, is on “Cabalino,” a work song from Spain’s Galia region. With Taiko on drums, it’s a probing incantation that expresses the laborer’s dependency on a strong but vulnerable work horse.  Along with Davide Salvado’s mournful vocals, Ma’s cello beautifully conveys the symbiotic passion of the man and his creature.

“The Shingashi Song” is a fisherman chanty that describes the harsh life on the northern tip of Japan — “historically, a new frontier attracting pioneers in pursuit of their dreams,” writes Haruka Fujii, who arranged it.
He continues: “just as a rivers bend, in turn, ‘The Shingashi Song’ took on many forms before arriving at this arrangement for the ensemble.” They help the music “sail in the open ocean. Though the songs referenced are considered important cultural assets of Japan, many folk arts are struggling to survive as villages across the country face depopulation.”

Accordingly the music of cello and taiko drum contrasts the playfulness of a child’s game at home to the out-on-the-edge struggle of such fishermen.

You hear and envision how culture remains the lifeblood of indigenous peoples in their homes and work, even in the most inhospitable of places and circumstances. Our shared cultures can be powerful bridges as we all face as thousands of refugees continuing to flee what was once their homes in this tragic era of political strife and environmental catastrophe.

This album is as moving and comforting as it is soul-searching and transporting.