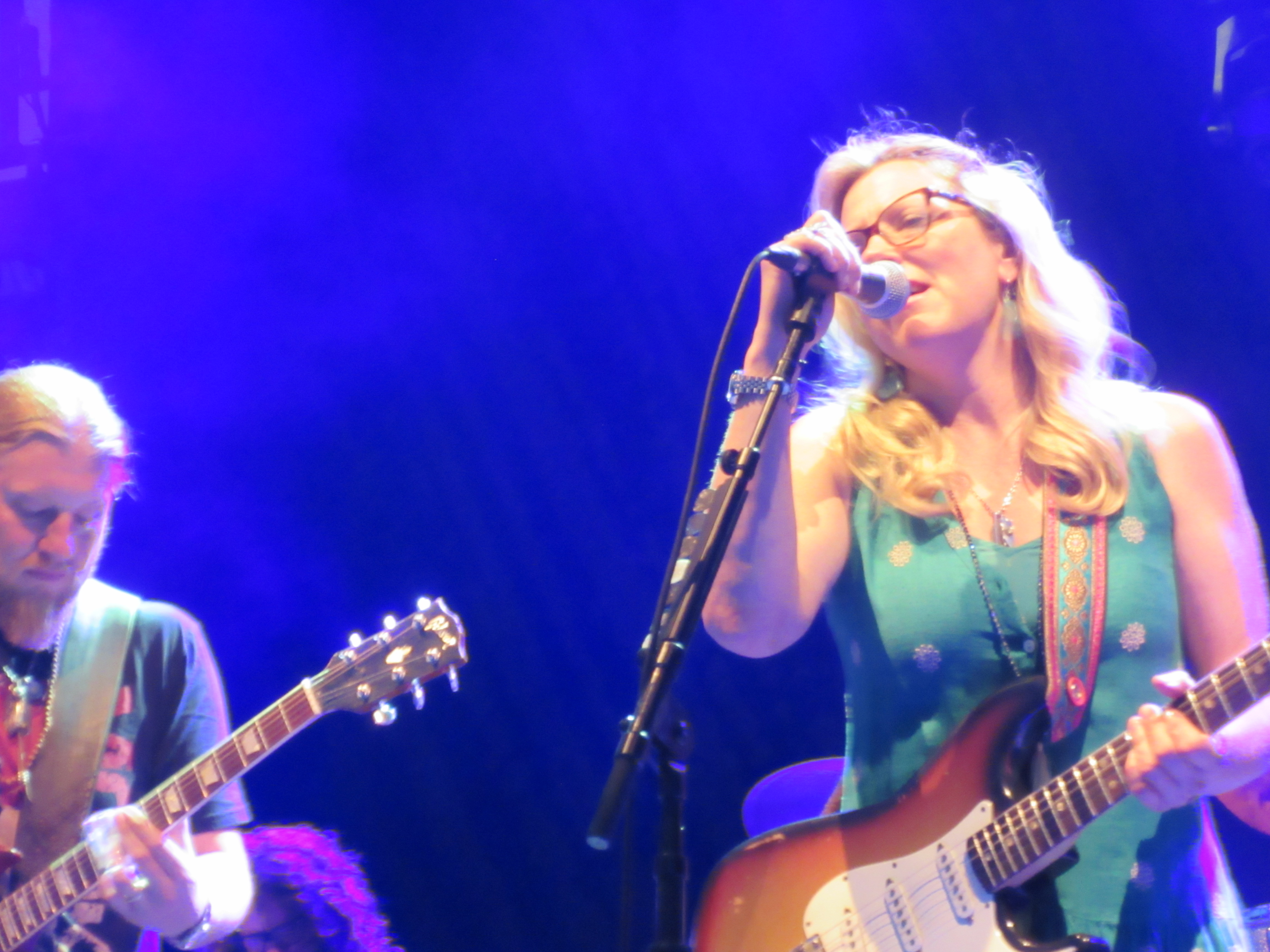 Derek Trucks and Susan Tedeschi, here performing in White River State Park in Indianapolis, may be pop music’s most talented and hardest-working couple.

Indianapolis — A wall of dark, broad-shouldered clouds hovered above the massive J. W. Marriott Hotel, surely one of the largest facades this side of the United Nations building, with mirror windows that reflect myriad aspects of the sky’s caprice. The building looms over the Farm Bureau Insurance Lawn, nestled along the refurbished White River Canal, which includes ancient canal lock foundations sitting in the middle of the water like giant grizzled, brick turtles. Those clouds felt ominous for the big outdoor concert headlined by The Tedeschi Trucks Band, which my girlfriend and I were walking towards. 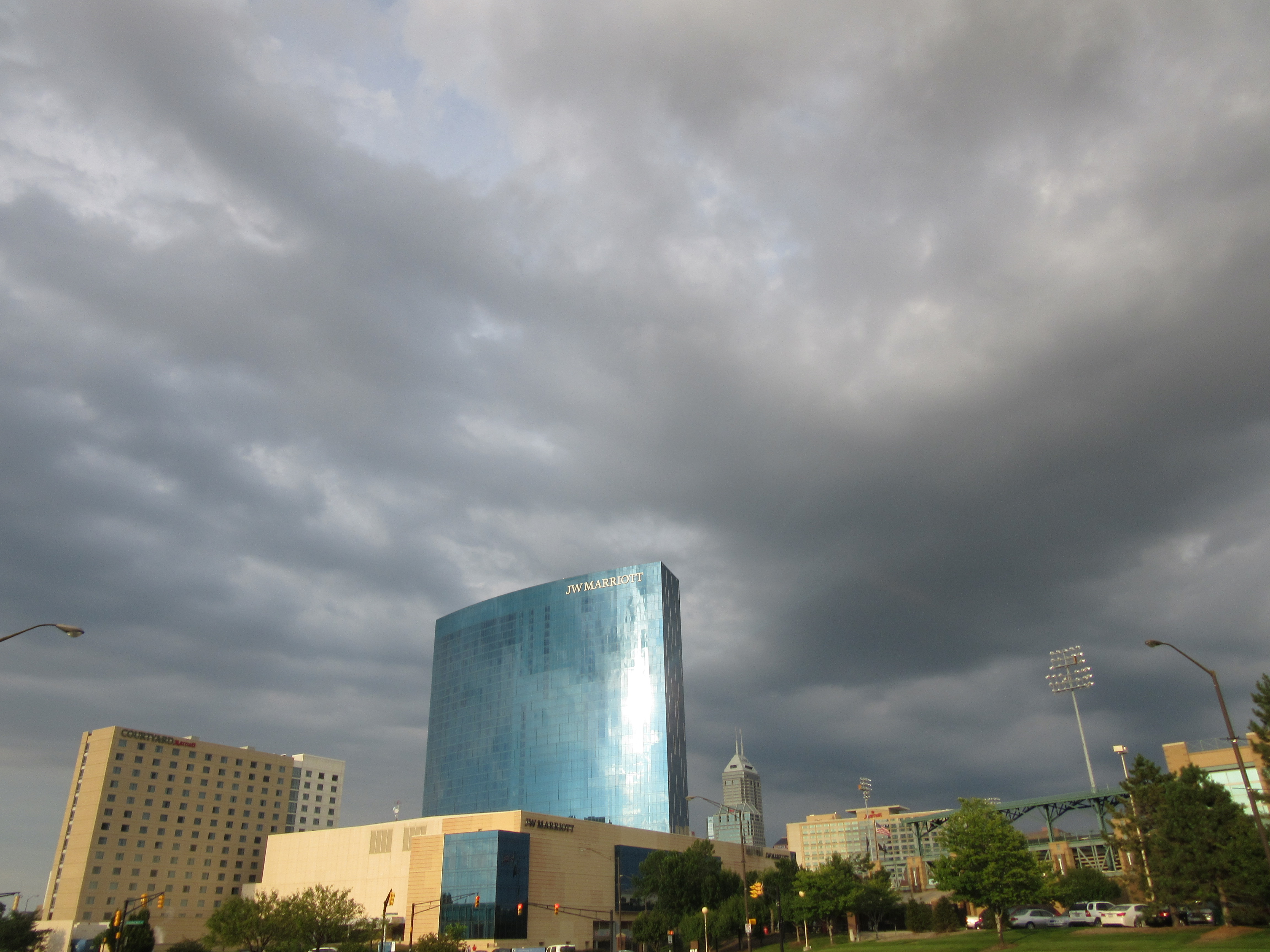 Just east of the park at Lucas Oil Stadium, The Indianapolis Colts prepared for a new season. But the sky eventually mimicked the clouds, merely growing darker as the sun set.

We arrived too late to see the opening set of the North Mississippi All-Stars, but the band’s star guitarist, Luther Dickinson, came on to jam on a couple of songs when Los Lobos hit the stage. This sort of band commingling is part of the “Wheels of Soul 2016” tour concept, in which members of the three bands sit in with each other. Soon, Susan Tedeschi walked on unannounced in a pastel green print summer dress and sang an impassioned version of Marvin Gaye’s “What’s Goin’ On?” with “the wolves” providing sparkling vocal support in high harmony. Gaye’s imploring lyrics resonated with our times, with such lines as “Picket lines and picket signs/ Don’t punish me with brutality./ Talk to me, so you can see.” Tedeschi especially drove home hard the line “For only love can conquer hate.” 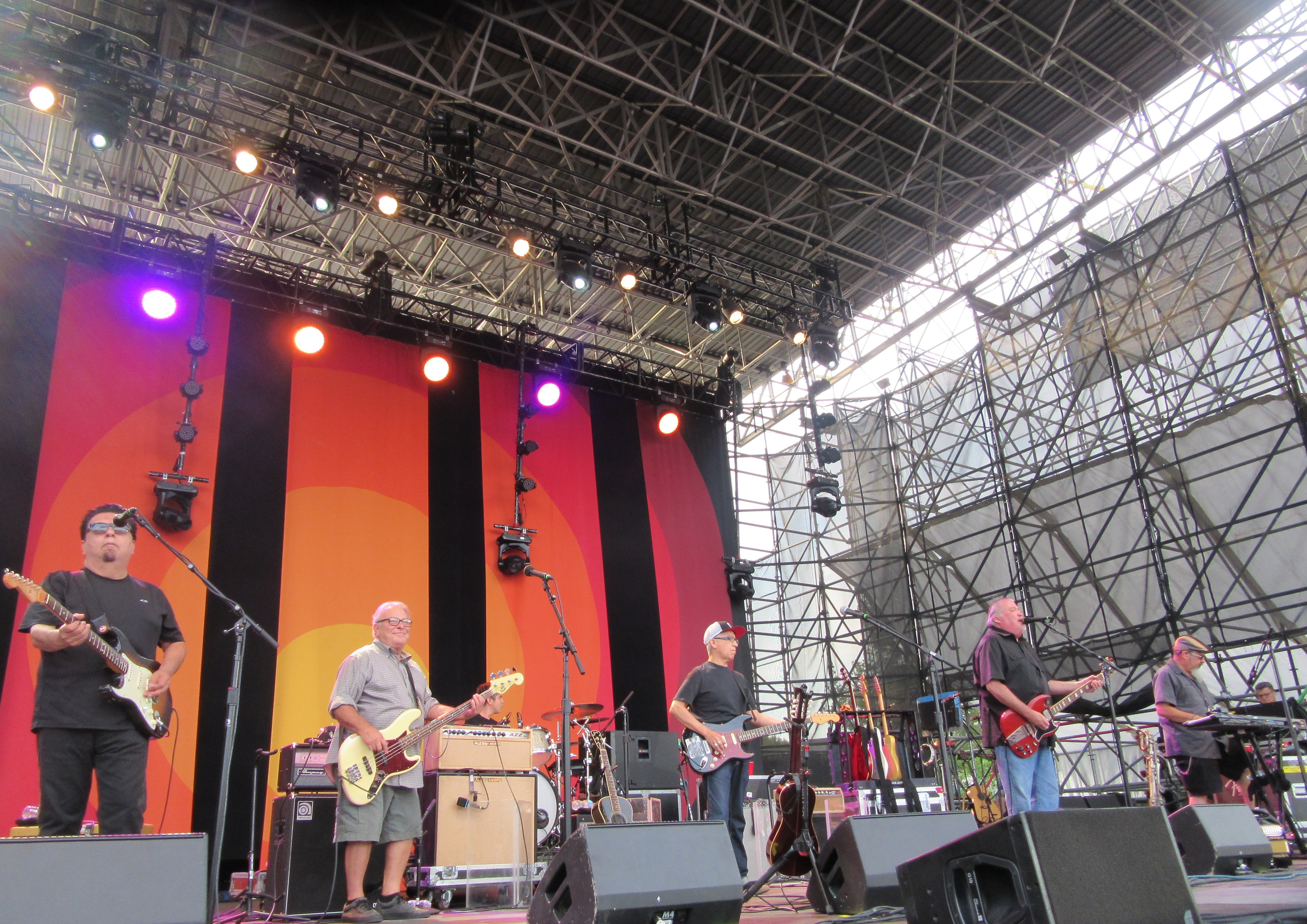 Next thing you knew, guitarist Derek Trucks and his band’s three horn players stepped out and the impromptu ensemble cranked up a monster guitar ensemble riff (with four guitars now onstage), jousting with the horns, with heavy musical armor clanking.

Los Lobos, the remarkable Latino group from East Los Angeles, remains a force with the same personnel over 40 years, and a joy to behold. Their last album, Gates of Gold shows absolutely no loss of creative and performing powers. Yet, although the band soon fell into a deliciously rocking groove, they offered very little material from that album, aside from “That Train Don’t Leave Here Anymore.” But singer-guitarist Cesar Rosas remains a growling and prowling rock ‘n’ roll voice, and the train rumbled down its track with abandon.

The band members offer a study in onstage contrasts: Rosas is the voluble hipster in goatee and shades. Bassist Conrad Lozado bounces along merrily in shorts and a perpetual grin. Bespectacled and largely mum Louie Perez, the band’s resident poet/songwriter, resembles a college professor who just discovered the joys of the electric guitar, but his serious, pursed lips won’t let on. Behind him, the band’s only comparative youngster, drummer Enrique “Bugs” Gonzales, stokes the beat with zealous relish.

And beside short, slight Perez stands his hulking counterpart and old high school compadre, singer-guitarist-multi-instrumentalist David Hidalgo, who always seems slightly afflicted by soulful pain. To his left, keyboardist-saxophonist Steve Berlin lurks in shades and long, gray goatee, like a mysterious monk summoning the music of the spheres.

Their set was too short but rich, especially with the personnel mixing.

After a break on this sultry night, The Tedeschi Trucks Band ensued. Their latest album, Let Me Get By, bears a liberated Mongolian eagle as its iconic cover symbol, and the great raptor hovered majestically in a large background projection (below). 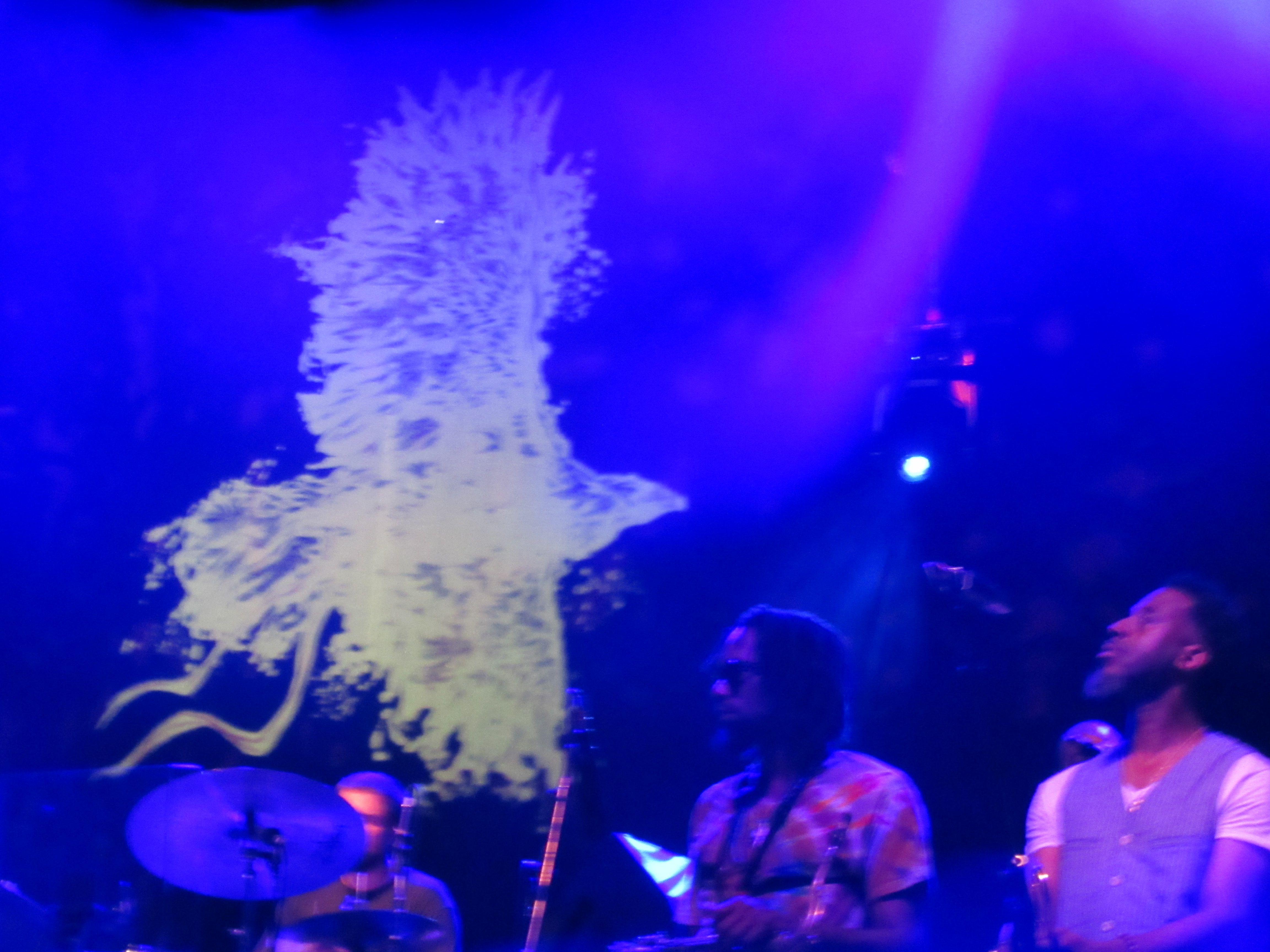 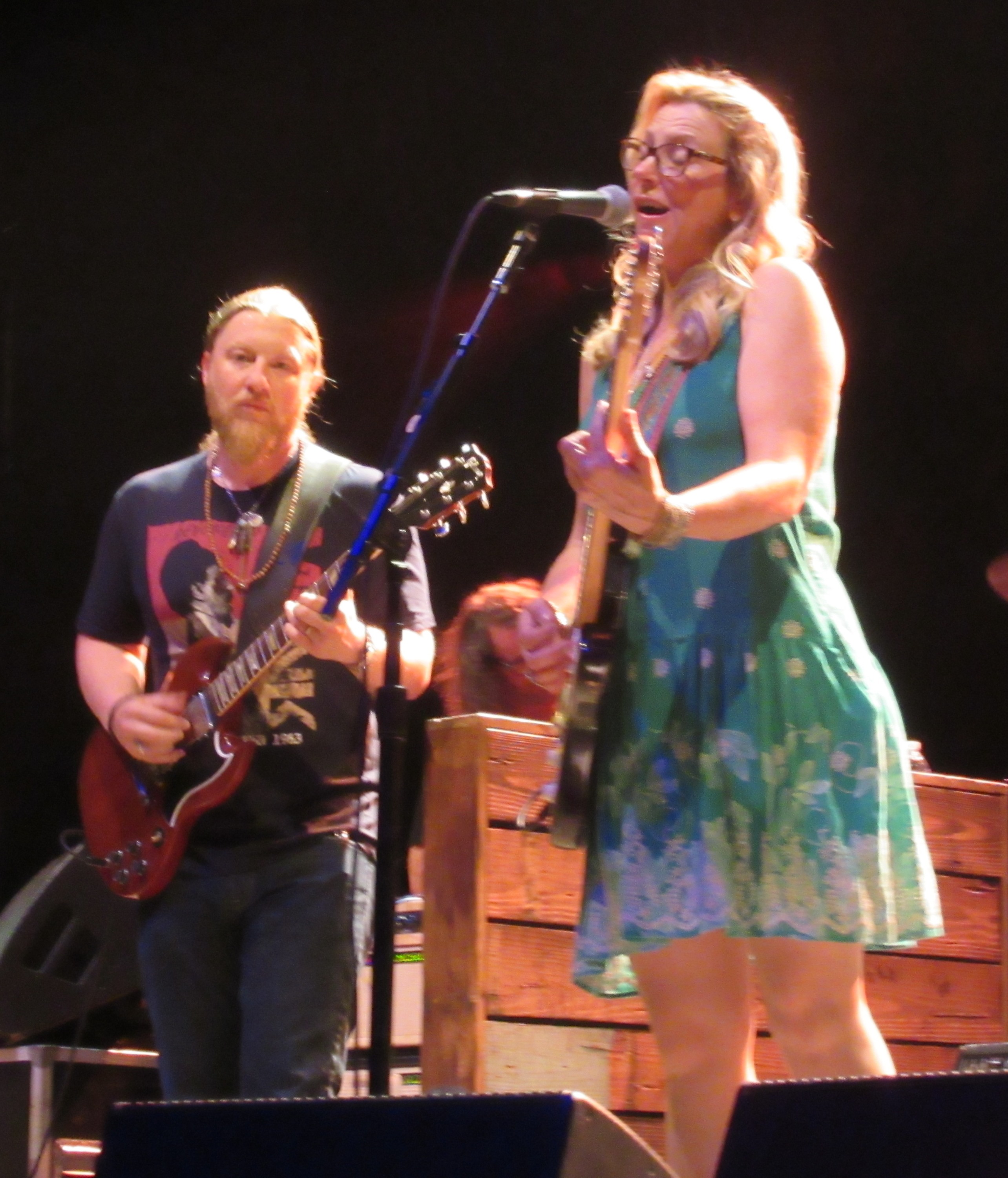 There are many aspects to singer Susan Tedeschi’s vibrantly expressive vocal style, including a tendency to sing out of the side of her mouth, as above.

And the group consistently liberates itself in pushing the boundaries of an array of genres – the blues, R&B, rock, gospel, jazz, and even country – by strapping them together in various stripes in their distinctive originals. So we heard such TTB standouts as “Bound for Glory,”  “The Storm,” “Let Me Get By,” the Sly Stone-esque “Don’t Know What It Means,” “Right On Time,” the pulsing rainbow of a song redolent of an old Beatles brass-band rave-up, and the raga-soul “Midnight in Harlem,” where tenor saxophonist Kebbi Williams took a superb solo in place of Trucks’ usual guitar spotlight. The sax conveyed a sudden revelation amid the song’s bittersweet story of loss and urban desperation, and felt like a tender smile and a sigh bleeding together.

Trucks seemed to share the spotlight more than usual this night, and yet he delivered an understated but stunning “raga” passage, which introduces “Midnight.”

This seemingly improvised raga works with the song’s tonalities more than its chords or melody, per se (until he states the melody at the end of the improv). It’s his time to explore the guitar especially with Eastern classical microtonalities, tunings and fingerings, as well as the spirit of East-meets-West. For this band, I think, Harlem might signify the essence of The West. The East, accordingly serves to illuminate things about the West.

So in this intro solo, Trucks uncovered some bizarrely enchanting sitar-related voicings that I don’t think I’ve heard on a guitar before. People like Mike Bloomfield and George Harrison opened the door for this, via the great sitar master Ravi Shankar, of course (with jazz guitarists like Gabor Szabo pioneering a jazz-middle eastern connection about the same time, the mid-60s). But Trucks is very quietly (considering his fame) expanding the vocabulary and expressive palette of the contemporary electric guitar through this realm, and his astonishingly developed slide-guitar technique facilitates that search, with its emphasis on striking and strange harmonics more than precise, Western-style chords. This all seems important to him. The sum of his effort works beautifully as an intro to the depths as “Midnight” plumbs — as if he’s setting a cinematic mood and scenario and a consciousness-expanding spirit for this vivid and powerful song. 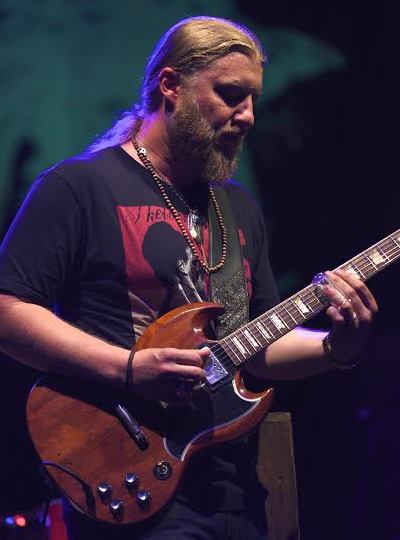 Derek Trucks plays at the Wheels of Soul 2016 tour in Indianapolis on July 27. His highly developed bottleneck slide technique facilitates his exploration of Eastern tonalities in his “raga” modes. Photo by Chris Shaw of Indianapolis.

It’s a prime example of how these road-tested stagecoach riders know where they’re going with their reins on all those vernacular styles because they know where they came from. Tedeschi swerved into honky tonk on “The Color of the Blues,” where the blues married a barroom cowgirl in this chestnut by George Jones, the magnificent country vocal stylist who died in 2013. Accompanied only by her own guitar and background vocals from Mike Mattison and trombonist Elizabeth Lea, the lead singer mined the dolorous lyricism implicit in the blues.

She also tore into the old Bobby Blue Bland hit “I Pity the Fool” and ratcheted it up higher than when I saw her perform it in Madison on the band’s previous tour. Towards the end of the song, she unleashed a sassy rap like a righteous black woman putting her wayward man in his place. I mean, for a white woman from Boston with a little-girl talking voice, Ms. Tedeschi was dealin’!

Also convincingly covered were ZZ Top’s “Going Down to Mexico.” The Box Tops’ “The Letter,” and Sly and the Family Stone’s boisterous “Are You Ready?” which improbably tested the audience’s readiness for their almost comically drastic gear shift into an extraordinary rendition of James Taylor’s “Fire and Rain.” Here, a relatively new band weapon emerged when background singer Mark Rivers took the vocal lead. The song’s bittersweet reflection swelled into nearly operatic heights but never felt overblown, partly due to its doo-wop colorations.

If any band can redefine and re-invigorate American music by embracing the best its many vernaculars have to offer, it is Tedeschi Trucks. At times their idioms feel like a journey into valleys as shadowy as the mythical American  “Mystery Train,” but they invariably chug up to the crest where it all makes sense in the sunlight, like a train bound for nowhere else but glory.

All photos by Kevin Lynch, except as indicated.