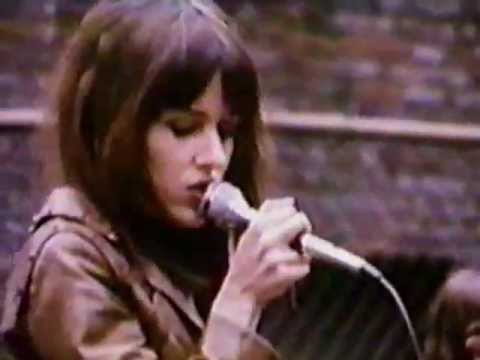 Here’s a postscript on the significance of the 1967 Jefferson Airplane album After Bathing at Baxter’s, which was highlighted by Howard Mandel in a tribute to airplane visionary Paul Kantner who died on Jan. 28. See my previous blog for his tribute. Facebook friend Alan Ringel supplied us with a link to Jean Luc Godard’s short film of the Jefferson Airplane performing a piece from After Bathing and Baxter’s called “House at Pooneil Corners” — on a rooftop in downtown New York. Ringel says they had just performed the concerts that became the great live album Bless Its Pointed Little Head, which included Baxter’s material.

It’s really striking that they perform this fairly challenging minor-key song for a New York street public. However, the band sets up and sustains a strong groove, and vocalists Grace Slick and Marty Balin heat it up as only they can (Kantner is on the left, in glasses.).

It was too challenging for at least someone, who apparently called the police. They came and broke up the music and proceeded to arrest the members of Jefferson Airplane — arguably America’s best rock band at the time — apparently for disturbing the peace, for playing one song. They may not have had a performance permit for that New York roof. Watch it happen here.

Call it a quintessential moment of inspired 1960s rock anarchy.