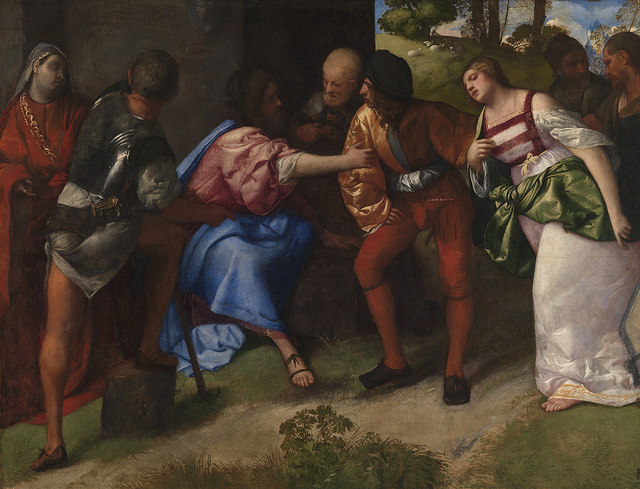 My good friend Ann had me pegged as a pure modernist partly for my obvious interest in
abstract art, which she saw in much of my own artwork done largely during my
undergraduate years.

But my art interests, as with music, range far, and I visited the Milwaukee Art Museum’s
recently closed Of Heaven and Earth: 500 years of Italian Painting from Glasgow Museums, 1 with great anticipation. Well more than a
handful of paintings impressed me, but notably Sandro Botticelli’s The Annunciation, Cavaliere d’Arpino’s Archangel Michael and the Rebel
Angels, Salvator Rosa’s magnificent paired historical landscapes
St. John Baptist revealing Christ to the Disciples and St. John the Baptist
Baptizing Christ in the Jordan, Carlo Dolci’s Salome, Antonio Mancini’s The
Sulky Boy, and Vincenzo Camuccini’s Death of Julius Caesar, each showing the artist’s depth of involvement in his art, wholly compelling as a historical and cultural story. 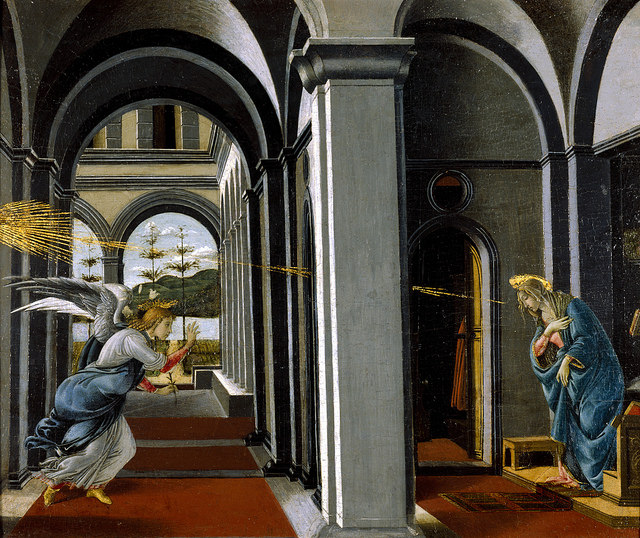 However, one painting utterly captivated me, above all.
And it has prompted more contemplation than any single work of art I’ve seen in quite some time: “Christ and the Adulteress” (c. 1508-10) by Titian (Tiziano
Vecellio).
It possesses great intellectual challenge for what it depicts and great
humanity and beautiful mystery, for how it depicts.

The show appears to have been curiously undervalued by Midwestern critics, from what I’ve read. I imagine resistance from the show’s extensive Christian subject matter especially in a time of such religious and secular polarization. Or perhaps the desire was for more contemporary and “relevant” art. One reviewer even commented that
the extraordinary painting by Titian provided little more than a
showcase of fine fabric.

First of all, it’s hard for me to imagine this great artist taking on such a subject as this painting without striving for all the power, human
drama and beauty he could muster.

Titian’s work does radiate an array of warm and cool textural splendor. But those
qualities reflect Titian’s sense of truth in beauty, or beauty as truth.
As a composition, this brims with eccentric form, in the figures’ situation and
interaction, and in how the shading and shadows create uncertainty and even muffled
tension.

Christ is seemingly seated, perhaps almost on the ground and he reaches out from a dark
corner to grab the arm of the Pharisee who has apprehended the woman.The official had
tried to trap Christ into refusing to support Mosaic law and demanded that the woman be
stoned to death.
We know the story for the pointed eloquence of Christ’s challenge:
‘Let he who hath not sinned, cast the first stone.”
This crucial moment helped seal Christ’s human fate. Yet, he exhibits, among other
things, an enlightened feminist perspective because we know that an adulterous man in
Jerusalem at the time hardly would be treated so.

I see Christ as one of the great humanists of his race, of history.
Frankly part of my motivation for writing this is also disappointment in my
having invoked Christ in a couple of recent blogs which received no responses, even given
their political subject matter — the notorious recent police killings of unarmed
black men, and Wisconsin Gov. Scott Walker’s recent “voice from God” telling him he must run for president.
I fear that too many of both my close and casual humanist friends — secular humanists
more precisely — resisted the contextualizing of socio-political matters
that invoked such a religious figure as Christ.

But I believe, as I think Titian does in this painting, that Christ was as great a human as
modern history provides, regardless of whether he was “the son of God.” A trope perhaps, but true nonetheless.
More to the point, he exemplified a human engaged in his time and society, the political zealot, the determined dissenter.
That’s the man I see in this painting, even though Titian cannily cloaked him in the
sublime shadow he still deserves.

For me, this was the single highlight of my art-viewing year. And this painting is such a stunning experience because of how it radiates in
human breath its beauty and verity. “Let he who hath not sinned cast the first
stone.”

One of the clearest pronouncements the man ever made also provides pause for
anyone reflecting on judgment of others. It is not, however, saying “cast no judgment
when it is due.” Christ pulled the woman aside and told her to “go and sin no more.”
He judged her a sinner, but forgave her and administered the most fundamental of
penances.

Another intrigue: This foreshadows Christ’s relationship with Mary of Magdalene, whom the
gospels characterize as a harlot, thus doubling up on his evident mercy towards
unholy women, which certainly could have been partially carnal attraction, on his part.
Mary Magdalene is the archetypal human sinner in Christ’s personal life and she’s so
overcome with gratitude for his mercy and love that she returns it, following him to his
crucifixion and grieving there with his mother.
Of course, pop culture’s most recent “bible,” The Da Vinci Code, bases its story on the
premise that Christ not only married Magdalene but survived the crucifixion and
raised a family. The evidence for this still appears quite dubious.

But who’s to say today? He may have given his life for Mary as much as for all. He was a man and I think most heterosexual men need a woman to inspire them, to make them better, as women like to think. The delicious irony is that a sinful woman could inspire such a holy man.

That partly explains the inspired moment in Titian’s telling of this painting’s story. The
adultress has no idea that this mysterious, kind and political man might spare her execution, as the painter shows us in her abject, despairing face and hands. Her true
judge determines she has suffered human-administered penance enough, unlike those
responsible for the Great Recession, who received “absolution but no penance”, as
Charles Pierce wrote in a January Esquire article about Barack Obama and America today.

Finally, as I’ve alluded to, the depiction of Christ himself is a masterpiece of deft
understated evocation. His arm is oak-branch firm, as if reaching out
from heavy undergrowth — to stop the Pharisee in his tracks, a sort of force of
human nature. Also the entwining extension and contortion of Christ’s body adds up to a
superbly paradoxical configuration, a way of balancing composition that is filled with
grace and yet forthright and assertive. His head is magnificently shadowed and he
remains a man of abiding mystery. The painting’s asymmetry and peek-a-boo handling
of space are quite modernist.

Most of all, I see Christ the road preacher as a great humanist. If the painting has the
hint of romance, it speaks to a question that Leon Wieseltier addressed in
his essay in the January 18 book review of The New York Times titled “Among the
Disrupted.” He began by commenting on how “the greatest
thugs in the history of the culture industry have destroyed our bookstores and
record stores” and refers of course to “all the miracles of electronic dissemination,” and
how “writers hover between decent poverty and an indecent one; they are expected to render the fruits of their labors for little and even for nothing.” And “all the technological
miracles somehow do not suffice for compensation, either the fiscal or the
spiritual kind.” Weiseltier bemoans, in a cool, almost Olympian manner, the
quantification of quality, among other problems that the digital revolution has
engendered.
But his greater subject the looming fate of humans. He asserts that, “For a start,
humanism is not the antithesis of religion,” something Pope Francis is now superbly
demonstrating.
Defying much rusty dogma, the current Pope is doing a pretty damn good impersonation of Christ, as any Pope should strive to. And he does it with the unlikely humility that
Christ exhibited.

And Wieseltier’s closing speaks superbly to this question of humanism which articulates
itself as romance, in the subtext of Christ and Mary Magdalene, or in his ready grace-
giving to the adulteress.

“Is all this — is humanism — sentimental?
But sentimentality is not always a counterfeit emotion. Sometimes sentimental is
warranted by reality. The persistence of humanism through the centuries, in the face a
formidable intellectual and social obstacles, has been owed to the truth of its
representations of our complexly beating hearts, and to the guidance that it has
offered, and its variegated and conflicting versions, for a soulful, sensitive existence.
There is nothing soft about the quest for a significant life. And a complacent humanist
is a humanist who was not read his books closely, since they teach disquiet and
difficulty.
“In a society rife with theories and practices that flatten and shrink and chill
the human subject, the humanist is the dissenter.”

And in Titian’s wondrous painting, Christ the great humanist dwells in subversive shadows, an authentic dissenter against hidebound, oppressive morality.
As he was throughout his public life, which Reza Aslan makes abundantly clear in his
provocative book Zealot: The Life and Times of Jesus Christ of Nazareth which I
recently referenced a couple of times, apparently to the dismay of some silent humanists. Aslan is not alone: an unacknowledged prototype for his book is Jesus the Heretic: Freedom
in Bondage in a Religious World by Douglas Lockhart. That book offers a more in-depth
reading of traditional Christian teachings but identifies Christ’s as a man who told the
most uncomfortable religious and political truths of his time.
The Romans crucified him as a heretic. In his time, this disrupted man disrupted right
back.

1.  I regret not having seen and written about this show earlier. But it will run from February 6 to May 3 at the Santa Barbara Museum of Art, California, under a somewhat more secular title: Botticelli, Titian and Beyond: Italian Masterpieces from the Glasgow Museums.

The show catalog is available at the Milwaukee Art Museum www.mam.org