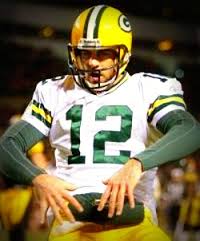 Okay you doubting culture vultures, I post this post to prove that Aaron Rodgers knows how to play the comedian, even right in the middle of a big game. But he doesn’t have to do it with buffoonish, look-at-me displays of himself (though some TD dances are pretty cool, I’ll admit).

Of course, we know he’s gotten plenty of shit back about his (“Hey Rod-gers, discount double check!!”) champion belt move. 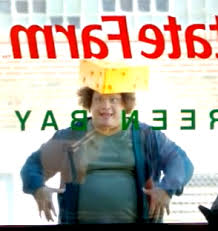 However his “pump up” commercial with “Hans and Franz” is one of the funniest ones on TV right now, ya!: https://www.youtube.com/watch?v=WxjCJxfECD8 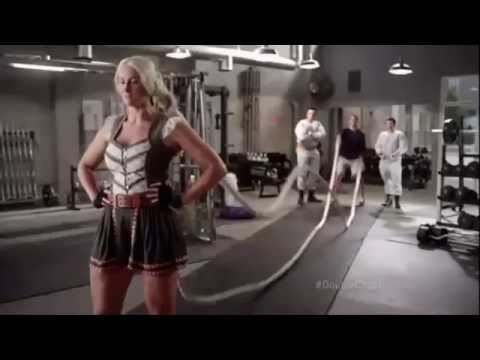 A-Rod “pumping up” for Hanz and Franz with his “puny arms.” Courtesy article. wn. com

Nevertheless, he’s now much more subtle, the sign of a deft comedian.

The first video, from Sunday’s divisional-round win against the Dallas Cowboys, shows Aaron Rodgers’ unsurpassed coolness, even in the middle of a huge, tough game — so he can have fun. Earlier in the season, he slyly mimicked Bears’ QB Jay Cutler puffing a cigarette while lining up for the hike, because cameras have caught Cutler smoking cigs on the sideline during a game. (Caution: Cigarette smoking may be hazardous to your starting position.)

Here, Rodgers pretends to change the play call at the line by shouting out “New York Bozo! New York Bozo!” I’m sure he’s aware that TV mikes now pick up all of these line-of-scrimmage QB check-offs. So he’s being entertaining — he knows he’s got a few seconds to play around with. I laughed out loud when he did it. Of course, the Cowboys didn’t know he’s not changing the play — the true functional beauty of his goofy inspiration.
https://vine.co/v/OD7rzO0am1F
Afterwards, Rogers said that “obviously (the phrase) didn’t mean anything at all.” He’d be a slick bluffer in a poker game. Actually, you’ll notice Eddie Lacy and John Kuhn switch to new positions when Rodgers says it, so he may be bluffing the public, to not tip off a real signal, methinks.
Sportswriter Jason will be has the best interpretation so far: New York bozo is cravenly political New Jersey Gov. Chris Christie, who was Dallas cowboy owner Jerry Jones’ big-faux good luck charm, up in his luxury box. “New Jersey bozo” was too obvious so Rogers slipped into the ether of incantation. Plus logically New Jersey and New York are the most symbiotic states in America. So to put it in African terms, Christie’s “juju,” turned into a big pile of juju bees, and just added another inch to his rotund waistline. The Cowboys sort of lost the game by an inch when Dez Bryant bobbled the ball. We all know it’s a game of inches.
http://www.nj.com/giants/index.ssf/2015/01/watch_chris_christie_hug_of_dallas_cowboys_owner_reenacted_by_green_bay_packers_fans.html 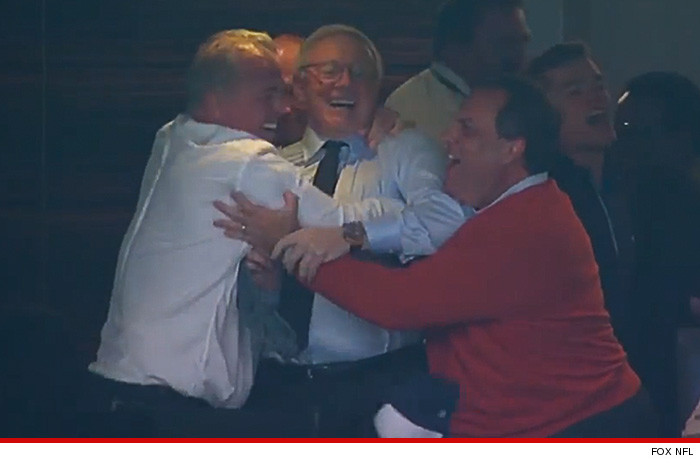 Chris Christie in red, Jones is the sandwich meat. twz.com
The second video shows Rogers’ actual football artistry at its peak. While rolling to his left on his injured left leg — he rifles a stunningly pinpoint pass between the converging hands of two Cowboy defenders — to Richard Rodgers for the game-winning touchdown. The play kills me every time. (On these highlights, scroll down to “A. Rodgers threads the needle to R. Rodgers.”) http://www.packers.com/news-and-events/article-1/Full-Highlights-Packers-defeat-Cowboys-26-21/d6e6f1a2-bc6d-4ee6-a0e8-b3b8de673384
I doubt he could’ve zipped that pass in there without all of the “pumping up” he did with Hans and Franz. We know about all the tough, strong Germans in Wisconsin, especially in Brewtown.
To me, that pass is comparable to Sam Shields’ amazing recovery interception — after being “beaten” — of Tony Romo last year against the Cowboys, which you might recall.
________
Thanks to my friend Eric Shumacher-Rasmussen for FB posting the video of A-Rod’s “New York bozo” routine.  That lucky bozo was at the game yesterday with, in due time, about 1 million other people.